Smoothies may be the first thing you think of when you think of a blender, and there are plenty of models designed and advertised specifically for turning frozen fruits and vegetables into smooth, healthy beverages. Some blenders do a much better job than others when creating a pleasant, uniform texture.

For each blender that we test, we make a smoothie in each of its jars that hold eight ounces or more, so you can get an idea of how the blender handles fibrous ingredients like raw kale and harder foods, like frozen banana chunks.

If you like smoothies, then you'll want to know how a blender performs when it comes to blending common smoothie ingredients into a cold, silky drink. Also, while we don't specifically test each blender's performance when making foods like soup or sauces, the smoothie tests can give you an idea of how well a blender incorporates fibrous vegetables like kale into a smooth blend. However, since we don't add ice to our smoothies, it's good to keep in mind that you may get different results than ours if you add it to your mix. 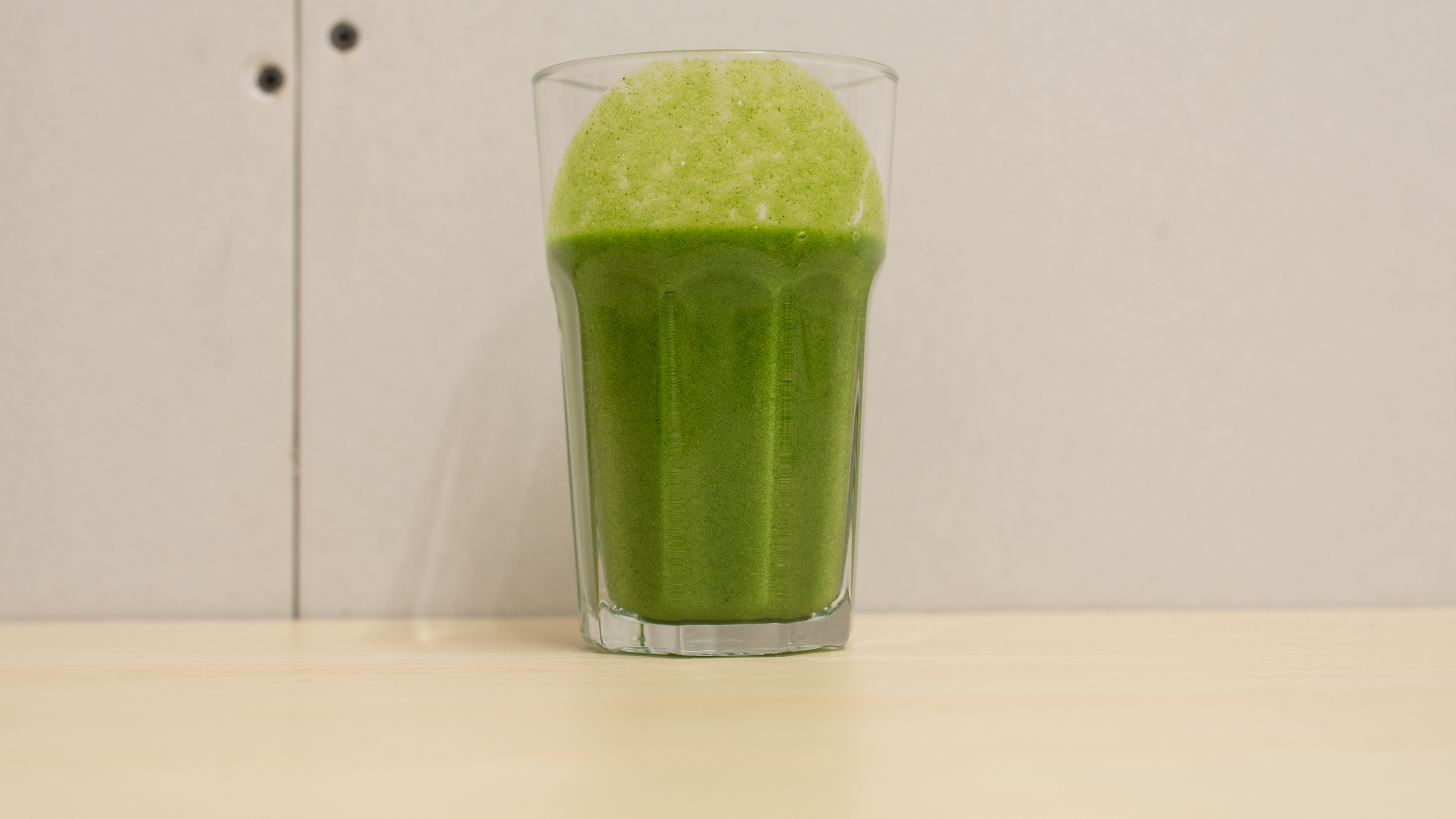 The Ninja Foodi Power Nutri DUO makes fantastic smoothies in either of its personal jars.

For these tests, we make a smoothie in each jar that comes with the blender. We use the same ingredients for each smoothie: 40 grams of kale (plus or minus 2 grams, with the central stems cut out), 100 grams of frozen banana chunks (plus or minus 10 grams, cut into 1 to 1.5-inch pieces, if necessary, to fit in the jar), and a 1/2 cup of orange juice. We add the ingredients to the jar in that order. When testing immersion blenders, we use the provided beaker, if possible, or use our own OXO beaker if there isn't one.

We set up a camera to record the process, and we use a stopwatch to time how long it takes for the blender to process the ingredients. If there's a smoothie preset or other suggested settings from the manufacturer, we follow those instructions. Otherwise, we set the blender to the speed closest to or just under 24000 revolutions per minute (RPM), which is often the highest speed setting. We stop the blender when the ingredients seem fully processed and smooth, when the texture doesn't seem to be getting any better, or after a maximum of five minutes of blending in total. We also respect any maximum run time set by the manufacturer.

After making a smoothie in each of the jars that come with the blender, we record the results for 'Best Jar' and 'Other Jar'. The scores are subjectively assigned and based on the preparation time and the texture of the smoothie. The 'Best Jar' is the one that makes the best smoothie according to those criteria, not necessarily the blender's main or largest jar. The 'Other Jar' is the whichever one makes the second-best smoothie.

The lowest-scoring blenders take a long time to make smoothies, and the texture is usually foamy, grainy, or leafy, like the NutriBullet GO or the Hamilton Beach Power Elite Multi-Function. The blenders that score the best make smooth-textured drinks generally process ingredients in less than one minute, like the Ninja Foodi Power Nutri DUO or the Vitamix Explorian E310. When choosing the score, we also consider the performance of other blenders to ensure consistency in our scoring process.

What it is: The jar used to process the fibrous ingredients.

For the Smoothie (Best Jar) and Smoothie (Other Jar) tests, we record what jar was used. The best jar is the one that produced the highest-scoring smoothie based on preparation time and texture. The possible results are the main jar, additional jar, or standard 1000 ml beaker (which we use for immersion blenders that don't come with their own). The 'other jar' is the one that produced the next-best smoothie. If there are more than two jars included, we only give a score to the top two that made the best smoothies. That said, we still describe the results from the rest of the jars in the Smoothie (Other Jar) text. Some full-size blenders come with extra jars, like the 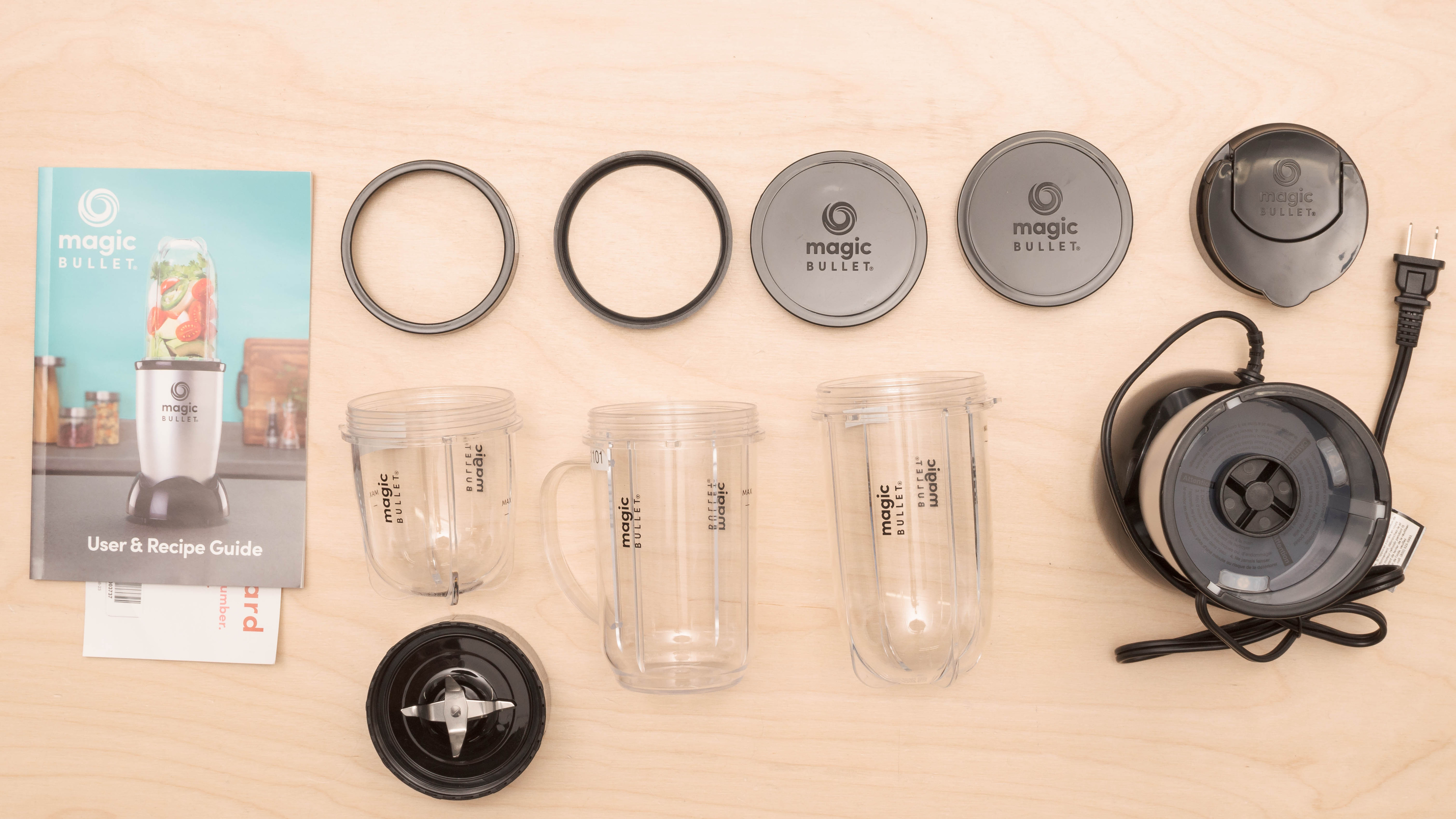 This result isn't as important when blenders only come with one jar, but many models come with several jars in different sizes. We exclude jars with a capacity equal to or less than eight ounces and accessories meant for different purposes, like the food processor bowl that comes with the Ninja Mega Kitchen System BL770.

Often a full-size blender makes its best smoothie in one of its smaller personal jars, which usually have a capacity of roughly 10 to 25 ounces, instead of in its bigger main jar, which usually holds at least 48 ounces. This may be due to the quantity of the ingredients we use in our smoothie recipe. We use the same quantities regardless of the size of the jar being tested, which often leaves a lot of space in bigger jars, and ingredients can get flung up the sides of the jar instead of sucked into a vortex. The difference in smoothie quality can be major, so if you want a full-size blender that makes a good smoothie in its main jar, it's a good idea to check which jar was used to make the best smoothie. 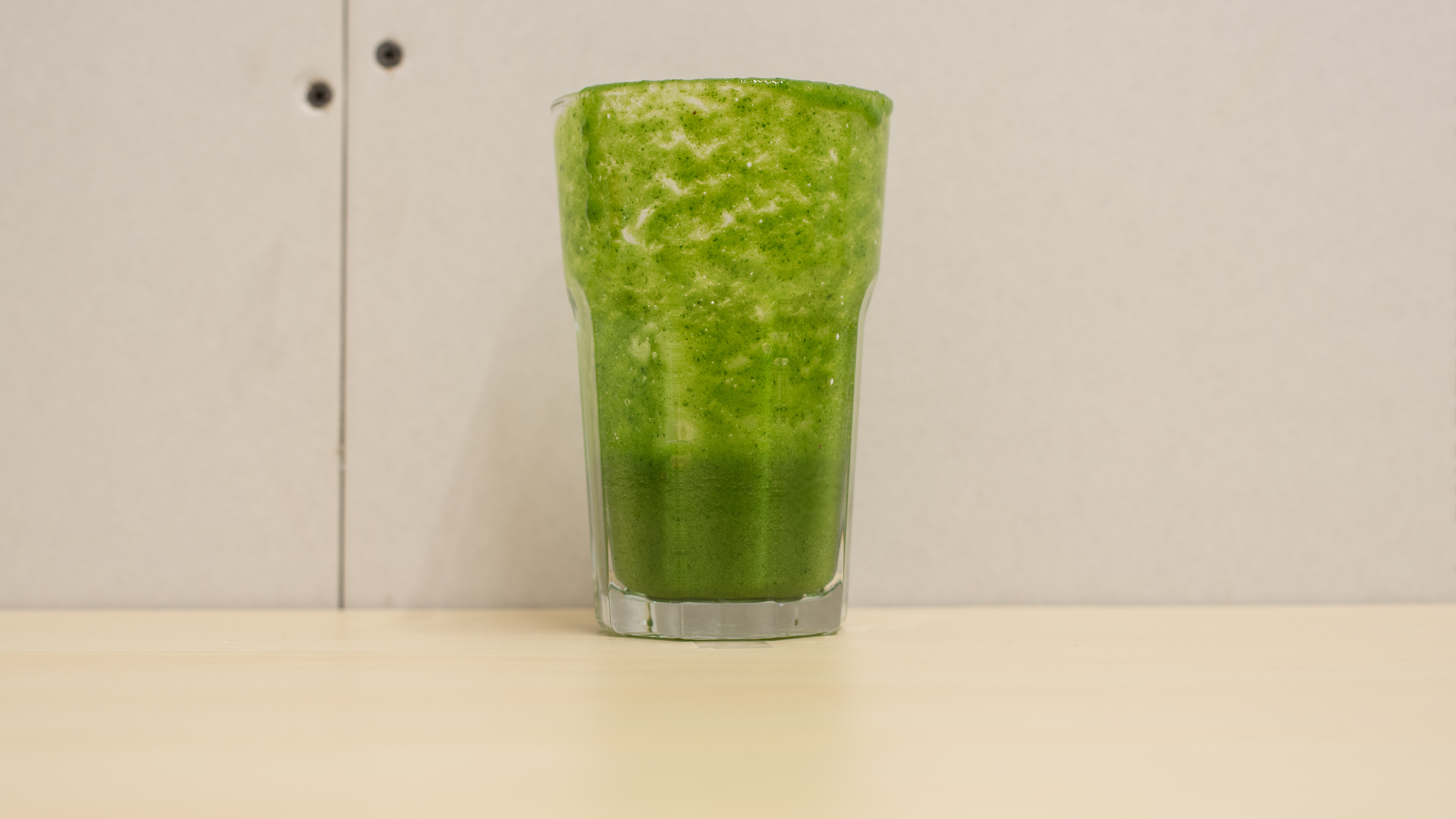 The Ninja Professional Plus Kitchen System with Auto-iQ makes an impressive smoothie in its 24-ounce personal jar.
The same blender makes an alright, foamy smoothie in its 72-ounce main jar.

For this test, we note how long it took to blend the smoothie in both the best jar and other jar (if applicable). We take the time from the stopwatch and round up to the nearest minute, or we check the video if there's any doubt about when the ingredients were finished processing.

If a blender has a maximum run time, we follow the manufacturer's instructions and include the time that the blender had to rest in the total time. For example, the NutriBullet Immersion Blender is only meant to run continuously for one minute at a time. The result of < 3 minutes for the smoothie preparation time includes one-minute cycles with a few seconds of rest between. For full-size blenders, a good preparation time is less than roughly two minutes. Immersion blenders are expected to take longer, so roughly three minutes is considered normal. We run the blender for five minutes at the most.

What it is: The texture of the smoothie. Not all blenders perform the same; some can inject too much air in the preparation and make foamy smoothies, some have difficulties processing kale and end up grainy.
When it matters: When you want a silky smoothie.

The finished smoothie is poured into a tall glass. We pour a bit of smoothie out so you can see its texture on the side of the glass. We then take a sip of the smoothie to evaluate its texture and check the blender for unprocessed kale. A smoothie can be one of five textures: smooth, foamy, grainy, foamy and grainy, or leafy. 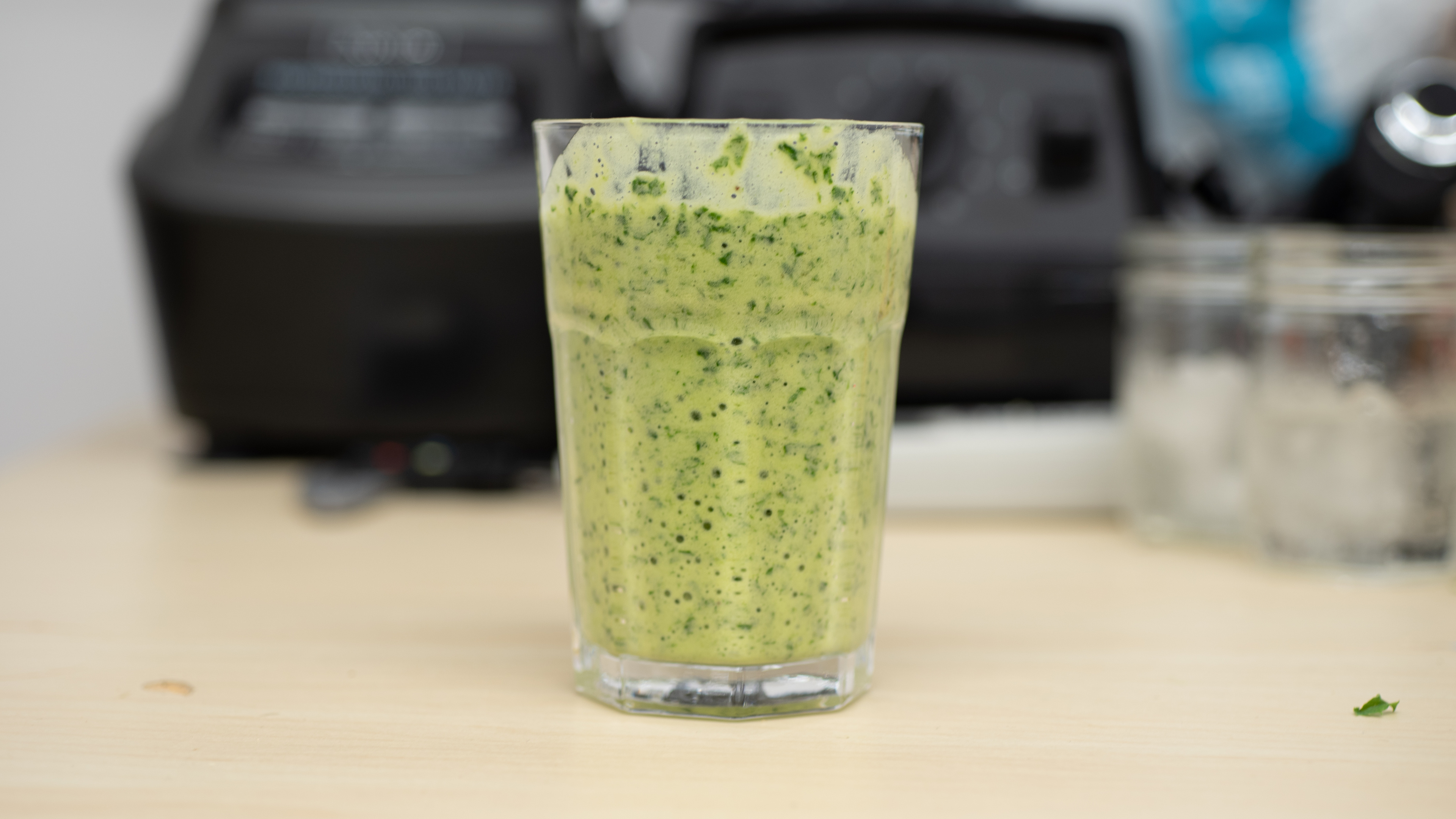 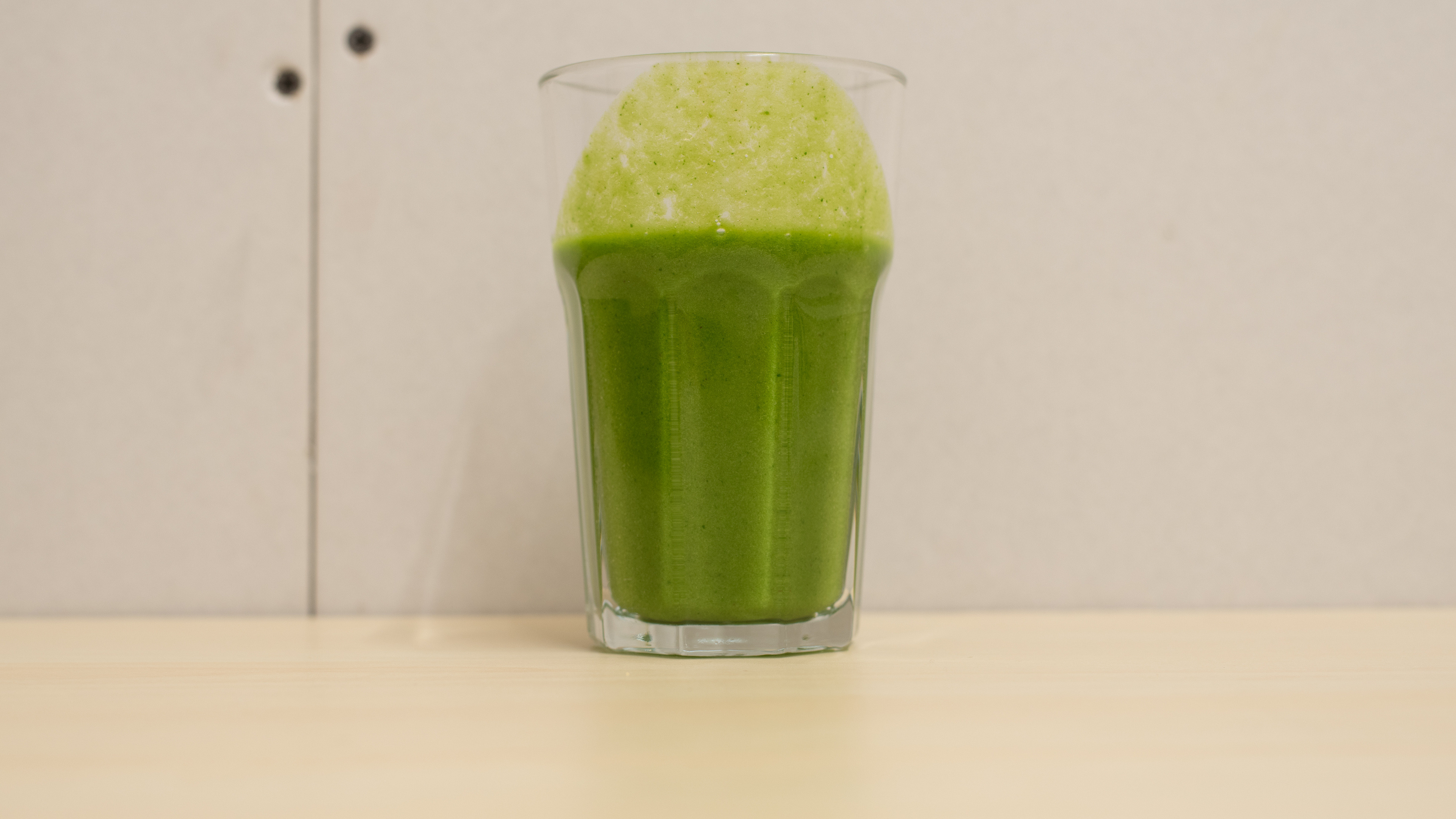 A foamy smoothie usually means too much air was introduced to the ingredients during blending, resulting in a frothy mix. A grainy smoothie means the blender didn't fully liquefy the kale, while the leafy descriptor is for blenders that leave bigger chunks of kale behind. A result of 'Not Intended Use' means we didn't perform the test with a particular jar because its capacity is less than eight ounces, and no score is assigned. We also note other details about the smoothie and our experience making it, like if friction from the blades warmed up the ingredients or if we had to shake the jar to get everything blended thoroughly.

Our smoothie recipe doesn't include ice. We test each blender's ice crushing performance separately, and you may want to take a look at those results if you like to add ice to your smoothies. However, that test measures how well the blender can crush ice on its own, not when mixed with other ingredients such as liquids. It may not reflect how well a blender handles ice when it's included in a smoothie recipe. Some blenders, like the NutriBullet Blender Combo, aren't intended for crushing ice unless it's mixed with a liquid too.

The smoothie tests can give you an idea of how well-suited a blender is for making smoothies with typical ingredients. If a blender comes with more than one jar, you can see which two work best for smoothies and compare the results. It's good to keep in mind that not all blenders are intended for making smoothies; an immersion blender that makes a disappointing smoothie may perform better when blending cooked vegetables, although we don't have a test for that currently. Also, if you don't put leafy greens in your smoothies, you may not require a blender that can fully liquefy this ingredient.