Your browser is not supported or outdated so some features of the site might not be available.
Best
Smoothies Blenders Immersion Personal Cheap Ninja Vitamix Protein Shake Crushing Ice Frozen Drinks Bullet Under $100
73
Blenders store-bought and tested, supported by you via insider access, and when you purchase through links on our site, we may earn an affiliate commission.

By Theresa Ketterling
What it is: The spinning rate of the blender and how it's controlled.

Blending speed seems like an important specification for any blender, but you rarely see a model's exact blending speed advertised in a way that makes it possible to compare between models. For these tests, we measure the highest and lowest blending speed of each blender in revolutions per minute (RPM). We also check for some other features that could be deal-breakers, depending on how you use your blender. Since the best result depends on your preferences, we don't score these tests.

While a blender's minimum and maximum speed don't necessarily predict its performance, this information can help you decide if it's right for your needs. If you mainly want to make silky smoothies, a blender with a single high-speed setting like the NutriBullet Pro+ or the Breville Boss To Go Sport can work well. However, many recipes for foods like dressings and mayonnaise call for a slow starting speed, so if you want a versatile machine, you may be looking for a blender with a broad range of speed settings, like the Vitamix A2500 or the Blendtec Classic 575. You may also want to consider how loud a blender is if you use it often or want to avoid bothering others at home. If a blender has more than one jar, we test the maximum and minimum speeds with the main jar only.

In these tests, we measure the maximum and minimum speed of the blender. We also describe the basic controls, like whether it has buttons or a dial to adjust the speed, if there’s a pulse mode, and if it has an on/off toggle. Finally, we also measure how loud the blender is when it’s running at top speed.

What it is: The slowest measured speed the blender can achieve.
When it matters: When you want to make certain things such as mayonnaise, that won't emulsify at too high a speed.
Good value: < 3000 RPM

We test the minimum speed of each blender using a tacheometer, a tool that counts the revolutions of the blades per minute. We use the main jar for this test. First, the blender is unplugged, and we cover the area behind the blades with black gaffer tape. We wrap reflective tape around the flattest one. If the rest of the blades are shiny, we may also color them black with the dry erase marker. This is because the tachometer uses a laser, and the reflective tape helps ensure that it can target one blade and count its revolutions.

Pointing the tacheometer at the black markings behind the blades, we run the blender for one minute at the lowest possible speed. The tachometer provides the revolutions per minute (RPM); we round the number down to the nearest 100 RPM for our results. The higher the value, the faster the blades spin, which corresponds with a higher blending speed. 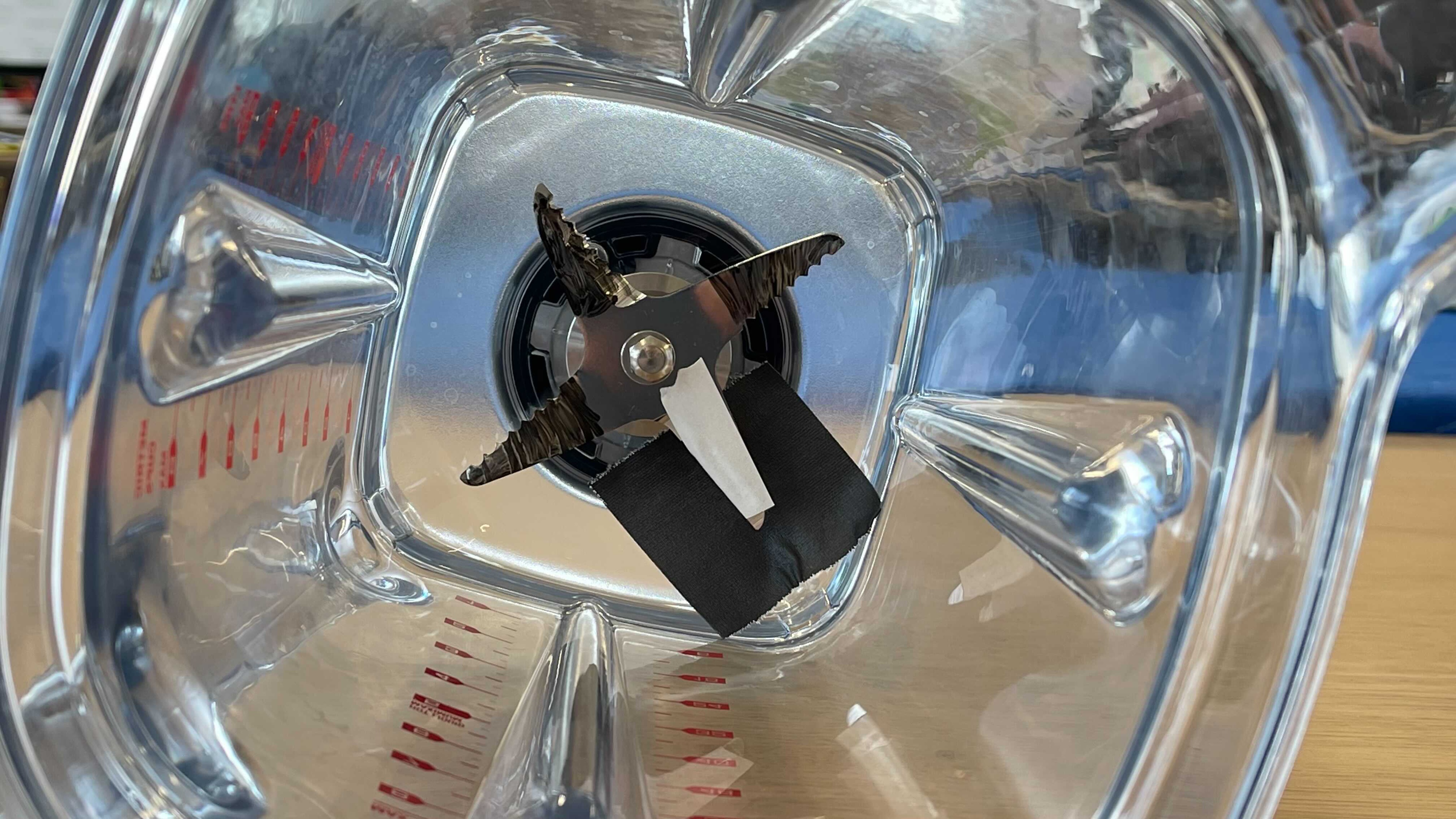 A blender with reflective tape on one of the blades for the speed tests. 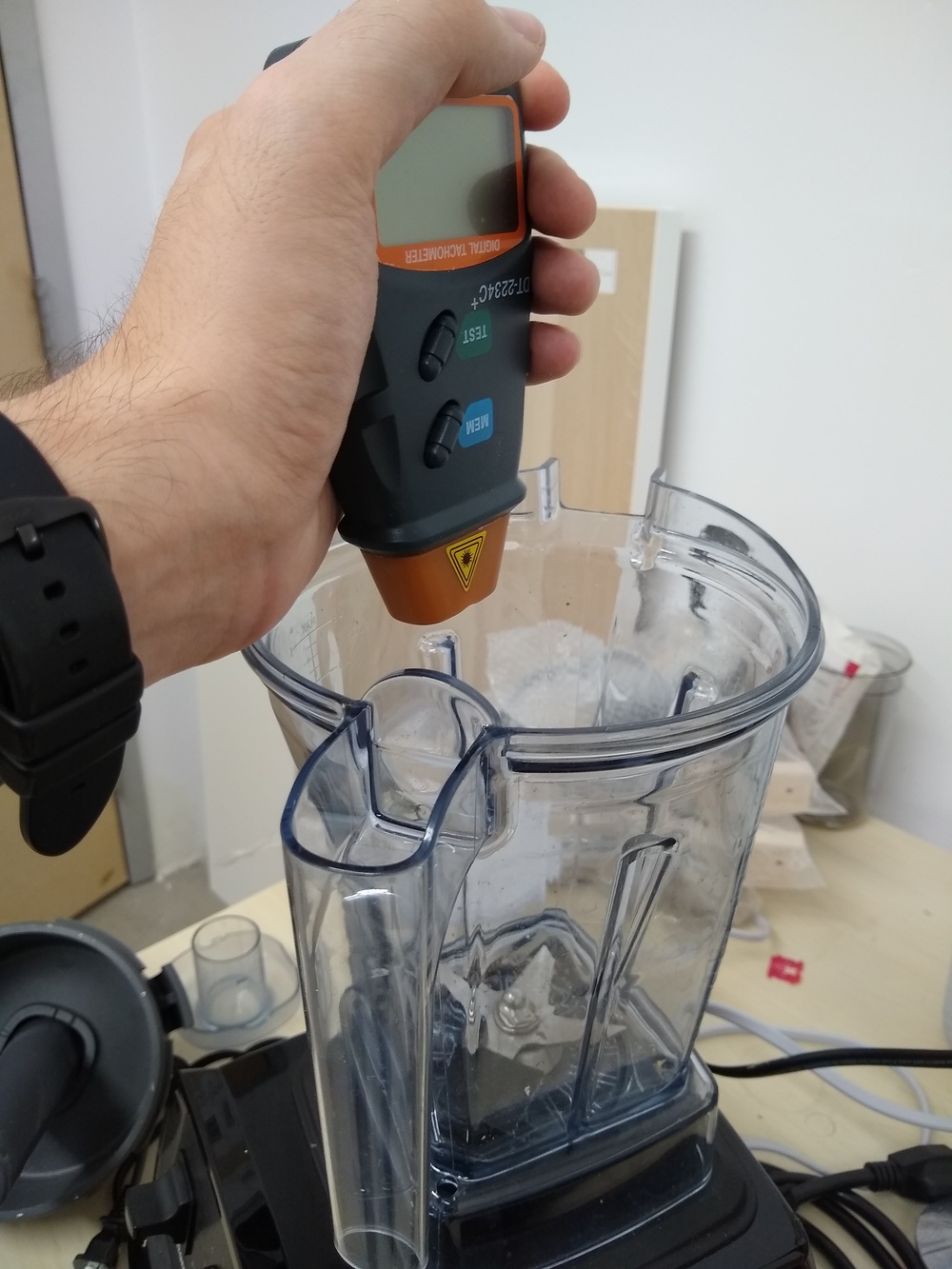 Blending speed is measured with a tacheometer.

You may be looking for a blender with a slow low-speed setting if you use your blender to emulsify ingredients like salad dressings or sauces, or if you want to be able to chop ingredients into smaller pieces without pureeing them. It can also be helpful to start blending at a lower speed when you're working with tough ingredients like nuts. For example, the Vitamix A3500 makes very smooth almond butter when you start at the lowest speed setting and gradually increase the blending speed.

What it is: The highest measured rotations per minute the blender can achieve.
When it matters: When deciding what to make. For most things, sharp blades past 17000 RPM is overkill.
Good value: >15000 RPM

The maximum speed test is performed the same way as the minimum speed test. Using the same markings and tape, we run the blender for one minute at top speed, then round the measurement down to the nearest 100 RPM.

You may want a blender with a fast top speed if you make lots of smoothies with fibrous ingredients like kale, which can be harder to fully process at a lower speed. Similarly, a fast blending speed can help achieve smooth nut butter, sauces, and purees. Also, some blenders' blades spin quickly enough that the friction can heat cold ingredients, which can help make foods like soup or hot chocolate.

What it is: Whether the blender is equipped with a dial, allowing the user to control the blender speed.
When it matters: It helps you achieve the desired consistency by fine-tuning the speed of the blender.

For this test, we check if the blending speed is controlled with a dial and record the results as Yes or No. This is important because a speed dial allows you to fine-tune the blending speed as you blend. It’s most common for full-size blenders, like the Vitamix Explorian E310, to have a speed dial, while personal blenders like the NutriBullet Pro are usually single-speed and don’t have one.

There doesn’t necessarily need to be a literal dial for a blender to be scored ‘Yes’ in this test. For example, the KitchenAid Variable Speed Corded Hand Blender blends faster the harder you push on the trigger button, which counts as a speed dial because it allows you to adjust the speed incrementally. 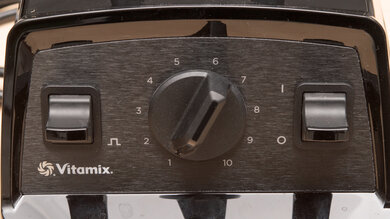 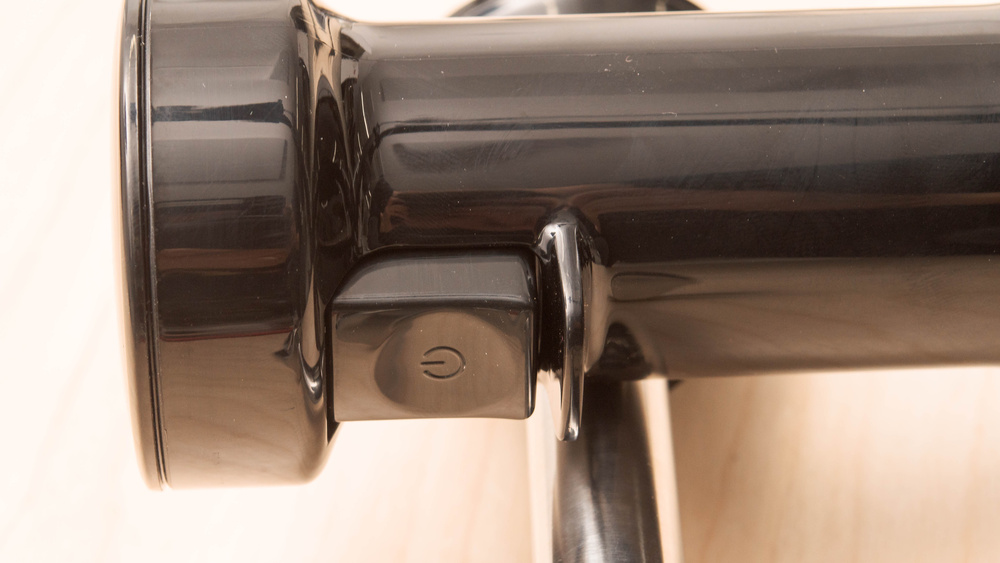 The KitchenAid Variable Speed Corded Hand Blender has a pressure-sensitive button that counts as a speed dial.

What it is: Whether the blender can run for short bursts.
When it matters: Pulsing helps chop larger and harder food before starting the actual blending process.

This test determines if the blender has a pulse or turbo mode that allows you to run the blender in short bursts. Some blenders have a dedicated pulse mode, but we also check if it’s possible to simulate a pulse mode by quickly turning the blender on and off. The result is recorded as a Yes or No since we don't test how the blender performs with pulse mode.

This feature helps break down big chunks of ingredients, like ice cubes and bigger frozen fruits like whole strawberries. The Ninja Blender Duo with Auto-iQ BL642 makes fantastic almond butter if you start with pulse mode before blending normally. You can also use pulse mode when making foods like hummus or salsa to avoid over-blending.

What it is: The noise produced by the blender at its highest RPM from a distance of 15 inches.

You may want to know your blender's noise level if you tend to make a lot of blended food or if you share the space with others. For this test, we use a decibel meter to measure how much noise the blender makes when set to its fastest speed setting, excluding turbo or pulse mode. After the blender has run continuously for one minute, we take the reading from roughly 15 inches (40 centimeters) away, which is about the distance between your ears and the blender in normal use.

Immersion blenders like the Bamix Mono M133 and the Bamix The Original are some of the quietest blenders we've tested. In contrast, full-size and personal blenders vary a lot in terms of how loud they are. Full-size models Blendtec Classic 575, as well as smaller personal blenders like the Ninja Foodi Power Nutri DUO and the NutriBullet Pro+, are among the loudest we've tested. There are even some blenders that are equipped with a noise dome to help reduce the noise.

What it is: Whether the blender has an on/off switch or button. The blender won't function until the switch is flipped, opposite to blenders without a switch that are able to be used without that extra safety step as soon as they're plugged.
When it matters: When you're worried about safety. This helps with safety and prevents the blender from being accidentally activated when plugged into an outlet.

For this test, we record if the blender has an on/off button or switch that needs to be activated before the machine will start. Full-size blenders are more likely to have this extra safety feature, and personal blenders usually lack this feature altogether. However, some blenders have other design features that stop you from turning them on accidentally. The NutriBullet Pro doesn’t turn on until the jar twists into place, and the battery-powered BlendJet 2 has a locking mechanism. These features aren't counted as on/off toggles, however.

The best result in these tests depends on what you're looking for and how you use your blender. If you make a lot of different recipes, it may be helpful to look for one that has a wide range of speeds and a speed dial allowing you to manually make adjustments. Some blenders that don't have a dedicated speed dial do have different modes and presets that run the blender at different speeds, which you may prefer. Also, performance depends on many other factors, like the design of the blades and the shape of the jar, so if you want to see how the blender performs for certain purposes, you can also look at our performance tests.