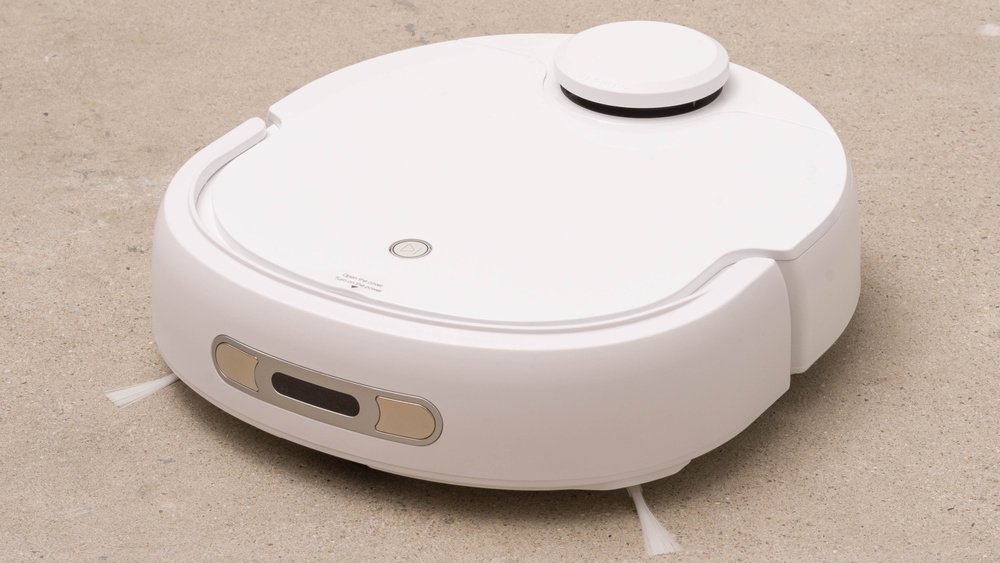 The Narwal T10 is a uniquely designed hybrid robot mop/vacuum. It comes with separate mopping and vacuuming modules, which can be swapped out for one another very easily. Unlike many other robot vacuums/mops, its mopping pads actually move, as opposed to being static cloths. Its docking station cleans and dries its mopping pads, so it shouldn't track dirty water around your home while mopping. It also feels very well-built and has long battery life. Unfortunately, while it performs well on bare floors, its lack of a brushroll means it isn't a particularly good fit for vacuuming carpets.

The Narwal T10 is decent for bare floors. It has no trouble clearing pet hair or small debris like rice, though bulkier material like cereal can clog its small suction inlet. It feels well-built, offers superb battery performance, and maneuvers itself fairly effectively overall. While its mopping performance doesn't currently factor into our score set, the mopping module is easy to install, and the vacuum does a good job of covering its assigned area.

The Narwal T10 is mediocre for low-pile carpet. It struggles with pet hair, and its lack of a brushroll means that it has a very hard time cleaning debris like sand or baking soda from this surface type. That said, it does feel amazingly well-built and has a very long battery life, so it should be able to clean large spaces without running out of charge.

The Narwal T10 is a sub-par option for cleaning high-pile carpet, though this isn't its intended use case. It doesn't have a brushroll to agitate carpet fibers, so it struggles with sucking up pet hair, fine debris like baking soda, and larger material like sand. It can also sometimes struggle to climb onto higher-pile carpets and occasionally gets stuck on rug tassels.

The Narwal T10 is disappointing when it comes to dealing with pet hair. While it has no issue dealing with pet hair on bare floors, it delivers poor pet hair cleaning performance on low and high-pile carpet due to the lack of a brushroll. Conversely, the absence of a brushroll means that you don't need to worry about hair wraps, and it has an onboard HEPA filter to trap allergens as it cleans.

The Narwal T10 is a robot vacuum and isn't meant for cleaning stairs.

The Narwal T10 is a robot vacuum and isn't designed to clean the inside of your car.

The Narwal T10 is amazingly well-built. It's made of high-grade plastic that looks and feels premium. The glossy top cover can be removed to let you access the dirt compartment and the power button. Unlike most robot vacuums, it doesn't have a brushroll and instead uses twin side brushes to direct debris into a suction inlet. The side brushes are part of an vacuum module that can be easily removed and swapped with a mopping module for use on bare floors. The vacuum itself feels quite sturdy for the most part, though the small internal dustbin could break if you were to drop it. Its base station is also solidly-built and features an LED screen that shows the vacuum's current status.

Out-of-the-box setup is quite easy, though you should download its companion app to access its full capabilities.

The Narwal T10 has quite a few maintenance needs.

Note: We don't currently test the vacuum's mopping capabilities, so the maintenance requirements of the following parts don't factor into our assessment of user maintenance.

Any part washed with water should be allowed to dry for at least 24 hours before being put back in the vacuum.

The Narwal T10 has a few recurring costs.

Note: We don't currently test the vacuum's mopping capabilities, so the costs incurred by replacing the following parts don't factor into our assessment of recurring costs.

The Narwal T10 has excellent storage capabilities. While the docking station is somewhat large, the vacuum is stored almost entirely inside it, reducing its overall footprint.

The Narwal T10 has a small internal dustbin. It needs to be emptied more frequently than other robot vacuums like the Roborock S7. On the other hand, if you plan on using its mop attachment, its external clean water tank has a fairly large capacity of 1.25 gallons, so you shouldn't need to refill it very often.

The Narwal T10's range is limited only by the room left in its dirt compartment and its remaining battery life. However, it can't climb or descend stairs.

The Narwal T10 is quite portable. It weighs slightly less than alternatives like the Roborock S7, though it doesn't have a carrying handle to make it easier to pick up and carry.

The Narwal T10 has a couple of quality-of-life features. Aside from its mopping capability, it has two suction power levels that you can change through its companion app: the default 'Normal' mode and the high-power 'Strong' mode. The base station also has a small LED screen that shows the vacuum's current task, an estimate of remaining time until completion, battery life, and whether or not you've enabled the child lock.

The Narwal T10 has a vacuum module with two side brushes that direct debris into the path of its suction inlet, and two spare side brushes are included. You can swap out the vacuum module for the mopping module, which comes preinstalled with two mopping pads. It also comes with two extra mopping pads. There's also a magnetic strip you can set down on the floor to prevent the vacuum from entering certain areas and a hook blade tool to remove any stuck-on debris from the side brushes.

You can configure the Narwal T10 as a robot mop by detaching the vacuum module and fitting the mopping module in its place.

The Narwal T10 has good performance on bare floors. It's very effective in dealing with pet hair and smaller debris like rice. However, its lack of a brushroll and comparatively small suction inlet can result in bulkier debris like cereal getting stuck and clogging the opening.

The Narwal T10 performs inadequately on low-pile carpet. Due to its lack of a brushroll, it can't provide the necessary agitation to dislodge pet hair or large and fine debris like sand or baking soda from carpet fibers.

The Narwal T10 has poor performance on high-pile carpet. It clears very little in the way of pet hair, and the lack of the brushroll means that it doesn't have the necessary means of working material like sand and baking soda free of carpets.

The Narwal T10 is good at maneuvering itself. It begins cleaning by moving around the perimeter of the room before vacuuming small sections of its coverage area. Swapping between the mopping and vacuum modules is easy and only takes a couple of seconds. It's also small enough to fit under tables and chairs, though only just. Unfortunately, it can struggle to climb onto high-pile carpets, and rug tassels can get caught on its side brushes.

Its mopping capability is quite impressive, as it cleans its mopping pads throughout its cleaning job rather than tracking dirty water around your house and has an air-drying system built into its docking station to prevent mildew buildup on the pads. However, while the vacuum can recognize which module is in use, it's still important that you set up the included magnetic strips around carpets or any other surface you don't want to get wet. You can see a video of its mopping maneuverability here.

This vacuum has amazing automation features. You can control the vacuum without the use of its companion app by using the control button, though you can only adjust its suction power mode through the app. The app itself is very easy to use, and the vacuum draws a map of its coverage area as it progresses through its current task. You can use the app to set up no-go zones, set up individual cleaning areas and sequence cleaning sessions, check the vacuum's battery status, and enable or disable the child lock.

The Narwal T10 is only available in one variant: White, and you can see our test unit's label here.

Let us know in the discussions if you come across another variant of this vacuum, and we'll update our review.

Compared To Other Vacuums

The Narwal T10 is a premium hybrid robot mop/vacuum. Unlike other hybrid robot vacuum/mops like the Roborock S7, this vacuum doesn't have an onboard water reservoir for wetting its mopping pads. Instead, it periodically returns to its docking station, which sprays its mopping pads with clean water from an onboard reservoir, cycles the waste water to a separate tank, and air dries the pads to prevent mildew buildup, which should reduce hands-on maintenance requirements. However, to accommodate its easily swappable vacuum module, it doesn't have a brushroll, so its performance on carpets is poor overall.

The Narwal T10 and Roborock S7 each have their advantages, meaning one may suit you better than the other, depending on your needs. The Narwal has a more advanced mopping system, with cloth pads that rotate and agitate the surface they're on, as well as a unique self-cleaning system built into its docking station. It also charges faster, though the Roborock does have a slightly longer battery life. In addition, the Roborock does a better job of vacuuming debris on bare floors as well as low and high-pile carpet and can maneuver itself more effectively.

The Ecovacs DEEBOT OZMO T8 AIVI is a better robot vacuum than the Narwal T10. The Ecovacs incurs fewer recurring costs, is easier to store, and delivers superior vacuuming performance on all surface types. Unlike the Narwal, it's advertised as being capable of vacuuming and mopping simultaneously. While the Ecovacs does have a longer battery life, the Narwal can charge in less than a third of the time. The Narwals mopping system, with its rotating pads and self-cleaning system, is also significantly more advanced than the Ecovacs' onboard water reservoir and static mop cloths.

The Roborock S6 MaxV is better at vacuuming than the Narwal T10. The Roborock has a much larger internal dustbin, can automatically adjust its brushroll speed depending on the surface type that it's on, and delivers superior performance on all surface types. Meanwhile, instead of the Roborock's static cloth pads for mopping, the Narwal has a far more robust mopping system, with rotating cloth pads that should provide a more thorough clean. Its docking station has a built-in cleaning and drying system for its mopping pads that should significantly reduce the chances of it tracking dirty water around your home. In addition, the Narwal charges much faster and lasts roughly as long as the Roborock on a single charge.

The iRobot Roomba S9 is a better robot vacuum than the Narwal T10. The iRobot is easier to store due to the absence of a docking station, has a much larger internal dustbin, can maneuver around or over obstacles like rugs more effectively, and clears more debris on almost all surface types. However, the Narwal does have a mopping system for dealing with messes on bare floors.