The 5 Best Sony Soundbars of 2023 Reviews 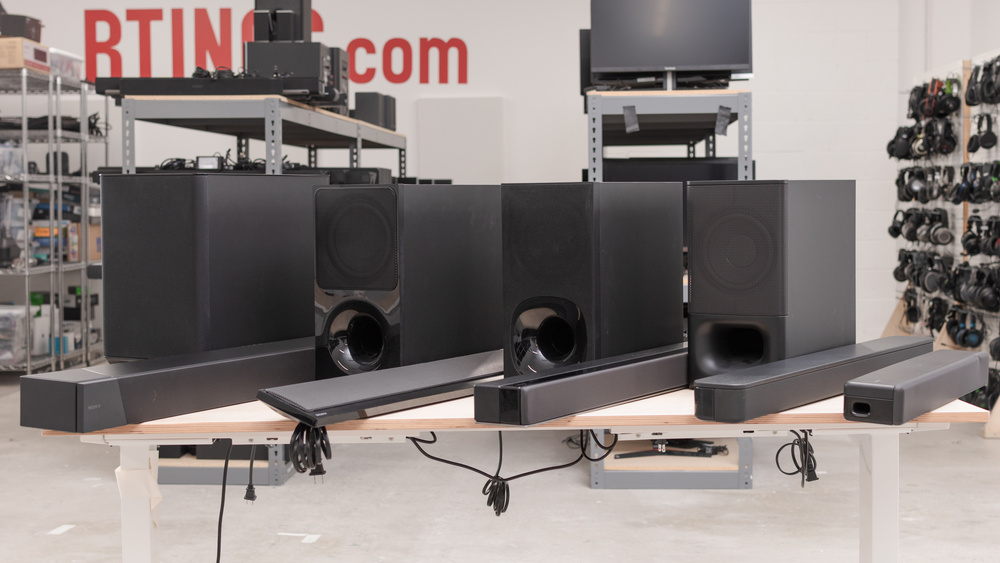 We've currently tested sixteen Sony soundbars. Sony produces sturdy, well-built soundbars. They tend to excel in dialogue reproduction, but their lack of sound enhancement features can be a drawback if you want a touch more bass or treble in your mix. As Sony produces soundbars at several price points, they can range in features.

Samsung and Sony both create soundbars that are available at a wide array of price points to address different segments of the market. Their top-of-the-line models include Dolby Atmos and DTS:X support, as well as tools like room correction to optimize their sound. More budget-friendly options are available from both to address stereo listeners. However, Samsung soundbars tend to come with far more sound customization tools, including graphic EQs.

While Sony's products are available at many different price points to address a more broad range of users, Sonos is a more premium soundbar manufacturer that generally produces more premium setups. Sonos bars come with built-in smart features like voice assistants, and they use psychoacoustic principles to create wider and more immersive soundstages than other setups. However, Sonos offers fewer options at budget-friendly price points, and they might not be worth the value for those who want a simple upgrade over their TV speakers.

Bose is a premium soundbar manufacturer that focuses on creating premium, top-of-the-line offerings with built-in smart features like voice assistant control. Sony offers similar devices with Dolby Atmos and DTS:X support, as well as voice assistant capabilities. However, Sony has more options available at budget-friendly price points, and they may be a better value for users who mostly listen to stereo content.

Sony makes a wide range of soundbars at several price ranges, so it's easy to find one that works for your budget. Although this range is large and available features vary, Sony soundbars are generally well-built but ordinary in overall sound performance. When compared to Samsung soundbars, Sony isn't as well-rounded in performance. Some models can also struggle to produce a deep, rumbling bass suitable for movies or music. Since most Sony soundbars lack bass and treble adjustments, the basic preset EQ offered in their place may not be enough customization for some users. These soundbars are well-suited for dialogue-centric content and will be more than adequate for everyday use.

Sony has a couple of different soundbar lineups on the market, but their naming strategy isn't very clear. Soundbars in a particular lineup generally address a certain segment of the market based on price, but you may find a model with similar features under a different lineup on the market at the same time. Here are a few of their common naming conventions:

Others, like the Sony HT-G700 and the Sony HT-Z9F, seem to be standalone models that don't come as part of a broader lineup.

Sony is a well-known brand offering a variety of soundbars across several price points. Overall, they're sturdy and well-built. They're also well-suited for reproducing dialogue, which is great for your favorite TV shows and audiobooks. Unfortunately, if you don't like their default sound profile, Sony only provides EQ presets, making it challenging to fine-tune your audio experience.