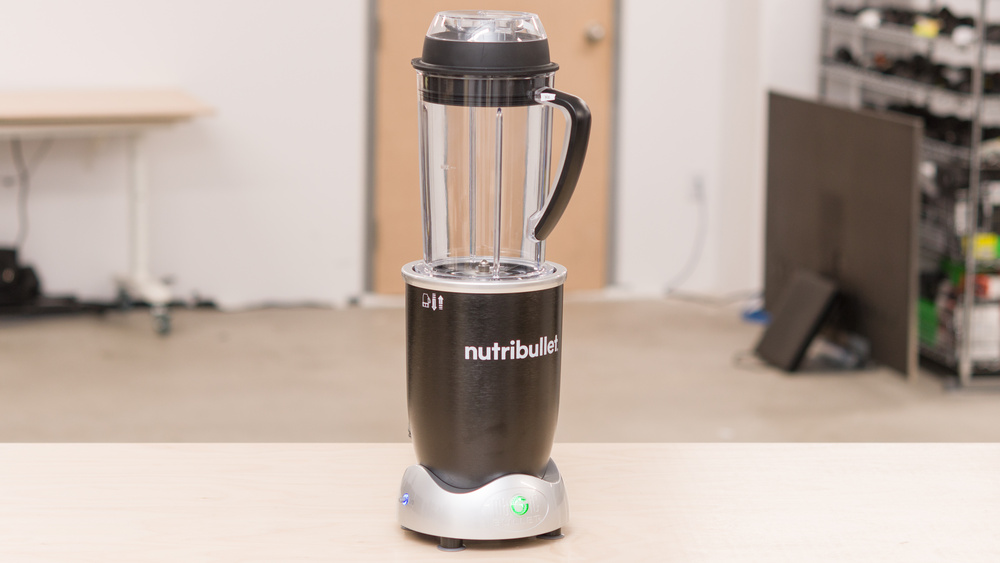 The NutriBullet Rx is a full-size blender and looks like a bigger version of personal blenders from NutrBullet like the NutriBullet Pro+. It comes with a 32-ounce jar that can be used to heat up room temperature ingredients with a seven-minute blending program. It also comes with 40-ounce and 24-ounce blending jars. The jars and lids are dishwasher-safe, but the blade assembly needs to be cleaned by hand.

The NutriBullet Rx is decent for multi-purpose use. It's well-suited for blending smoothies and soups since it easily purees fibrous ingredients like kale. It's not meant for blending hot ingredients, like roasted vegetables straight from the oven, but it can heat room temperature ingredients as they blend. It's also fantastic for thick mixtures like nut butter and hummus, and does a good job of crushing ice. However, the blades need to be cleaned by hand, which can be a bit time-consuming. It has a smaller capacity than most full-size blenders.

The NutriBullet Rx blender is excellent for making single-serve smoothies. Using the 24-ounce 'Short cup', it only takes about a minute to make a very smooth blend with ingredients like kale and blueberries. It's good for ice crushing, which is nice if your smoothie recipe includes ice cubes. There's a cup ring included for the 24-ounce jar so you can drink from it. However, it doesn't come with a to-go lid.

The NutriBullet Rx is great for multiple servings of smoothies. The biggest jar has a 40-ounce capacity, which is small for a full-size blender. While you can't make a huge batch, it doesn't take long to blend a fantastic smoothie, even if your recipe includes tough ingredients like leafy greens. The 40-ounce jar comes with a pitcher lid to make it easier to serve drinks. The jars and lids are dishwasher-safe, but unfortunately, the blades have to be cleaned by hand.

The NutriBullet Rx blender is okay for ice crushing. The manufacturer says the amount of ice in each batch shouldn't exceed 25% of the jar's capacity, so it's not ideal for making big batches of ice or frozen drinks. That said, if you need ice for a few cocktails, it's easy to use to make bar-quality crushed ice.

The NutriBullet Rx isn't intended for blending already-hot ingredients, which is a major downside for making soups since you can't use it to blend hot ingredients straight from the pan or oven. However, it has a mode advertised to heat cool ingredients to 70 degrees Celsius in seven minutes, so you can use it to make soup out of raw ingredients or cooked ones that have cooled. The blender can incorporate fibrous greens like kale into an extremely smooth blend.

The NutriBullet Rx is alright for professional use. Although it has a smaller capacity than most full-size blenders, it's very well-suited for making silky-smooth smoothies, soups, and purees, since it doesn't struggle at all with fibrous ingredients like kale. It can heat up room temperature ingredients. However, it's not meant for processing already-hot food, which is a big limitation if you want to use it for soup. That said, it's good for crushing small batches of ice and fantastic for making thick mixtures like nut butter.

The NutriBullet Rx comes in one color: Black. You can see the label for the unit we tested here. If you come across another variant or your NutriBullet Rx is different, please let us know, and we'll update our review.

The NutriBullet Rx is a full-size, bullet-style blender with a similar appearance to personal blenders from NutriBullet, like the NutriBullet PRO 1000 and NutriBullet Pro+. However, it's bigger and has a better build quality. It has a blending program for heating up room temperature ingredients as they blend but isn't intended for processing already-hot ingredients, unlike other blenders like the Oster Pro 1200 or KitchenAid K150.

If you want to see other options, look at our picks for the best bullet blenders, the best personal blenders, and the best blenders for smoothies.

The NutriBullet Smart Touch Blender Combo and the NutriBullet Rx have different strengths. The Smart Touch is a better choice if you want a large-capacity main jar. It's also sturdiest. The Rx's biggest jar only has a 34-ounce capacity, but it offers a more versatile performance since it can heat up room-temperature ingredients and crush ice. It's also much more suitable for making nut butter.

The NutriBullet Rx and the NutriBullet Pro+ have different strengths, and you may prefer either, depending on your preferences. The Rx is more versatile since it can make crushed ice and heat room-temperature ingredients. The Pro+ makes a somewhat less smooth blend with fibrous ingredients like kale but comes with to-go lids for its personal jars, which you might prefer if you're looking for a blender for smoothies.

The NutriBullet Rx is better for most purposes than the Ninja Nutri Ninja Pro. The Rx is a full-size blender that makes a smoother blend with fibrous ingredients like kale. It's much easier to use for thick mixtures like nut butter, and you can use it to heat up room-temperature ingredients. However, the Ninja is a smaller personal blender. It's easier to clean by hand and comes with to-go lids for its jars.

The Ninja Foodi Power Nutri DUO is better than the NutriBullet Rx for most purposes. The DUO does a much better job of making nut butter and processing fibrous ingredients. It's also much easier to clean by hand, and its blades are dishwasher-safe, unlike the Rx's. On the other hand, the Rx has a preset for heating ingredients.

The Breville the Fresh & Furious is better than the NutriBullet Rx for most purposes. The two blenders perform pretty similarly, but the Breville is easier to clean by hand, quieter, and better for crushing ice. On the other hand, neither model can hot blend, but the Rx can heat up room-temperature ingredients as they blend.

The Ninja TWISTi is better than the NutriBullet Rx for most purposes. The TWISTi does a better job of processing fibrous ingredients for recipes like green smoothies and comes with a resealable to-go lid for its personal jar. It's also better for tough tasks like making nut butter. However, you can use the Rx to heat ingredients as they blend, so you may prefer it if you want to use your blender to make a quick batch of hot soup. The Rx is also easier to clean by hand.

The NutriBullet Rx looks like a bigger version of the brand's bullet-style blenders like the NutriBullet Pro+. It's quite tall with the jar docked on the motor base, so you probably need to store it on your counter, unless you have a spacious cupboard.

It has a good build quality. Unlike other NutriBullet models that we've tested, the transmission is a mix of metal and plastic, and the gear that turns the blade assembly is solid metal.

The rest of the motor body is mostly made of decently solid plastic, though it wobbles a bit when set on a counter and the power button on the side feels cheap. It's also a bit bigger than other NutriBullet models that we've tested, and the larger blade assembly can be difficult to unscrew from the jars, especially for people with smaller hands. However, it comes with a 'Blade Remover' tool that fits onto the blade assembly and makes it easier to remove. Still, it can be hard to keep a good grip on the jar at the same time, and you may need to put the jar under your arm while you use the tool.

The jars are made of plastic and can go on the top rack of your dishwasher, along with the lids.

There are two lids for the main jar: a two-part lid whose removable centerpiece doubles as a two-ounce measuring cup, and a pitcher lid that opens and closes with a knob on top.

There's also a lip ring that makes it more comfortable to drink from the jars, and a resealable lid so you can easily store what you make. These and the pitcher lid fit on any jar. The jars and lids are also top-rack dishwasher-safe.

The power cord is long enough to reach an outlet near your counter. Unfortunately, there's no compartment to stow the cord when it's not in use.

It's fantastic for processing small batches of fibrous ingredients. Using the 24-ounce 'Short cup' and the 'Smoothie' program, it quickly purees ingredients like kale, with no grains or unprocessed specks leftover.

It's also superb for processing fibrous ingredients at full capacity. You have to run the 'Smoothie' program twice for the best results, so it's a longer process than with a smaller batch. Still, it's very easy and produces a nearly perfectly smooth puree with fibrous ingredients like kale or broccoli.

It's good for ice crushing. The manufacturer says you should only fill the jar 25% with ice, so if you want to make a lot of ice for a party, it's not the best choice, since you'll need to work in batches. Still, it's not that difficult of a process and it makes great bar-quality crushed ice.

It's fantastic for nut butter. You need to undock and shake the jar a few times at the beginning of the process to keep the mixture moving, but after one 'Smoothie' cycle, you don't need to intervene anymore. After three cycles in total, you have very smooth, almost liquified nut butter. There can be some unprocessed pieces and dust left over because some ingredients get stuck under the blades. To avoid that, you can scrape the blades and run another blending cycle.

There's no way to control the speed of NutriBullet Rx, and it's advertised to have a single blending speed. However, when you first turn it on, it blends at 25800 RPM for about 30 seconds before decreasing to 2500 RPM for the rest of the blending cycle.

The other program, 'Souperblast', is advertised to heat ingredients to 70 degrees Celsius over seven minutes. You can activate it by holding down the 'G Button' on the front of the motor base for two seconds with the blender powered on. The G button's light is blue when the blender is on but not running, green during a 'Smoothie' cycle, and orange during a 'Souperblast' cycle.

Since the blender doesn't have a manual blending mode, you need to use the 'Smoothie' mode to blend anything you don't want to heat up. You can run consecutive 'Smoothie' cycles when your recipe needs more processing time, but the manual warns not to run more than three cycles in a row without letting the blender rest for two to three minutes.

It's decently easy to clean by hand. You can run the blender with soap and water in the jar to take care of some food residue, especially on the walls of the jar. However, you need to spend some time scrubbing the rim of the jar and the blade assembly. The blade assembly has some narrow, tough-to-reach spots that are hard to reach, which adds to the time it takes to clean. Fortunately, the blender comes with a thin cleaning brush that's helpful for getting tight spots.