Your browser is not supported or outdated so some features of the site might not be available.
Best
Smoothies Blenders Personal Immersion Ninja Cheap Vitamix Protein Shake Crushing Ice Frozen Drinks Bullet Under $100
73
Blenders store-bought and tested, supported by you via insider access, and when you purchase through links on our site, we may earn an affiliate commission. 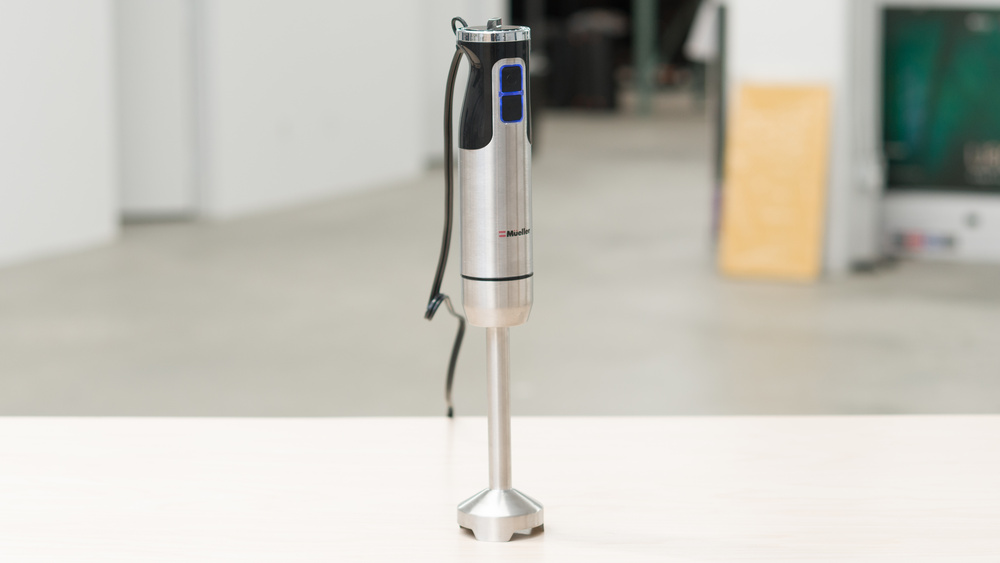 The Mueller Ultra-Stick Ηand Βlender (also called the Mueller Austria Ultra-Stick Ηand Βlender) is a budget-friendly immersion blender that you can use to blend hot ingredients directly in a pot or pan. It can make decent smoothies, but it's poorly made and prone to breaking. The body and blending arm are metal, but the gear that connects them is plastic that can shatter, especially if you use it to process tough ingredients like almonds or ice cubes. It doesn't come with a jar but does include whisk and milk frother attachments to help make things like salad dressing and lattes, which helps make it a bit more versatile. Unfortunately, this blender isn't recommended because it's likely to break with repeated use.

Note: We purchased two of these blenders, and both units broke during testing. The first unit's blades broke off during the ice crushing test, and the second broke during the almond butter test when the plastic connection between the motor body and blades came apart. This poses a safety issue, especially since the first blender's blades came off. Several users on the manufacturer's website and other sites report that their blender broke similarly.

The Mueller Ultra-Stick Hand Blender is poor for multi-purpose use. It can hot blend and makes decent smoothies, but it's still not ideal for that purpose since it's poorly made and prone to breaking. Our unit broke when we used it to make crushed ice, and the replacement unit broke during the almond butter test. There are whisk and milk frother accessories included, which help make it a bit more versatile.

The Mueller Ultra-Stick Hand Blender is disappointing for smoothies. It's not well-built, and the plastic gears that connect the motor body to the blending arm are prone to breaking after just a few uses. It also doesn't come with a jar you can use for blending, so you need to use your own container to make a smoothie. It doesn't have much of an issue processing frozen banana chunks and makes decent smoothies, although if you add ingredients like kale, your drink can have a very grainy texture.

The Mueller Ultra-Stick Hand Blender can't crush ice. The ice builds up under the blender and jams the blades, and our unit's blades broke off during the ice crush test. Βecause of its poor build quality, it could be dangerous to try and use it to crush ice cubes.

The Mueller Ultra-Stick Hand Blender is good for soups. It can be used for hot blending and makes decent smoothies, so it should process soft cooked vegetables. However, the blender has a bad build quality and can break during use, which is a serious safety issue.

The Mueller Ultra-Stick Hand Blender is bad for professional use. It has a bad build quality and is likely to break if you use it to process tougher ingredients like almond and ice. There's also no included beaker that you can use for blending, and you should only run it for up to 50 seconds continuously. You can use it for hot blending, and it comes with whisk and milk frother attachments that help make it more versatile, but it feels too fragile for heavy use.

The Mueller Austria Ultra-Stick Ηand Βlender is a compact immersion blender with a blending shaft that's long enough to reach the bottom of most pots and pans. The blending shaft is also detachable for easier storage in a kitchen drawer.

The Mueller Austria Ultra-Stick has a bad build quality. While the body and blending arm are stainless steel, the mechanism that connects them is plastic. During testing, our unit's blades broke off during the ice crush test. The replacement unit broke during the almond butter test when the plastic connection point between the motor body and blending arm shattered. The blender's fragile build can be a safety issue, especially if the blades come loose. If you have this blender, it's recommended not to run it without the blending arm completely submerged in the recipe.

Note: Some users report having the same issue with the plastic component in the motor base shattering after just a few uses, or with the blades becoming detached.

This blender doesn't come with a jar.

The power cord is long and can reach an outlet near your counter.

The Mueller Austria Ultra-Stick has a speed dial with eight different settings. It's possible to change the speed setting while blending, but you need to keep holding down the power button to run the blender, so you need two hands. There's a button for turbo mode, which runs the blender at its highest speed, regardless of the speed chosen on the dial.

This blender can't make almond butter. Trying to process tough ingredients can cause the blades to stop rotating after only about 20 seconds of blending. The plastic gears that connect the blades to the motor body can break and fall out of the blender when the two parts are disconnected.

The Mueller Austria Ultra-Stick makes decent smoothies. If you blend for about two minutes in total, it can incorporate frozen banana chunks and raw kale into a cold, pleasant smoothie. Ηowever, it doesn't fully process the kale, and there are noticeable bits leftover that feel big enough to get caught in your teeth. The manufacturer also says the blender shouldn't run for more than 50 seconds continuously, so you need to pause in the middle of the process.

The Mueller Austria Ultra-Stick can't crush ice. While the manual recommends using crushed ice instead of ice cubes in recipes "for best results," it doesn't specify that you shouldn't use the blender for ice crushing at all. Ηowever, if you try to use it to crush three ice cubes, the blades can break off. It's a safety issue using the blender for this purpose isn't recommended. Even if they don't break, the blades quickly get jammed with ice, and you need to use warm water to clear them, so it's not suitable for making crushed ice.

The Mueller Austria Ultra-Stick is very easy to clean by hand. After making a smoothie, you can rinse the blending arm with water and then run the blender in a beaker with soap and warm water for a few seconds to get it completely clean. While it can't make almond butter, it should be similarly easy to clean when you're working with sticky ingredients, although you may need to wipe it quickly with a sponge or run it for a little longer with soap and water.

You can use it to blend hot ingredients for recipes like soups, sauces, and purees. There's also a milk frother attachment included and a whisk that you can use for tasks like making whipped cream or stirring salad dressing.

The Mueller Austria Ultra-Stick is a compact immersion blender, like the KitchenAid 5-Speed Hand Blender and the Braun MultiQuick 5. It comes with whisk and milk frother attachments but doesn't include a jar you can use for blending, unlike some other budget-friendly options like the KitchenAid Variable Speed Corded Hand Blender or the Cuisinart Smart Stick Two-Speed Hand Blender. It's also very flimsy and prone to breaking, especially if you use it to process harder ingredients like almonds or ice cubes.

The NutriBullet Immersion Blender is better than the Mueller Ultra-Stick Hand Blender. It has a much better build quality and makes better-blended smoothies. It can also handle tough ingredients like ice and almonds. The Mueller comes with a whisk and a milk frother, while the NutriBullet only comes with a whisk. Unfortunately, it's badly built and prone to breaking.

The Bamix Mono M133 is better than the Mueller Ultra-Stick Hand Blender. The Βamix comes with a jar you can use for blending and performs better for purposes like crushing ice and making almond butter. The Mueller makes better-blended smoothies, but it's badly built and prone to breaking.

The Cuisinart Smart Stick Two-Speed Hand Blender is better than the Mueller Ultra-Stick Hand Blender. Neither model is well-built, but the Cuisinart is more sturdy and can crush ice and make almond butter. On the other hand, the Mueller makes better-blended smoothies, but its fragile build quality can be a safety issue.

The KitchenAid Variable Speed Corded Hand Blender is better than the Mueller Ultra-Stick Hand Blender for most purposes. The KitchenAid has a significantly better build quality, makes better-blended smoothies, and comes with a jar you can use for blending. It's also better for making almond butter and crushed ice, although it's not ideal for that purpose.

The Braun MultiQuick 5 is better than the Mueller Ultra-Stick Hand Blender. Neither model can crush ice or make spreadable almond butter, but the Βraun is for most purposes because it has a much better build quality. It also comes with a beaker you can use for blending.