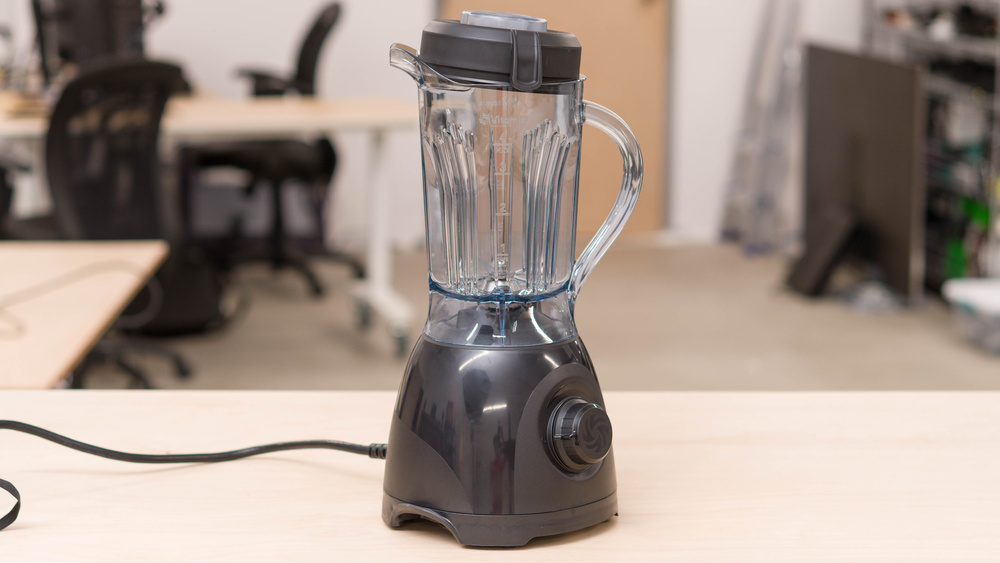 The Vitamix ONE is a small full-size blender advertised for making liquidy foods like smoothies, dips, and dressings. You can use its 32-ounce main jar to make a fantastic smoothie in under a minute. Unfortunately, it doesn't feel as premium as other Vitamix models, and you can't use it for hot blending or processing nuts and grains. It also fails to crush ice. However, it conveniently comes with a tamper as well as a two-part lid, and it's very easy to clean, although none of its parts are dishwasher-safe.

The Vitamix ONE is poor for multi-purpose use. It's not intended to blend hot ingredients or make almond butter, and it fails to crush ice. However, it takes under a minute to make an outstanding smoothie in its 32-ounce jar. While none of its parts are dishwasher-safe, it's very easy to clean by hand. It feels reasonably well-built as well, but not particularly premium.

The Vitamix ONE is decent for making smoothies and protein shakes. It can make an incredible, silky smoothie in less than a minute. It's also easy to rinse clean after making something liquidy like a smoothie. However, it's not able to crush ice on its own, which may be disappointing if you like to add it to your smoothies. Also, its main jar has a 32-ounce capacity, which is small for a full-size blender.

The Vitamix ONE isn't able to crush ice cubes.

The Vitamix ONE can't be used to blend hot ingredients and isn't suitable for making soups.

The Vitamix ONE is poor for professional use. It doesn't feel extremely sturdy and has a relatively small 32-ounce capacity. It's also not very versatile since the manufacturer says you shouldn't use it to blend hot ingredients or certain harder ingredients, including almonds and grains. It also fails to crush ice cubes. It makes fantastic smoothies, and it's very easy to clean even if you're working with sticky ingredients.

The Vitamix ONE blender is a tall blender with a smaller footprint than other Vitamix models like the Vitamix Explorian E310. It doesn't weigh very much for a full-size blender. However, while the base is advertised to be seven inches deep, measured from the back of the blender to the front speed dial, it's a few inches bigger than that, including room for the power cord at the back.

This blender has an okay build quality, but it doesn't feel nearly as well-built as other Vitamix models, like the Vitamix A2500. The motor base is sturdy, but the rubber material doesn't feel as premium. The gears are metal, but the rubber gasket that sits on top of the motor body moves around easily. You can also remove it if you want to clean beneath it. The speed dial is also a little flimsy, and you can easily pull it off the motor base. On the plus side, the underside of the base has vents and two handle-like grooves to help make the blender easier to pick up.

The Vitamix ONE's main jar has a small capacity for a full-size blender. The maximum fill line is 32 ounces. Unfortunately, the manual doesn't indicate that it's dishwasher-safe.

This blender has four sharp blades that can't be removed from the jar. Similar to the jar, the manual doesn't indicate that the blades are dishwasher-safe.

The lid has a similar design to the one that comes with the Vitamix Explorian E310. The circular middle part is removable, so you can use the tamper or add ingredients without stopping the blender. There are clips on either side that hook onto the lip of the jar to hold it in place.

The power cord should be long enough to reach most outlets near your counter, although it's much shorter compared to other Vitamix models' cords, like the Vitamix 5200. There's also no way to stow the cable when it's not in use.

The Vitamix ONE blender has a dial that increases the speed as you turn it clockwise. Unlike some other models with speed dials, like the Vitamix Explorian E310, there aren't any fixed increments for specific speeds. The dial doesn't offer much feedback either, except for a soft click when you turn it on and at the maximum speed setting. There's no on/off toggle, and if the blender is unplugged when it's running, it comes on at the same speed setting when you plug it back in.

While it doesn't have any preset modes, you can simulate a pulse mode by turning it on and off repeatedly. This blender's max speed is very fast, but its lowest setting is quite quick as well, so it doesn't offer a very wide range of speeds like most Vitamix models that we've tested. Also, at top speed, it's one of the loudest blenders we've tested.

According to the manufacturer, the Vitamix ONE blender isn't intended for blending almonds, other nuts, or grains, and using it for that purpose voids the warranty.

This blender makes a fantastic smoothie in its main jar. It takes roughly 30 seconds to process the ingredients using a medium-low speed setting and the tamper to push the mixture towards the blades a few times. The result is a very well-blended, great-tasting smoothie.

Similar to the Vitamix Explorian E310, this blender doesn't have any programs or modes.

The Vitamix ONE is very easy to clean. Blending some warm water and soap in the jar cleans away liquid foods like smoothies. Although it's not intended for making almond butter, we added some that were processed by another blender to the ONE's jar. We then ran the blender for a few seconds to get an idea of how easy it is to clean sticky ingredients from the jar and blades. A rinse takes care of most of the almond butter. You may need to use a brush to completely clean the blade assembly, but overall it's a simple process.

The Vitamix ONE is a straightforward blender. It comes with a tamper that you can use to push food towards the blades but otherwise doesn't have any extra features. Unfortunately, you can't use it to blend hot ingredients, make nut butters, or process dry grains. Using it for those purposes voids the warranty, according to the manufacturer.

The Vitamix ONE comes in one color, 'Black', and you can see the label for the unit we tested here.

If you come across another variant or your blender is different, please let us know in the discussions, and we'll update our review.

The Vitamix ONE is a compact full-size blender with a relatively small 32-ounce capacity. It's not as well-built as other models from this manufacturer, like the Vitamix Explorian E310 or the Vitamix 5300, and it's less versatile since it's not intended for blending hot food or tougher ingredients like almonds or grains. It's marketed for making softer blends like drinks, dips, and dressings, and it makes silky smoothies quickly.

The Vitamix Explorian E310 is better than the Vitamix ONE. Unlike the ONE, the Explorian can blend hot ingredients, make snow-like crushed ice, and produce smooth almond butter. It also has a bigger capacity and a significantly better build quality. However, the ONE is shorter and lighter. It's also easier to clean if you're working with sticky ingredients.

The Vitamix 5300 is better for most purposes than the Vitamix ONE. The 5300 has a significantly better build quality and makes smooth almond butter and snow-like crushed ice. It has a much bigger, 62-ounce capacity, and you can use it to blend hot ingredients. On the other hand, the ONE makes a much better-textured smoothie.

The KitchenAid K400 is a better multi-purpose blender than the Vitamix ONE. The KitchenAid can hot blend, crush ice, and make smooth almond butter. It has a much better build quality and a bigger capacity. On the other hand, the Vitamix makes a significantly better smoothie in its 32-ounce jar. The Vitamix is also much easier to clean by hand when you're working with sticky ingredients, although it's not dishwasher-safe like the KitchenAid.

The Vitamix A3500 is better than the Vitamix ONE. The A3500 has a much better build quality and a larger capacity. It can make almond butter, crush ice, and hot blend, unlike the ONE. However, the ONE makes much better smoothies in less time.

The Vitamix 5200 is better than the Vitamix ONE. The 5200 has a much better build quality and a greater range of speed settings. It can blend hot ingredients, make smooth almond butter, and crush ice. On the other hand, the ONE is a much smaller blender that takes up less space.

The Vitamix ONE is a better blender for smoothies than the NutriBullet Blender Combo. The Vitamix makes much better smoothies in its 32-ounce jar, and it's significantly easier to clean. On the other hand, the NutriBullet can blend hot ingredients. Its main jar has a bigger capacity, and it also comes with two personal jars and matching to-go lids.

The Vitamix A3300 is better than the Vitamix ONE. The A3300 is much better-built, offers a greater number of speed settings, and works with a companion app that gives you access to preset modes. It can blend hot ingredients, make smooth almond butter, and crush ice. It's also much easier to clean. On the other hand, the ONE is a much more compact blender.