By Jackson Smylie
What it is: Whether the speaker supports Wi-Fi.
When it matters: When you want to connect to your speaker via Wi-Fi, instead of using wired or Bluetooth connections. Certain speakers only support Wi-Fi connections. These are mostly speakers that support multi-room setups.
Score components:
Score distribution

Wi-Fi is a common connection method for a variety of smart devices. However, not all speakers are Wi-Fi compatible since many only offer Bluetooth for streaming audio content wirelessly. Wi-Fi is a useful addition for a speaker, especially if you like using it at home, where you can link it with other smart devices. Also, Wi-Fi is generally required to use Google Chromecast and Apple AirPlay, two common connection methods for streaming audio content. Compared to Bluetooth, Wi-Fi is a less portable connection since you need a wired router nearby to connect to the Internet.

We break down a speaker's Wi-Fi performance into many different factors to give you a better understanding of which speaker best suits your needs. If a speaker is Wi-Fi compatible, we check its Wi-Fi version and which frequency band it uses. We also check whether a speaker has Apple AirPlay and Google Chromecast built-in. If it does, we test its latency over each connection, which indicates how suitable it is for watching videos. Below, we delve into these tests in more detail and explain why these factors matter when finding a speaker that's right for you.

A speaker's Wi-Fi performance matters if you like streaming music over a Wi-Fi connection. Also, if you like using Apple AirPlay and Google Chromecast, your speaker must be Wi-Fi compatible since they both operate over Wi-Fi. That said, AirPlay and Chromecast built-in are typically only found on Apple and Google devices, respectively. If you like using your speaker at home, you may want it to be Wi-Fi compatible to connect to other smart home devices. If you watch videos via AirPlay or Chromecast, it's also important that your speaker has low latency over these connections. Low latency ensures that the audio and video are in sync, which feels more real and natural. Also, you may want a speaker that comes with the newest version of Wi-Fi, which is generally faster and has a longer range than previous versions.

We test many aspects of a speaker's Wi-Fi performance to give you a better understanding of what to expect. We check which version and frequency band of Wi-Fi it uses, which gives you some general information about its speed and range when connected over Wi-Fi. We also determine whether a speaker has support for Apple AirPlay and Google Chromecast, which are two common methods of streaming audio content through your speaker. If a speaker has either of these built-in, we test its latency over these connections. This tells you whether your speaker is suitable for watching videos and playing video games since low latency means the audio and video will be in sync.

What it is: The version of the Wi-Fi supported by the speaker.
When it matters: When you want to make sure the speaker is compatible with your network and supports the features and speed that you need.

Wi-Fi technology gets updated periodically, which improves the speed and range of a device's Wi-Fi connection. There are six versions of Wi-Fi in total, though currently only Wi-Fi 4, Wi-Fi 5, and Wi-Fi 6 are commonly used. A speaker's Wi-Fi version may affect its range and speed of data transfer, which is helpful if you like using your speaker at home and streaming music over a Wi-Fi connection. The newest version, Wi-Fi 6, offers the fastest speed and largest range, followed by Wi-Fi 5, then Wi-Fi 4. Note that a Wi-Fi-compatible speaker can still connect to Wi-Fi regardless of its Wi-Fi version. To test a speaker's Wi-Fi version, we check its manual and the manufacturer's website. If we can't find it on either of these sources, but the speaker is Wi-Fi compatible, we set its version as 'Unlisted'. Since Wi-Fi 6 released in 2019, many speakers come with Wi-Fi 4 and Wi-Fi 5. For example, the Denon Home 350 has Wi-Fi 5, while the Apple HomePod mini comes with Wi-Fi 4.

What it is: Whether the speaker supports 2.4GHz Wi-Fi frequency band, 5GHz, or both.
When it matters: Depending on your needs and setup you may find one a better fit than the other. The 2.4GHz band is a bit slower but works over a longer range and thicker walls. The 5GHz is faster, but may not be as robust over longer distances and thicker walls.

What it is: Whether the speaker supports Apple casting protocol AirPlay.
When it matters: When you want to be able to send audio content to your speaker via Apple AirPlay-enabled devices.

Apple AirPlay is software that allows you to stream content wirelessly. If a speaker has Apple AirPlay built-in, you can pair a smart device to play music or podcasts through the speaker. Typically, only Apple devices like iPhones and iPads support Apple AirPlay. It usually uses a Wi-Fi connection to send content between devices, though some devices support peer-to-peer AirPlay, which operates over Bluetooth. AirPlay is also designed with home use in mind, letting you stream content to multiple devices in your home at once. To test whether a speaker has Apple AirPlay built-in, we check its manual and the manufacturer's website. Apple speakers, like the Apple HomePod and the Apple HomePod mini, typically have Apple AirPlay built-in, though some from other brands, like the Sonos One Gen 2, have it built-in as well.

What it is: Latency measured with an Apple iPhone 11 using the YouTube app over Wi-Fi. Note that other apps may have a different latency than the YouTube app.
When it matters: If you want to watch video content with your speaker over Wi-Fi, this value would be important, since too much latency will cause sync issues between audio and video.
Good value: <150ms
Noticeable difference: 30ms
Score distribution

Latency measures the time it takes for an audio signal to reach your ears after being sent from its source. When using Apple AirPlay to stream audio through your speaker, this represents the delay between your paired device playing the audio and you hearing it. This is important when watching videos or playing video games since too much delay between the audio and video can make dialogue feel out of sync. If a speaker has low latency over Apple AirPlay, dialogue feels natural and real. Latency isn't very important when listening to music or podcasts since there's no video that the audio has to align to. 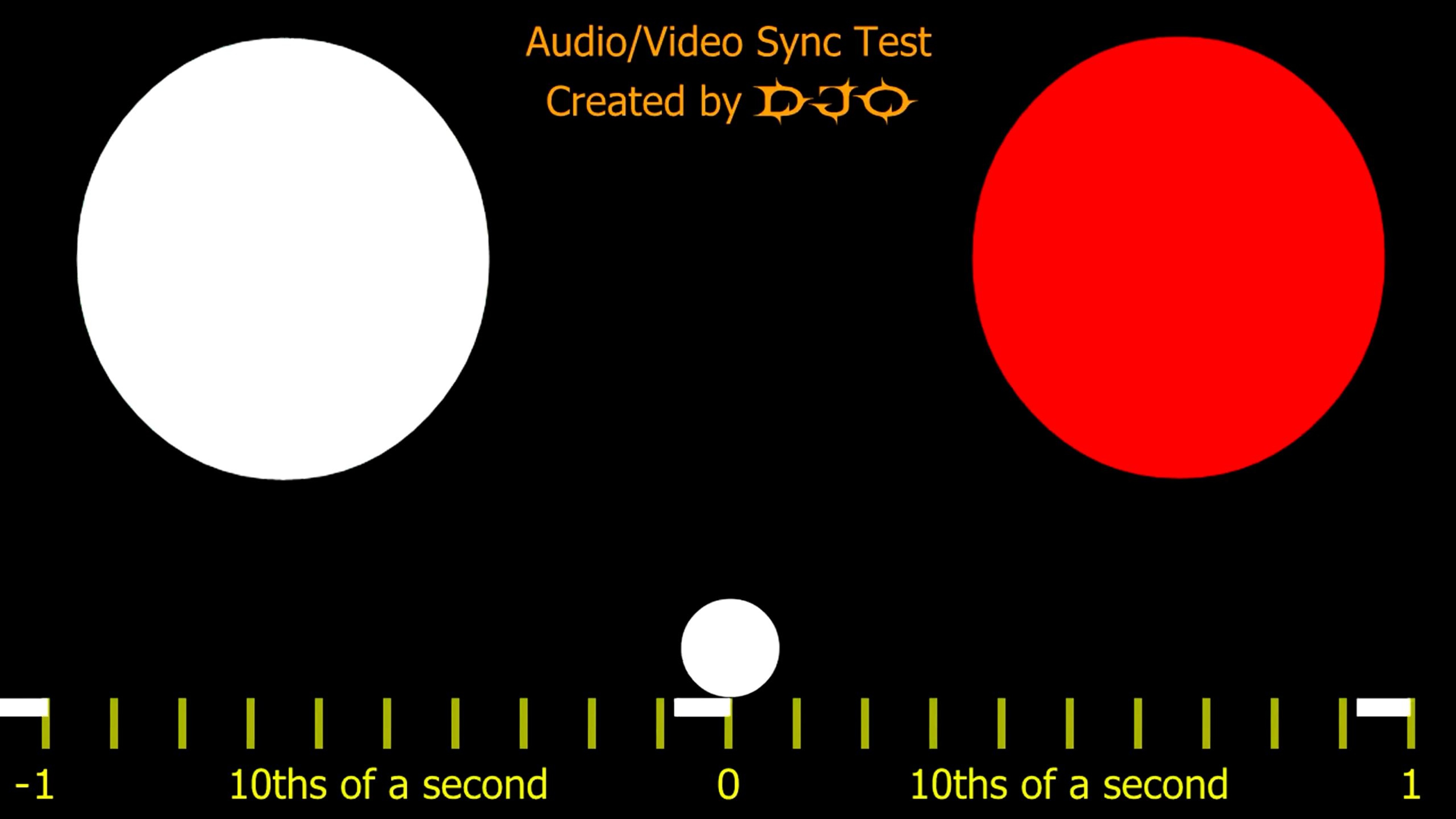 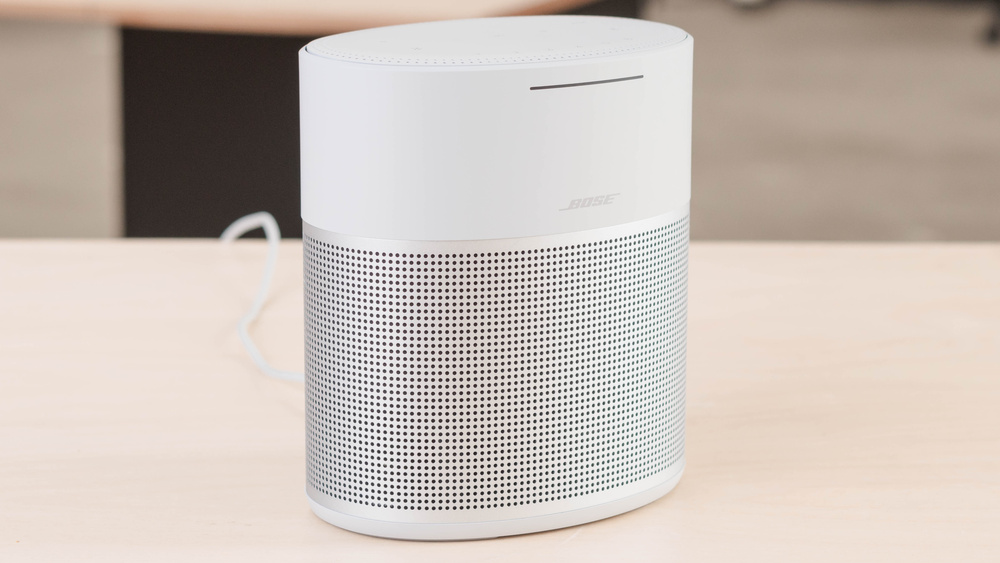 Screenshot from the latency test video, at the moment the 'tick' is played
Bose Home Speaker 300 - Apple AirPlay latency: 6ms

We consider a value of <150ms to be good for a speaker's Apple AirPlay latency. This is the same as our good value for Bluetooth latency and Google Chromecast latency. However, you may still notice a slight delay between audio and video if a speaker has close to 150ms of latency since this varies from listener to listener. Thankfully, most speakers with Apple AirPlay we've tested have low latency over that connection, so videos feel natural and aligned with the audio. Some apps and some devices compensate for latency differently, so you may notice some variation in your speaker's latency performance.

What it is: Whether the speaker supports Google casting protocol Chromecast.
When it matters: When you want to be able to send audio content to your speaker via Google Chromecast-enabled devices.

What it is: Latency measured with a Samsung Galaxy S10e using the YouTube app over Wi-Fi. Note that other apps may have a different latency than the YouTube app.
When it matters: If you want to watch video content with your speaker over Wi-Fi, this value would be important, since too much latency will cause sync issues between audio and video.
Good value: <150ms
Noticeable difference: 30ms
Score distribution

We test Chromecast latency the same way we test Apple AirPlay latency. However, instead of using an iPhone 11 to connect to the speaker, we use a Galaxy S10e. We still use the iPhone 7 as the phone for filming the slow-motion video, which ensures that it's recorded consistently between each test. Similar to Apple AirPlay latency, we consider <150ms to be a good value for Chromecast latency. The Google Home Max has a latency of 46ms over its Chromecast connection, making it suitable for watching videos. However, the Google Nest Mini has a latency of 862ms, which is extremely high, so it's not very suitable for watching videos or playing video games. However, some apps and some devices compensate for latency differently, so your real-world experience may vary.

Although Wi-Fi is a common connection method in general, not all speakers are Wi-Fi compatible since many offer just Bluetooth instead. However, Wi-Fi is useful if you like using your speaker at home, and especially if you want to stream audio content over Apple AirPlay or Google Chromecast. Depending on how you like using your speaker, you may want one with low latency over these connections, making it suitable for watching videos. Also, you may want a speaker with the newest version of Wi-Fi, which indicates it's faster and has a longer range than previous versions.