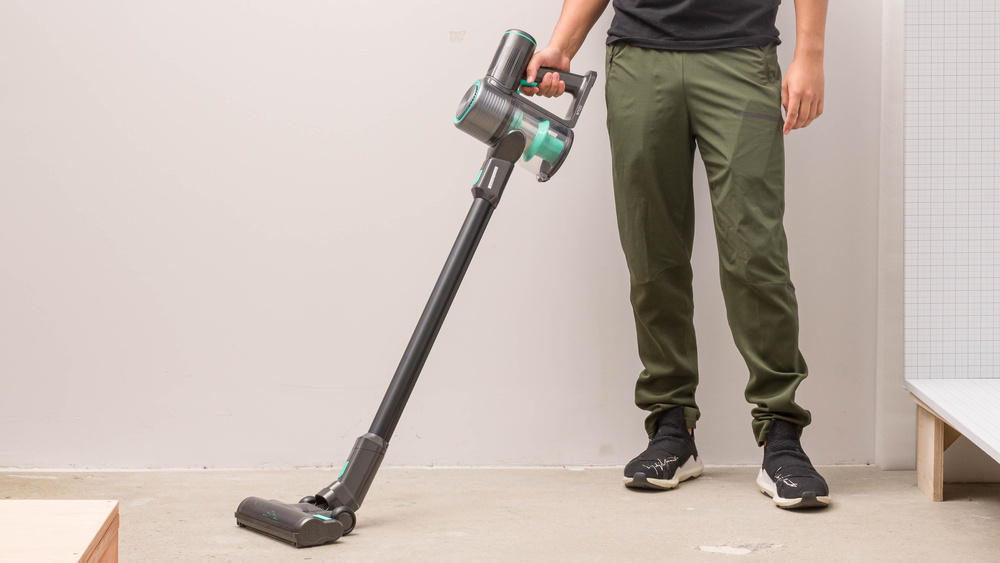 The Wyze Cordless Vacuum is a basic budget-friendly cordless stick vacuum. It's very lightweight, compact, and has an allergen-trapping HEPA filter. It also does a very good job clearing debris on bare floors and performs amazingly well on low and high-pile carpets overall. That said, bulky debris like cereal can occasionally get stuck at the entry to its dirt compartment. It also lacks a dedicated brushroll on/off switch and can consequently get caught on rug tassels.

The Wyze Cordless Vacuum is good for cleaning bare floors. It does a superb job of cleaning pet hair and small debris like rice. However, while it cleans the majority of bulky material like cereal, this type of debris can still get stuck at the entry of its dirt compartment or in its cyclone. There are also quite a few components that need regular cleaning. Still, it's easy to maneuver, incurs virtually no recurring costs, and offers decent overall battery performance.

The Wyze Cordless Vacuum is a very good option for low-pile carpet. It sucks up pet hair as well as fine material like baking soda with very little difficulty. It also does a decent job with larger material like sand. It's easy to maneuver too, and depending on your choice of settings and usage habits, its battery life should be long enough for most cleaning sessions. That said, it has many parts that need periodic cleaning and has some components that feel a little fragile.

The Wyze Cordless Vacuum is great for cleaning high-pile carpet. It's fantastically effective in sucking up pet hair, fine debris like baking soda, and larger material like sand. It also incurs virtually no recurring costs, though it does have a couple of parts that need regular cleaning. Its lightweight construction isn't the sturdiest, but it's very lightweight and consequently quite maneuverable. However, it lacks a brushroll on/off switch, so it can occasionally get stuck on high-pile carpets or rug tassels.

The Wyze Cordless Vacuum is an excellent option for dealing with pet hair. It sucks up pet hair without issue on most kinds of surfaces and has an allergen-trapping HEPA filter. You can remove its brushroll for easier clearing of hair wraps. Also, while it doesn't come with a motorized turbo brush in the box, one can be purchased separately. Unfortunately, some parts of its mainly plastic construction feel flimsy, and many components need regular cleaning.

The Wyze Cordless Vacuum is excellent for vacuuming staircases. Its lightweight cordless design makes it easy to carry up and down long flights of stairs, and you can quickly reconfigure it into a handheld vacuum to clean tight spots. It delivers great overall performance on a mix of surface types too. That said, some parts of its mainly plastic construction feel a little fragile.

The Wyze Cordless Vacuum is a great option for vacuuming the inside of your car. It can be reconfigured into a compact handheld vacuum and delivers impressive performance on low-pile carpet. Its cordless design allows you to clean all parts of your car, even if you're parked far from any electrical outlets, and its lightweight construction makes it easy to pick up and carry. It comes with a combination upholstery tool/soft bristle brush and a dedicated crevice tool for clearing debris in tight corners. While a motorized turbo brush isn't included in the box, one can be purchased separately.

The Wyze Cordless Vacuum has passable build quality. It's mainly made of plastic, though its detachable wand is aluminum and the floorhead wheels are rubber. It has an LED screen that displays the percentage of remaining battery charge and the current suction power mode. It feels fairly sturdy for the most part, especially for a cordless stick vacuum at this price point, but it does have a couple of weak points. The back of its floorhead scratches easily, which can be observed on our test unit. Also, while the clear plastic dirt compartment isn't too fragile, it could still break if you drop it.

Out-of-the-box assembly is simple, requiring only that you put together the few included parts and mount its docking station to a wall. Most of its parts attach to one another with easy-clip mechanisms. You can also remove its battery.

This vacuum has fairly demanding maintenance requirements. Thankfully, most parts are easy to access.

The Wyze Cordless Vacuum is okay to store. Its wand doesn't collapse, but it does have a rack station that holds the vacuum upright and has room for two attachments. Using its rack station changes its dimensions as follows.

The Wyze Cordless Vacuum has an adequate dirt compartment. It's similar in capacity to the LG CordZero A9 Ultimate's somewhat small dustbin, so it needs regular emptying. However, its clear plastic construction makes it easy to check its fill status at a glance.

The Wyze Cordless Vacuum's range is limited only by its remaining battery life and the room left in its dirt compartment.

The Wyze Cordless Vacuum is impressively portable. It weighs very little and has a built-in carrying handle to make it easier to lift and hold.

The Wyze Cordless Vacuum has decent battery performance. Using it in its most energy-efficient 'ECO' mode in conjunction with its 2-in-1 combination tool yields roughly an hour of runtime, while running it in its high-power 'TURBO' mode with its wand and main floorhead drops its battery life to about 10 minutes. This lines up with its advertised battery life of 10 to 50 minutes, though it's worth noting that real-world battery life can still vary somewhat. The LED touchscreen display on the vacuum's body lets you monitor the battery's remaining charge.

The Wyze Cordless Vacuum has a couple of quality-of-life features. Its floorhead pivots for better maneuverability and features headlights to help you see when cleaning in darker areas. There are three suction modes that you can swap between by tapping on the LED touchscreen: the energy-efficient 'ECO' mode, the default 'MEDIUM' mode, and the high-power 'TURBO' mode. The touchscreen also shows a "Blockages or Brushroll" warning if the brushroll gets jammed or if a piece of debris becomes wedged in place.

The Wyze Cordless Vacuum has a few tools and accessories. There's a 2-in-1 combination tool that can be used as an upholstery tool or as a soft-bristle brush, as well as a crevice tool for clearing messes in tight corners. Its wand doesn't extend or collapse, but you can still use it to increase your reach.

Note: While it isn't included in the box, you can purchase a motorized turbo brush from Wyze's website.

You can use the Wyze Cordless Vacuum as a compact handheld vacuum by detaching its wand.

The Wyze Cordless Vacuum has good performance on bare floors. It's capable of dealing with pet hair and small debris like rice without an issue. However, it struggles a little with bulkier debris like cereal. Some of this kind of material can get stuck at the entry to the dustbin, and clearing cereal with its primary floorhead can pulverize it, scattering fragments around as you clean, but also making it easier to pick up later. Clearing bulky debris with its combination tool doesn't crush the material, so even more intact debris can get caught in the cyclone.

The Wyze Cordless Vacuum has great performance on low-pile carpet. It does a fantastic job cleaning pet hair and sucks up an amazing amount of fine debris like baking soda. It struggles a little bit more with larger material like sand, but its performance in this regard is still decent.

The Wyze Cordless Vacuum delivers superb performance on high-pile carpet. It easily cleans pet hair and sucks up the majority of larger material like sand. It's also relatively effective in dealing with fine debris like baking soda.

The Wyze Cordless Vacuum has good maneuverability. Its lightweight construction makes it easy to push and pull around, even in cramped environments. The LED strip on its floorhead helps you see what you're cleaning in dark environments, and it's easy to switch between different attachments. That said, you may need to rotate the handle when crouching to clean under tables and chairs to ensure that the floorhead lies flat against the ground. In addition, since there's no brushroll on/off switch, it can get stuck on rug tassels. Thankfully, the LED touchscreen does display a warning if the brushroll gets jammed.

The Wyze Cordless Vacuum is only available in one color variant: 'Steel Grey with Wyze green accents', and you can see our test unit's label here.

Let us know in the discussions if you come across another variant, and we'll update our review.

Compared To Other Vacuums

The Wyze Cordless Vacuum is a basic, budget-friendly cordless stick vacuum. It comprehensively outperforms relatively affordable alternatives like the JASHEN V16 or Simplicity S65S on most surface types and is very lightweight and easy to maneuver. However, it isn't the best choice for dealing with bulky debris like cereal, which can get stuck in its cyclone.

The Dyson V15 Detect is better than the Wyze Cordless Vacuum. The Dyson has a longer maximum battery life, has more tools and brushes, and performs better on bare floors and low-pile carpet. The Wyze, meanwhile, has fewer parts that require regular maintenance and weighs slightly less.

The Dyson V8 Animal and the Wyze Cordless Vacuum each have their advantages, so one may suit you better than the other depending on your needs. The Dyson comes with more tools and brushes in the box and delivers better performance on bare floors and low-pile carpet. Meanwhile, the Wyze has a longer battery life and performs better on high-pile carpets. Its main floorhead also has headlights to help you see what you're cleaning under chairs or couches.

The Wyze Cordless Vacuum is slightly better overall than the Simplicity S65S. The Wyze is easier to store, feels lighter, has a longer maximum battery life, and delivers better performance on bare floors as well as low and high-pile carpet. Conversely, the Simplicity has fewer parts that need regular cleaning, has a larger dustbin, and charges faster.

The Wyze Cordless Vacuum and Dyson V11 Animal each have advantages, and one may suit you better than the other, depending on your needs. The Wyze is notably lighter and clears more debris on low and high-pile carpet. Conversely, the Dyson has a longer battery life, a larger dustbin, and is more effective in dealing with bulky debris like cereal on bare floors.

The Roborock H6 Adapt and Wyze Cordless Vacuum are fairly evenly matched vacuums, though one may suit you better than the other depending on your exact needs. The Roborock has a longer battery life, a carpet detection feature, more tools and accessories, including an extension hose, and struggles much less with bulky material like cereal on bare floors. Conversely, the Wyze has fewer parts that need to be cleaned regularly as well as a bigger dustbin. It also performs better on high-pile carpet.

The Wyze Cordless Vacuum is better than the JASHEN V16. The Wyze weighs slightly less, has a longer maximum battery life, is easier to maneuver, and performs notably better on all surface types. Meanwhile, the JASHEN charges a little faster and comes with a motorized turbo brush in the box.