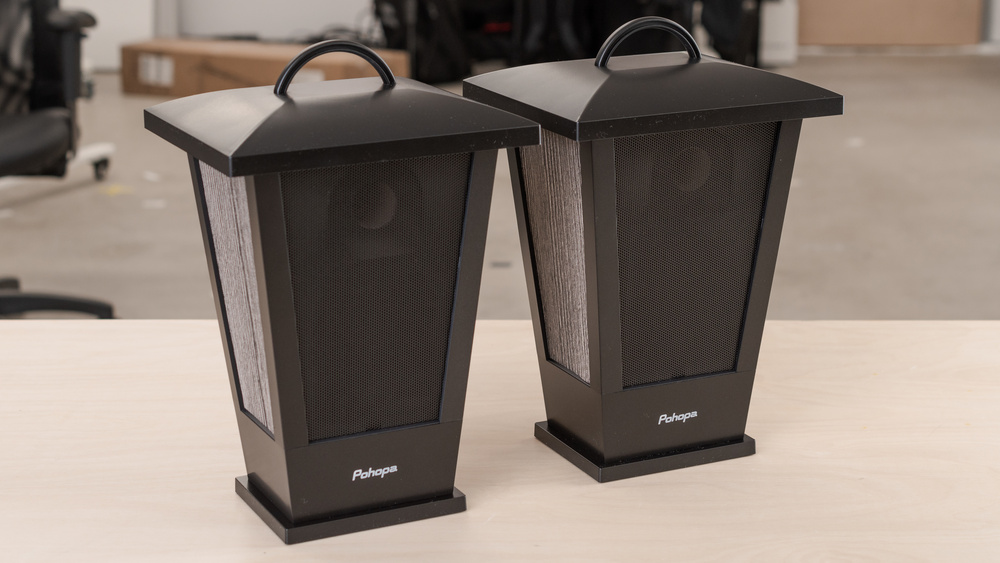 The Pohopa EF-B210G are unique outdoor speakers designed to look like lanterns that are advertised for indoor and outdoor use. They can pair to each other and are rated IP54 for dust and water resistance, though we don't currently test for this. They can have an outstanding Bluetooth range and a long battery life which is great for long days spent outdoors. They have a slightly boomy sound profile that can muddy vocals and lead instruments, while the overemphasized high-mids can make those same instruments a bit honky and harsh at times. Unfortunately, there aren't any sound customization features available.

The Pohopa EF-B210G speakers are passable for music. They have a slightly boomy sound profile that can muddy vocals and lead instruments, while the overemphasized high-mids can make those same instruments a bit honky and harsh at times. However, they also struggle to reproduce a thumpy low-bass, which is disappointing if you like bass-heavy music. That said, they can play stereo content, and though they don't get very loud, they don't have a lot of compression artifacts at max volume, so audio reproduction is clean and pure.

The Pohopa EF-B210G speakers are inadequate for videos and movies. They have an uneven sound profile lacking in low-bass which can make it difficult to feel the thump and rumble in action-packed movies. Its overemphasized high-bass can make your audio sound boomy, and the underemphasized low-mids can muddy vocals and dialogue. The overemphasized high-mids can also make those same vocals and dialogue sound honky and harsh at times. Their latency performance is likely too high to be suitable for watching videos and movies using iOS and Android devices; however, some apps compensate for latency differently, and your experience may vary. That said, there isn't a lot of compression at max volume, and they can play stereo content.

The Pohopa EF-B210G speakers are okay for podcasts. Their overemphasized high-mids make dialogue and vocals sound honky and harsh which can be disappointing if you enjoy listening to a lot of podcasts. They also have inadequate directivity, meaning your audio may not sound as clear from all angles. That said, they're very portable and don't have a lot of compression artifacts at max volume, so their audio reproduction is clear and pure.

The Pohopa EF-B210G speakers are alright for outdoor use. They have an outstanding Bluetooth range and a long battery life which is suitable for long days spent outside. They're very portable, and though they don't get very loud, they don't have a lot of compression at max volume. These speakers are also rated IP54 for dust and water resistance, though we don't currently test for this. That said, they have an uneven sound profile that's lacking in low-bass, so you may have trouble hearing the thump and rumble in bass-heavy audio. While the underemphasized low-mids can muddy the lead instruments and vocals, their overemphasized high-mids can make these same instruments and vocals sound honky and harsh at times.

If you come across another version, let us know in the discussions so we can update our review.

The Pohopa EF-B210G speakers are indoor and outdoor stereo speakers designed to look like lanterns. They can be paired to each other, are rated IP54 for dust and water resistance, though we don't test for this, and they even have LED lights that pulse to the beat of your music. They also have incredible battery life. However, they have an uneven sound profile, and they lack customization features, which can be disappointing for some listeners.

The Ultimate Ears WONDERBOOM 2 is a better overall outdoor speaker than the Pohopa EF-B210G speakers. It's better built, more portable, and has a better-balanced sound profile with an Outdoor mode EQ preset. However, the Pohopa speakers have a wider Bluetooth range and a longer battery life. They also come in a pair of two speakers that can be paired to each other, with unique lantern designs and LED lights which some users may prefer over the design of the Ultimate Ears.

The Pohopa EG-B210G Speakers are better than the Limitless Innovations TikiTunes. They are two speakers that can be paired to each other, with LED lights that alternate to the beat of your music. They have a slightly better-balanced sound profile and can get louder than the TikiTunes. However, the TikiTunes speaker has better directivity, so audio sounds clear from most angles, which makes it better suited for those who enjoy listening to podcasts.

The Pohopa EG-B210G Speakers are better outdoor speakers than the Alpine Corporation Solar Bluetooth Rock Speaker overall. They come in a pair of two speakers that can be paired together. They also have unique lantern designs with LED lights that alternate colors to the beat of your music. Unlike the Alpine, they can play stereo content without downmixing it to mono. They also get louder and have a more extended low-bass, though their sound profile is a bit uneven. They're also rated IP54 for dust and water resistance though we don't test for this. However, the Alpine has better latency performance with iOS and Android devices than the Pohopa speakers, and some users may prefer its rock-like design with a built-in solar panel.

The Pohopa EF-B210G Speakers are better speakers than the Theater Solutions B83GR overall. They come in a pair of two lantern speakers with LED lights that alternate to the beat of your audio. They also have a significantly longer battery life, and a better-balanced sound profile. Though the Pohopa speakers don't have a great soundstage performance, unlike the Theater Solutions, they can play stereo content. That said, the Theater Solutions can connect to over 99 additional B83GR speakers, and may be better suited for those with a larger outdoor space. Its rock-like design can also help it blend in with outdoor landscapes better.

The Pohopa EF-B210G are unique speakers designed to look like lanterns. They have LED lights all around the top, and wood print designs on their side and rear panels. For an outdoor-oriented wireless Bluetooth speaker that looks like a rock, check out the Theater Solutions B83GR.

The Pohopa EF-B210G speakers have an impressively portable design. Each one has a handle at the top, so you can carry one in each hand. They're also battery-powered, so you can use them on-the-go without having to plug them into an outlet.

Note: Our weight measurement is for both speakers.

Update 04/08/2021: We updated the review to reflect that the speaker has an IP5X rating for dust resistance

The Pohopa EF-B210G speakers are decently built. Though we don't test for this, they're rated IP54 for dust and water resistance, and the LED lights underneath their tops are covered by a plastic shield, though they aren't properly aligned on some areas on the Secondary speaker. Each speaker has an LED light on the rear, which indicates when it's connected to Bluetooth and when it's paired to the other one. They have a metal grille protecting their drivers and a panel with a wooden design covering their sides and rear. They also have a cover protecting their ports; however, it's important to note that only the Host speaker has an AUX port.

The controls are alright. To turn them on, press their power buttons once, and to turn them off, press and hold the power button instead. When both speakers are on, they connect automatically, the LED light on the rear of the Host speaker blinks blue, and the one on the Secondary speaker is solid green. The power buttons can also be used to play and pause audio by pressing them once while the speakers are on. You can also control the volume by pressing the "+" and "-" buttons on the Host. To skip to the next song, press and hold the "+" button, and to go back to the previous song, press and hold the "-" button. While there's some audible feedback when they're turned on and off, as well as when Bluetooth is pairing, there isn't any way to monitor their volume level.

You can use the LED button to turn the strip lights on. Pressing this button controls the lights on both speakers when they're paired to each other. The lights also stop alternating colors when your music is paused.

The Pohopa EF-B210G speakers have sub-par frequency response accuracy. They struggle to reproduce a thumpy, rumbling low-bass which can be disappointing to fans of bass-heavy music like EDM. However, there's an overemphasis in the high-bass that adds a boomy quality to your mix and can make vocals and lead instruments sound a bit muddy and cluttered. Finally, the overemphasis in the high-mid range can also cause those same vocals and instruments to sound a bit honky and harsh at times.

The Pohopa EF-B210G speakers' soundstage performance isn't bad. The directivity is disappointing, so your audio may not sound very clear from some angles. That said, they can play stereo content. When they're paired, the Host speaker is the left channel and the Secondary speaker is the right channel.

The Pohopa EF-B210G speakers have a very good dynamics performance. Though they don't get very loud, they also don't have a lot of compression artifacts at max volume, so your audio should sound clean and pure. That said, they probably aren't suitable for large parties.

Update 04/02/2021: While this speaker's advertised battery life is 15 hours, in our tests, it last for 60 hours. We retested the battery life several times to confirm that our results are accurate.

The Pohopa EF-B210G speakers have a very good battery performance. Though they're advertised to last for 15 hours off of a single charge, in our tests, they lasted for 60 hours, which is exceptional. They also have a power-saving feature that automatically shuts them off after about ten minutes without audio.

The Host speaker has an AUX port and a micro-USB charging port, though the Secondary speaker only has a micro-USB charging port. It's important to note that each speaker has a rear cover for its ports; however, they don't truly represent the correct ports of each speaker. Even though the covers say AUX IN or On/Off for both speakers, that doesn't correspond to the actual ports they're covering.

The Pohopa EF-B210G speakers' Bluetooth connectivity is okay. They have a disappointing latency performance, so they aren't suitable for watching movies and videos through iOS and Android devices. That said, they have a fantastic Bluetooth range, so your paired device should stay connected to the speakers even when you aren't very close.