By Becca Fischer
What it is: How accurately the soundbar reproduces audio with a 6-channel file that only has signal on the 3rd (Center) channel. When possible, soundbars are tested using a direct HDMI connection to the test PC. Otherwise, a direct optical connection or HDMI ARC through a TV is used for testing. Center is tested using the preset we selected and not with the full preliminary calibration.
When it matters: When a deep and powerful bass, clear dialogue/instruments, a large soundstage, and a loud and artifact-free sound is desired from the center channel. This only matters when the content is multi-channel (e.g. 5.1), like most movies and video games, but won't matter for stereo content (like most music) since they don't have a discrete center channel.
Score components:
Score distribution

When listening to multi-channel content like movies, video games, and TV shows, it's important to hear the dialogue clearly to follow the action. Some soundbars come with a third channel, known as the center channel; this is dedicated to reproducing the dialogue found in your audio content. A discrete center channel can significantly improve the quality of dialogue, helping you hear voices clearly and accurately.

If you want to hear the voices in your TV shows and movies clearly, look for a soundbar with a solid center channel performance. While many soundbars support a center channel, not all of them offer the same performance. Some soundbars lack a discrete center and have to use their left and right channels to simulate a phantom center, but this doesn't localize voices in the sound image as accurately as a discrete center. A discrete center channel also lets you adjust the volume of the dialogue independently from the rest of the mix. As with a stereo setup, the frequency response, volume level, and total harmonic distortion performances can also influence the way your audio sounds on the center channel. However, this is less important for music fans since most music is mixed into stereo and doesn't send a signal to the third channel.

To test the soundbar's center channel performance, we ensure that it only has a signal on the third channel. We measure its frequency response to get a better understanding of how well it can reproduce a variety of frequencies, from low-bass to high-treble. We also record how loud it gets, its total harmonic distortion at a normal listening volume of 80dB, and the THD at its max volume. These measurements can help show how clean and pure your audio reproduction is and whether your soundbar reproduces audio the way it was intended to be heard by the engineer who mixed it. We perform our center channel tests with a similar setup to our stereo channel tests. We use a room that's 18' (L) x 16' (W) x 9' (H), with one couch and minimal sound treatment to represent a typical living room. We place the soundbar and the table it sits on 7.5 feet away from our microphone array. We use a laser measuring tool to ensure that the microphone array, table, and the soundbar are at the appropriate distance from the side walls, as well as the subwoofer and the satellites if they're included in the setup.

What it is: Whether the soundbar has a dedicated center speaker (discrete) or uses the left/right speakers to create a sound in the front center of the soundstage (phantom center).
When it matters: When your content is multi-channel (e.g. 5.1), like most movies and video games, and you care about an accurate and clear representation of objects in the front center of the soundstage. A phantom center won't sound as clear and real as a discrete center. This won't matter for stereo content (most music) since they don't have a discrete center channel.

Most of the soundbars we've tested support an audio signal on the third, or center, channel. However, depending on the setup of the bar, they can reproduce this content in different ways. Localization shows how the center channel is supported by the soundbar and can make a difference when pinpointing voices in the sound image.

Many soundbars come with a dedicated or discrete center channel, which can more accurately localize voices to a pinpoint location in your sound image. However, other soundbars have phantom localization. This means that they use their left and right channels to simulate a phantom center. Unfortunately, this doesn't anchor the dialogue to the middle of the screen, so voices may seem like they're coming from a more general area.

What it is: The derivative of the logarithmic fit (regression line) of the frequency response. This value shows the overall tonal balance (tilt) of the sound as opposed to the std. err. value which shows the overall deviation. Negative values translate to a bass-heavy sound and positive values represent a treble-heavy sound. 0 (a flat slope) represents a balanced tone.
When it matters: When the overall balance between bass and treble is important to you.
Noticeable difference: 0.2

During our testing, we measure the frequency response of the soundbar when it's playing content on the center channel. We play a sine wave tone at -6 dB FS between 20Hz and 20kHz and plot its output, in dB, on a graph. The frequency response graph helps to show how accurately the soundbar reproduces audio content at different frequencies, from the low-bass to the high-treble. 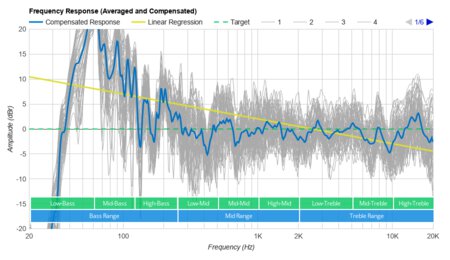 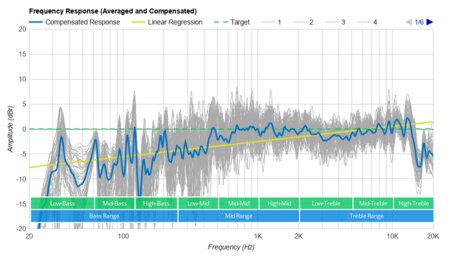 The slope of the frequency response graph helps demonstrate the overall tonal balance of the soundbar. For example, a negative slope means that the bar reproduces more bass than treble, so your audio may sound thumpy, punchy, or boomy. A positive slope shows more treble than bass, resulting in a bright, sparkling, or even piercing sound. A slope that's closer to zero means that the bar has a more balanced sound overall.

We don't score the slope of the soundbar's center channel. Depending on your personal preferences, you may prefer a bar with a different tonal balance. Some listeners like a more balanced, neutral sound since that's suitable for most types of audio content. Others may prefer a more bass-heavy sound, especially if they like to feel the deep thump and rumble in their audio.

Standard error is a measurement that shows the average deviation of the soundbar's in-room frequency response from the in-room target response. Essentially, it helps to show how accurately the soundbar can reproduce audio at different frequencies.

For our tests, we use the Harman in-room response curve as our target. It represents a frequency response found to be the most pleasing to the most amount of people, and it adds a little more emphasis in the bass range and a little less emphasis in the treble range. Ultimately, a lower amount of standard error is better since it tends to represent a cleaner, more even sound that's closer to the target curve. The Bose Soundbar 700 has a standard error of 1.98 dB on its center channel 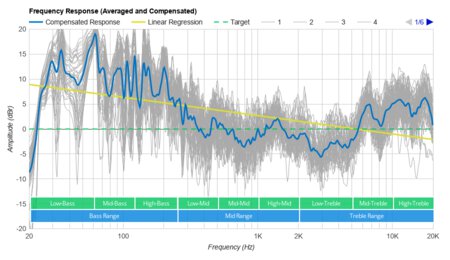 The Klipsch Cinema 400 has a standard error of 6.49 dB on its center channel

You can usually determine which soundbars have higher amounts of standard error just by looking at their frequency response graph. A graph that deviates from the middle a lot will usually have more standard error than a graph that's flat and close to the middle. Depending on where the fluctuations are located, you can also see how it will influence the overall sound. For example, deviations in the mid-range can muddy voices or push them towards the back of the mix, and fluctuations in the treble can make voices sound dull or piercing.

Since the center channel is specifically for dialogue, it's most important to see how the frequencies are reproduced in the mid and treble ranges, as this is where most voices are located. As a result, it may not be very noticeable if a soundbar struggles to reproduce a lot of bass on its center channel.

What it is: The SPL (sound pressure level) produced by the soundbar with its volume set to maximum. This value is measured and reported at 2.5 meters.
When it matters: When you want a soundbar for a large, crowded, or noisy environment, so it needs to get loud, but you don't necessarily care about how much the frequency response is degraded in the process.
Good value: >92 dB SPL
Noticeable difference: 1dB SPL
Score distribution

If you love to turn up the volume when listening to your audio, you'll want a soundbar that can get loud on its center channel. Sound Pressure Level @ Max Volume is a measurement that shows how loud the soundbar can get. We record it in decibels (dB) using a microphone array.

We consider a good value to be above 92 dB SPL since this gives you more flexibility when you want to crank up the volume. That said, depending on your personal preferences, you may want a soundbar that gets even louder on the center channel. Some soundbars, like the Nakamichi Shockwafe Ultra 9.2Ch, can reach volumes of above 100 dB SPL on the center channel.

What it is: The total harmonic distortion produced by the soundbar at 80dB SPL. To make the score more perceptually relevant, more weight is given to the higher frequencies. This value is measured and reported at 2.5 meters.
When it matters: When a pure and clean sound is desired at moderate listening levels. Harmonic distortion is relatively difficult to hear, so it should only matter to those who care about the fidelity of sound reproduction.
Good value: <0.7
Noticeable difference: 0.1
Score distribution

Total harmonic distortion, or THD, shows the number of unwanted frequencies that a soundbar reproduces alongside the intended frequencies. Essentially, it compares the input (the TV show, music, or movie you're playing) with the output (the audio played by the soundbar). THD is important for listeners who care about the fidelity of audio reproduction since a low amount of THD means that audio is reproduced the way it was intended to be heard by whoever mixed it.

For this test, we measure the amount of THD when the bar is set to a normal listening volume of 80dB. Then, we apply a spectrally pure sine wave and use the microphone array to measure the output. Our measurement is weighted, meaning that it adds a little more weight to higher frequencies since you're more likely to perceive distortion at those frequencies. We consider a good value to be below 0.7, but THD can be difficult to hear with real-life content.

What it is: The total harmonic distortion produced by the soundbar at its maximum volume. To make the score more perceptually relevant, more weight is given to the higher frequencies.
When it matters: When a pure and clean sound is desired with the soundbar set to is maximum volume. Harmonic distortion is relatively difficult to hear, so it should only matter to those who care about the fidelity of sound reproduction.
Good value: <1
Noticeable difference: 0.1
Score distribution

Some listeners may like to crank up the volume on their soundbar, especially if they want their audio to fill up a large space. We measure the amount of total harmonic distortion when the bar is pushed to its max volume. Our THD measurement gives more weight to higher frequencies since you're more likely to perceive distortion in those frequencies.

Most of the soundbars we've tested see a jump in THD when the soundbar is pushed to its max volume. However, a soundbar should maintain clear and pure audio reproduction as long as the THD remains below one. THD can be very difficult to hear with real-life content, so this measurement is mostly for listeners who care about the fidelity of audio reproduction.