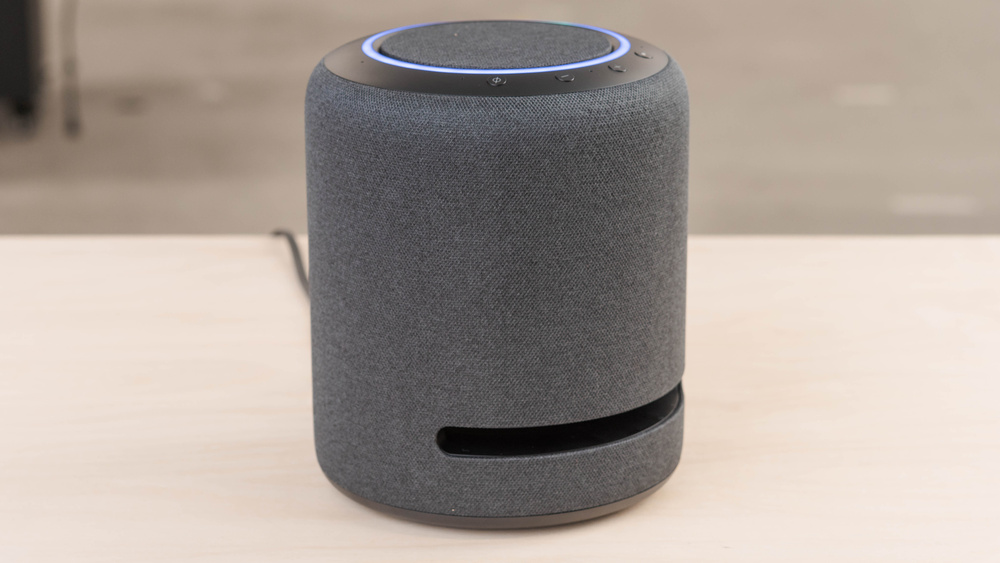 The Amazon Echo Studio is a wired smart speaker. It has a Zigbee hub built-in, which allows you to connect other compatible smart home devices like light bulbs or thermostats to the speaker and control them using Alexa built-in voice assistant. This voice assistant has excellent overall performance and can understand your commands, even if you're far away. This speaker can also get loud, offers bass and treble sliders if you prefer a different sound profile, and supports 3D audio, although you need a subscription to Amazon's music streaming app to get the full experience of this feature.

The Amazon Echo Studio is decent for music. It has a neutral and balanced sound profile but lacks low-bass, so genres like EDM and hip-hop sound less thumpy. That said, it has bass and treble sliders in its companion app so you can tweak its sound to your liking. It can also play stereo content and get loud with minimal compression artifacts at max volume. While it supports 3D audio, you need to have a subscription to Amazon Music HD to access this feature.

The Amazon Echo Studio is mediocre for videos and movies. Although it lacks low-bass, which makes sound effects in action movies lack thump and rumble, it has a fairly neutral sound profile suitable for clear dialogue. It can also play stereo content and can get loud with minimal compression at max volume, so your audio sounds clear. It's also advertised as compatible with the Fire TV Cube (2nd gen) or Fire TV Stick 4K if you want Dolby Digital 5.1 or Dolby Atmos content. However, we don't currently test this feature.

The Amazon Echo Studio is passable for podcasts. It has a neutral sound profile that's suitable for vocal-centric content, although a slight underemphasis in the treble range makes sibilants like S and T sounds a bit dull. That said, it isn't very portable as it can only be used wired, and it doesn't support multi-device pairing. It also has a somewhat narrow soundstage, so your audio may not sound clear from all angles.

The Amazon Echo Studio is very good for voice assistant. It has Alexa built-in, and it can register your commands, even if you're far away. However, it has a bit more of a problem understanding you in a noisy environment. That said, you can use Alexa to connect other smart devices that use Zigbee in your home to your speaker, and it has a dedicated mic mute button if you don't always want the speaker to be listening to you.

The Amazon Echo Studio is a wired speaker and isn't suitable for outdoor use.

The Amazon Echo Studio is a cylindrical speaker with two openings near its bottom side for its bass aperture. It can only be placed vertically. There's also a light ring on its top side, which lights up for voice commands or mic mute. However, you won't be able to customize its lighting.

The Amazon Echo Studio has poor portability. It can't be carried with only one hand and it isn't battery-powered, so it needs to be connected to a power source for it to work.

The Amazon Echo Studio has an unremarkable build quality. There's a tight fabric covering most of the speaker while a plastic ring houses the control buttons on the top side. Overall, the speaker feels sturdy and solid. However, it lacks an IP rating for dust and water resistance, so you should be careful if you plan to use it around water.

The Amazon Echo Studio has mediocre controls. There are four physical buttons located on its top side. You can mute the microphone and control the volume. When you press the 'Mic Off' button, the light ring turns solid red, and if Alexa is listening to you, the light turns blue. There's also an 'Action' button that allows you to manually activate Alexa or, if you press and hold this button for 20 seconds, you can reset your device without losing your smart home connections. However, this speaker lacks music or call-related calls, which some users may find disappointing.

The Amazon Echo Studio has alright frequency response accuracy. It has a balanced and neutral sound profile that's suitable for a variety of audio content. However, it lacks low-bass so more bass-heavy genres like EDM and hip-hop lack thump and rumble. If you prefer a different sound, this speaker has bass and treble sliders.

Note: We tested this speaker with the 'stereo spatial enhancement' feature on, which is also its default setting. This feature is advertised to enable a more immersive listening experience by creating a 3D sound. It should be noted that some users originally reported issues with this feature as it made their audio sound echo-y. Amazon later released firmware version 338972762, which may have improved its performance. We tested this speaker with firmware version 4463523716. If you prefer, you can also turn this feature off through the companion app. This speaker is advertised to support both Dolby Atmos and Sony's 360 Reality Audio content. At the moment, however, if you like Ultra HD audio, this speaker can only stream this content using Amazon's Music HD streaming service.

The soundstage is decent. The speaker can play stereo audio, which results in a more immersive sound. However, its directivity is just okay, so its soundstage is perceived as a bit shallow and narrow. For a speaker with better directivity, consider the JBL Pulse 4.

The Amazon Echo Studio has great dynamics. It can get louder than the Bose Home Speaker 300, and there are minimal compression artifacts at max volume, so your audio sounds clear, even at high volumes.

The Amazon Echo Studio doesn't have a battery and only works when it's plugged into a wall socket.

This speaker has excellent voice assistant support. It has Alexa built-in, which you can activate with your voice. The speaker can understand your commands, even when you're far away. However, it has a harder time hearing you if you're in a noisy environment. You can also mute the speaker's mic if you don't want the speaker to hear you.

The Amazon Alexa app is outstanding. It has bass and treble sliders, so you're able to adjust its sound. You can also pair two Echo Studio speakers together to create a stereo pair, as well as connect several units to cover a large room or play audio in multiple rooms of your home. If you're looking for a speaker with a graphic EQ and presets, consider the Yamaha MusicCast 50.

The Amazon Echo Studio has a 3.5mm AUX port so you can wire your smartphone directly to the speaker to play audio. There's also a mini optical line-in as well as a micro-USB port. The micro-USB port can be used with an Ethernet adapter to facilitate a wired network connection.

The Amazon Echo Studio has alright Bluetooth connectivity. It can only be paired with one device at a time and it has high latency on iOS and Android, so it may not be a suitable choice for streaming videos. Some apps compensate for latency though, so your real-world experience may vary. On the upside, it has an outstanding range, so you can still be connected to the speaker, even if you're far away.

This speaker is Wi-Fi compatible. However, it doesn't support Apple AirPlay or Google Chromecast connectivity. If you're looking for a speaker that supports Apple AirPlay, try the Sonos One Gen 2 or the Bose Home Speaker 500.

The Amazon Echo Studio comes in one color variant: 'Charcoal'. You can see the label of our model here. If you come across another variant, please let us know in the discussions and we'll update our review.

The Amazon Echo Studio is a smart speaker designed for home use. Since it's wired, it's not really meant to be used outdoors. However, it can be used as a hub for other Zigbee-compatible smart devices, and it has Alexa built-in, which offers excellent overall performance. Unlike many other home speakers like the Google Nest Audio, it also supports 3D audio such as Dolby Atmos and Dolby Digital 5.1. However, this feature is fairly restrictive as it can only be used with compatible devices like the Fire TV Stick 4K or with a subscription to Amazon's Music HD service. That said, it offers a balanced sound profile and can get loud with minimal compression. Check out our recommendations for the best home speakers, the best Bluetooth speakers, and the best Bluetooth speakers under $100.

The Bose Home Speaker 500 is a better speaker than the Amazon Echo Studio. The Bose is better-built and it has a better soundstage performance. It supports Apple AirPlay, and it has lower latency when paired with iOS and Android devices over Bluetooth. Also, its voice assistant does a better job understanding you in noisy settings. However, the Amazon gets louder with less compression at max volume.

The Apple HomePod is a better smart speaker than the Amazon Echo Studio. The Apple has better controls, a more neutral sound profile, and a wider soundstage. It also has low latency on Apple AirPlay. However, the Amazon supports Bluetooth, has bass and treble sliders so that you can tweak its sound profile, and has a mic mute button. It also gets louder with minimal compression.

The Google Home Max is a slightly better speaker than the Amazon Echo Studio. The Google has a better-balanced sound profile and can reproduce a bit more low-bass. It has Google Assistant built-in, and it does a better job of understanding your voice in noisy environments. It can also be paired with up to two devices at the same time, and it supports Google Chromecast. However, the Amazon has fewer compression artifacts at max volume.

The Amazon Echo Studio is a better speaker for most uses than the Google Nest Audio. The Amazon has a better-balanced sound profile, it can play stereo content, and it gets louder with minimal compression artifacts. However, the Google is a better speaker for voice assistants. It has better controls, its Google Assistant has better overall performance, and it supports Chromecast.

The Amazon Echo Studio is a better speaker for most uses than the Sonos One Gen 2. The Amazon can play stereo content, can get louder with fewer compression artifacts, and it supports Bluetooth. It also has a better voice assistant performance. However, the Sonos has better controls and can reproduce a bit more low-bass. It also supports Apple AirPlay.

The Bose Home Speaker 300 and the Amazon Echo Studio have different strengths and depending on your usage, you may prefer one over the other. The Amazon can get louder and play stereo content. Its companion app also offers more features. However, the Bose supports Apple AirPlay, has a lower Bluetooth latency on iOS and Android, and has an outstanding voice assistant performance.

The Amazon Echo Studio and the Yamaha MusicCast 50 are similar speakers. The Amazon offers excellent voice assistant support with Alexa built-in and does an excellent job of understanding your commands from far away. It has better directivity, resulting in a wider-sounding soundstage. It also has a built-in Zigbee hub, so you can connect it to compatible smart home devices like lightbulbs or thermostats and control them using Alexa. You can connect the Yamaha to MusicCast-compatible devices like MusicCast soundbars. It can also get louder than the Amazon and is more customizable thanks to the graphic EQ and presets featured in its MusicCast app.

The Sony SRS-RA3000 and the Amazon Echo Studio have different strengths. The Amazon has excellent voice assistant performance, with Alexa built-in. It has a built-in Zigbee hub you can use to control other smart home devices like lightbulbs or thermostats. The Sony has a much better soundstage performance, and it features a graphic EQ and presets, making it more customizable than the Amazon.