Frequency response is a measure of the magnitude of the output of a system compared to its input, as a function of frequency. In other words, it describes how accurately a system reproduces each frequency of an audio content, in terms of amplitude. For example, for an input signal that has three frequencies of equal amplitude (say, 100Hz, 1kHz, and 10kHz, all at -6dB FS), a headphone with a neutral frequency response would output a signal that, just like the input, has equal amplitudes at 100Hz, 1kHz, and 10kHz.

We evaluate the frequency response of headphones from 10Hz to 22kHz, which is then broken down into three different frequency bands: bass, mid, and treble. Each headphone is measured/re-seated multiple times, and the final frequency response plot is the average of those multiple measurements.

Having a good frequency response is important for all headphones, regardless of their use case, since it has the largest effect on their perceived sound quality. However, the role of sound quality is more crucial for some use cases such as critical listening and gaming, compared to sports/fitness or commute/travel where stability or noise isolation may be more important. 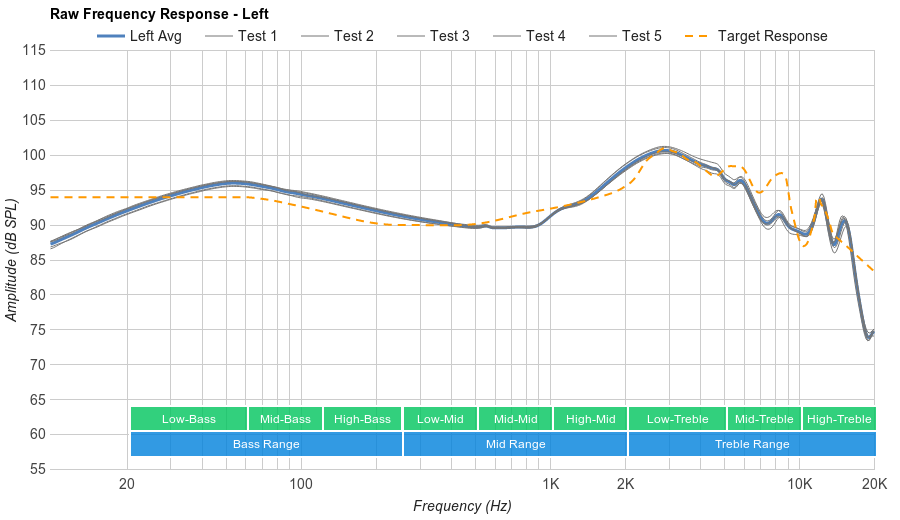 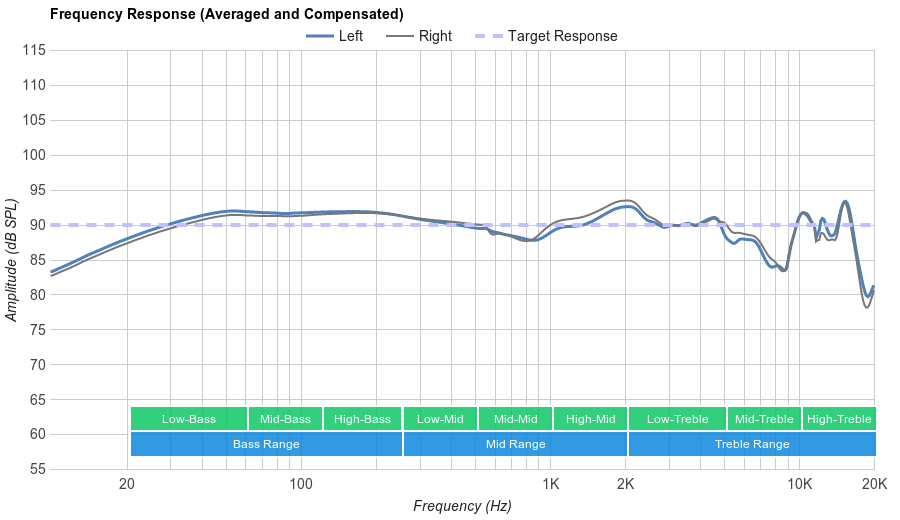 The signal level is calibrated post-compensation (i.e. after being flattened by applying the target response) using a periodic pink noise limited between 250Hz and 2kHz. The resulting sound pressure level is measured and calibrated with the SPL meter in Room EQ Wizard (REW), which is set to C-weighting and Slow.

Each headphone is measured/re-seated multiple times. The reason for this is that some factors, like the position of the headphone on the head or wearing glasses, can cause variations in the measured frequency response. The final frequency response plot is the average of these multiple measurements. In-ears/earbuds are measured 5 times only on the HMS (Head Measurement System), but over/on-ear headphones are measured/re-seated 5 times on our dummy head (HMS) for the mid and treble ranges, and 5 times on 5 human subjects for the bass range. We decided to measure the bass of over-ear and on-ear headphones on human subjects since most dummy heads available today have ears that are larger and stiffer than the average human ear, and therefore, a lot of headphones (especially closed-back ones) fail to achieve a proper and an air-tight seal on them5. This results in measurements that don't match the headphone's performance on humans. For more information, check out our article and video on headphone frequency response consistency. 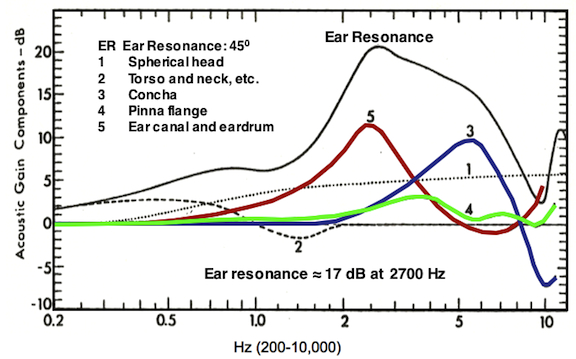 The Free Field and Diffuse Field target curves attempt to solve this issue by taking the frequency response of a dummy head, measured either in a free field (anechoic chamber) or a diffuse field (reflective chamber), as the "flat" reference. This way, the resonances of the pinna and the ear canal will be included in the target response, which allows for the flattening of the headphone's frequency response by deducting it from the target response. However, the shortcoming of the FF and DF target responses is that they are based on the response of a dummy head in a test environment, and don't really replicate the sound that headphones are compared to, which is the sound of a pair of loudspeakers in a room. Therefore, headphones tuned to the FF or DF targets tend to be perceived as too bright and lacking in bass. This is because when a pair of speakers that measure flat in an anechoic room are placed in a regular room in a stereo setup, they tend to interact with the acoustics of the room. One of the more significant results of this interaction is a few dB of buildup in the bass range6.

As a solution, and based on the idea that a good headphone would sound like a good stereo speaker setup in a good room, the Harman target response was proposed by Sean Olive, Todd Welti, and others at Harman7,8,9. This target response is based on the frequency response of a dummy head captured in a critical listening room10. This way, both the bass buildup and the ear resonances will be included in the target response, and a headphone tuned to this target will sound more well-balanced compared to the DF and FF targets, since it will have more bass. It should be noted that initially the Harman target response was developed for over/on-ear headphones, and future studies showed that the preferred target response for in-ears would require an additional 5dB of boost in the bass range11,12.

The smoothing used in our plots and calculations is 1/12 Octave, since this amount of smoothing removes the very fine fluctuations in the frequency response that are not perceptible by the human hearing, while preserving the details that are audible to humans. The next step in evaluating the frequency response of a headphone is "flattening" it by applying the target curve to it, and then, it is level-matched to 90dB between 20Hz and 20KHz. That is, the overall level of the headphone's frequency response is adjusted in such a way that its average value equals to 90dB. This way, the response will have the best chance at scoring well in our calculations.

For more information, check out our video on frequency response measurements, bass inconsistencies, and target curves: