The Brother HL-L2390DW is an all-in-one monochrome laser printer compatible with Brother's TN730 and TN760 (high-yield) toner cartridges. It has Wi-Fi and USB connectivity, supports Apple AirPrint and Mopria Print Service, and works with Brother's iPrint&Scan mobile companion app. It only has a flatbed scanner with no automatic feeder, duplex scanning, or fax functionality. It supports automatic duplex printing, and its input tray holds 250 sheets of paper.

The Brother HLL2390DW is decent for family use if your household only prints black and white documents; however, it isn't ideal if you want to print photos or any color documents since it's a monochrome laser printer. On the upside, its ink cartridge yields a large number of prints, and replacement toner is cheap, which helps keep your maintenance costs low. It has wired and wireless connectivity options, making it easy for every household member to access, and it's compatible with Brother's feature-rich mobile app, meaning you can print or perform maintenance tasks right from your smartphone.

The Brother HL-L2390DW is sub-par for home or small offices. Although it has a high page yield and fast printing speed, it can only print in black, which is very limiting. Also, it lacks an automatic document feeder and duplex scanning capability. This model doesn't have Ethernet connectivity, but its variant, the Brother HL-L2395DW, does.

The Brother HL-L2390DW is okay for students. Its toner cartridge yields a large number of pages before needing replacement and is relatively cheap, so it isn't expensive to maintain. Also, it doesn't take long to warm up and prints quickly at up to 32 pages per minute, which is great for printing those long essays. The downside is that you can't print anything in color.

The Brother HL-L2390DW is great for printing black and white documents. It has a high page yield, so you don't need to replace the toner cartridge often, and the cartridge is relatively cheap, which helps keep maintenance costs low. It also prints quickly and supports automatic duplex printing. However, it lacks an automatic document feeder and duplex scanning capability.

The Brother L2390DW isn't designed for photo printing. It can't print in color, and the print quality is terrible as pictures look grainy and lacking in detail.

We tested the Brother HL-L2390DW in black. There's only one other variant, the Brother HL-L2395DW, which is the same printer but with Ethernet connectivity, a larger color display, and faster printing speed. Our review applies to both models.

Compared To Other Printers

The Brother HL-L2390DW is among the best monochrome laser printers on the market. However, its lack of an automatic document feeder and duplex scanning might be a dealbreaker for offices that regularly scan multi-page and double-sided documents.

For more options, check out our recommendations for the best all-in-one printers, the best printers for small businesses, and the best laser printers.

The Brother MFC-L2750DW and the Brother HL-L2390DW are very similar monochrome laser printers. The MFC-L2750DW has more features, like NFC support and an automatic feeder with duplex scanning. It also yields more pages per cartridge and prints slightly faster.

The Xerox B210/DNI and the Brother HL-L2390DW are similar black-and-white laser printers. They both have high black page yields, low cost-per-prints, and fast printing speeds. However, if you're looking for a printer for office use, the Brother includes a scanner, while the Xerox doesn't.

The Brother HL-L2390DW is better than the HP LaserJet Pro M15w for most uses. The Brother has a scanner, prints much faster, and supports automatic duplex printing. However, the HP yields more prints, so you won't have to replace the toner cartridge as often as on the Brother.

Type All in One

The build quality is excellent. It's entirely plastic but feels solid, with no obvious gaps in the construction. It has a rear panel giving easy access to paper jams and grooves on each side for easy moving. The paper tray cassette can expand for both longer formats and different widths, and the scanner's lid hinges can extend to accommodate thicker items like textbooks. Unfortunately, the power cord isn't removable, making it difficult to replace if damaged.

This printer doesn't take up an excessive amount of space on a desk but is fairly tall. The Brother HL-L2395DW is identical in size and weight.

This printer has a small, two-line LCD back-lit display. It has poor viewing angles, so it's hard to see from the sides, above, or below, and the panel doesn't tilt or swivel. On the upside, the settings menu is relatively easy to navigate. The Brother HL-L2395DW variant has a larger, touch-sensitive color display, as well as more buttons to help you navigate.

The toner cartridge yields a large number of prints, so you won't need to replace it often unless you print a lot, and you can get an XL toner cartridge (TN760) that'll last even longer. The drum is a separate unit that you'll have to replace, but not as regularly as the toner because it's usually good for around 12,000 prints.

This printer only has a flatbed scanner, so scanning long, multi-page documents can be extremely time-consuming. The lid hinges extend about an inch, making it easier to close the lid over thicker items like textbooks. If you need a scanner with an automatic document feeder, check out the Brother MFC-L2710DW.

The overall printing speed is outstanding. It doesn't take long to warm up and prints very quickly. The photo printing time is the time it takes to print an 8.5" x 11" photo, as the printer doesn't support a 4" x 6" format. The Brother L2395DW variant prints black documents faster at up to 36 pages per minute. If you want a printer with faster printing speed and bigger input trays, check out the HP LaserJet Enterprise M507dn.

This printer can only print in black.

This printer isn't meant to print photos. The print quality is bad, as the picture looks grainy and lacking in detail. We tested the photo printing on basic 8.5" x 11" paper because it can't print on glossy paper.

In addition to the main input tray, there's a single-sheet manual feeder on the front with width sliders. The output tray holds up to 100 sheets of paper.

This model doesn't have Ethernet connectivity, but its variant, the Brother HL-L2395DW, does. 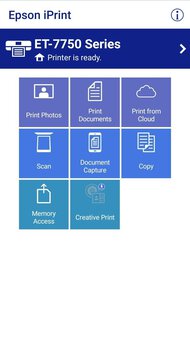 Brother's iPrint&Scan mobile companion app is superb. You can use it to print, scan, and copy documents directly to your phone. You can also perform maintenance tasks like checking the ink level and firmware updates.