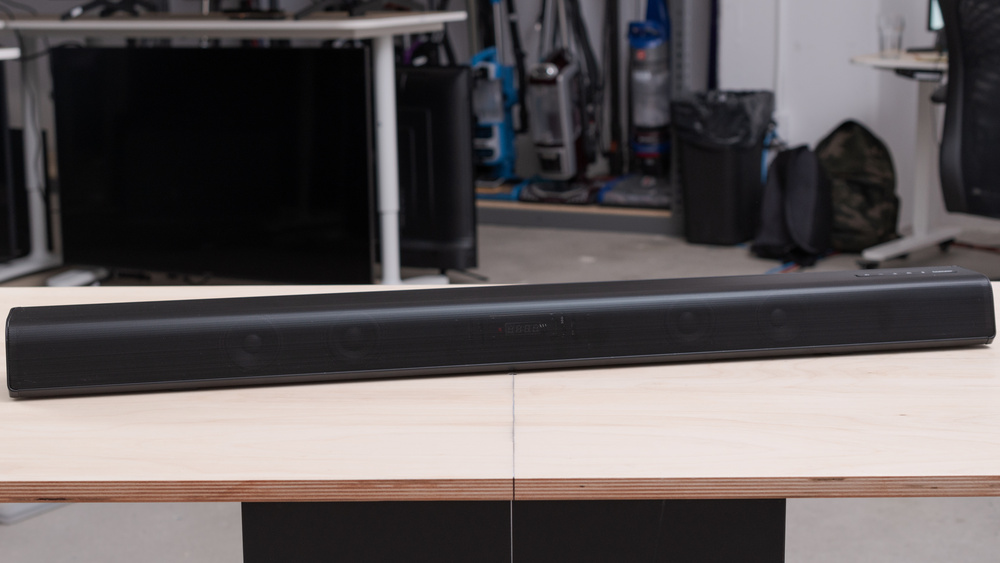 The BOMAKER Odine II is a poorly performing budget-level soundbar. This 2.0 setup is pretty barebones in terms of features as it doesn't have center, surround, or height channels. It really struggles to produce bass, and even though it offers three EQ presets and a virtual surround feature, there's no separate bass adjustment level to help even out its sound profile. Although it has a wide array of physical inputs, including an HDMI ARC port, it has to downsample all audio into PCM 2.0, which is disappointing. It's not all bad, though. Despite not having a center channel, it's able to reproduce vocals and dialogue reasonably well. It can also get very loud, even if there's some compression present at max volume.

The BOMAKER Odine II is poor for mixed use. It struggles to produce a satisfying bass, making it ill-suited for movies or music. While it has three EQ presets that may help its sound out a bit, they're still quite limited in scope. Since the bar also lacks center, surrounds, and height channels, it doesn't create the most immersive sound. Even though the bar has an HDMI ARC port, it has to downsample its supported audio formats into PCM, which is disappointing. That said, the bar can get loud, and you can stream audio to it using Bluetooth. It also has a dialogue enhancement feature to help improve vocal-centric content.

The BOMAKER Odine II is okay for dialogue and TV shows. Although it doesn't have a center channel, it has a fairly flat and well-balanced mid-range, which helps it produce clearer vocals. It also has a dialogue enhancement feature that can further improve vocal clarity. You can even stream your favorite podcasts or audiobooks to the bar via Bluetooth. There's no auto-volume or night mode, though, which is to be expected from an entry-level bar.

The BOMAKER Odine II is poor for music. This soundbar lacks bass, and as a result, it sounds bright, which isn't ideal for genres like EDM and hip-hop. There are three EQ presets that may help it a bit, but its overall sound enhancement features are quite limited. Its stereo soundstage isn't very wide either, and its focus is diffused, which isn't good if you want to be immersed in your favorite tunes. On the upside, it can get loud enough to fill a large room or a crowded environment.

The BOMAKER Odine II is bad for movies. Its sound profile isn't suited for movies at all, as it lacks bass. Even though there are three EQ presets to help compensate for its default sound, there isn't a separate bass adjustment level. Its stereo soundstage is also slightly smaller than the bar itself and its focus is completely diffused, so movies may not sound very immersive. This soundbar doesn't have center, surround, or height channels, and all content is downsampled into PCM to play it.

Compared To Other Soundbars

The BOMAKER Odine II is a budget-level 2.0 soundbar. Just like the AmazonBasics 2.1 Channel Bluetooth, it lacks center, surround, and height channels, and it has pretty limited sound enhancement features. Unlike a lot of other budget-level 2.0 setups, it has an HDMI ARC port, but it downsamples the audio formats it supports into PCM. If you're looking for more soundbars, check out our recommendations for the best budget soundbars, the best soundbars under $200, and the best soundbars for dialogue.

The BOMAKER Odine II is a better budget soundbar for dialogue and TV shows than the AmazonBasics 2.1 Channel Bluetooth. The BOMAKER feels better built, it can get much louder with less compression, and it has a virtual surround feature. While it's really lacking bass, it has a more neutral mid-range, which helps out vocals. However, the AmazonBasics can play Dolby Digital via its Optical In, and it produces much more bass, even though it's still lacking in this department.

The LG SK1 is a better overall 2.0 soundbar than the BOMAKER Odine II. The LG is better built, its sound profile is more neutral, and it has a center channel. It can also downmix surround content into stereo, and it can support Dolby Digital over its Optical In port. However, the BOMAKER has a dialogue enhancement feature, and it can get louder, albeit with a bit more compression.

The BOMAKER Odine II is a better soundbar than the TCL Alto 3. The BOMAKER gets louder, and it has a better-balanced sound profile, though both bars have a dark sound that's lacking low-bass. However, the TCL is better-built, and unlike the BOMAKER, it can play surround content, though it has to downmix it to stereo.

The Insignia NS-HSB318 2.0 is a better overall performing soundbar than the BOMAKER Odine II. While both soundbars are very similar in terms of build quality and downsampling audio formats into PCM, the Insignia is able to produce a bit more bass, and it has a Bass Boost feature, which is a nice touch. In comparison, the BOMAKER has more inputs as well as a virtual surround feature.

The BOMAKER Odine II is a better 2.0 budget soundbar for dialogue and TV shows than the TaoTronics TT-SK023. The BOMAKER has a dialogue enhancement feature which can help improve vocal clarity, it can get much louder than the TaoTronics, and it also has a virtual surround feature. Although both soundbars downsample into PCM 2.0, the BOMAKER is able to do this over its HDMI ARC port, which the TaoTronics lack. That said, the TaoTronics has a more neutral and even sound profile as it can deliver somewhat more bass, and it feels better built.

The Samsung HW-Q950A and the Bomaker Odine II are two very different setups. The Samsung is a very premium 11.1.4 setup that, unlike the Bomaker, supports surround sound and height content. It comes with a dedicated sub and satellites, and it reproduces more bass out-of-the-box. Also, there are more sound enhancement features available. Meanwhile, the Bomaker is a standalone bar that only supports 2.0 PCM content.

The BOMAKER Odine II is a rhombus-shaped soundbar that stands out from other, more traditionally shaped soundbars. It has a thin metal grille covering its top and front sides while the rest of it is smooth black plastic. There are two openings on its sides that the manufacturer calls its Bass Reflex Ports.

This soundbar doesn't have satellite speakers.

The BOMAKER Odine II is a slightly long soundbar, and it most likely won't fit between the legs of a 55" TV. However, it shouldn't block your TV screen unless your TV sits flush on the table.

This soundbar doesn't have satellite speakers.

The back of this soundbar is slightly angular. It has one opening for the power cable and inputs. You can also wall-mount this soundbar with the included screws and wall-brackets, but it won't lay completely flush with the wall.

This setup doesn't have satellites.

The BOMAKER Odine II has an only okay build quality. The bar is mostly thin black plastic. There's also a thin metal grille covering its top and front sides, but if you put pressure on the grille, its front bottom can cave inwards. Luckily, it flexes back in place, but this design isn't a particularly nice feature.

The BOMAKER Odine II has a bad stereo frequency response. It completely lacks bass and sounds bright, even though its treble is also underemphasized. While it's a poor choice for most audio content, it could be more suitable for podcasts or audiobooks. It also comes with a few EQ presets ('General', 'Voice', and 'Treble') that may better suit your preferences.

The BOMAKER Odine II has a sub-par stereo soundstage. Its soundstage is a little bit smaller than the bar itself and its focus isn't good either, which makes it difficult to pinpoint the exact location of sound in your room.

Update 09/21/2020: We've discovered a value input bug that would cause the Dynamics box results to be slightly off. All soundbars reviewed since January 30th, 2020 have been updated.

The BOMAKER Odine II has excellent stereo dynamics. It can get pretty loud, which is well-suited for large or crowded rooms. However, there are some compression artifacts and thumping present at max volume.

The THD performance of this soundbar is passable. It produces a clean and pure sound at a normal volume. However, at max volume, there's a large jump in THD and you may notice it.

The BOMAKER Odine II doesn't have a center channel and it can't decode or downmix surround sound content to stereo.

This soundbar doesn't support surround channels and can't downmix into stereo. If you're looking for a 2.0 setup that supports surround content, check out the TCL Alto 3.

This soundbar has terrible sound enhancement features. It only has three EQ presets: 'General', 'Voice', 'Treble'. The 'Voice' preset also acts as a dialogue enhancement feature. There's also a 3D surround mode, but we don't currently test the performance of this feature.

While the BOMAKER Odine II has a wide array of inputs such as an HDMI ARC port, it can't play any audio format except for PCM, which is pretty disappointing. On the upside, there's an AUX input, so you can play music from older devices.

Although the BOMAKER Odine II has an HDMI ARC port, it can't play any audio format over this input except for PCM 2.0. To play this content, you need to change your TV's settings to PCM. After doing this, Dolby Digital, Dolby Digital+, and DTS files are downsampled into PCM 2.0, which doesn't sound as immersive.

This soundbar doesn't have a Full HDMI In port.

Just like the TaoTronics TT-SK023, the BOMAKER Odine II only supports PCM formats over its Optical In. To play PCM using this input, you have to specify it in your TV settings. 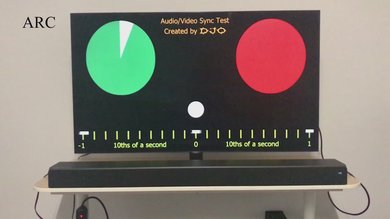 This soundbar has mediocre wireless playback options. You can stream your audio from your phone or tablet via Bluetooth, and that's about it.

This soundbar doesn't have an HDMI port so it can't support 4k passthrough.

The BOMAKER Odine II doesn't have any satellites.

The BOMAKER Odine II has a small LED screen behind the front grille. It displays your input, volume level, and EQ presets. A solid red light turns on when the bar is off, and if you mute it, the input you're currently on flashes on the display.

This soundbar has five buttons found on its top right side. You can turn the bar on/off, adjust the volume, and change inputs. There's also a Bluetooth button that allows you to pair and disconnect your device to the bar.

This soundbar comes with a remote to control all of its functions. Using it, you can switch inputs, adjust volume, and switch EQ presets. There's also a reset button that allows you to clear all your settings, which is handy.

This soundbar doesn't have a companion app.