Headphones break-in, or burn-in, refers to the idea that the sound of headphones tend to change over time and certain headphones need to be used for a while before they settle into a more optimum sound. This, in part, stems from the experience of some listeners that some headphones may sound loose (in the bass) or harsh (in the treble) in the beginning, but seemingly sound more warm and tight after some use. An analogy for explaining this effect would be shoes, as they tend to feel hard and rather uncomfortable in the beginning, but become softer and more comfortable over time. To test this idea, we purchased four brand new headphones of different types and put them under a stress test.

The headphones selected for this test were brand new models of AKG Q701, Audeze LCD 2 Classic, Beyerdynamic DT 1770 Pro and Etymotic HF5. The reasons for selecting these headphones were to test headphones that have a reputation for requiring burn-in. We also wanted to test headphones with different types of transducers (dynamic, planar magnetic, and balanced armature) to see if the transducer type is a factor in headphones break-in. The AKG Q701 is an open-back over-ear with dynamic drivers and is very closely related to the K701. This model is widely reported to require a good amount of break-in before settling in into its sound. The Audeze LCD 2 Classic is an open-back over-ear but with planar magnetic drivers. The Beyerdynamic DT 1770 Pro is a closed-back model with dynamic drivers with a noticeably sibilant treble. The Etymotic HF5 is a closed-back in-ear with balanced armature drivers.

See our best in-ears and earbuds

For this test each headphone was placed on our dummy head (Head Acoustics HMS) inside an isolation box. For the duration of the test the isolation box was not opened and the headphones were not touched. The audio interface and pre-amp used for the test was the RME UFX, and the amp used for driving the headphones was the Schiit Ragnarok. The test pattern used was a 20-second full-spectrum sine sweep (10Hz-22KHz) followed by a 50-minute full-spectrum pink noise calibrated at 90dB SPL, followed by 10 minutes of silence for cooling down the drivers. This pattern was repeated for 120 hours using a digital audio workstation (DAW) bringing the actual period of noise played to 100 hours. At the same time, the response of the headphones under test was recorded using the same DAW (Reaper). The sine sweeps were used to analyze the performance of the headphones over the duration of the test. Additionally, two music clips were played and recorded through the headphones at 0 and 120 hours to be used for subjective evaluation.

The recorded measurement sweeps for hours 0, 20, 40, 60, 80, 100, and 120 were imported into Room EQ Wizard and were analyzed for frequency, phase, and harmonic distortion response. It should be noted that for the changes in the measurements to be considered as evidence for the burn-in effect, the changes have to be large enough to be audible and should show a cumulative pattern over time, that is, the changes should steadily increase over time in the same direction.

No significant change or observable pattern was found in the phase response of the four headphones tested. Again, the changes shown here are a lot smaller than the changes that happen between each re-seat of headphones on the head caused by the small changes in their position. The break-in phenomena reported by the users is usually quite significant, but none of the fluctuations measured here are significant. Additionally, the LCD2 showed almost no fluctuations in their phase response over time, which is another indicator for the stability of the test system. 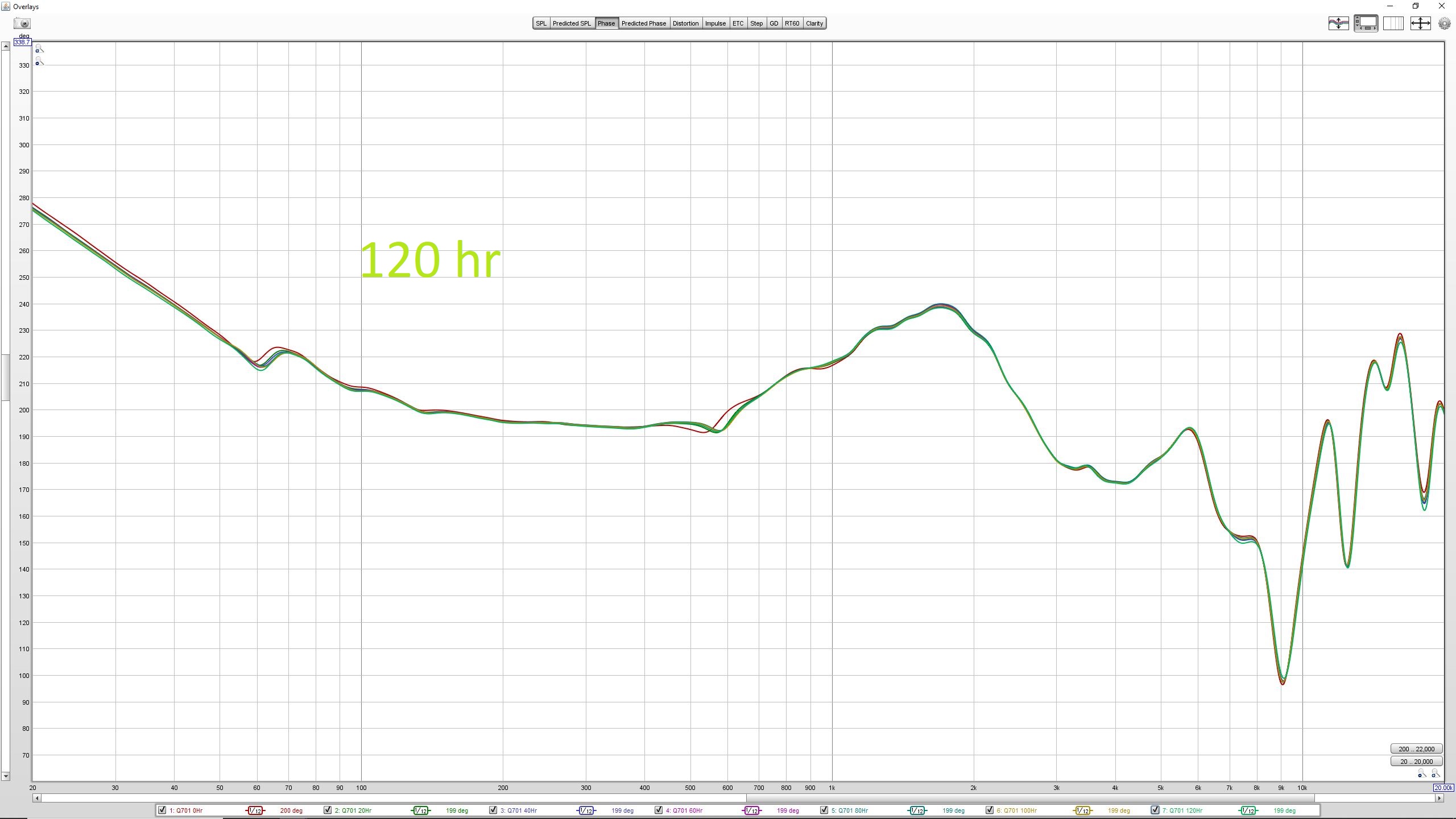 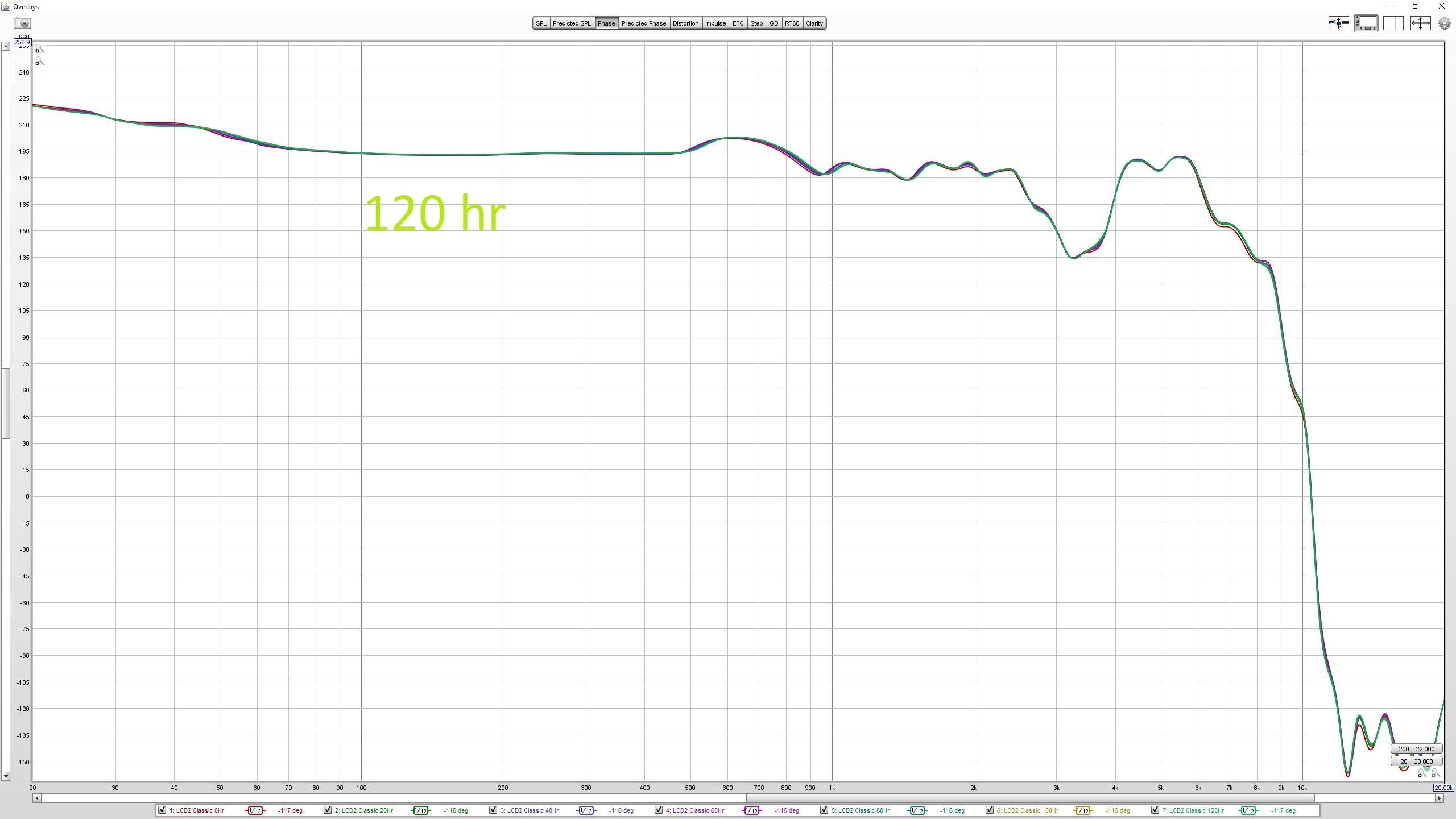 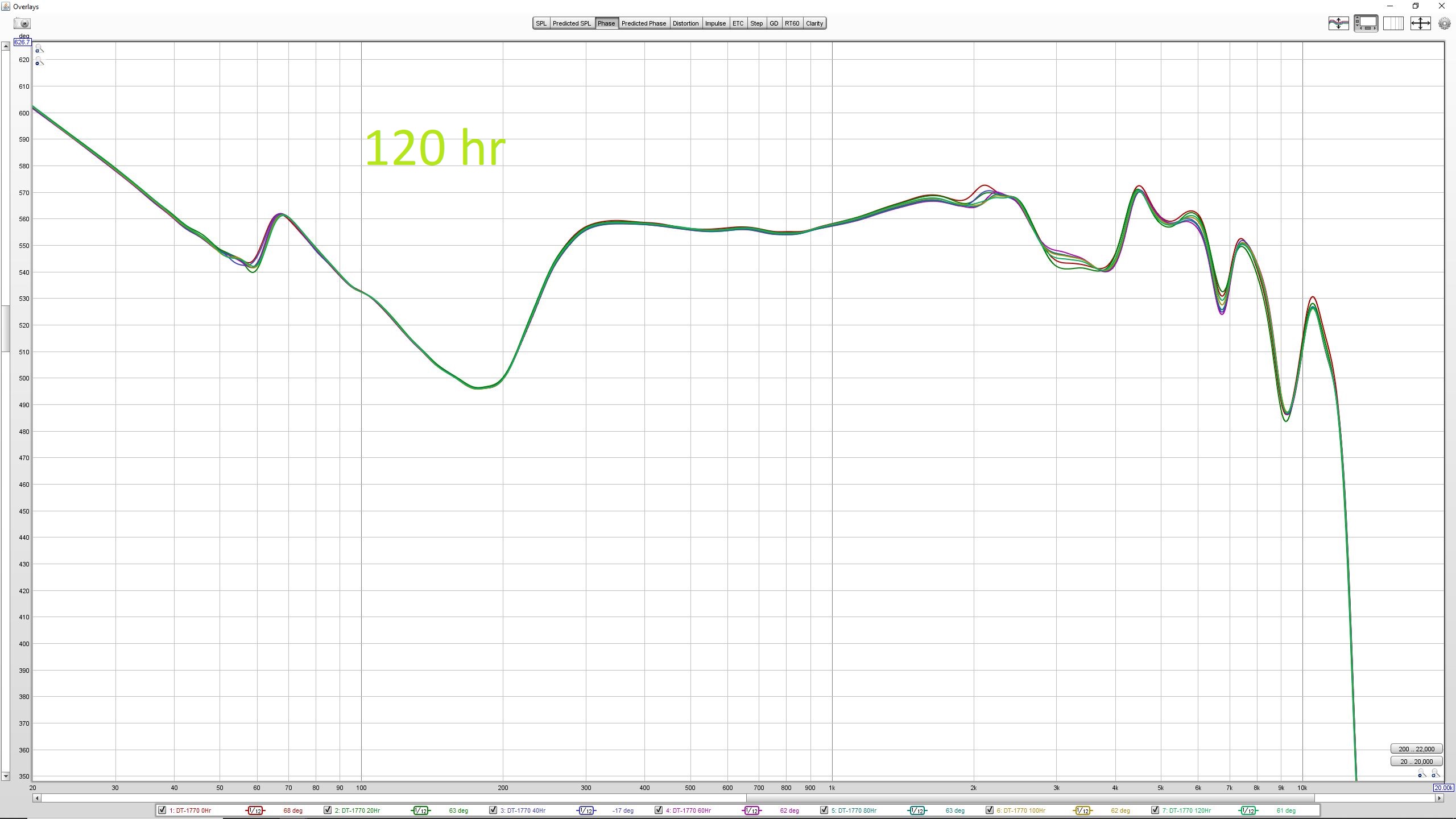 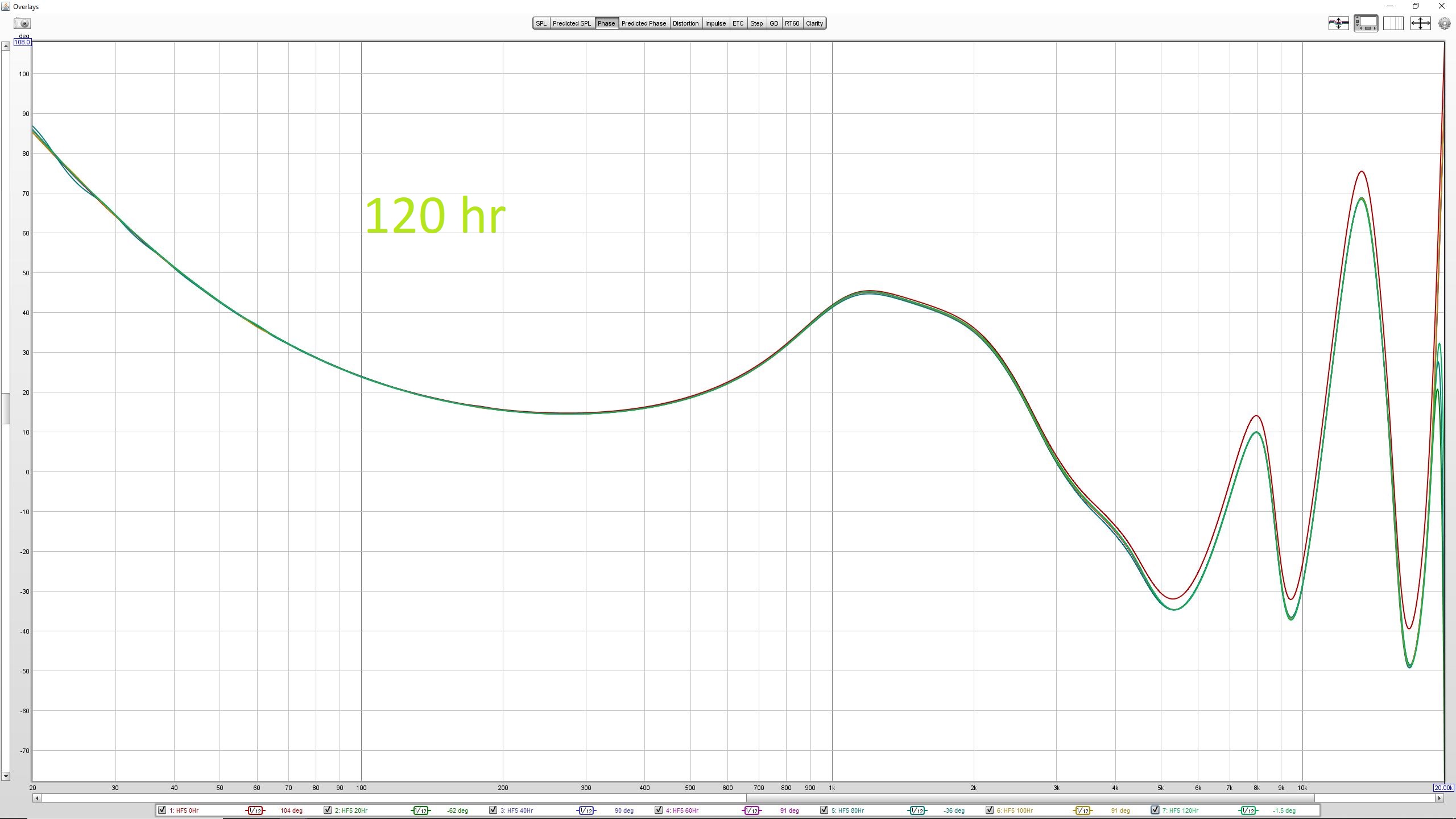 The harmonic distortion results showed the most fluctuation among the three tests analyzed here. This is most likely due to the THD test being the most sensitive to environmental noise and changes in system performance. However, no pattern was observed in the fluctuations and the majority of the fluctuations were less than 0.1% of the following measurements. The large changes in THD in the bass range is most likely due to environmental noise and room temperature and showed no observable pattern.

The unusual THD response of the Q701 at 100-hour is most likely due to environmental noise or system malfunction, since it was not present in the 120-hour measurement. Same is most likely true for the peak in THD of the DT 1770 at 120-hour. 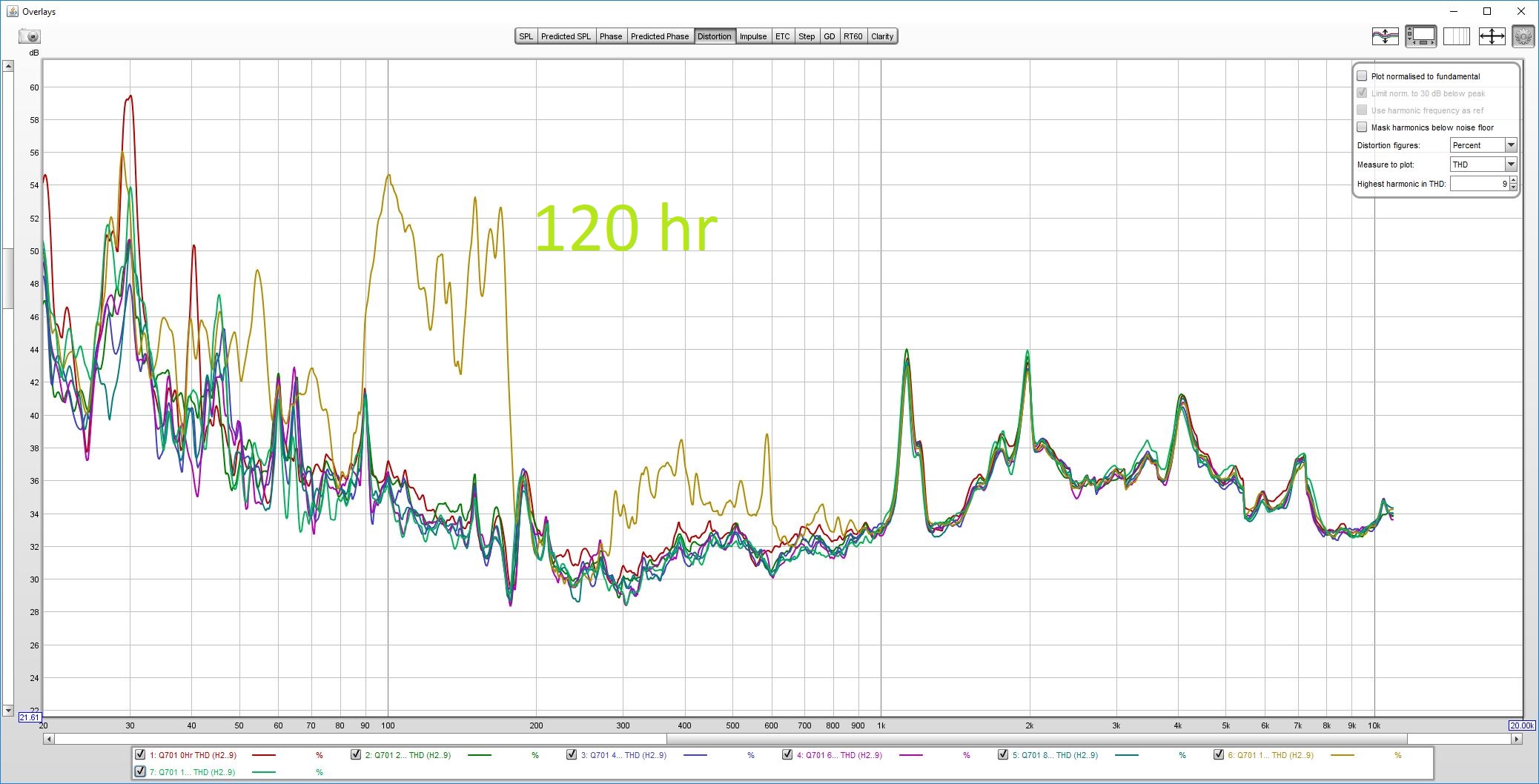 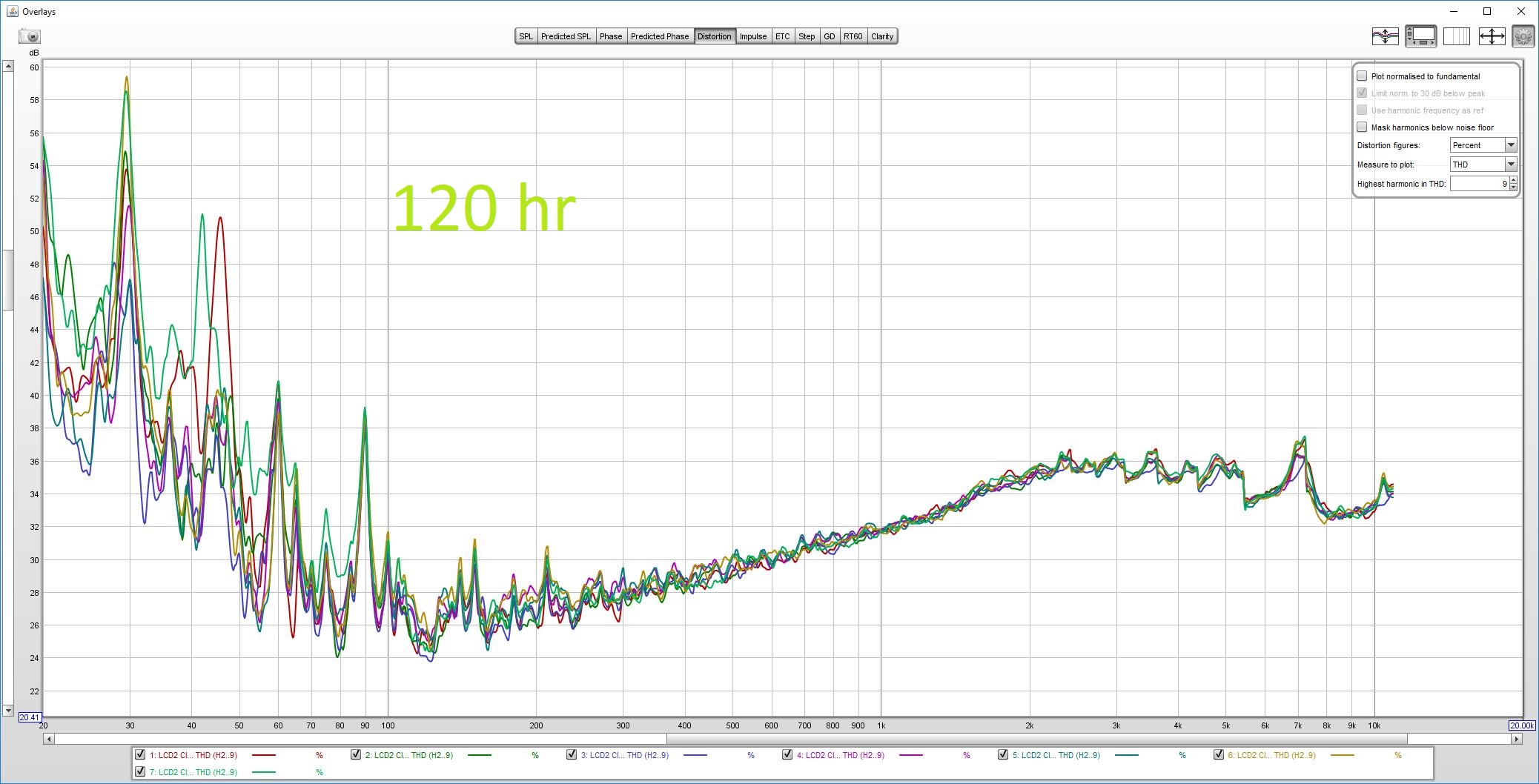 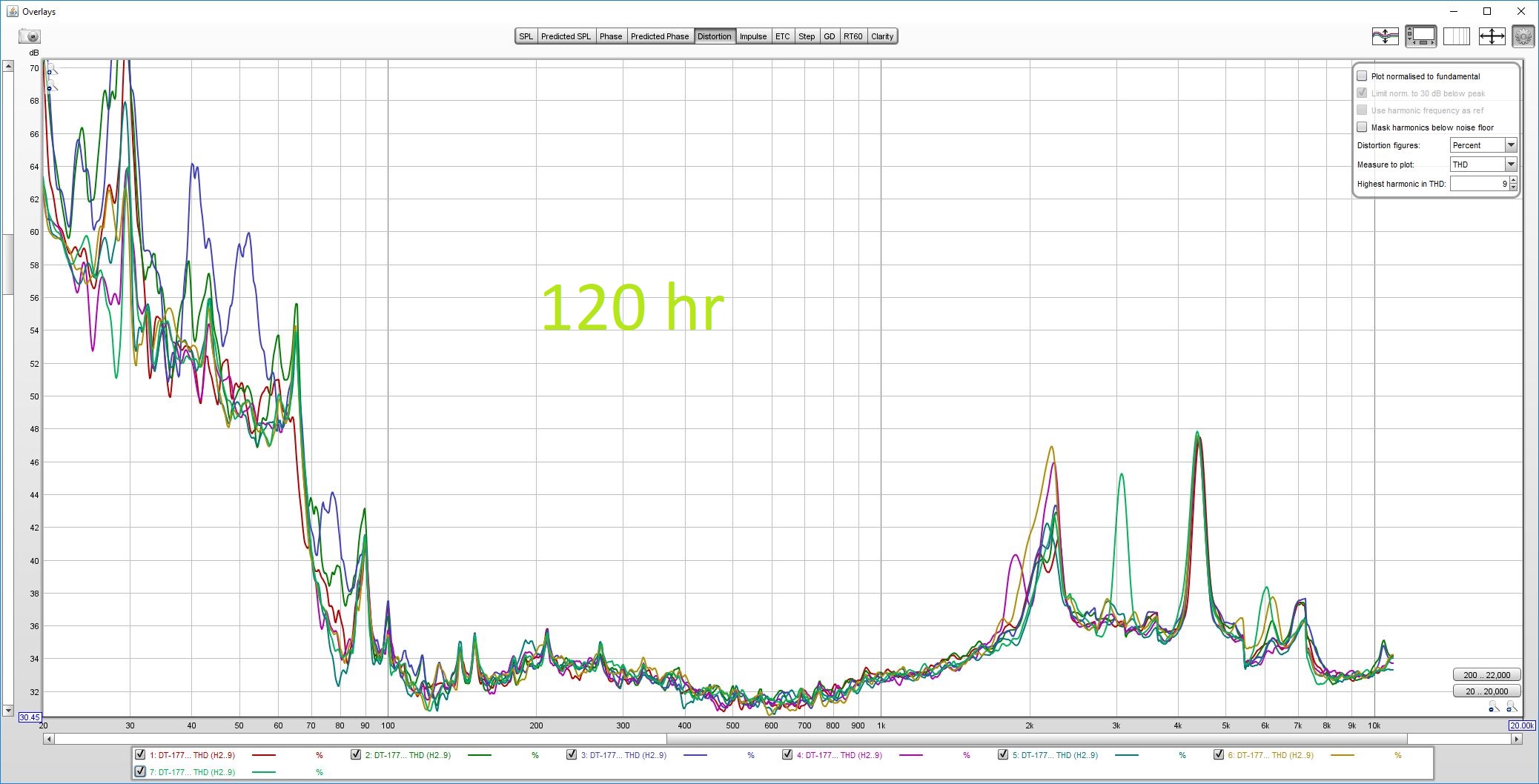 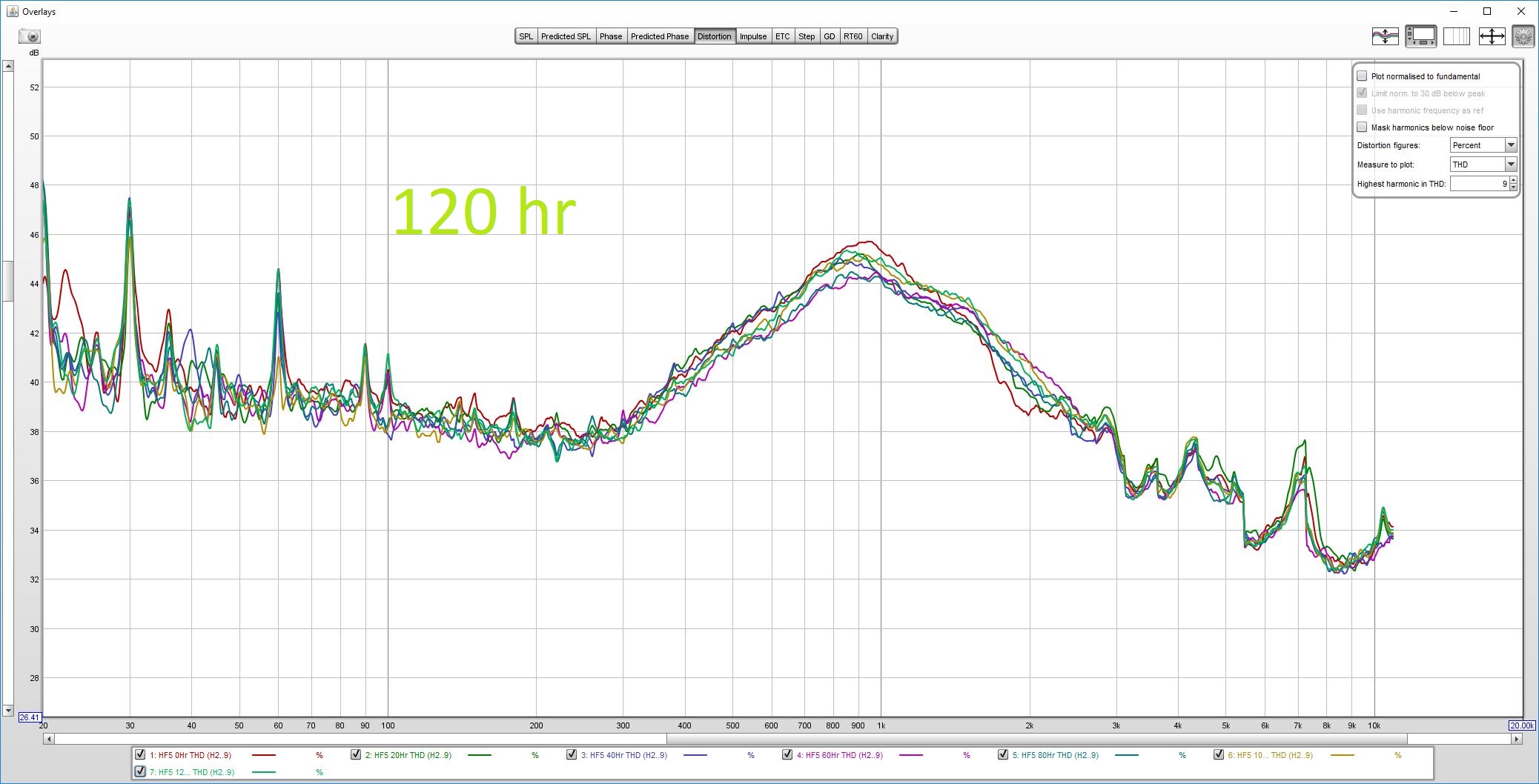 As mentioned, music clips were recorded through the headphones for subjective listening evaluation. Although the focus of this test was objective measurements, a subjective portion was included to monitor for changes that may be audible to human hearing but not captured by the measurements. Here, you can listen to the same music clip recorded through the headphones at 0 and 120 hours, and decide for yourself whether you can notice any difference in the sound (other than changes to the environmental noise).

No evidence in support of the existence of the break-in effect was found in this test. The changes observed were either too small to be audible, or very large and not repeatable, which suggests fluctuations in system performance or environmental noise. Also, no pattern was observed in any of the changes over time, ruling out a cumulative or long term effect due to burn-in. The music clips recorded as part of the test also sounded nearly identical in a subjective listening evaluation. It is therefore concluded that breaking-in headphones for consumers is not necessary, and won't result in any noticeable change in their sound. The user reports regarding the existence of the break-in phenomena can be explained as a psychoacoustic effect caused by the fact that human hearing is very good at adapting to new sounds. So, a pair of headphones that were perceived as harsh a few weeks ago are now being perceived as more tame and balanced. However, we are not able to make a conclusion on whether break-in has an effect during the manufacturing process or whether the headphones tested were broken-in during the manufacturing process, since the headphones tested were retail versions of the products.

Therefore, it is possible that there are headphones in the market that would require break-in but were not included in our test. It also possible that increasing the length of test by a few hundreds of hours, or testing headphones of others types (with electrostatic or hybrid drivers) would show evidence of burn-in. Additionally, we only compared the headphones in terms of frequency, phase, and harmonic distortion response. Other metrics such as inter-modulation distortion or non-coherent distortion may be able to show a pattern of change that could be considered as evidence for headphones break-in.