Dynamic vs Planar Magnetic Headphones
Which is best for you?

Headphones create sound by causing a thin and lightweight sheet of foil, "the diaphragm," within their driver to vibrate. This is done with the use of magnetic fields that move the diaphragm depending on the driver's design. Dynamic drivers are the most common configuration for both headphones and speakers. However, planar magnetic drivers are another popular configuration that offers a different and often better sound quality at the expense of energy consumption and size. Which is best for you will depend more on your listening preferences, habits, and how much you're willing to spend. What it is: Drivers that have a magnet that pulls on a coil attached to the diaphragm, similar to speaker cones.

Who should buy it: Casual and critical listeners. They're the most common type of drivers, found in both budget and high-end headphones. What it is: Drivers that have two magnets on either side of the diaphragm that make it vibrate.

Who should buy it: Critical listeners who want a slightly more immersive sound and don't mind having a bigger, heavier headphone. They're also a bit more expensive than dynamic ones.

We compare Dynamic and Planar magnetic headphones based on the design of the drivers, the differences they have in sound quality, as well as the level of leakage they generate. We have not reviewed any electrostatic and balanced armature headphones and cannot yet include these drivers in our comparison. 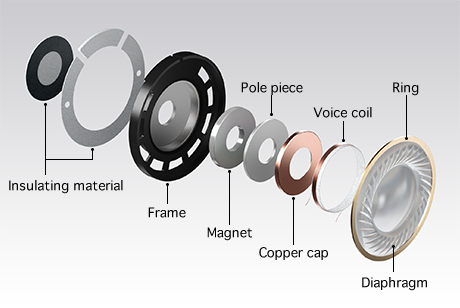 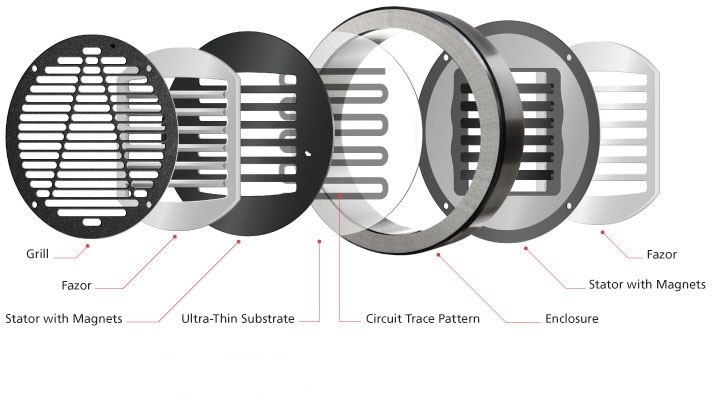 Dynamic drivers have the most simple configuration out of all the driver types. They use a small current from the audio source to generate a magnetic field in the voice coil (shown above). The coil, which is attached to the diaphragm, is then attracted to the permanent magnet when it's electrically charged. This causes the diaphragm to vibrate and emit sound waves in response to the electrical signals sent by your audio source.

Planar magnetic drivers have a similar principle to dynamic drivers. They also send electrical impulses to a conductive material "windings" that interacts with the magnetic fields within the driver. However, in this case, the windings are spread across the thin membrane of the diaphragm with two permanent magnets. This causes the diaphragm to vibrate in response to the electric signals sent by your audio source. Unfortunately, this also means the magnets have to be big enough to cover the surface area of the conductive material, which is why planar magnetic headphones are a little bigger and heavier than dynamic ones. They also consume a little more power. Bass response describes the deep and heavy tones in your music. It represents the low-end spectrum of frequency response and ranges from 20Hz to 250Hz. How the bass response behaves is largely dependent on the driver type and size.

Results: Planar magnetic drivers typically have a better bass response with more extension to the low-end frequencies. This means they have less roll-off than high-end open, dynamic headphones of the same caliber. Planar magnetic drivers also benefit from the thinner diaphragm, which gives them a tighter bass response that reacts faster to the changes in the input signal. This gives them a punchy bass that's not overpowering, and that doesn't over-extend into the mid-range.

Dynamic headphones come in more varied driver sizes and a wide spectrum of frequency responses. They're cheaper to manufacture as they are made in much larger quantities. This gives the listeners more options to find a bass profile to suit their preferences. However, for headphones of the same caliber, planar magnetic drivers usually produce a better bass.

Soundstage describes the perceived space and environment of sound, as created by the headphones acoustics.

Results: Typical planar magnetic drivers have slightly better soundstage. The drivers are usually larger, and the entire diaphragm moves to create a planar sound wavefront instead of the focused spherical wavefront that's common for dynamic drivers. Soundstage is heavily dependent on the way sound interacts with the ear, and a focused wavefront slightly alters the way we localize sound as it enters the ear canal.

A broader wavefront gives a better representation of the stereo image, as it feels less like it's coming directly from a point source on your head and more like a wave of sound from your environment. It's a noticeable effect, but it may not be as significant, as newer closed-back planar magnetic headphones like the Oppo PM-3 also have relatively spherical divers with a focused sound wavefront. On the other hand, high-end dynamic drivers like those in the Sennheiser HD 800 S model are large enough and designed not to experience this issue.

Imaging describes the accurate reproduction of location, stereo balance, and transparency of instruments, as intended by the audio source.

Results: Dynamic drivers typically reproduce a better stereo image. Planar magnetic drivers are more difficult to manufacture and harder to match. This causes slight errors in the phase response and also small shifts in the stereo image, which somewhat changes the audio reproduction, although the effect is not very noticeable.

Planar Magnetic headphones also have more variance from unit to unit because of the complex driver design. This means your headphones will differ slightly in their audio reproduction compared to another headphone of the same model. Distortion is the level of fidelity to the input source that the headphones are able to reproduce at higher volumes. This can add unwanted artifacts that slightly alter the frequency response of the audio.

Results: Dynamic drivers, in theory, have worse distortion than planar magnetic ones. This is due to the diaphragm only vibrating by the part attached to the voice coil, which slightly distorts its shape, especially at higher volumes. This translates into small distortions that lessen the quality of the audio reproduction, particularly with cheaper quality drivers.

On the other hand, since the magnets and the conductive material of planar magnetic drivers cover a larger surface area, almost the entire diaphragm vibrates in response to an input signal. Hence they are less likely to change the intended sound, even at higher volumes. However, based strictly on our results, the distortion values of planar headphones fluctuate a lot more. Although, overall, they're generally low. Leakage is the sound that escapes the ear cups or earbuds. Therefore, very leaky headphones require an isolated environment to not disturb the people around you. However, leakage can sometimes be beneficial, as it helps create a more immersive listening experience.

Results: Due to the bi-directional movement of the diaphragm in planar magnetic headphones and the lack of any damping material on the back of their drivers, they tend to leak a bit more than regular open-back dynamic models. The sound is not only being pushed towards your ear canal, similar to dynamic drivers, but because there are two opposing magnetic fields, they also push a lot of sounds outwards as leakage.

This is not as big of an issue in the closed-back variation of planar magnetic headphones, as they try to limit leakage by design. However, from our test results, we've noticed considerably more leakage from planar magnetic models, especially in the higher frequencies, than dynamic headphones of the same caliber.