Our Recording Quality Score and Tests

By Sam Vafaei
What it is: Microphone recording quality shows how natural, neutral, extended, and understandable speech would be with the device under test, in a quiet environment.
When it matters: A microphone with a good recording quality ensures that the person listening to you would hear a full, clear, and easily understandable speech. Therefore, it's important whenever a good quality of speech transmission and intelligibility is needed.
Score components:
Score distribution

Microphone recording quality is concerned with the performance of the microphones and the quality of speech when used in an ideal (quiet) environment. It shows how natural, neutral, extended, and intelligible speech would be as heard by the listener.

It is part of our series of tests of the microphone of headphones.

A microphone with a good recording quality ensures that the person listening to you hears a full, clear, and easily understandable speech. Therefore, it is important whenever a good quality of speech transmission is needed. It is worth noting again that recording quality doesn't take into account the noise handling capability of the microphones, and the results are only valid in a quiet environment. For noise, we test this separately here.

Our microphone tests are performed in a 6' x 3' x 3' isolation box, which is partially treated with bass traps and absorbers. The HMS (Head Measurement System) is positioned at one end of the box. The HMS has a speaker within itself to replicate someone talking. During this test, the recorded speech file plays through this speaker and out of the HMS' mouth, which the headphones' microphone can then pick up. You can hear this file in the following section below.

Keep in mind that although there's another speaker placed in the box opposite our HMS head, it isn't used for this test. Instead, when testing microphone performance, it's used to simulate background noise for our Noise Handling test. 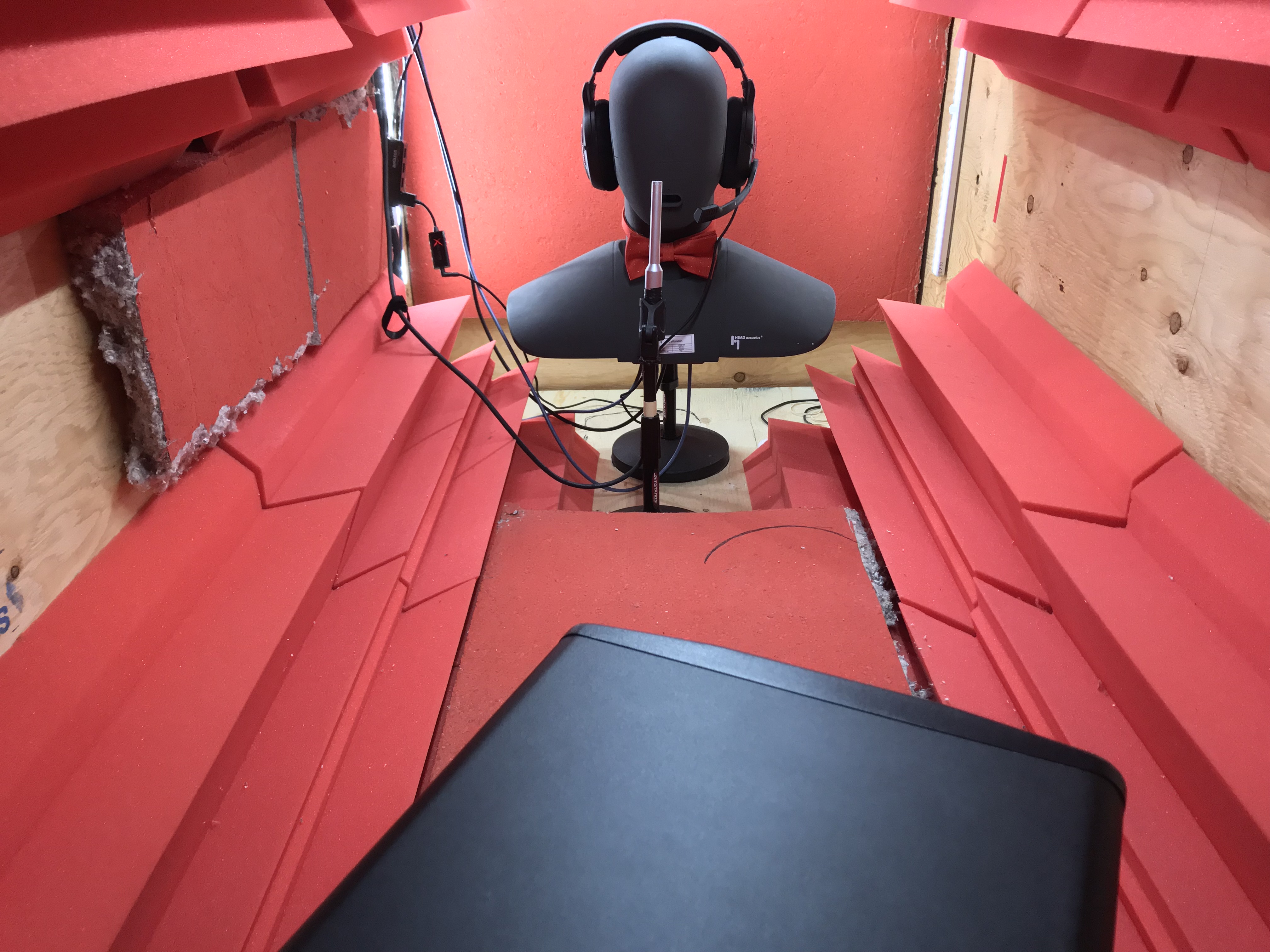 The target for our recording quality test is the response of a measurement microphone placed 5cm away from our dummy head’s mouth calibrated to 94dB SPL, and based on that, we calculate low-frequency extension, frequency response, high-frequency extension, harmonic distortion, and gain.

The signal for the LFE, FR, HFE, and gain tests is a pink noise (random noise with equal energy per octave) limited between 20Hz - 20KHz. The reason for using a pink noise instead of a swept sine is to circumvent the effects of the automatic gain control (AGC) algorithm that most the active/Bluetooth headphones use. For the Weighted THD test, a swept sine is used since it is better at catching the distortion artifacts produced by the AGC algorithm, compared to a pink noise.

What it is: An actual audio recording of the headphone's microphone, recorded while placed on the dummy head, with speech being played back through the dummy head's mouth simulator.
When it matters: When a clean, full, and understandable speech transmission is required.

What it is: Low-frequency extension shows how deep the bass response of the microphone is, and therefore, how deep and full your voice would sound to the listener. It's the lowest frequency at which the frequency response reaches -3dB of the target response.
When it matters: LFE isn't a big factor in speech intelligibility and even speech recorded with a mic that has an LFE of 500Hz could still be easily understood. Therefore, it's mostly important if you're concerned about how deep and full your voice would be heard.
Good value: <150Hz
Noticeable difference: 30Hz
Score distribution

LFE is the lowest frequency at which the microphone response reaches -3dB of our target response. It can be considered as a metric for how deep and full the voice recording will be with the microphone. The lower the LFE the better, however, values below 150Hz should be considered good. It should also be noted that LFE has very little effect on the intelligibility of speech and even a microphone with an LFE of 500Hz could still be very well understood (even though it will sound very thin).

A number of factors, such as the microphone's polar pattern and proximity to the source, affect the low-frequency extension of microphones. However, as a rule of thumb, the closer the microphone to the mouth (as is the case with boom mics) the better the LFE tends to be. What it is: Frequency Response Standard Deviation shows how accurately and balanced sound is captured by the microphone at each frequency. FR Std. Dev. is calculated between LFE and HFE, and the rest of the spectrum is ignored.
When it matters: A good frequency response is desired when a natural and neutral speech quality is desired. Opposed to HFE, which is more a metric for speech intelligibility, frequency response can be considered as a metric for a natural and neutral sound.
Good value: >3.5dB
Noticeable difference: 0.5dB
Score distribution Frequency response is calculated between LFE and HFE, ignoring the rest of the spectrum. It is scored by calculating the amount of deviation between the microphone's response and our target response. FR Std. Dev. can be considered as a metric for the neutrality and spectral balanced of the recorded speech. The effects of FR on speech intelligibility is more than HFE, but less consequential than LFE.

What it is: High-frequency extension is the last frequency at which the frequency response reaches -3dB of the target response and where the following five frequencies are lower in amplitude than the obtained HFE. It shows how extended the treble response of the microphone is or, in other words, the highest frequency the microphone can understand at a reasonable volume when talking in the microphone, for example.
When it matters: HFE is one of the most important factors in speech understandability. The higher the HFE, the brighter, more open, and more extended the speech quality will be which makes it a lot easier to understand by the listener.
Good value: >8KHz
Noticeable difference: 1KHz
Score distribution

HFE is the highest frequency at which the microphone response reaches -3dB of our target response. It can be considered as a metric for clarity, presence, and intelligibility of speech, since the frequency range of 1kHz-8KHz has the most effect on speech comprehensibility. The higher the HFE the better, however, values above 8KHz should be considered good. Compared to the other tests present in the recording quality section at the moment, HFE has the highest correlation with speech quality and intelligibility.

A number of factors, such as the microphone's polar pattern and proximity to the source, as well as the connection protocol, affect the HFE performance of the microphone. Generally, wired headphones or wireless headset with their own proprietary protocol tend to do better at HFE, compared to Bluetooth devices. This is due to the fact that Bluetooth Hands-Free Profile (HFP) supports audio only up to 4kHz, as opposed to the other protocols that can go as high as 20kHz. What it is: The unwanted frequencies (harmonics) produced alongside the intended frequencies, which cause the deformation of an output signal compared to its input.
When it matters: When clean and pure sound reproduction is desired, though its effect is not as noticeable as frequency response.
Good value: <1.5
Noticeable difference: 1.0
Score distribution

Harmonic distortion for microphones is captured using a swept sine, as opposed to a pink noise used for the other tests. A swept sine signal can expose the artifacts caused by the automatic gain control (AGC) of the headphones better. The final value is calculated using a weighted filter that gives more importance to high-frequency distortion since humans are more sensitive to harmonic distortion at higher frequencies. However, it should be noted that THD (total harmonic distortion), compared to LFE, FR, and HFE, doesn't have a high correlation with perceived recording quality, even after applying a weighting filter.

What it is: Shows how much louder the microphone can go above our reference loudness level. The gain value is reported relative to our reference level, which is 94dB at a distance of 5cm from the mouth.
When it matters: A microphone with a high gain is important when the input signal (speech) is very quiet. For example, when whispering or talking on the phone in a library.
Good value: >18dB
Noticeable difference: 3dB
Score distribution

Our target SPL (sound pressure level) for our microphone tests is 94dB SPL. However, the gain on all microphones can be adjusted either on the headphone or on the device they are connected to. The gain value is acquired by setting the input level of the microphone to the maximum and recording the level. It is reported relative to the 94dB reference, therefore a gain of 10dB means that at the highest setting, the recorded SPL was 104dB SPL. As a rule of thumb, Bluetooth headphones tend to get the highest gain value because of their dedicated internal microphone amplifier.

What is not included

A few elements that you could care about are not included in the score at the moment:

If you feel there is an item missing that should be included, please let us know in the Q&A section.