By Sam Vafaei, Marc Henney
What it is: Soundstage qualities are not inherent to the audio content, the headphones have to 'create' them rather than 'reproduce' them. They determine whether the sound is perceived to be coming from inside or in front of the head, how open and spacious the soundstage is, how much the headphones acoustically interact with the environment, and how strong the phantom center is.
When it matters: When an accurately produced, large, and spacious soundstage, similar to that of a stereo loudspeaker setup, is desired.
Score components:
Score distribution

Soundstage determines the space and environment of sound, as created by the headphones. That is, it determines the perceived location and size of the sound field itself, whereas imaging determines the location and size of the objects within the sound field. In other words, soundstage is the localization and spatial cues not inherent to the audio content (music), and headphones have to 'create' them rather than 'reproduce' them. This differs from imaging, which is the localization and spatial cues inherent to the audio content.

A large, out-of-head, and in-front soundstage is mostly important to critical listening, home theater, and gaming use cases. A headphone with a good soundstage gives the sense that the music is happening in front of you, in a room you are sitting in, and not in a vacuum in your head. Creating a good soundstage is one of the hardest things to do for a headphone, and almost no headphone currently available can mimic a speaker-like soundstage.

Unless a large and speaker-like soundstage is needed or highly desired, most users will be perfectly happy with a headphone with a non-existent soundstage. It is possible that some people won't even notice the lack of it, or not be bothered by a small and inside-the-head soundstage until they compare it with a good stereo loudspeaker setup or a pair of headphones with a good soundstage.

Our reference for the ideal headphone's soundstage is the ideal stereo loudspeaker setup, in the ideal room. Although no such ideal setup exists in the real world, this provides a good theoretical basis for determining the components of the soundstage. Based on this framework, the differences between loudspeakers and headphones in terms of localization and spatial qualities, i.e. soundstage, can be divided into three: 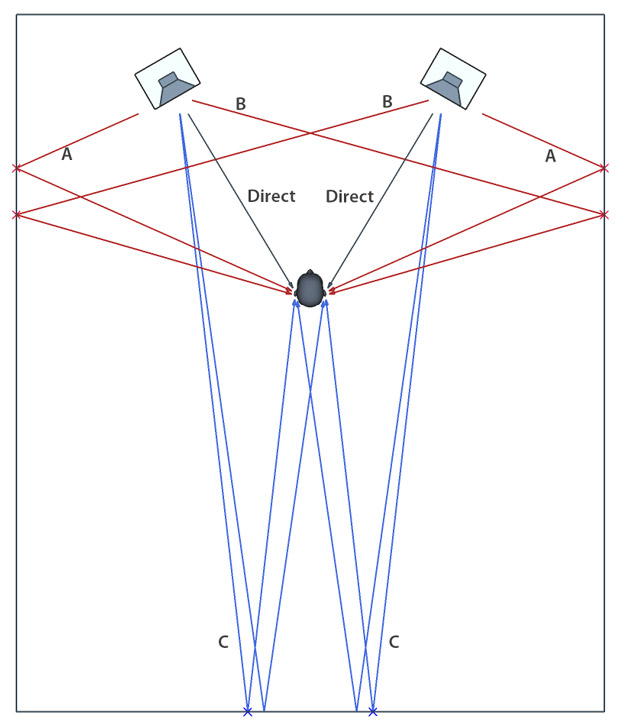 Distance and Angle of the Source
(source: audiodesignlabs.com) 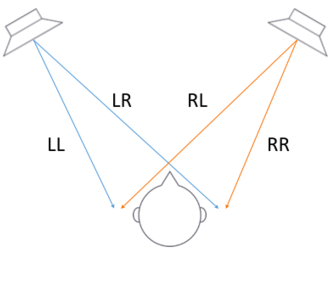 In order to measure the amount of interaction between the pinna and headphones, a test was devised that we call PRTF, short for pinna-related transfer function. For this test, we got an extra ear for our dummy head, chopped its pinna off, and measured the frequency response of each headphone twice. Once with the intact ear, and once with the ear with the missing pinna. The difference between the two frequency responses is the PRTF of the headphone.

To come up with a reference to score our PRTF measurements against, a loudspeaker was used. It was positioned 1 meter in front of the HMS (our dummy head) and frequency response measurements were performed with and without pinna every 30 degrees. We picked the loudspeaker PRTF at 30 degrees as the reference, because that’s where loudspeakers are positioned in a stereo setup, but as the graph below shows, there's a clear pattern emerging as the head is rotated. 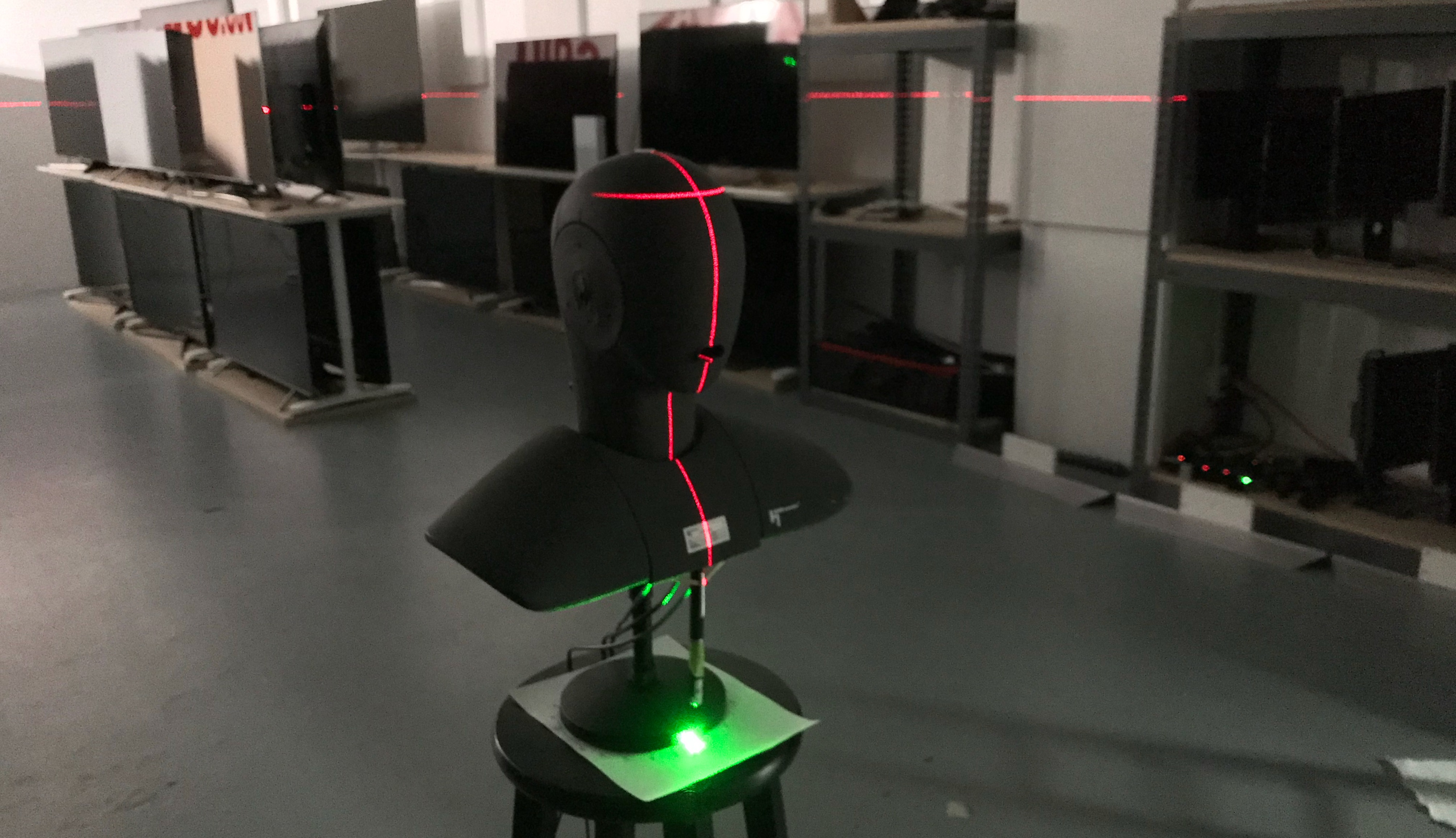 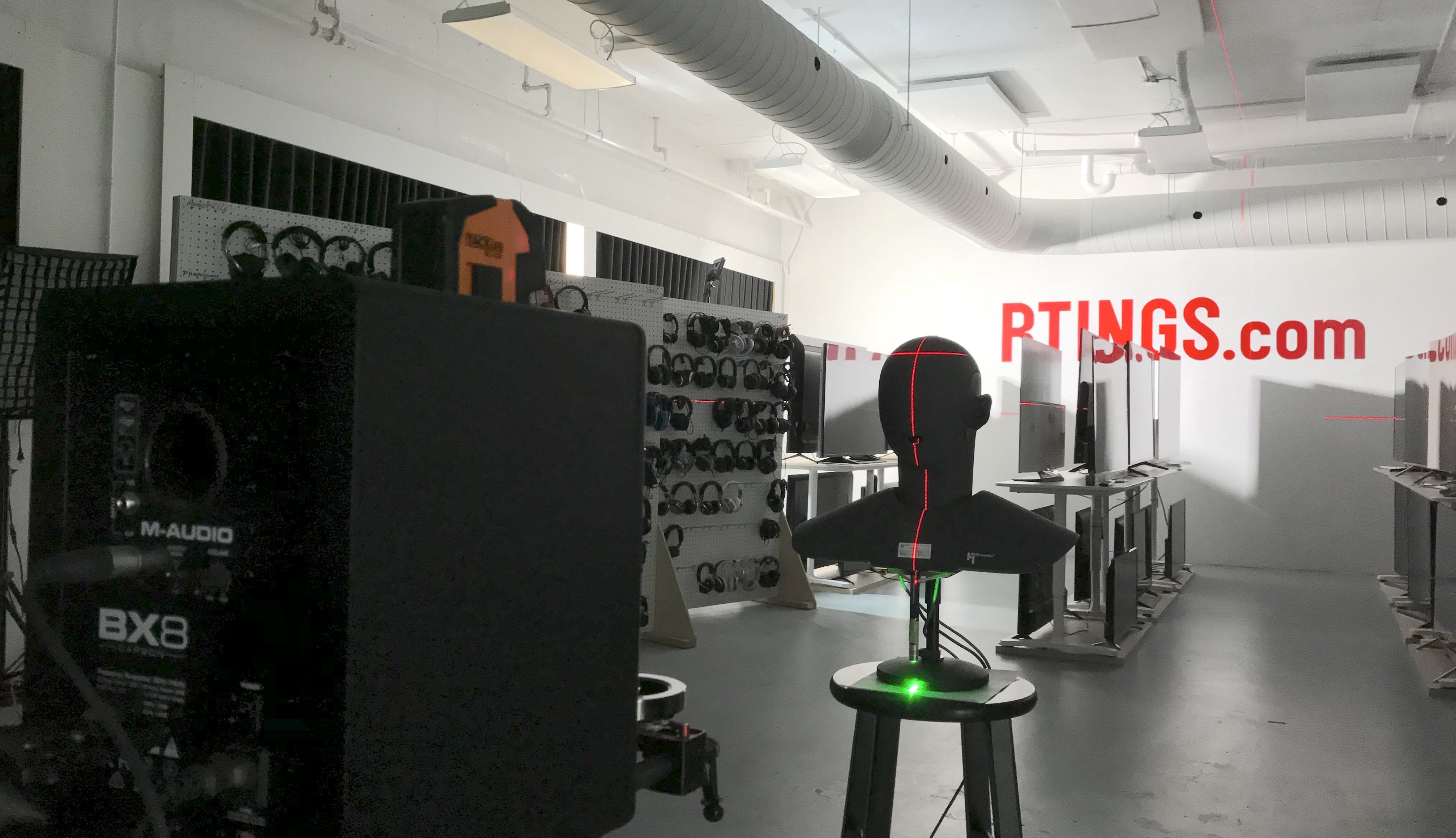 In the soundstage category in our reviews, PRTF calculations are divided into three: Accuracy, Size, and Distance.

What it is: The standard deviation of the PRTF (pinna-related transfer function) of the headphones compared to a reference loudspeaker's PRTF at 30°. This quality is monaural and can be perceived even with one ear. This test doesn't apply to in-ears and earbuds, due to the lack of pinna interaction.
When it matters: An accurate pinna activation is mainly responsible for how natural and speaker-like the soundstage is perceived to be. The less error in the shape of the PRTF, the more natural and speaker-like the perception of the soundstage will be. High amounts of error may indicate a soundstage that's unnatural or odd.
Good value: <2.5
Noticeable difference: 0.1
Score distribution

The accuracy value is derived by performing a standard deviation calculation of the PRTF response compared to the speaker reference PRTF, between 2kHz and 7kHz. In other words, it shows how accurate the shape of the response is in that region, compared to the reference PRTF response, and therefore, is mostly responsible for how natural the perception of soundstage will be.

As a rule of thumb, headphones with angled drivers and large and deep enclosures have the best PRTF responses. That's why over-ear headphones tend to do better than on-ears, earbuds, and in-ears in this test. Also, some headphones show unusual peaks and dips in their PRTF responses. One possibility is that these headphones have small ear cups, and they pinch or mangle the pinna in a way that creates an unusual response and the soundstage of these headphones may be perceived as odd and unnatural. 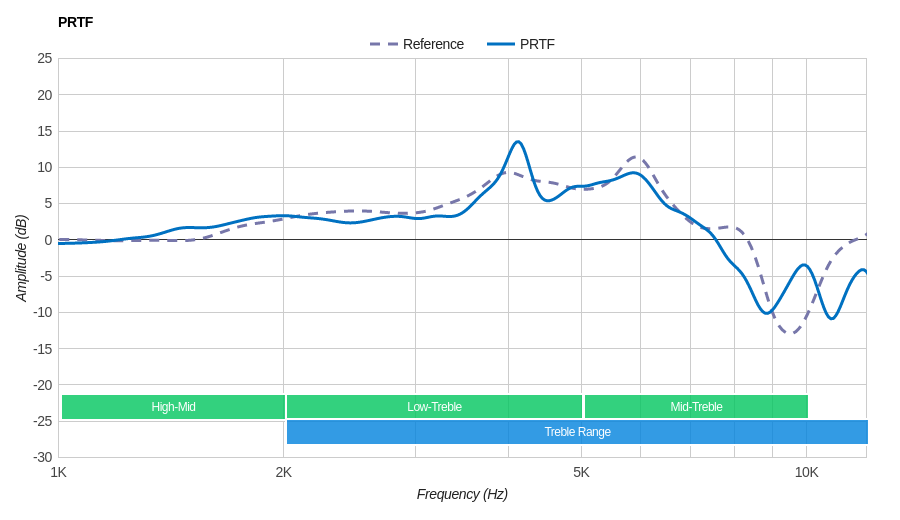 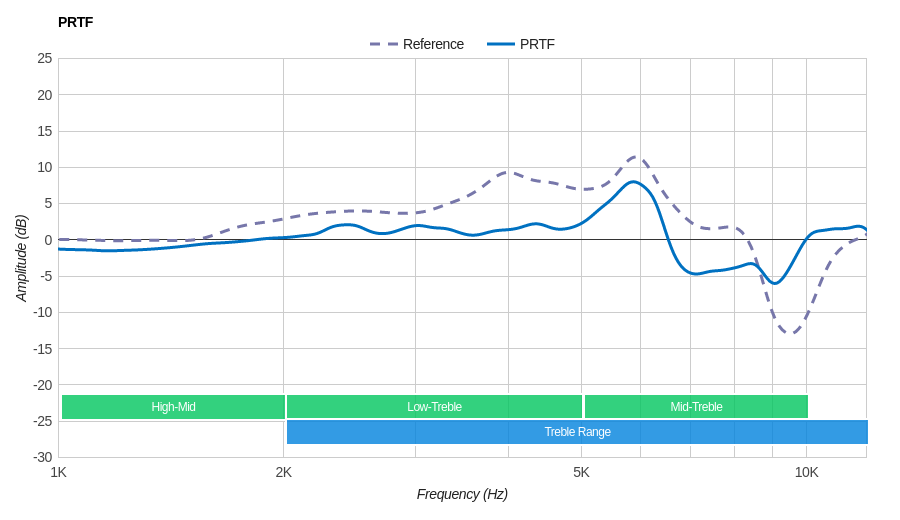 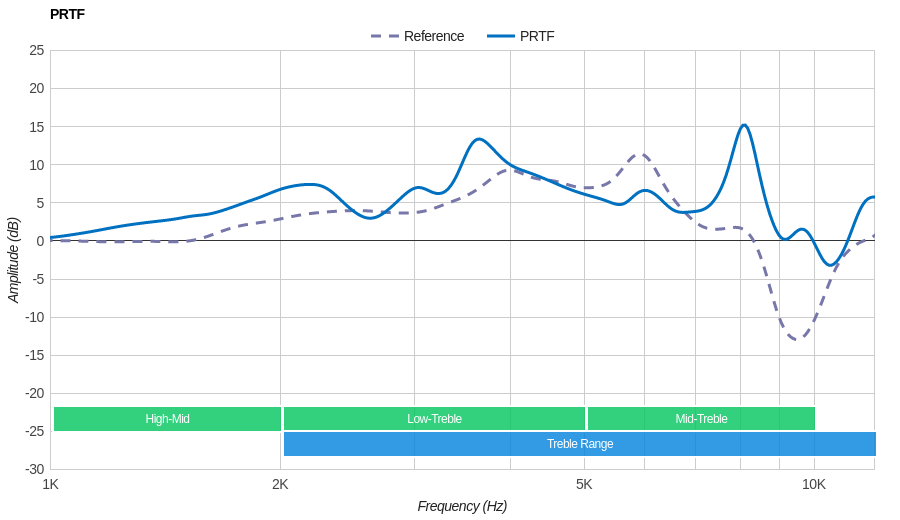 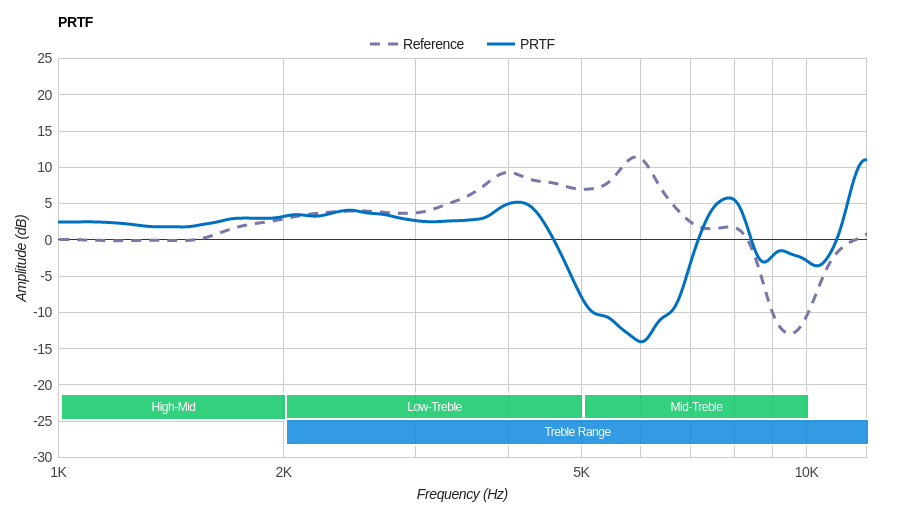 What it is: The average amplitude of the PRTF (pinna-related transfer function) of the headphones compared to that of a reference loudspeaker's PRTF at 30°. This quality is monaural and can be perceived even with one ear. This test doesn't apply to in-ears and earbuds, due to the lack of pinna interaction.
When it matters: This value is responsible for the perceived size of the soundstage. The higher the value, the larger the perceived size of the soundstage. However, values above the reference (5.0dB) could result in a soundstage that's perceived as unnatural or odd.
Good value: >3.7
Noticeable difference: 0.1
Score distribution

The size value is derived by performing an average amplitude calculation on the PRTF response between 2kHz and 7kHz. In other words, it shows the amount of interaction between the headphone and the pinna, regardless of its accuracy, and therefore, is mostly responsible for how large the soundstage will be perceived.

As a rule of thumb, headphones with angled drivers and large and deep enclosures have the best PRTF responses. That's why over-ear headphones tend to do better than on-ears, earbuds, and in-ears in this test. Also, some headphones show an unusually high amount of pinna interaction in their PRTF responses. One possibility is that these headphones use the pinna to dampen the resonances of the enclosure, and when the pinna is removed for the PRTF test, those resonances are able to ring freely. In this case, the extra activation can be considered as noise in our measurements. 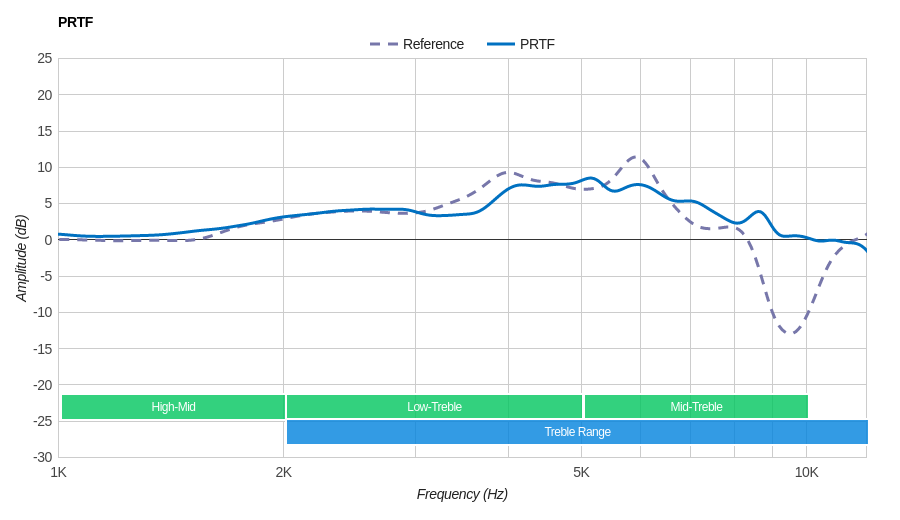 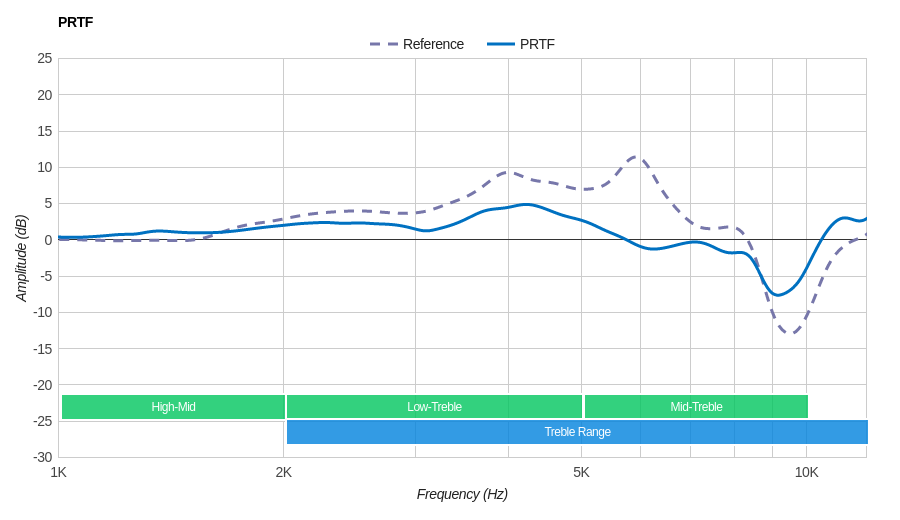 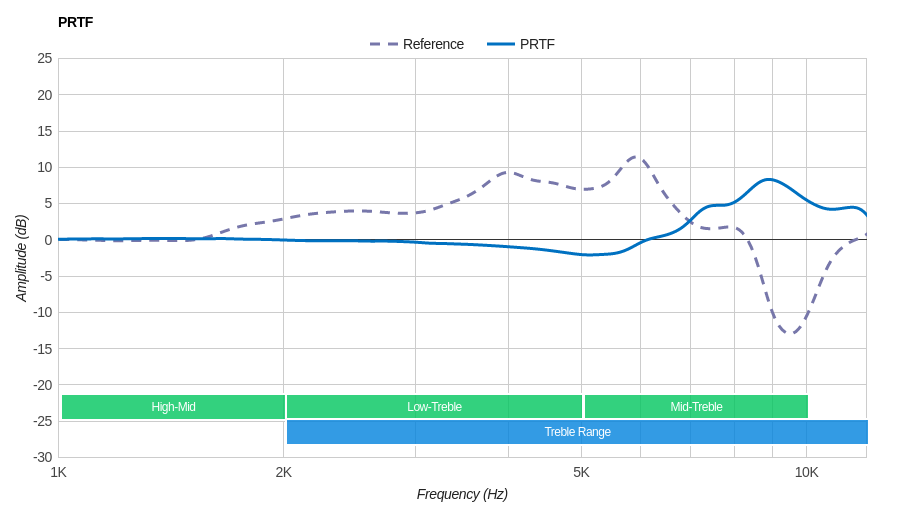 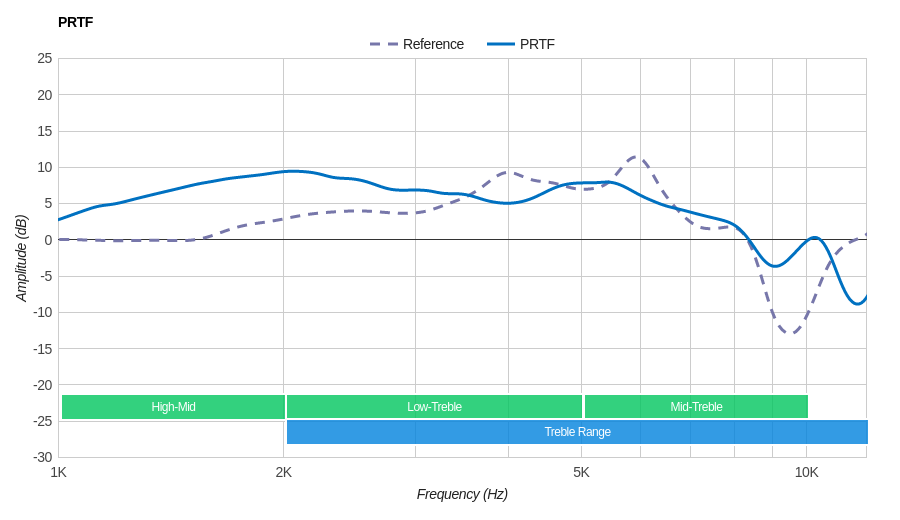 What it is: The depth of the "10kHz notch" of the headphone's PRTF, which is caused by phase cancellations at the concha. This quality is monaural and can be perceived even with one ear. This test does not apply to in-ears and earbuds, due to the lack of pinna interaction.
When it matters: This value is mainly responsible for the perceived distance and elevation of the soundstage. A small distance value may result in a soundstage that is perceived to be located inside the head. Larger values may help pull the soundstage out from inside of the head and bring it to the front.
Good value: >13
Noticeable difference: 1
Score distribution

The distance value is derived by calculating the difference between the "average PRTF amplitude of the 2kHz-7kHz range" (i.e. PRTF Size), and the "lowest PRTF amplitude value in the 8kHz-12kHz range". In other words, PRTF distance looks for the depth of the 10kHz notch, which is mostly responsible for cues regarding the angle and elevation of the sound source.

As a rule of thumb, headphones with angled drivers and large and deep enclosures have the best PRTF responses. That's why over-ear headphones tend to do better than on-ears, earbuds, and in-ears in this test. 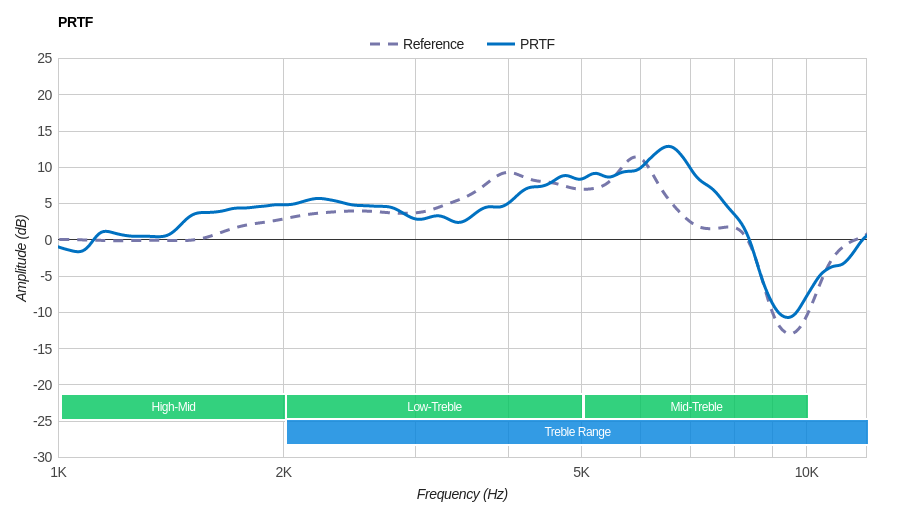 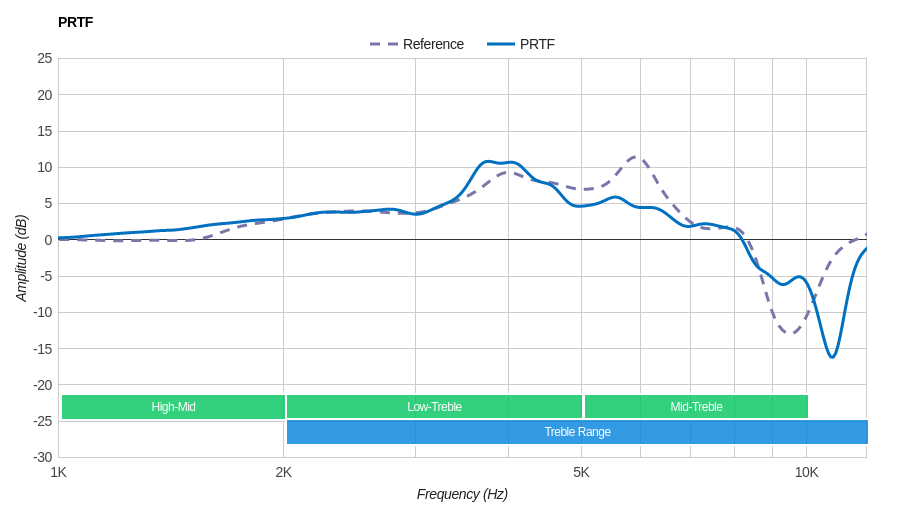 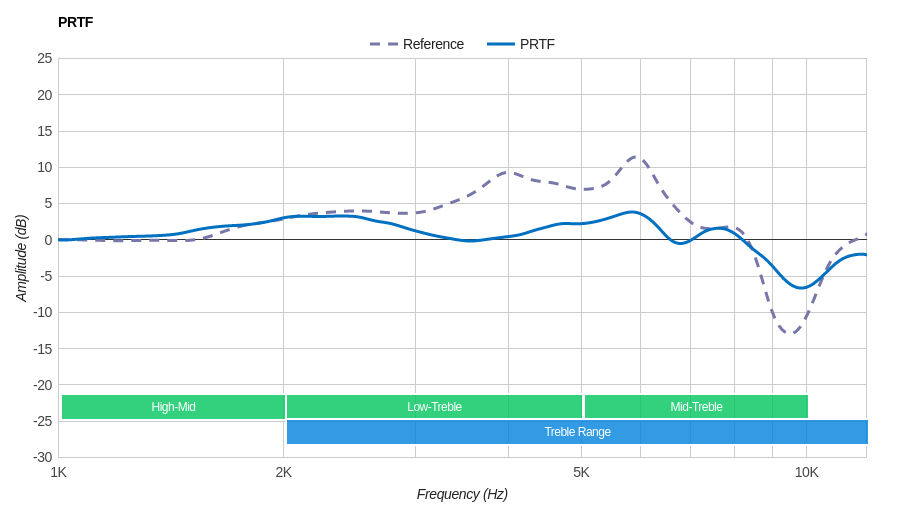 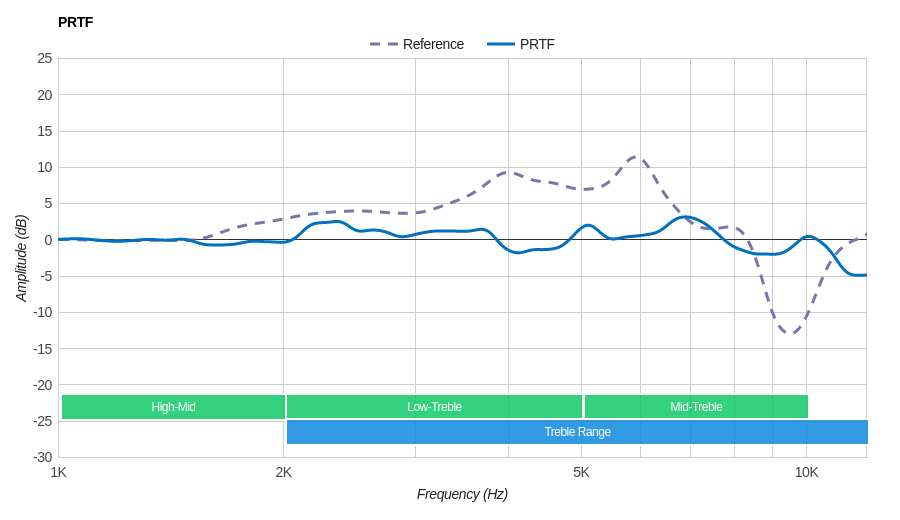 It should be noted that with some headphones, the center frequency of the "10kHz notch" is slightly shifted upwards or downwards. Based on our tests, an upshift in the center frequency of the notch could actually represent cues for the elevation of the sound source. That is, the auditory system will localize the sound source in-front and slightly above, rather than just in front.

What it is: How open the headphones are, and how open and spacious they sound. This quality is monaural and can be perceived even with one ear. This test differentiates between acoustically and electronically produced crosstalk and only takes the acoustically generated crosstalk into account. This value is the inverse of the Noise Isolation test score and could be indirectly related to the acoustic impedance of the headphones.
When it matters: When a headphone with a sense of an open and spacious soundstage is desired. A value of 10 indicates a fully open headphone, and a value of 0 indicates a fully closed headphone.
Good value: >7.5
Noticeable difference: 0.5
Score distribution 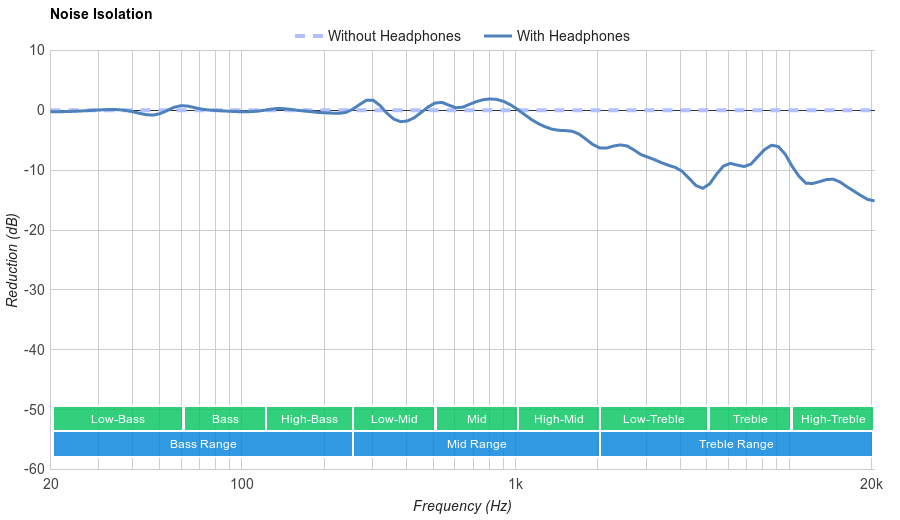 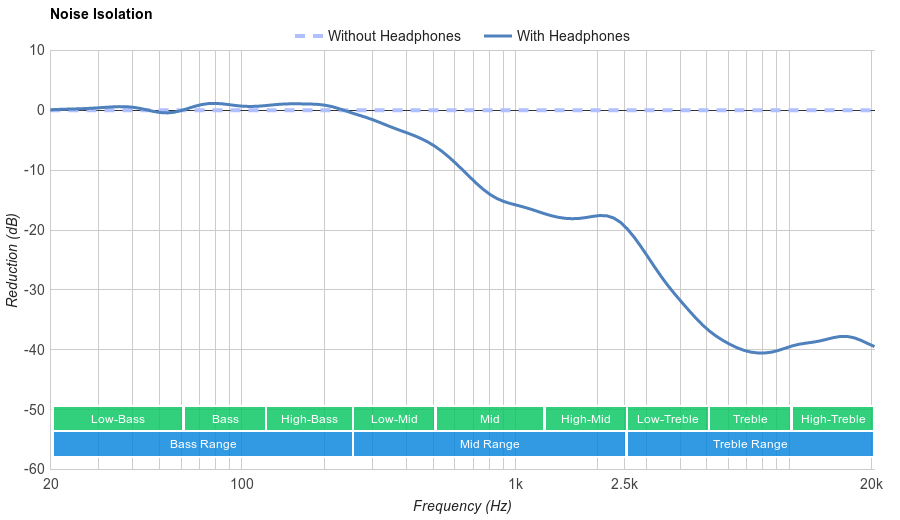 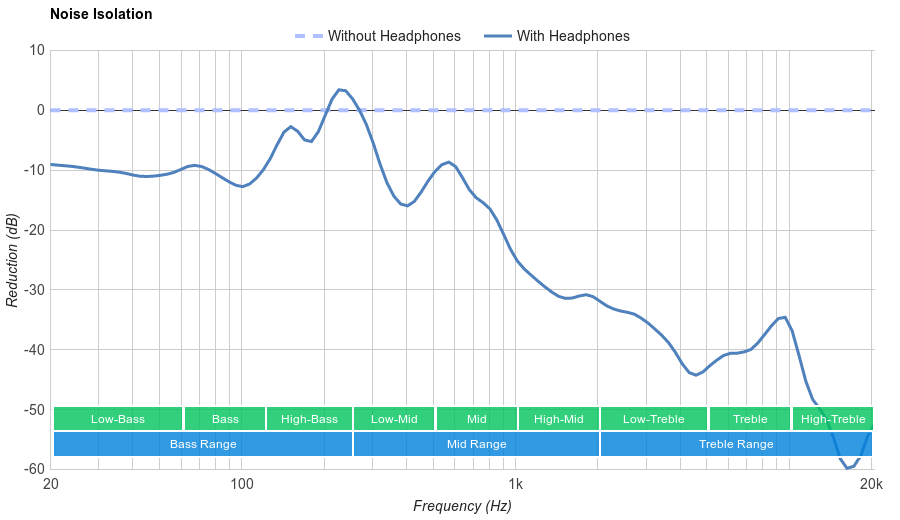 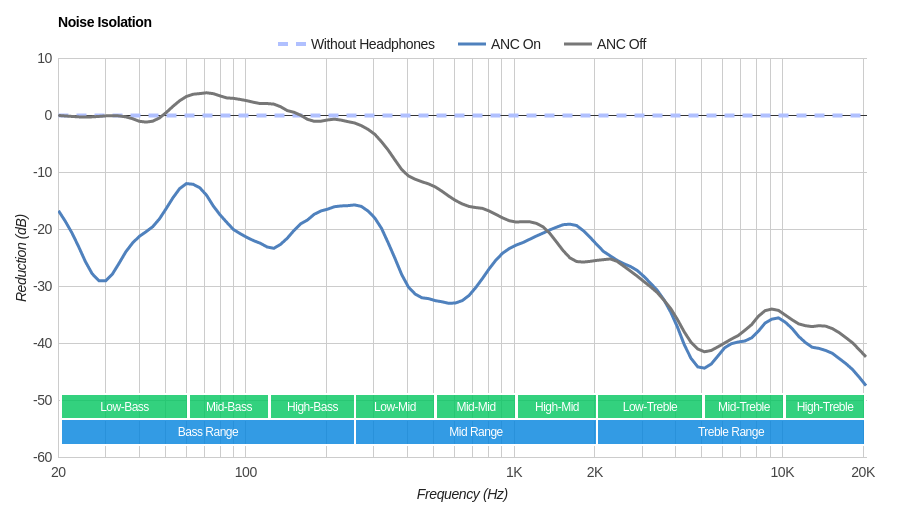 What it is: How loud the headphones are and how much they excite their environment acoustically. If the headphones are loud and open enough, the sound leaking from the headphones will be affected by the environment (reflections/reverb) before reflecting back into the open headphones and to the listener's ears. This quality is monaural and can be perceived even with one ear. This value is the inverse of the Leakage test score.
When it matters: Headphones with higher excitation values, similar to openness, tend to have soundstages that are perceived as more open and spacious.
Good value: >7.5
Noticeable difference: 0.5
Score distribution

This value is the inverse of the leakage score. That is, the leakier a headphone, the more they acoustically excite the room they are in. Acoustic Space Excitation (ASE) is included in the soundstage category since the soundstage of certain headphones can be subtly affected by the room they are located in. For example, with very open and leaky (loud) headphones, it is possible to hear a small change in soundstage as one moves from a large dead environment to a small and reflective room. 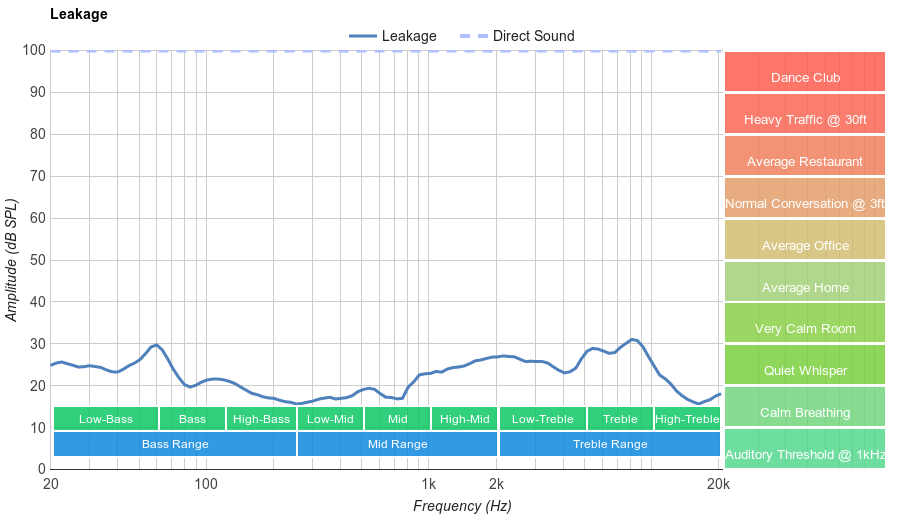 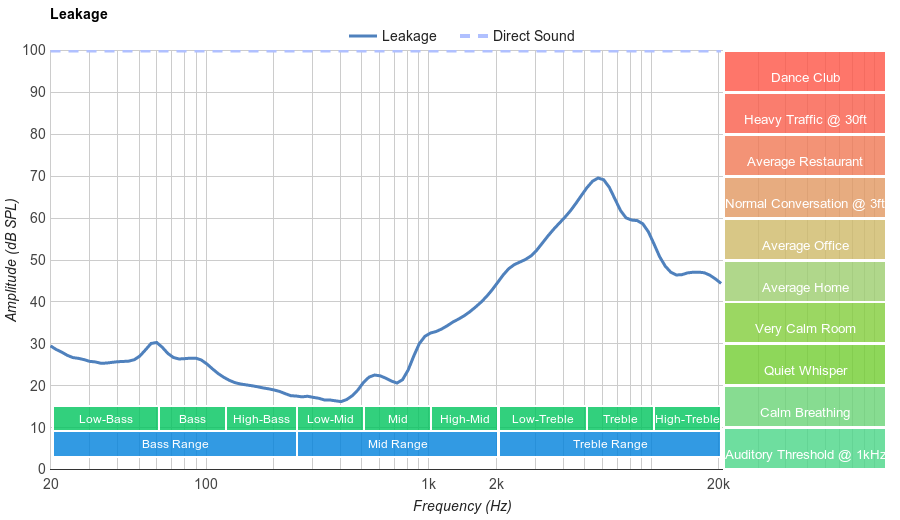 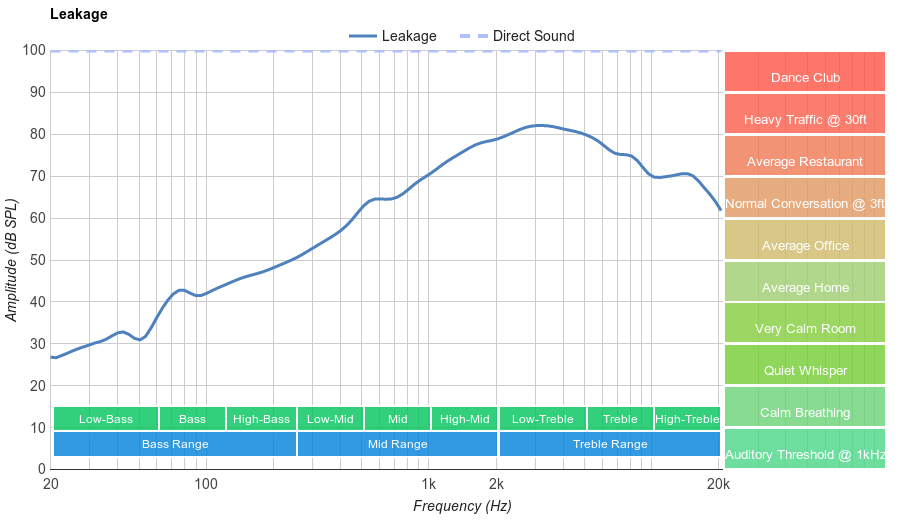 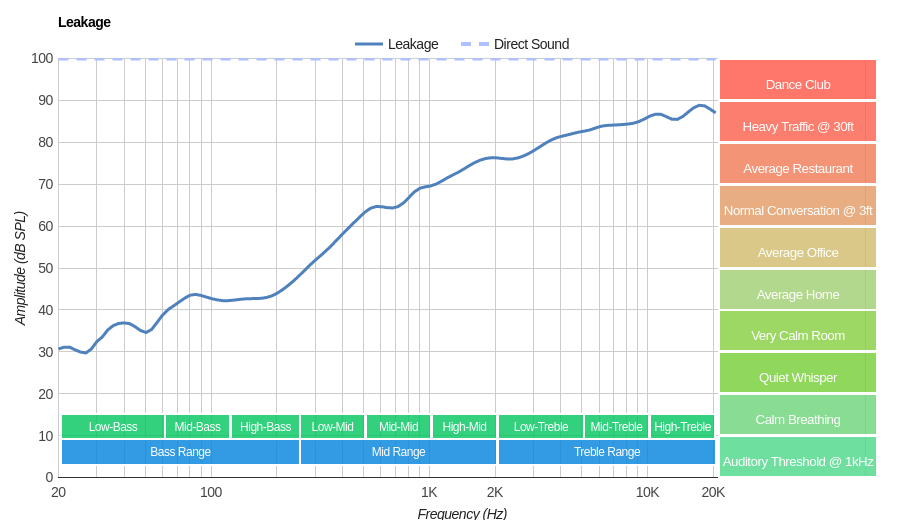 At the moment, PRTF measurements are only performed on over-ear and on-ear headphones. That's because earbuds and in-ears fully bypass the pinna and don't interact with it, and their PRTF response would basically be a flat line, as can be seen in the examples below: 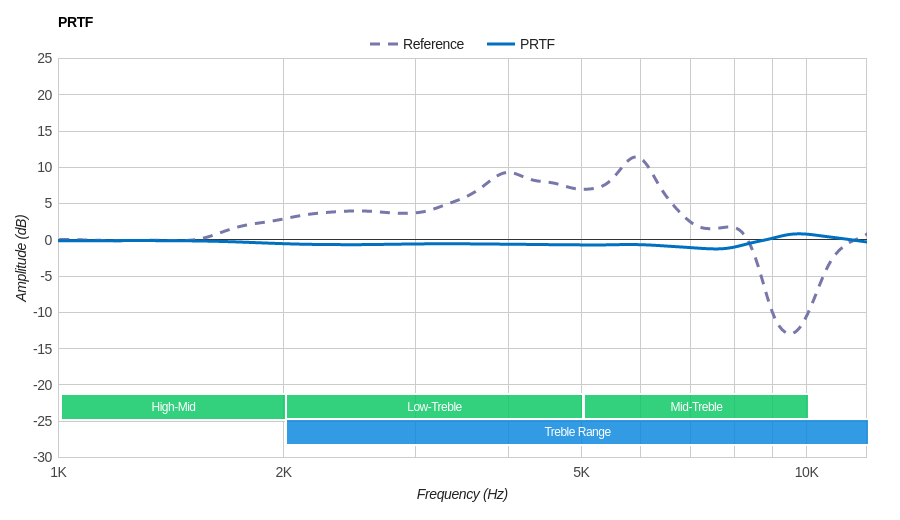 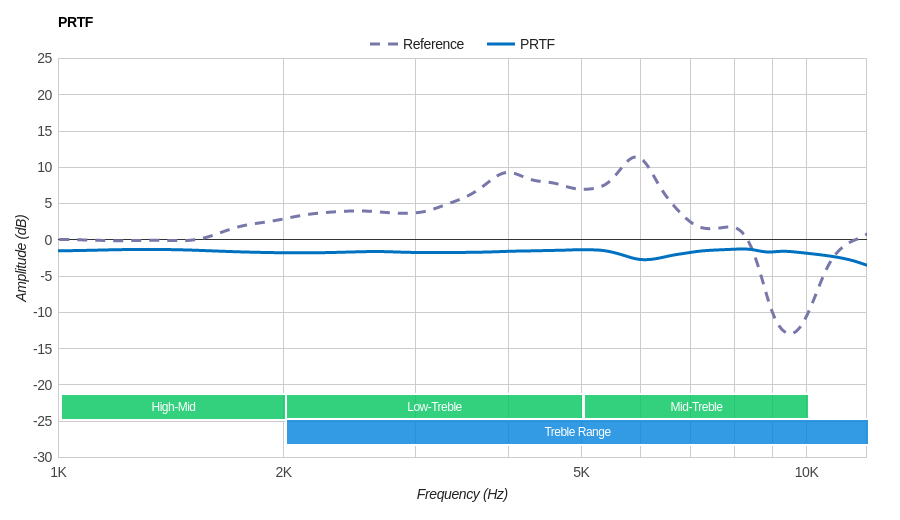 If you feel there is an item missing that should be included, please let us know in the Q&A section or via email.