Looking to get a deal on your next TV purchase? If you find a deal that isn't listed, send us an email at tv@rtings.com and we will update this page.

If you're in Canada and looking for Canadian deals, click here.

The Sony X900F is a great 4k TV with impressive picture quality, especially in a dark room due to the high native contrast ratio and full array local dimming support. The TV excels at HDR as it can produce bright, vivid highlights.

The TCL 5 Series is a good budget 4k TV with good picture quality, a great response time, and outstanding low input lag. It has an excellent contrast ratio and great black uniformity, so it looks great in a dark room, but like most VA panels, the image degrades when viewed at an angle.


The Samsung RU7100 is a good 4k LED TV that has decent overall picture quality. It can deliver deep blacks, thanks to the high native contrast ratio, and it is good for a dim room.

The Vizio P Series Quantum 2019 is a great 4k TV. It looks good in a dark room thanks to the excellent contrast ratio and great local dimming feature.

The Samsung Q70R is a great 4k QLED TV with impressive picture quality. It can deliver deep uniform blacks in a dark room thanks to the high native contrast ratio and decent local dimming support.

The LG C9 OLED is an excellent TV. Like all OLED TVs, it delivers outstanding dark room performance, thanks to the perfect inky blacks and perfect black uniformity. It has an outstanding response time, delivering clear motion with no blur trail, but this does cause stutter when watching movies

The Sony X950G is an impressive 4k TV with great picture quality. It can display deep blacks in a dark room thanks to the high native contrast ratio and full array local dimming support.

The Sony X800G is a decent 4k TV with an IPS panel, which delivers wide viewing angles and good peak brightness. It has very good motion handling, with an excellent response time, so fast-moving objects look great, with very little blur behind them.

The Samsung Q60R QLED is a good 4k TV that delivers good overall picture quality, with deep blacks and a wide color gamut. It has a nearly identical design to last year's Samsung Q6FN. You can also get a similar deal on the 55" from Costco.

The TCL 6 Series (R617/R615) is a very good 4k TV for a wide range of usages. It has good dark scene performance due to the full-array local dimming and high native contrast so blacks appear deep even in a dark room. The R613 is identical to the R617 including the voice remote, but does not include the private listening feature of the P607.

The TCL 4 Series 2019 Roku Smart TV is a decent TV overall. It delivers decent picture quality and displays deep blacks in a dark room thanks to its high native contrast ratio.

The best times of year to buy a TV

Unlike some other tech devices, TV models aren’t intended to be sold for multiple years. The majority of TVs are released, sold for about a year, and then discontinued when the next year’s models come out.

If you want to be on the cutting edge, the best time to buy a TV is in spring/early summer, when the bulk of the year’s new models are released. If you’re a bargain hunter, there are better times of the year to make your purchase.

To illustrate how TV prices change over the course of a year, here is a simplified chart that approximates how a TV's price changes over the year. 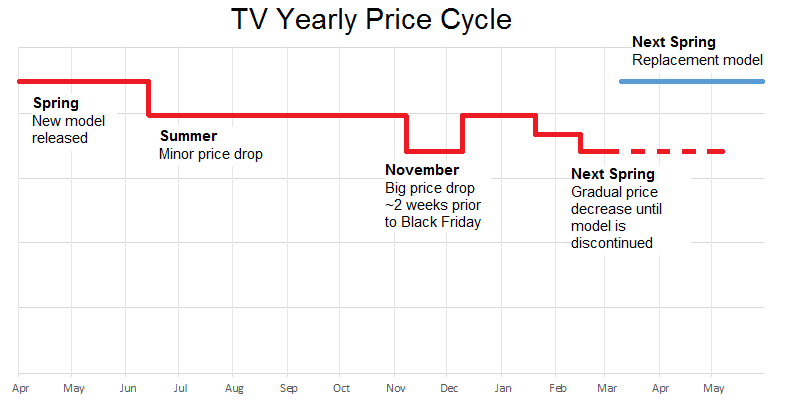 Every year, most brands release most of their new lineup in the spring. Thanks to minor deals here and there, those TVs will typically fluctuate down and back up in price for a few months, with a slight overall decrease over that time. Then, most will get a huge cut a couple of weeks before Black Friday and the holiday shopping season.

By the new year, they go back up to about where they were pre-holiday, and then see a few cuts throughout the next months, leading up to the release of the new year’s models in spring and early summer, when you’ll again see a large decrease - largely because they have been discontinued.

For a specific example, take a look at this more detailed chart of the price fluctuation of the Samsung UN65H7150 from its release in spring 2014 to its discontinuation in spring 2015.

The same trends are consistent for most TVs, meaning that the overall best times of the year to buy a TV are around the holiday shopping season, and then once the next year’s models are being released. For an even better deal, you could also wait longer, until well after the next year’s models have been released, as prices for older models will usually continue to drop. Just keep in mind that by doing this, you run the risk of the model you want selling out forever.

Where to get a good deal

All retailers have the same price

Several TV manufacturers - including Samsung, Sony, Sharp, and LG - have what is called a ‘unilateral pricing policy,’ which means they set the prices at which their TVs are sold in every store. Typically, this means every store selling a given TV model will be selling it for the same price as all the other stores.

Legally, retailers do not have to honor this policy and could set their own prices if they wished to do so. Also legally, the manufacturers can refuse to do business with retailers that don’t comply with the UPP, which is why all major retailers do.

These UPP policies are also why recent years have seen fewer unique sales on televisions than in years past. Now, chances are that if a TV is on sale at, say, Amazon, it’s also on sale for the same amount at other retailers, like Target or Best Buy.

Note that some brands, like Vizio and Panasonic, don’t have this policy, and so you can sometimes find real sales on those TVs (as well as other non-UPP brands).

If you see a retailer you are unfamiliar with is selling a TV for much lower than the competition, chances are good that the deal isn’t genuine, or comes with a big catch.

Here is a typical example. A website is selling two ‘versions’ of the same TV - usually a Samsung, but it could be done with any brand - and the two versions are called something like the ‘NA/domestic’ version and the ‘AU/CA/international’ version. Typically, the latter is a good deal cheaper - expect to see the NA/domestic version marked up - and though any difference between the two is generally left unclear by the listings, the implication is that the AU/CA/international version is the better buy.

This sort of deal is not genuine and often plays out this way: After the sale, the seller urges the buyer of the cheaper model to ‘upgrade’ to the more expensive option and, if the customer refuses, the sale is canceled. In short, this false comparison is nothing more than an upselling trick designed to get people to pay more money for a particular TV.

So, as a rule of thumb, if you see a particular TV is only on sale at one location, be suspicious. If you see that there is an ‘alternate version’ on sale at that location for a very different price, don’t bother buying from that store.

To shop with confidence, make sure you buy from an authorized retailer of the brand you are looking at. For the brands we review, full lists are available at the following links.

While there are occasional deals on TVs throughout the year, people who want a bargain should do two things: buy their TV during the holiday shopping season or right when the next year’s replacement models are coming out in the spring and buy from a reputable dealer. Doing both of these things will ensure you get a good price on the TV you want, and also that you don’t have to deal with shady business practices.