The 4 Best Samsung TVs of 2022 Reviews and Smart Features 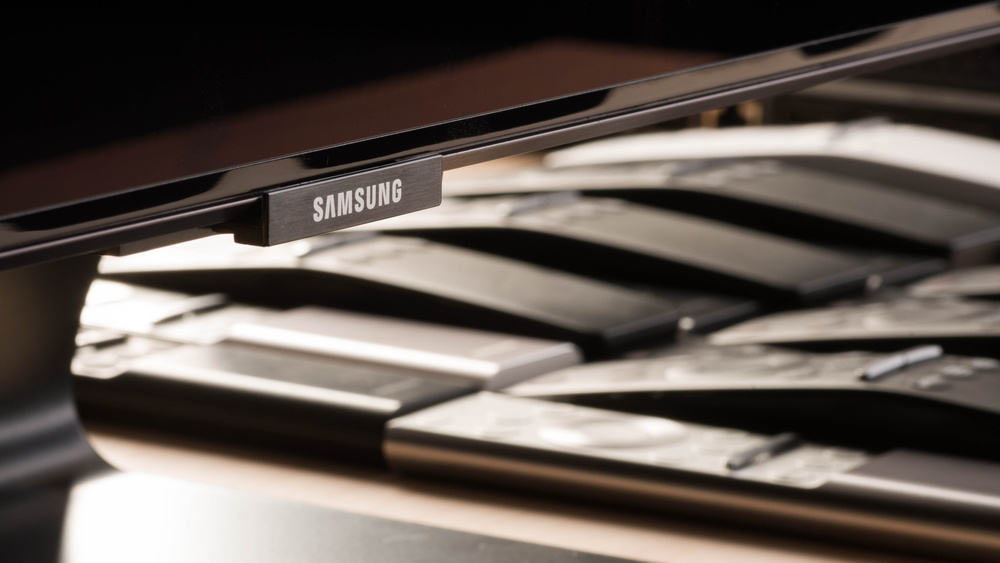 We've bought and tested over 100 Samsung TVs. Samsung TVs, generally speaking, are very versatile and can provide good-to-excellent picture quality. Samsung is known for its LED models which generally have great gaming features. Samsung introduced their new Neo QLED TVs in 2021, which is an improvement on their more traditional QLED lineup because it introduces Mini LED backlighting, and combined with the quantum dot layer, their high-end TVs provide great picture quality. Along with Sony, they also released the first QD-OLED TV in 2022 to compete with LG's OLED lineup.

Samsung TVs usually have more gaming features than Sony TVs, like VRR support, and they also have a lineup with more TVs. Sony TVs, in comparison, are usually built a bit better, with mostly metal construction. They also tend to have better color accuracy, but Samsung isn't far behind in that regard.

Samsung TVs provide a performance suitable for most buyers, but they can also be costly compared to some competing brands. They generally perform very well and are among the best TVs on the market, especially if you want gaming features. However, competition is currently tightening up, so Samsung LED TVs don't seem to provide as much value as they previously did, but they also released one of the first QD-OLED TVs available.

Samsung's focus this year is mainly on improving the software that powers their smart TVs, with mainly incremental improvements to most of their lineup. The obvious exception is their new S95B, which is their first Quantum Dot OLED display (QD-OLED), which uses blue OLED panels combined with quantum dot color filters to achieve a brighter image and more accurate colors. Gaming is a definite priority for Samsung this year, as most premium models have new gaming features, including an all-new Gaming Hub, a 144Hz refresh rate, and HDMI 2.1 bandwidth on all four ports. They've also refreshed their Lifestyle TVs, including the Frame, Serif, and Sero. All three models now feature matte finishes to reduce glare, and there are new mounting options for the Frame, including a rotating slim mount.

Samsung's lineup covers everything from budget to high-end models. As a rule of thumb, the higher the number, the better it is, although sometimes the improvements aren't worth it. The suffix letter in their model number corresponds to the year:

Samsung uses the prefix Q* to denote their high-end QLED models, and the last letter of these models also demonstrates its year, corresponding to the list above (i.e., the Q90T is a 2020 QLED TV). They introduced the Mini LED lineup in 2021, labeled with QN in the model name, like the Samsung QN90A. As for their non-QLED models, the prefix letters denote the year. For example, the AU8000 is the 2021 entry-level model.

In the infancy of smart TVs, Samsung was the leader in functionality and smart features. It isn't to say that they were very good, as it took quite a few years for Smart TV platforms to mature into something comparable to external set-top boxes. However, other companies have caught up to Samsung and offer similar all-around performance, like Roku TV or LG's webOS, so the best Samsung smart TV isn't much better than smart TVs from other brands.

Samsung has constantly been updating its Tizen platform to ensure it competes with its competitors. In 2017, they added voice capabilities to their remote and smart platform, making it easier to navigate through menus. In 2018, they added Bixby virtual assistant, so you can use voice control to control other Samsung devices in your house, like lights, fridges, and door locks. The 2020 update featured a new, sleeker look with a 'Dark Mode' that isn't as bright as the white theme in older versions, and the 2022 version has a new full-screen webpage, which is an improvement over past versions that had all the apps and settings in a toolbar. 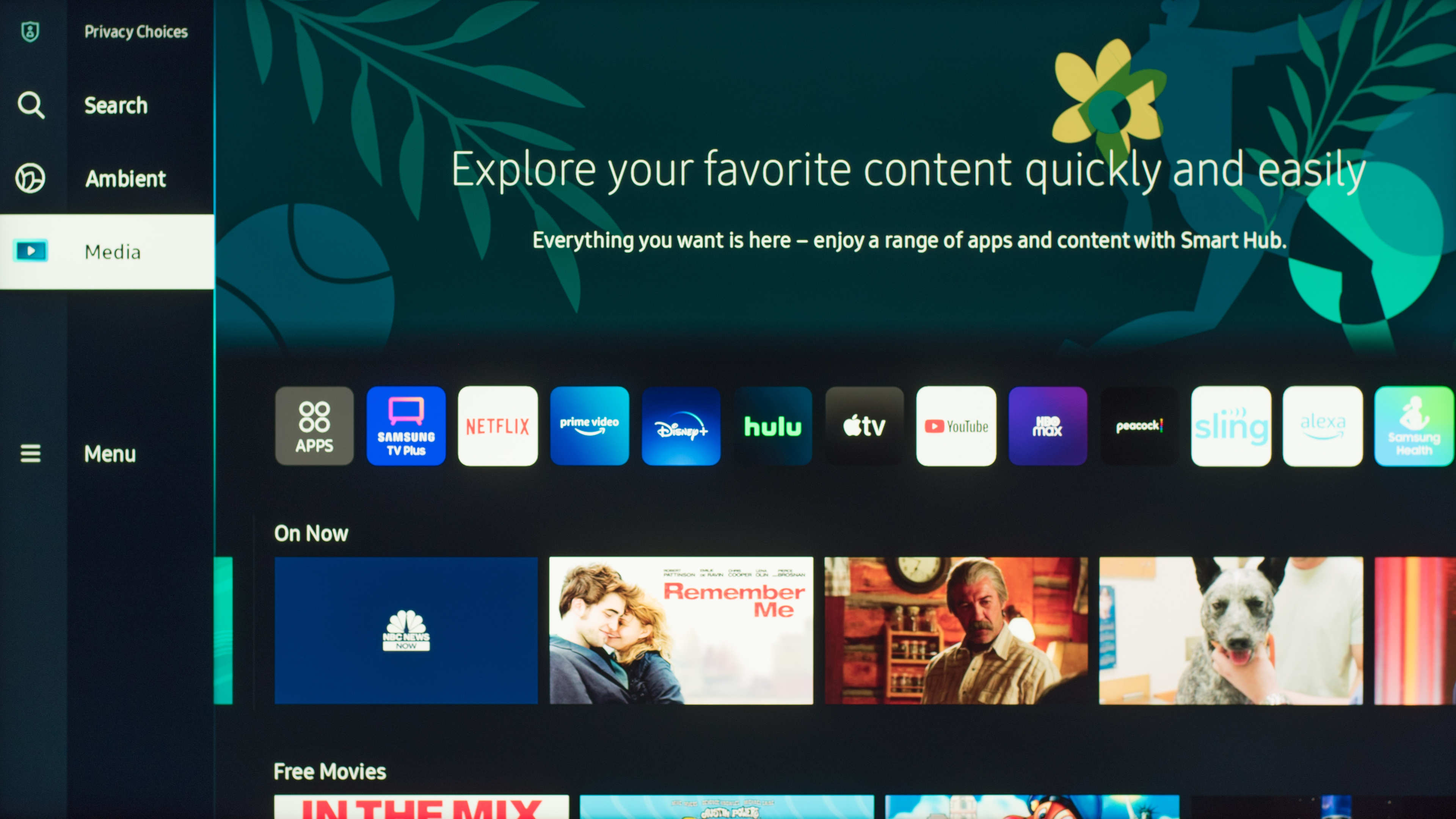 The interface is very simple and easy to navigate. As of 2022, they now have a full-screen webpage instead of the toolbar they had in past years. You'll find downloaded apps here, and you can quickly access the different inputs and settings. The interface works well, and there are many animations, but these can be slower on lower-end TVs. 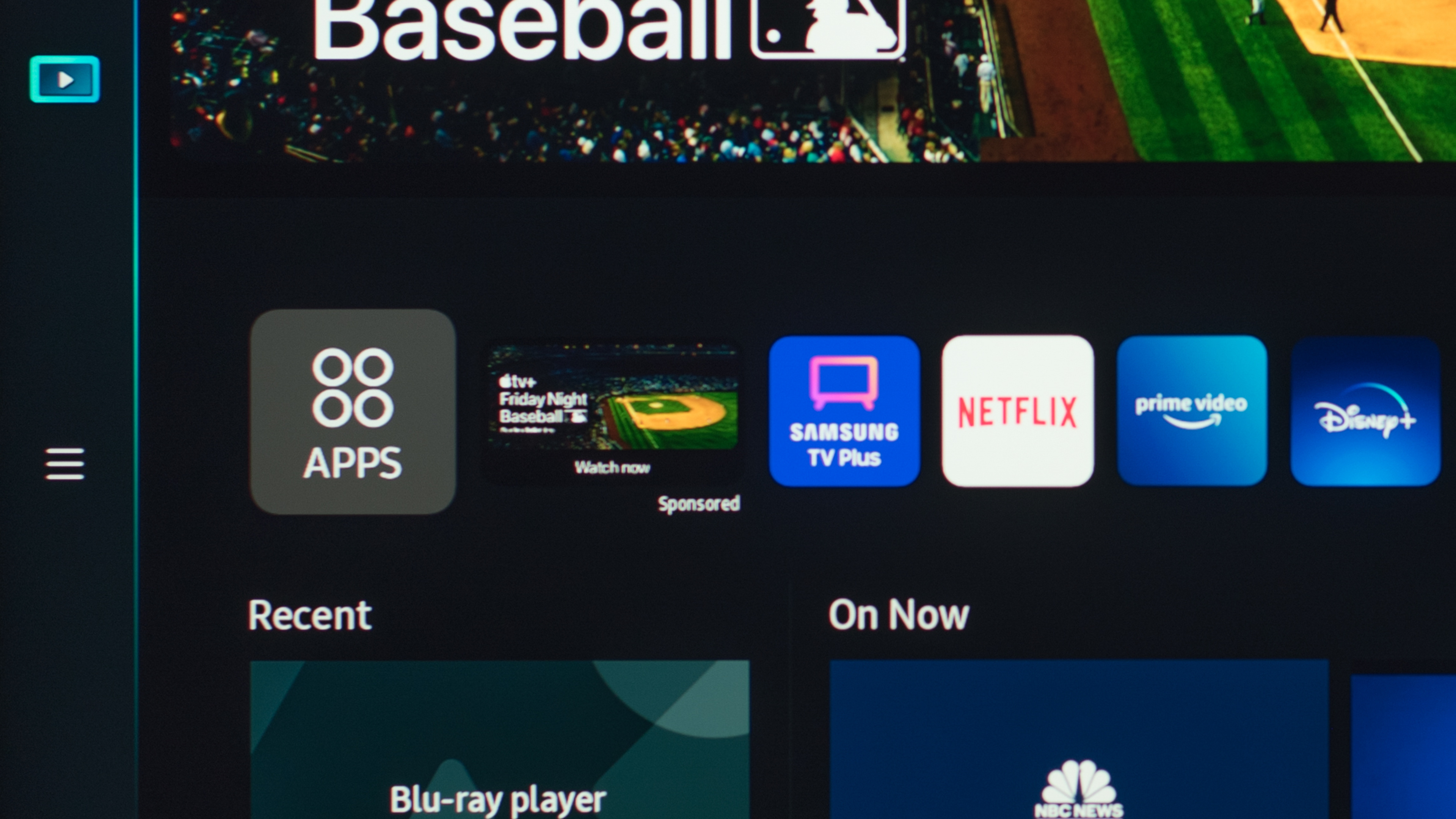 Unfortunately, Samsung's Smart Hub also shows ads on the home screen. It shows up in the same row as the installed Samsung Smart TV apps, and they can't be disabled.

You can opt-out of personalized advertising in the settings, but that, unfortunately, only means that you'll see very repetitive ads instead of targeted ones. 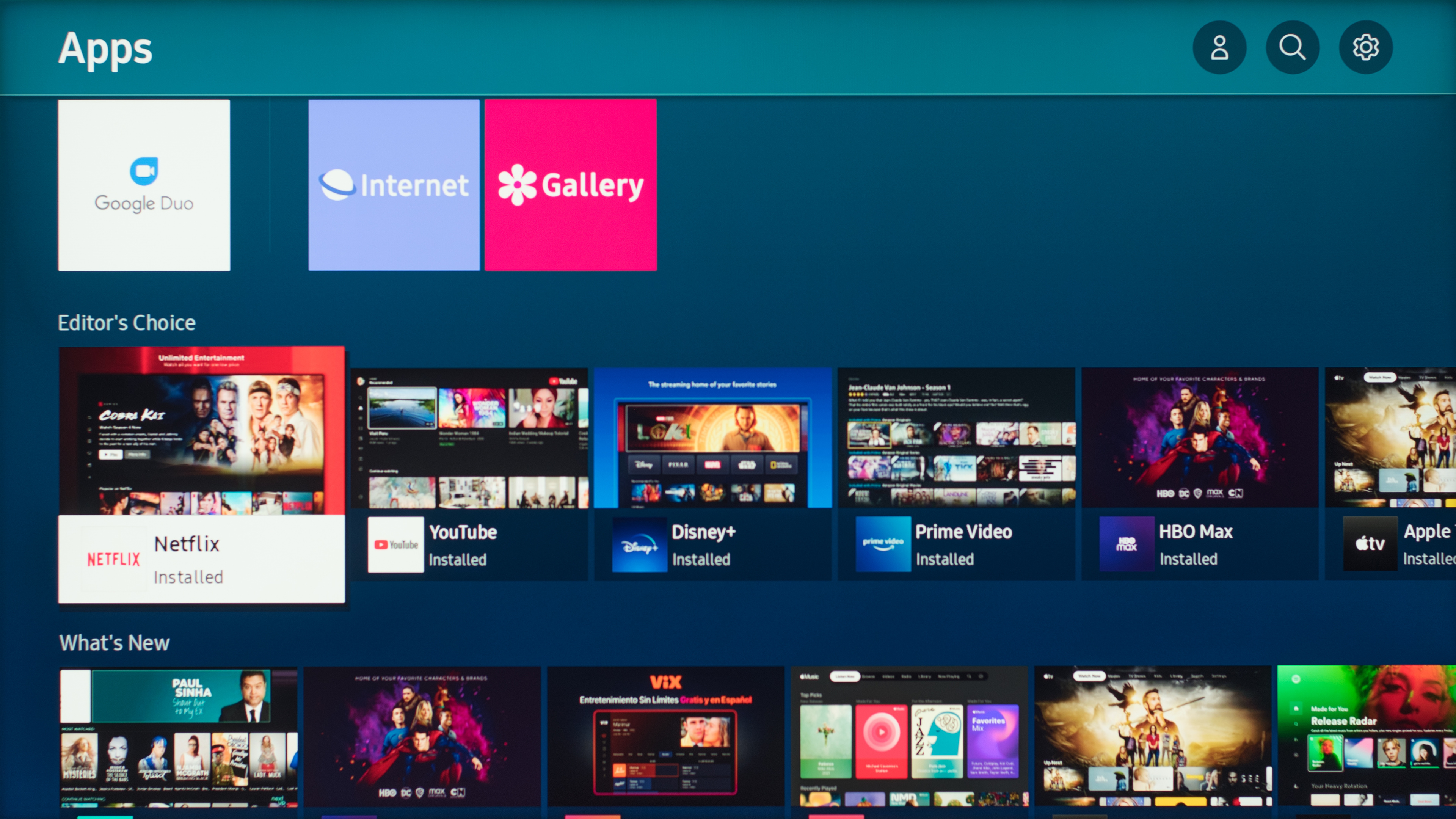 The app selection is pretty extensive nowadays. All the popular video and music services are available and more. Fortunately, the search function is quite good, and results come up very quickly. Like LG's webOS and Google TV on Sony TVs, Samsung TVs have an excellent selection of apps, and the vast majority of streaming services are available.

Voice Command was overhauled in 2017, and they're pretty good now. Other smart interfaces were updated in 2018 to search for content, apps, and change settings, something Samsung has been able to do for a few years. Even more in-depth stuff like calibration settings are only a button press away, which is quite nice. 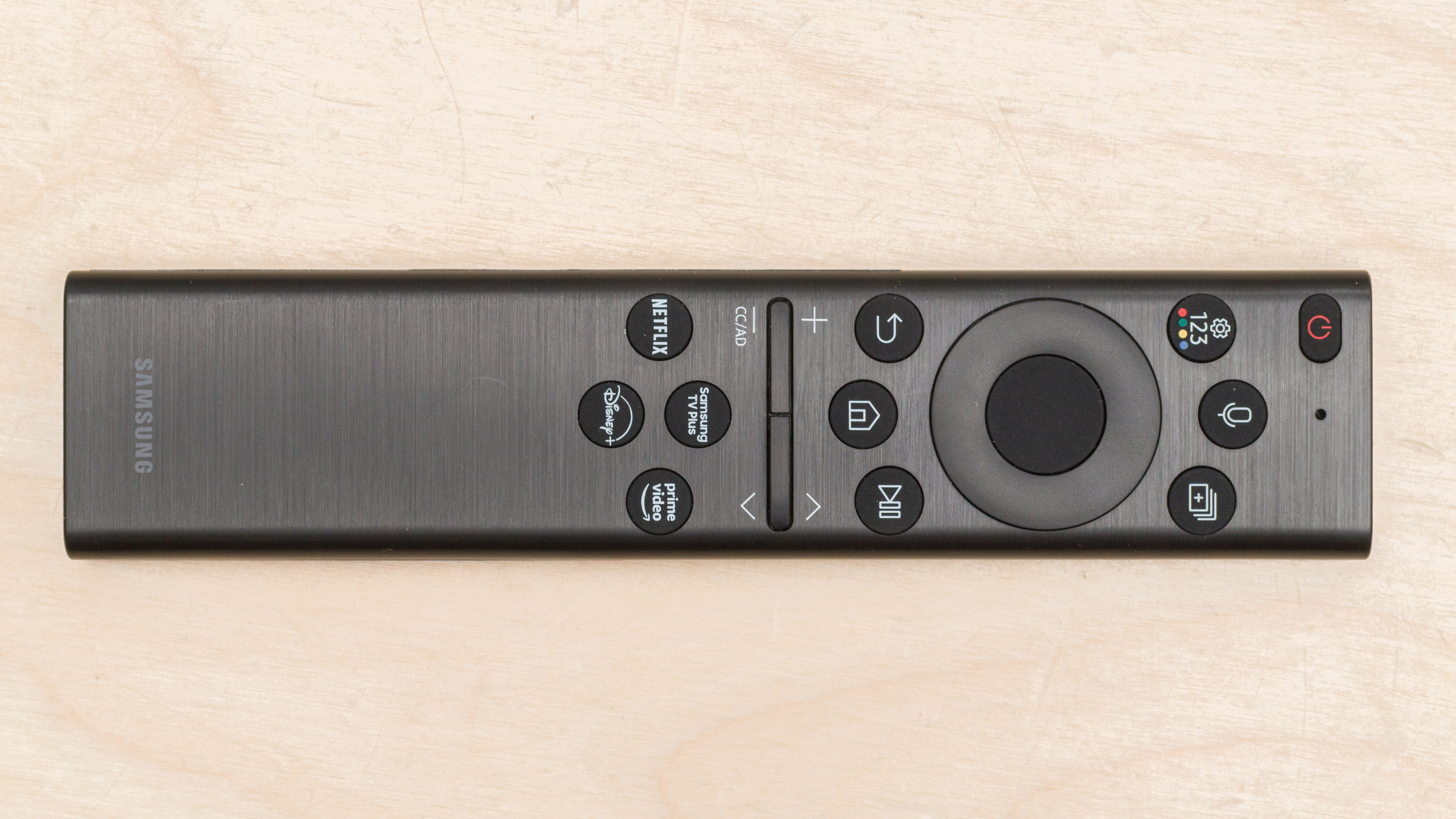 Samsung updated their remote with the release of the 2022 TVs. It features the same buttons as remotes from previous years, except with a redesigned body with brushed plastic on the bottom. There are quick-access buttons to popular streaming services and for your voice control. It's pretty minimal compared to traditional TV remotes, as you don't get a Numpad, but you still get navigation buttons. It's small and sleek-looking.

What sets this remote apart is that the QLED lineup comes with a solar-powered remote. It means that you can charge it via the solar panel on the back, and if that's not possible, you can still charge it via USB-C, but it doesn't come with a USB-C cable. The entry-level AU8000 from 2021 has the same remote, but it uses disposable batteries instead.

It's less common now than in previous years, but Samsung TVs often have issues with Wi-Fi connections. They'll randomly stop functioning after leaving the TV off for a while and require the connection to be set up again, which is quite annoying.

Samsung, in general, makes very good TVs. Their range has crept up in price over time, but most people should still find a TV that suits their needs within it. Their smart features aren't the best, but they're still quite good. They're usually quite versatile and fit most uses. You might have to pay a premium for their TVs, but you'll get excellent picture quality, especially with the higher-end models. Whether you're looking for the best Samsung smart TV or the best overall TV, you'll find great picture quality.