The 4 Best LG TVs of 2023 Reviews and Smart Features 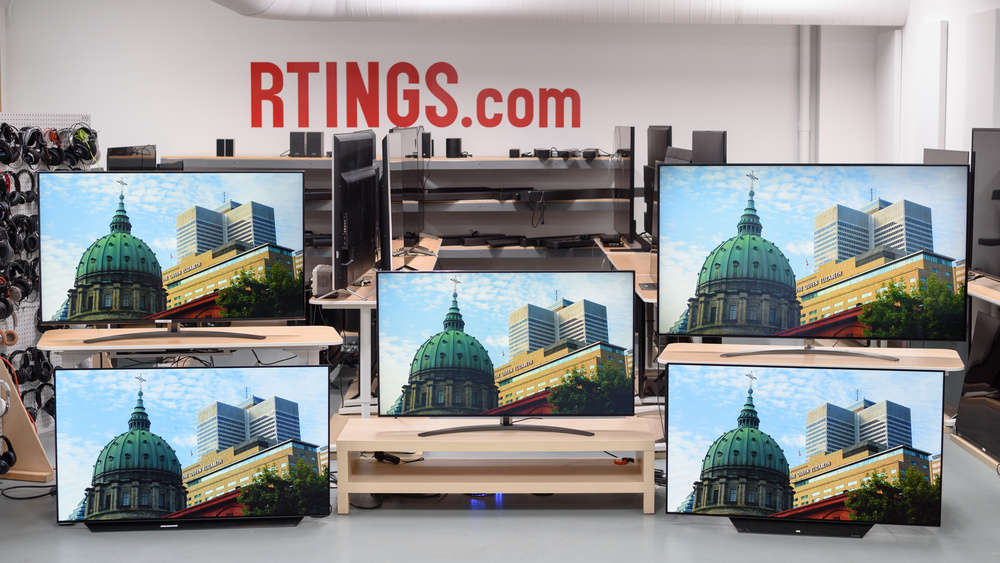 We've bought and tested more than 95 LG TVs. LG releases a lot of TVs every year, more than any other TV manufacturer. LG was one of the first brands to release TVs with OLED panels, and they've quickly become their most popular lineup. They also have a wide selection of LED TVs, ranging from entry-level 4k TVs to high-end models with Mini LED backlights. Unfortunately, most of their LED TVs use IPS panels and don't perform very well overall.

Samsung TVs have, on average, a better picture quality than most LG LED TVs. It's thanks to their use of VA-type LCD panels instead of LG's IPS panels, which trades contrast directly in front for wider viewing angles. This doesn't apply to LG's OLED series of TVs, which are better than Samsung's LED offerings in terms of dark room performance, and Samsung doesn't make any OLED TV.

Sony is a direct competitor with LG since their lineup also has LED and OLED models. LG's OLEDs have many more gaming features and generally cost less, but Sony's LED options usually have VA panels, making for a better dark room experience, and they have better color accuracy.

LG's OLEDs are among the best on the market, with stunning picture quality, and they're often cheaper than other OLEDs. However, their LED TVs aren't anything special and don't offer good value. While their IPS LCD offerings have a wide viewing angle, helpful for larger living rooms, the competition with VA panels often outperforms them in terms of overall picture quality.

LG announced most of their 2022 lineup at CES in early January 2022. Most of their models are very similar to 2021, with nothing groundbreaking coming out for most of them. They've simplified their lineup a bit, removing the number of sizes some models are available in. The biggest news concerns the LG C2 OLED and the LG G2 OLED, which use new evo panels, resulting in higher peak brightness levels than was previously possible, especially on the G2. They also plan on releasing OLEDs in new sizes, including a 42-inch and a massive 97-inch C2. Unlike Samsung, they don't appear to have plans to release QD-OLED displays. Not much has changed on their LCD models, as the lineup is nearly identical to the 2021 lineup. Not much is changing with their proprietary smart interface, known as webOS, either, but they're now using the year to identify the software version instead of version numbers, so the 2022 version is called webOS 22.

LG has a large lineup that covers everything from cheap and small lower-resolution TVs to very high-end with their OLEDs. The first letters correspond to the TV's resolution, the second letter in their model numbers corresponds to the year of release, and usually, the higher the number, the higher the price range.

Besides aesthetic changes, LG's webOS hasn't changed much over the years, which is good. A few years ago, it was, by and large, the best solution. While competition has tightened up since then, incremental and polishing updates allowed it to remain at the top. LG updated the platform in 2021 to include a full home page instead of the banner found in past models. 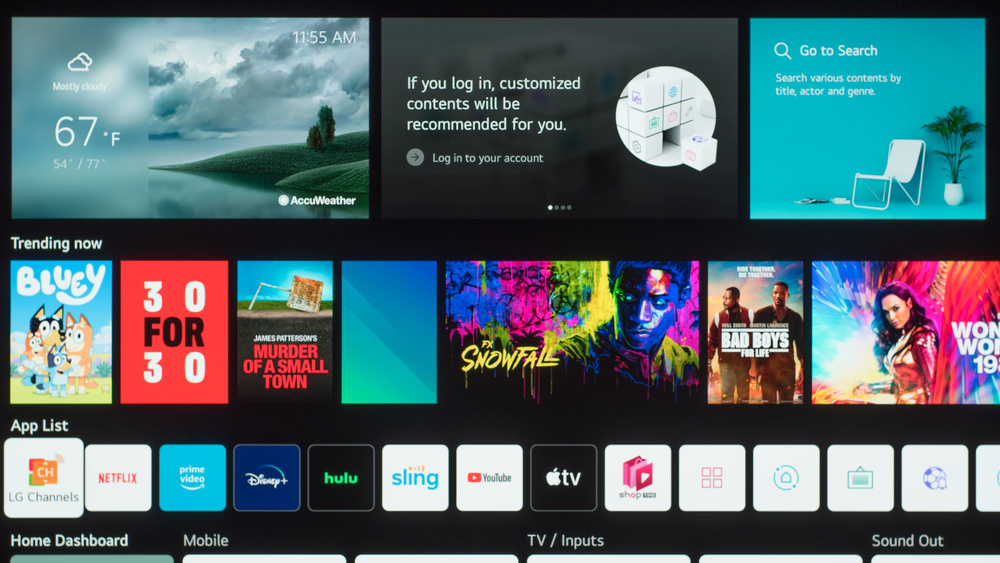 For a long time, webOS hadn't changed much in design since its introduction, but they completely overhauled it in 2021 with the release of webOS 6.0, and it's still one of the best-looking platforms. It's colorful, and its animations are both intuitive and beautiful. Everything feels responsive and snappy, and you are rarely left waiting for something to happen. The redesign replaces the menu ribbon of previous versions with a smart hub, complete with various widgets. Despite the new look, it still has the same smooth functionality and features that make it one of the best smart platforms. 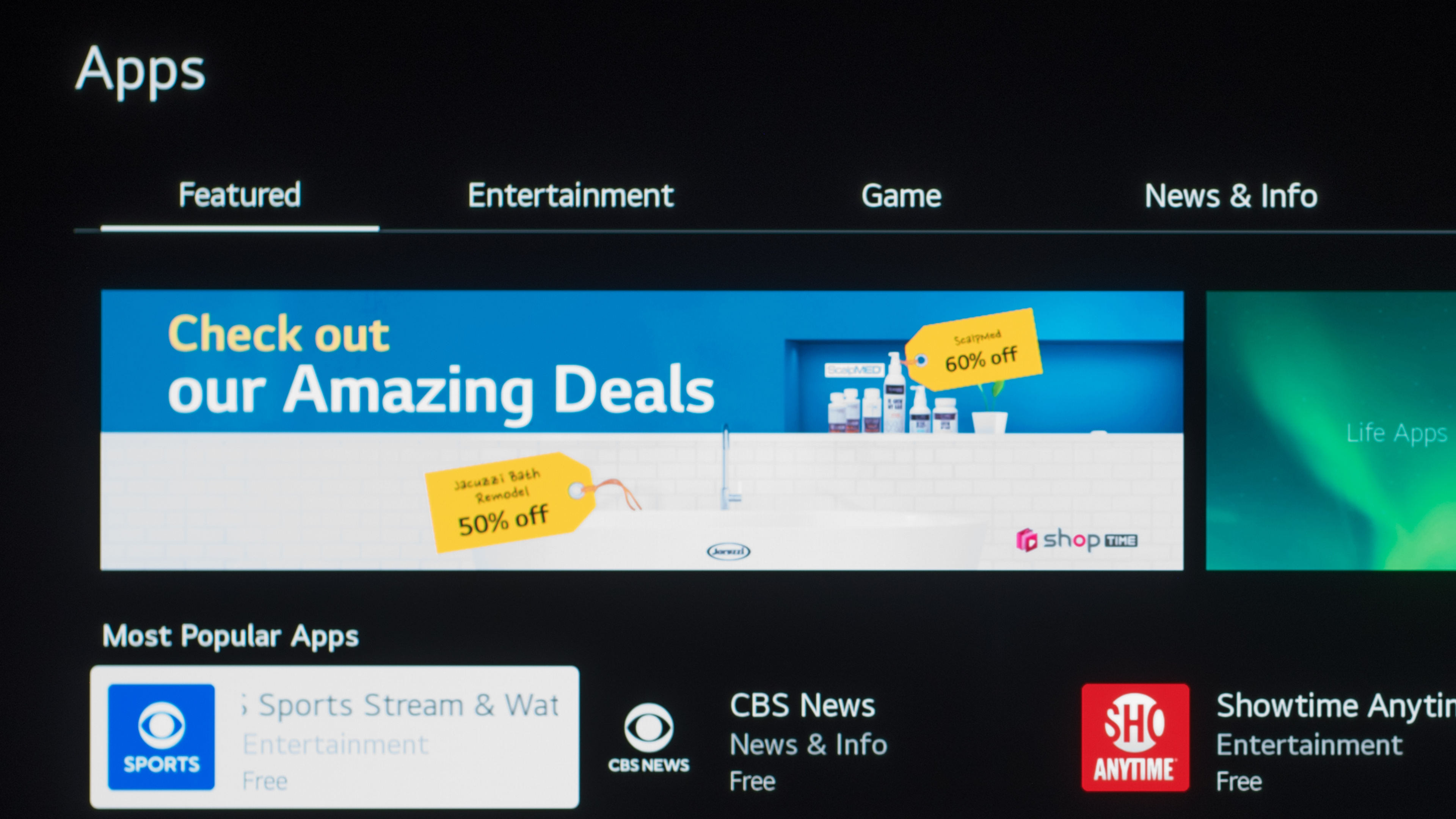 WebOS has one glaring issue: the inclusion of advertising sprinkled around the operating system. While we've yet to see them on the main screen, they're just about everywhere else. Voice search, app store, and web browser; all will sometimes show ads in their user interface. The worst is that there isn't a good way to disable them from within the TV itself. 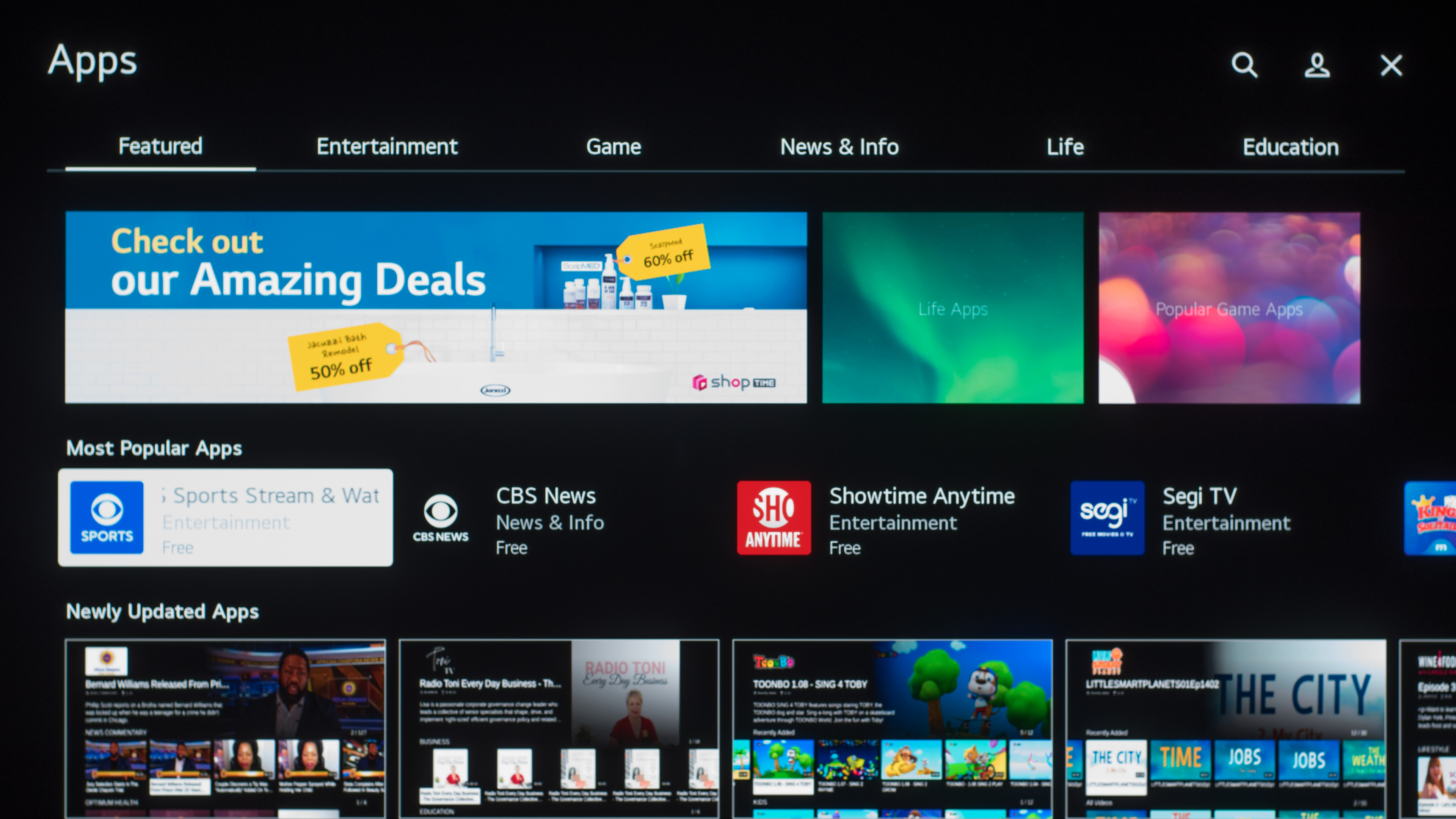 The LG content store delivers just about every app one would look for on a smart TV and offers direct rental of films. Essentials like Netflix, Amazon Video, and YouTube are all installed by default, but the range is continuously expanding. Overall, LG TVs have one of the widest selections of apps available on any smart platform.

WebOS TVs that come with LG's Magic Remote have voice control. The manufacturer redesigned the remote in 2021, but it has the same functionality as in past years. There's a big microphone button in the center of the remote that, once pressed, prompts the search interface. It helps search for content since it goes through most of your apps and allows you to even search for actors. Unfortunately, it doesn't have very in-depth control of the settings, like what you find on Samsung TVs, so you can't adjust the brightness without leaving what you're watching. The only thing you can't do is turn the TV off and adjust the volume.

Starting in 2018, WebOS 4.0 added a new voice control processor with ThinQ AI. The system can perform advanced searches similar to Siri on Apple TV. It can identify actors, search for sports scores, and even find pictures in your favorite cloud service based on keywords. It can also communicate with a multitude of smart home-connected devices, including lights and thermostats. Newer LG TVs can also interact with Google Home or Amazon Alexa-connected personal assistants. 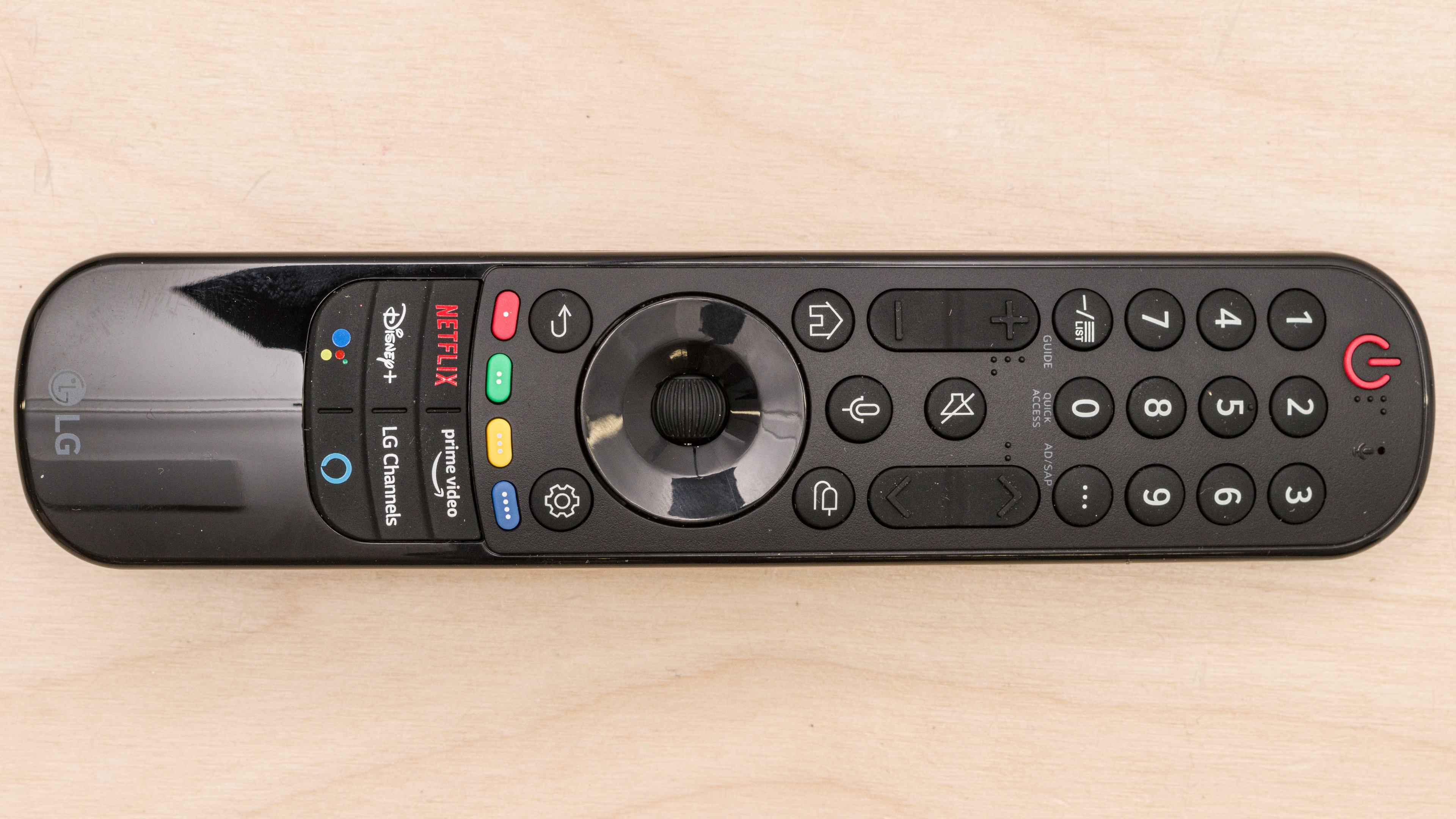 There are many more buttons on this remote than on Samsung’s, but they're clearly labeled and make it quicker to pick up the remote and use it – no tutorial or manual required. Some lower-end versions come with this Magic Remote, but the entry-level models have a basic remote without voice control, like the remote on the LG UN7000. LG’s remote app, called LG TV Plus, offers quick access to most of the controls and is compatible with all LG smart TVs. It isn't as advanced as some other remote apps, but it does stream content from your phone or tablet to the TV. It can launch apps and change inputs directly without using a navigation button to navigate the on-screen menus.

There aren't many issues with LG webOS. The previous version had some performance issues, with occasional hiccups and frequent dropped frames in animations. For the most part, these issues have been fixed, and the latest version performs extremely well, but the interface can still hang sometimes.

LG undeniably offers top-shelf products with OLED TVs. This technology is now quite mature and is the best for most people. Unfortunately, these processes don't reflect the rest of their TV range. While every LG smart TV comes packaged with its excellent webOS platform, the displays' performance often leaves a lot to be desired. They have consistently great viewing angles, but that comes at the cost of having mediocre picture quality in a dark room, quite the opposite of their OLED offerings.