The 4 Best Sony TVs of 2023 Reviews and Smart Features 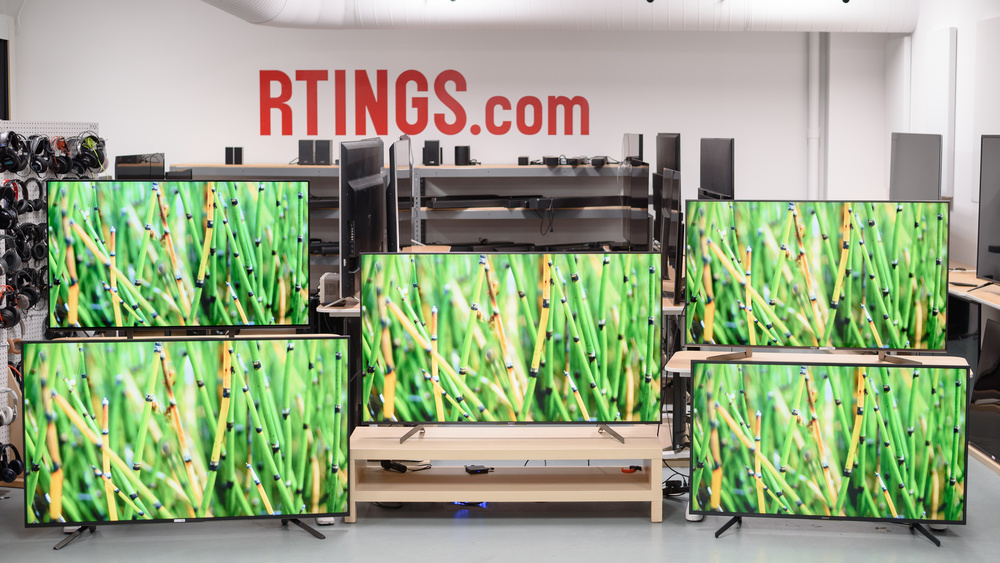 We've bought and tested more than 60 Sony TVs. The best Sony TVs are generally a pretty safe bet when looking for the best TV for your needs. They tend to have great picture quality, a few extra features, and good color accuracy. Their high-end and mid-range models compete well with other brands, although at a price premium, but sadly, they don't offer many budget-friendly options.

Samsung TVs have a picture quality comparable to Sony TVs, and in general, they're pretty competitive with each other. A big difference is that Samsung has better gaming performance, but if you don't need that, either brand is a good choice.

Sony and LG each make OLED and LED TVs. LG is the dominant OLED brand for OLEDs because they have better gaming performance and generally cost less. However, Sony's LED models are far better than LG's because they get brighter, have better uniformity, and usually have better contrast.

As a rule of thumb, it's pretty hard to go wrong when buying a Sony TV, especially if you don't need it for competitive gaming. Their more entry-level offerings aren't great, but any of the high-end LED and OLED models are a safe bet. Their Google TV smart platform offers tons of apps to download with an easy-to-use interface. You might pay a slight premium over competing models, but you'll usually end up with a good TV.

Sony doesn't release as many TVs as most of their competition, and some flagship models tend to stay on the market for longer. They mainly focus on mid-range to high-end TVs, with very few budget models. Their 2022 lineup is an impressive one, with multiple high-end models that take advantage of the latest technology, including their first QD-OLED TV, the Sony A95K, and their first two Mini LED TVs: the 8k Sony Z9K and the 4k Sony X95K. All their mid to high-end models use the same processor, the new Cognitive Processor XR, but the entry-level Sony X80K uses the older X1 Processor and is limited to a 60Hz refresh rate and HDMI 2.0 bandwidth. Sony has also refreshed the remote on their high-end models, including a "Find Remote" feature that works through the TV's built-in voice assistant.

Their product naming is easy to understand, and the 2022 lineup follows the same naming convention as in past years. If the model starts with A, it's an OLED; if it's X, it's an LED, and their Z Series is 8k. Next comes the model number, and the higher the number, the better. Lastly, the suffix letter indicates the year. So, for example, the Sony X800H is an entry-level LED model from 2020, while the A90J is a high-end OLED model from 2021.

Since 2021, all their TVs share the same model number worldwide, making it easy to identify models if you're shopping from a different region. That's not to say they're completely identical, though, as there are some slight regional differences, and not all models are available worldwide.

Sony has traditionally used Android TV as its smart operating system, and as of 2021, they've started to use Google TV instead. It's pretty much the same as Android, with a redesigned look and a few extra features. Those who already have Google or Android-based devices will already know how to navigate the interface, while there might be a small learning curve for others. The great thing about Sony TVs is that they have Google Chromecast built-in, so you don't have to buy an external device to cast compatible content from your phone or tablet. If you already have other Google devices, like Google Nest speakers, they'll easily connect with the TV, and you can ask your speaker to play content directly on the TV. 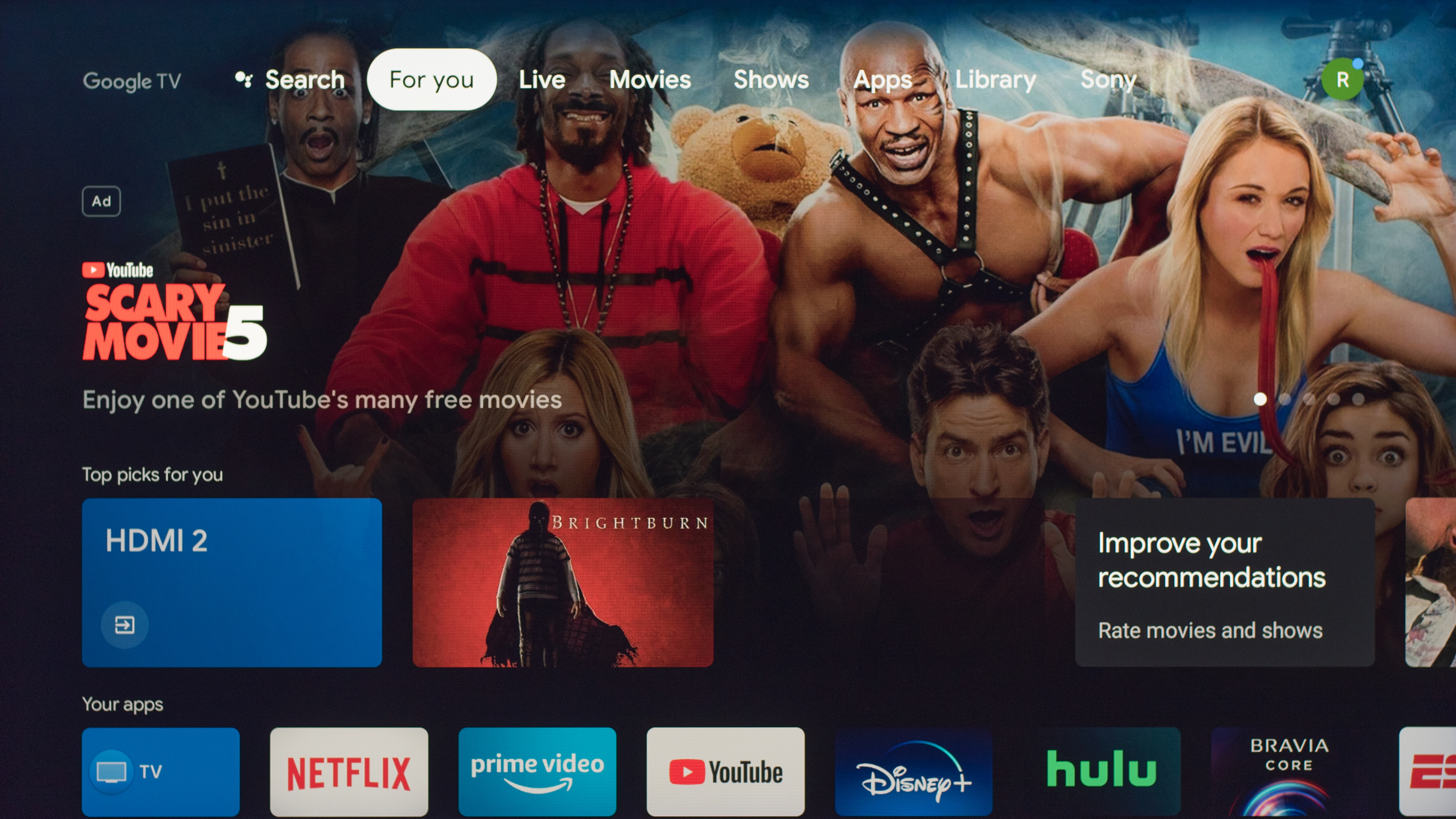 The interface is clean and pretty simple to navigate. It's divided into multiple rows, and each row presents content from different apps. These rows can be customized to your liking or even disabled completely. The interface isn't very fancy, which makes it much easier to navigate. 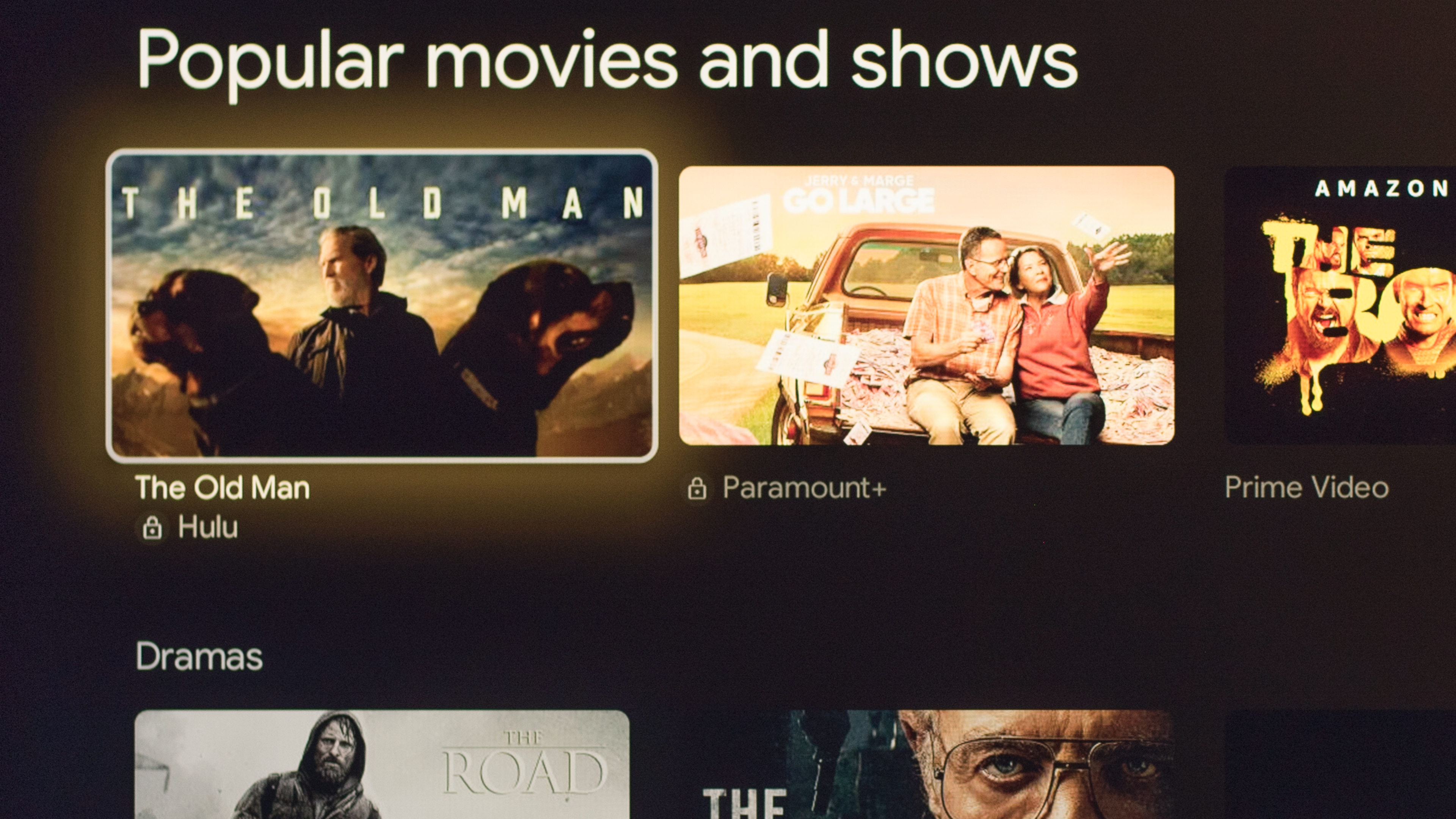 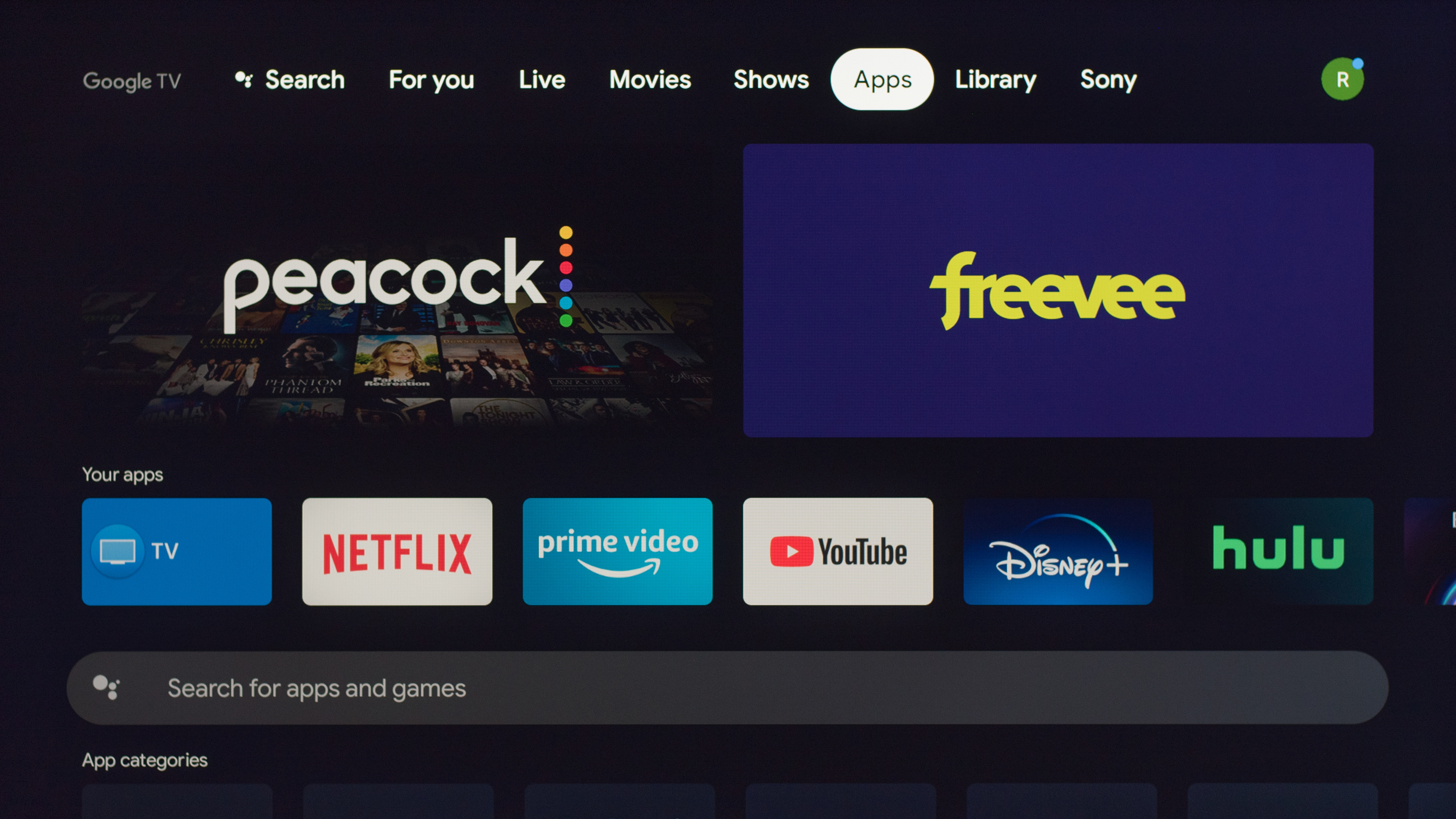 As expected, Google TV offers access to the Google Play Store, which has a massive selection of apps to download, even more so than competing brands. You won't have any issues finding your favorite streaming apps.

One area where Google TV excels is voice search, which gives you access to Google Assistant. Press the Google Assistant button on the remote and say what you’re looking for, and Google TV will deliver suggestions from the Play Store, YouTube, and relevant results from downloaded apps. It’s a convenient way to navigate content quickly and is often much faster than using the remote. You can also use it to change certain settings, like asking it to switch inputs or increase the brightness. 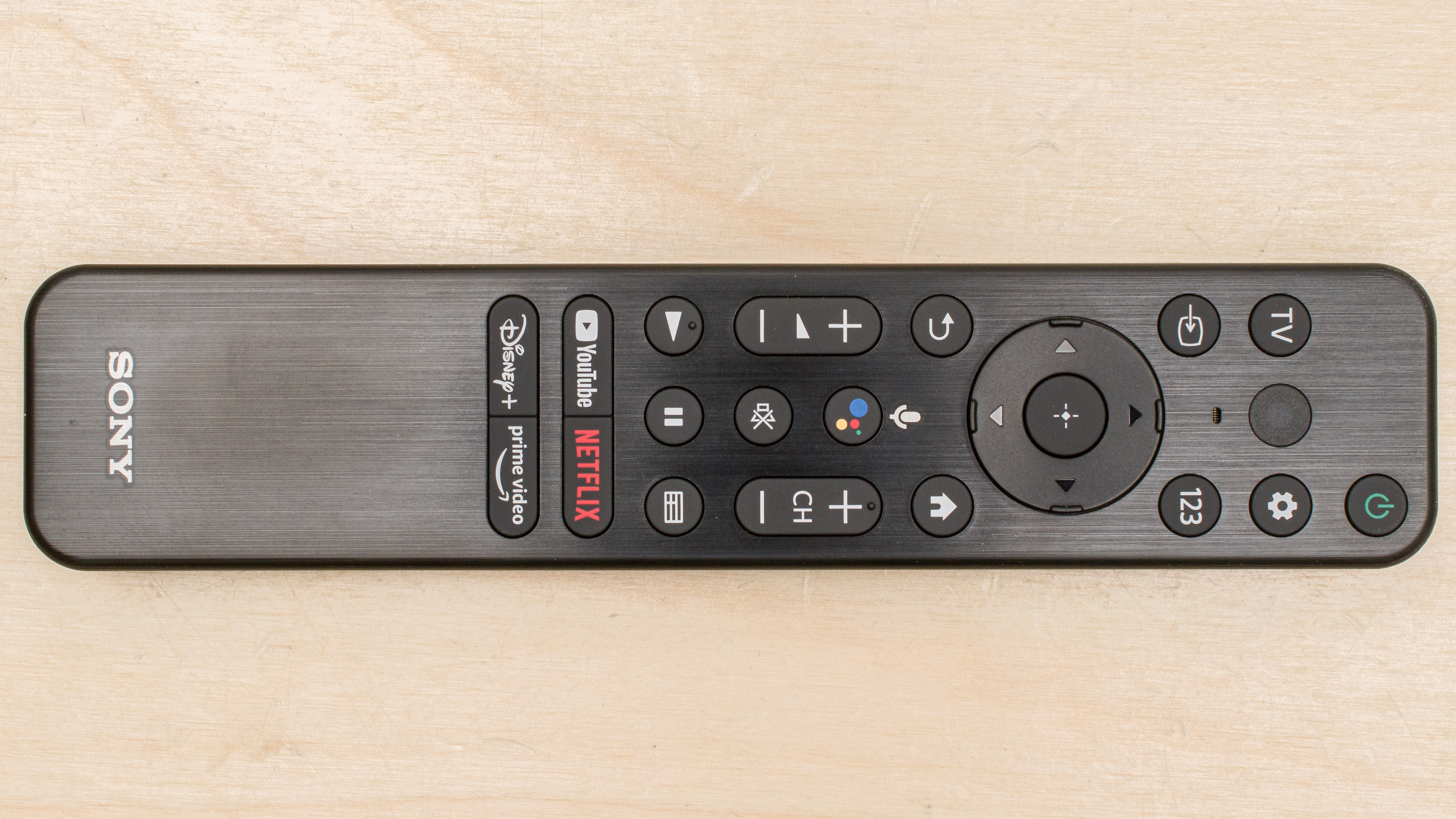 Sony released a redesigned remote in 2022. Unlike their past models, it doesn't have a Numpad and instead has a '123' button that brings up a virtual Numpad on the screen. However, it still has the same quick-access buttons to popular streaming services and has a button to quickly bring up Google Assistant. While most models ship with this remote, there are some models available from some retailers with a higher-end version with backlighting.

While they tend not to be the cheapest, Sony produces great TVs. They'll generally be quite versatile, which helps to make them suitable for most people. The smart features can take a bit of time to learn for some people, but the overall package offered by their TVs is still better than average. At this point, it's fairly safe to say that their overall reputation holds, and rare are the people that will find themselves disappointed by purchasing one of their TVs.