The 4 Best TCL TVs of 2023 Reviews and Smart Features 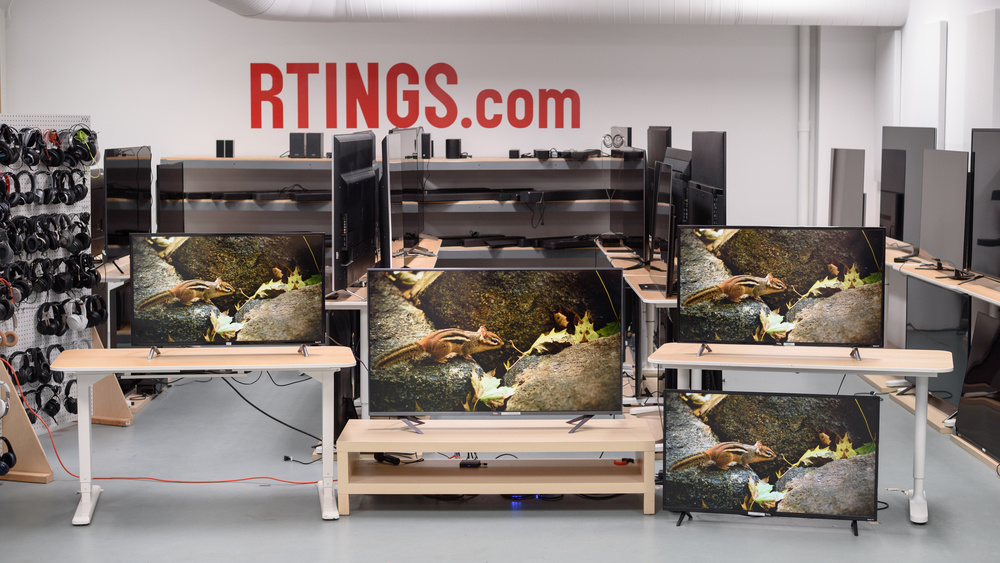 We've bought and tested more than 15 TCL TVs. TCL TVs have shown to offer great value over the past few years, and although they aren't as established in the United States as other brands, they've made a name for themselves. While they're traditionally known for their basic models with limited features, some of their recent releases feature the latest technology, including Mini LED backlighting and variable refresh rate (VRR) support. They're often available at a lower cost than their competitors, and most people will be pleased with their higher-end models. They mainly compete with Hisense, but they release models to compete with brands like Sony and Samsung.

Hisense and TCL are direct competitors in the budget TV market. Their TVs usually offer the same features and similar performance, although some TCL TVs don't get as bright. They each have flaws, as TCL tends to have picture quality issues, while Hisense has motion problems.

Vizio and TCL aim to produce TVs in the budget market, although Vizio makes a few more high-end models. Vizio TVs tend to have better dark room performance and more gaming features, but the Roku platform on the TCLs is much better and easier to use than the Vizio SmartCast system.

Overall, TCL TVs offer good picture quality and great features at a low price. Although some models aren't as feature-packed or as well-built as more expensive options, their TVs typically offer great value compared to similarly-priced options. If you need a simple TV with a good smart system, you'll be happy with most of their offerings.

TCL's lineup in the United States is usually smaller than other brands, and unlike other companies, their models are available for a few years. They have a few different series, including the XL Series, 6 Series, 5 Series, 4 Series, and 3 Series, and each series has models with different smart platforms. For example, the 6 Series includes the 2021 R646, which uses Google TV, and the 2020 R635 has Roku TV, so for each series, you can get the model with the smart platform you prefer. They release new models with each platform in alternating years, and although not much is known about their 2022 lineup, the TCL 4 Series/S445 comes with Roku.

TCL's model naming scheme is a bit confusing and inconsistent. The XL and 6 Series lineup start with an R, while the other lineups start with an S. Next is the number to indicate the series, and the last two numbers tell you which platform and year the model is from. Google TVs end in a 4 or 6, and Roku TVs end in a 5. For example, the S445 is a 4 Series model with Roku from 2022, while the S434 is a 2020 model with Google TV.

While the majority of TCL's TVs use Roku, there are a few from 2021 that use Google TV. They're both great smart platforms, and choosing one of the other comes down to personal preference. Generally speaking, Roku is easier to learn and feels quicker than Google TV, but Google is more customizable, and the Google Play Store has even more apps. 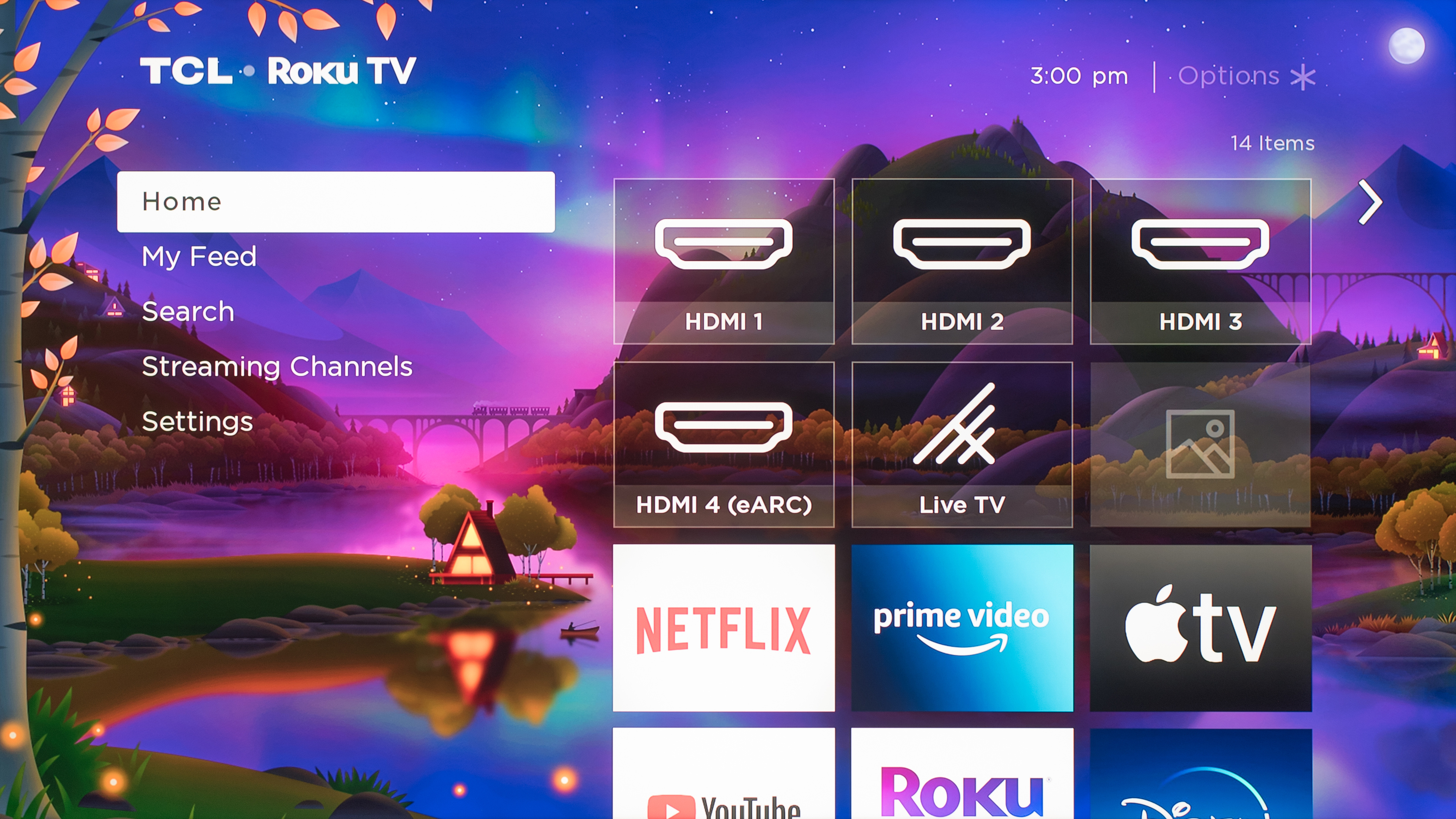 Roku's interface is very basic, with simple graphics and limited animations. It results in a very easy-to-use, fast interface that's relatively bug-free. It's also one of the few smart interfaces that support themes, meaning you can customize it a bit. 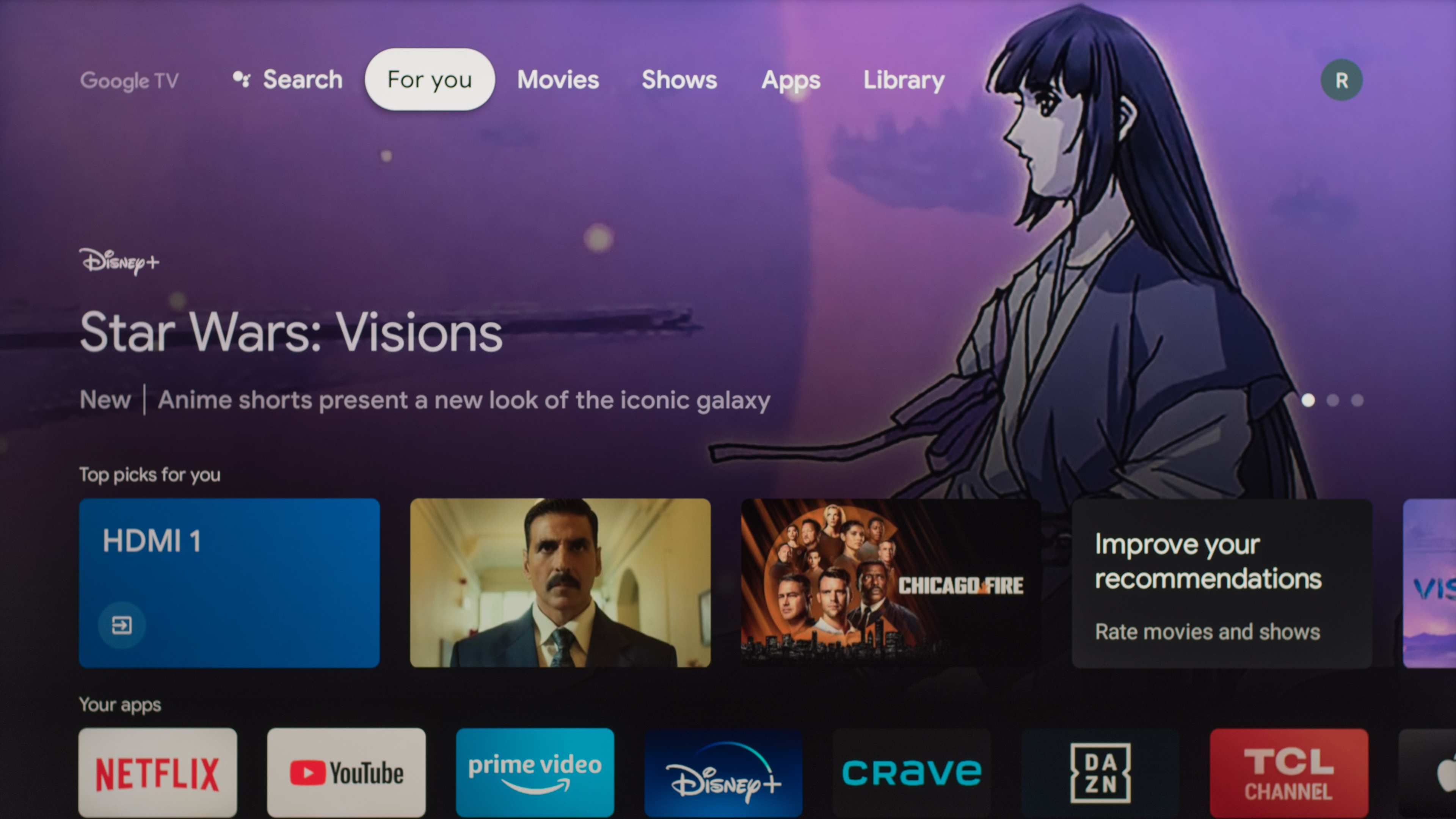 As for Google TV, it consists of multiple rows that you can customize to include which apps you see first and which apps you don't want to see. It's great if you're already used to it, but it can feel overwhelming if you aren't, so it takes a bit of time to learn. 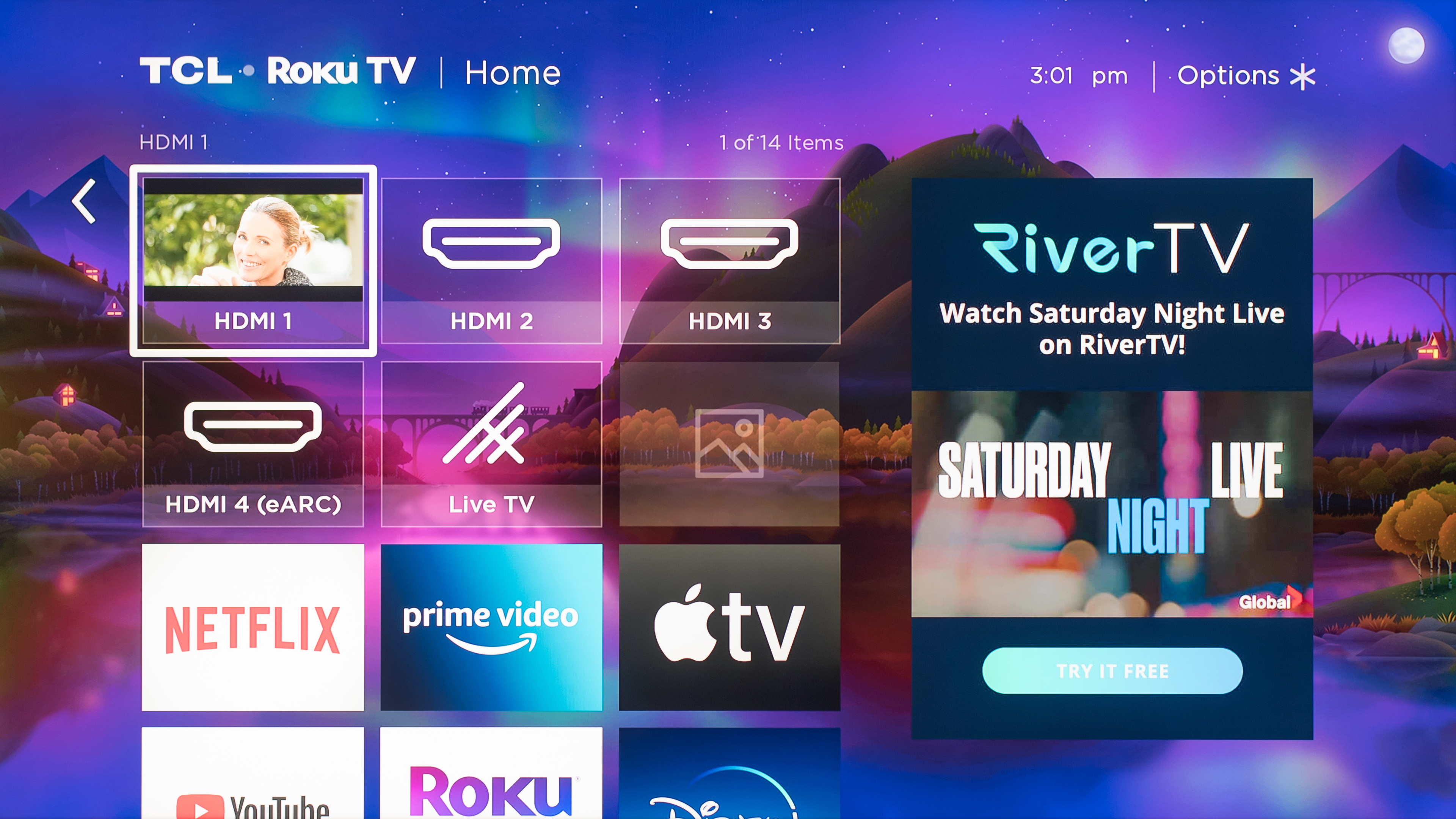 Unfortunately, both Roku and Google TV have large, intrusive ads in the main home menu and throughout the interface, and it's impossible to disable them completely. 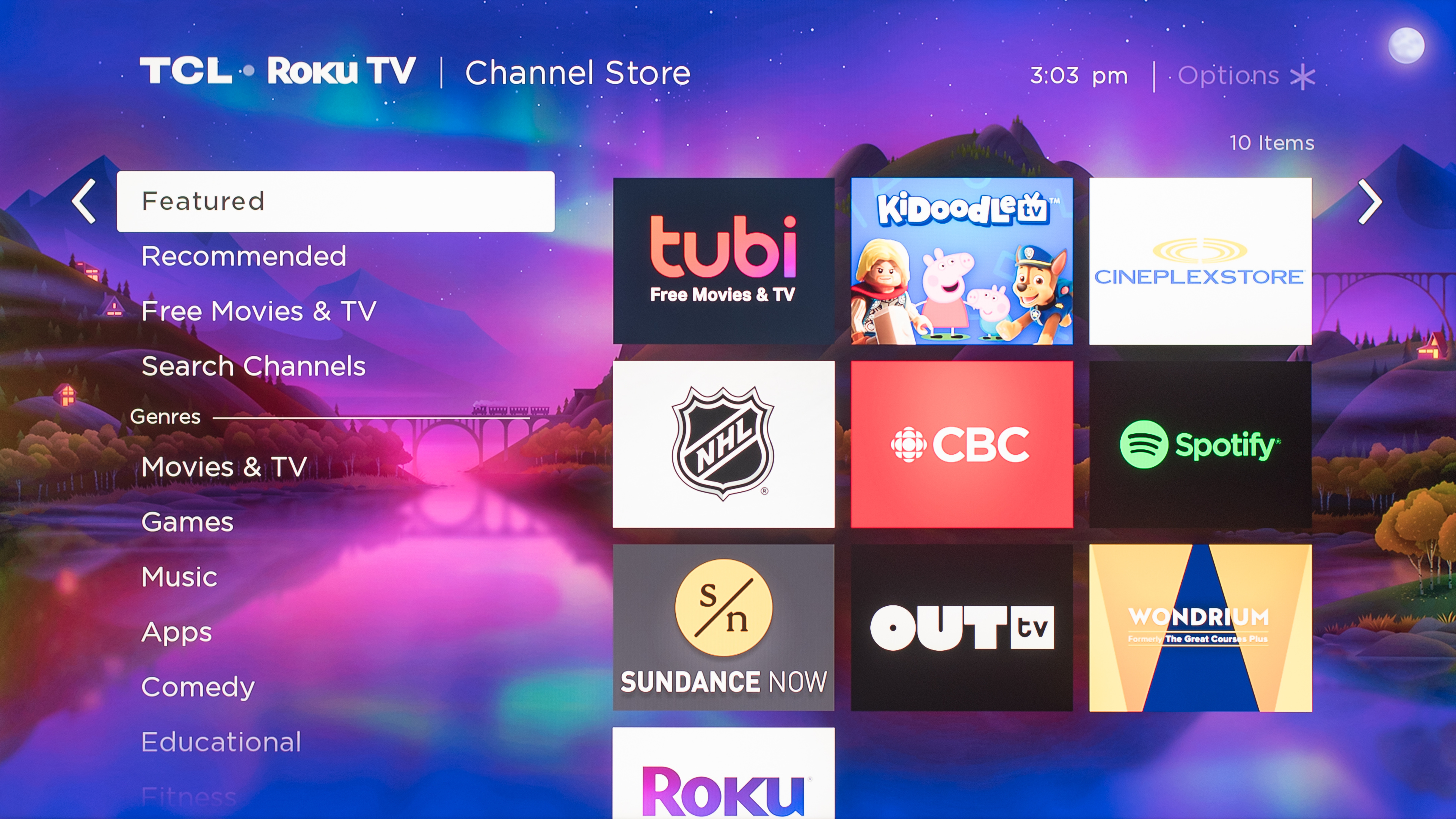 The Roku Channel Store is where you'll find all the apps available on Roku, and there are quite a lot of them. All the major streaming services are available through the store.

As the name suggests, the Google Play Store is the equivalent of Google TV, and it has even more apps available.

This is where Google TV has an advantage because the remote supports voice control, and it's also compatible with other Google devices, so you can easily open apps and stream your favorite shows. Some of TCL's Google models even have a mic built into the TV. 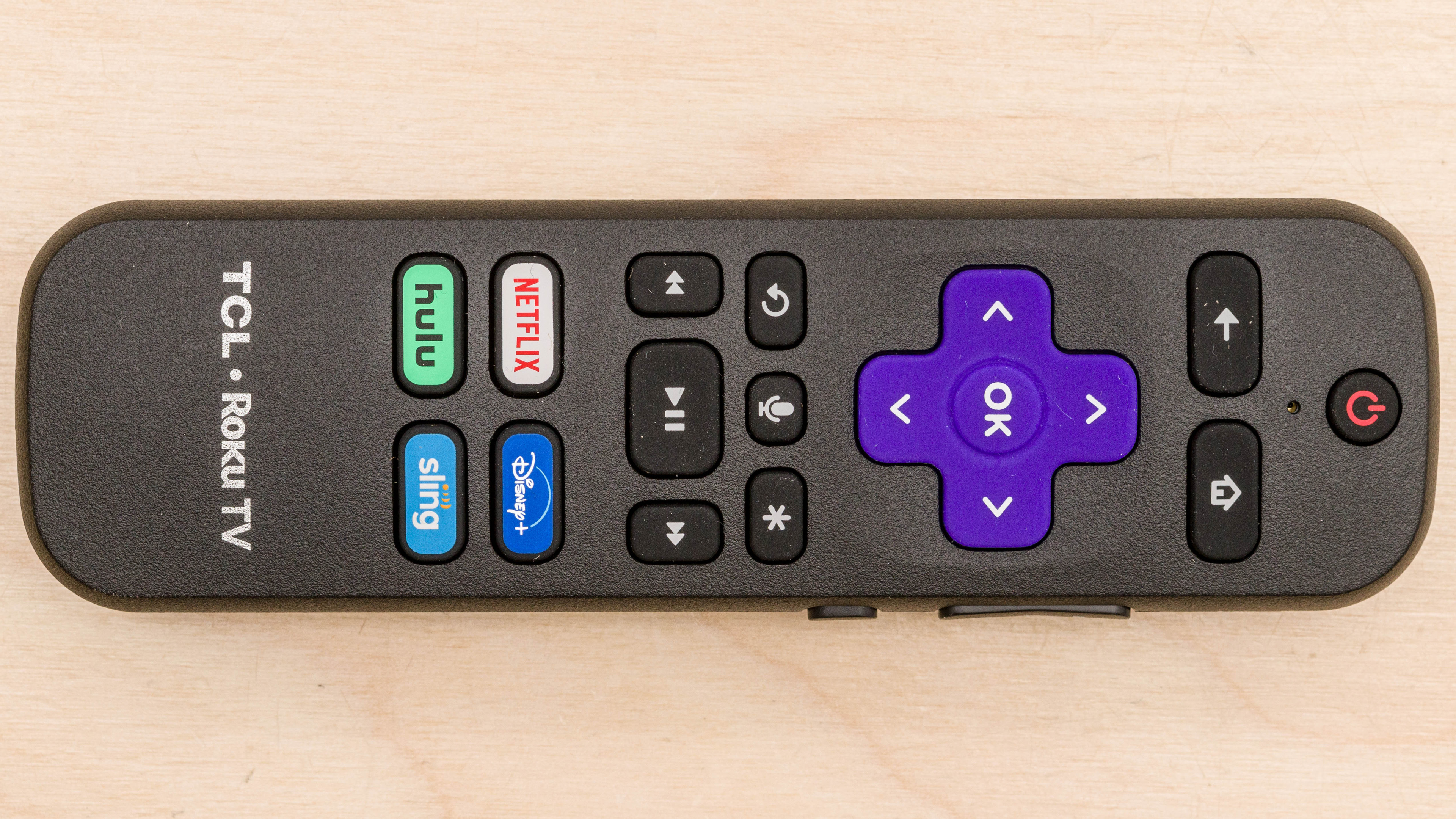 The Roku TVs come with a small remote, which isn’t a bad thing since it's very comfortable and responsive. The TCL branding is impressively minimal, and much like the interface, it’s a carbon copy of the ones you can find with the Roku boxes.

There are different versions of the remote, and the differences are usually with the features. Some have better wireless capabilities, so you don't need to point directly at the TV for it to work. Usually, the higher-end models come with a built-in mic on the remote.

TCL's version of the Google remote is similar as it has quick-access buttons and a circular pad for navigation. One of the best features of the Roku platform is its remote app you can find on both iOS and Android. It can do everything the smart remote can and more, so it's fully featured. All the basic remote controls are available, even powering the TV on and off. You can plug in headphones to your device and listen to the TV privately through the app. Lastly, the app also allows you to access settings that aren't available on the TV, like the calibration settings. Roku is better than Google TV in this regard, mainly because you can do everything you need with the remote with Google TVs.

TCL's lineup is mostly budget-oriented, and they do very well in that area. Their smart platforms rival the very best, and they offer different smart platforms, which isn't something other brands do. Plus, their picture quality has been consistently good across their models. Overall, it's tough to beat them when it comes to budget TVs, and that makes them a pretty safe bet, but if you want a premium TV, you can find options with other brands.