By Ryan Lim
What it is: Different resolutions supported by the TV.
When it matters: PC monitor usage.
Score components:
Score distribution

The supported resolutions test is to determine the resolution and frame rate limitations of a TV. This is helpful for those looking to use the TV as a PC monitor or for playing games on a console that supports 1440p, such as the Xbox One and the Xbox Series S. We also test for chroma 4:4:4 support and whether there are any oddities or bugs that may pop up.

Although 4k TVs are becoming the norm, most content, such as from broadcast TV or cable TV, is still delivered in 720p and 1080p, or in some cases, 480p. This isn't an issue for most people, as these are standard resolutions that have evolved over the years and most modern TVs can display them properly. However, this becomes a problem when using the TV as a PC monitor, where 1440p is a very popular resolution for PC gaming. The reason for its popularity is because it's difficult to maintain a playable frame rate at 4k, even on high-end hardware, and dropping the resolution down to 1440p allows for smoother gameplay without sacrificing too much on image quality. This resolution is also important for console gaming, as the Microsoft Xbox Series S is targeting a 1440p resolution up to a 120 frames per second (fps) gaming experience. A TV that can display 120fps is beneficial for gaming, as a higher frame rate results in a smoother and more responsive experience. As for chroma 4:4:4, this is only important for text clarity when using the TV as a PC monitor; you can read more about it here.

We're often asked how we test for 4k @ 120Hz without a proper HDMI 2.1 source. Typically, when talking about a 4k @ 120Hz signal, it's generally assumed that it includes 10-bit HDR and chroma 4:4:4, which exceeds the 18Gbps bandwidth of HDMI 2.0b. However, since we're only testing the TV's ability to display an image at 4k @ 120Hz, we can save bandwidth by forcing 8-bit color coding and chroma 4:2:0, allowing a 120Hz signal to pass. That said, 4k @ 120Hz isn't officially supported on HDMI 2.0, and it doesn't always work, so it largely depends on each TV's implementation. Also, our testing methodology is likely to change due to the arrival of NVIDIA's RTX 30- series graphics cards, the Sony PlayStation 5, the Microsoft Xbox Series X, and new Radeon graphics cards, all of which have an HDMI 2.1 port.

When a given resolution doesn't work natively, we try using a forced resolution. We do this by creating a custom resolution in the NVIDIA Control Panel, then we change the Timing to 'CVT reduced blank' to reduce bandwidth. If unsuccessful, we then try 'CVT' and 'Automatic'. Finally, we check to see which resolution is active. Note that if the timing is set to 'Automatic', it can sometimes show that the active resolution is 3840 x 2160, even though the signal sent is 1440p.

To perform our tests, we use an Alienware 13 R3 laptop equipped with an NVIDIA GeForce GTX 1050, as it doesn't have 1440p on its list of default resolutions, and the graphics processor doesn't perform any upscaling that could skew results. We also use a Panasonic DMC-FZ200 camera for the 120Hz refresh rate test. The NVIDIA GTX 1050 can't send an 8k signal; 8k TVs will be tested with an NVIDIA RTX 3080 since it has an HDMI 2.1 port.

We begin the test by connecting the PC to the TV using an HDMI cable, then we enable the setting that allows for a full bandwidth signal on the TV. This setting has a different name depending on the brand and/or firmware. For LG, it's called Ultra HD Deep Color, Samsung calls it Input Signal Plus, and Sony calls it HDMI Enhanced Format.

On the computer side, we check that there aren't any custom resolutions that were previously created, then we look at the list of supported resolutions in the NVIDIA Control Panel for the following resolutions:

We test all of the above resolutions to see if there are any oddities. If a particular resolution isn't on the list, we create a custom one.

To test the TV's ability to display chroma 4:4:4, we use the left image shown below, and it has to be displayed at 100% pixel perfect size, with no desktop scaling. You can see an example of what to look for in the picture on the right. In this example, the text looks much clearer on the Samsung KS9000. 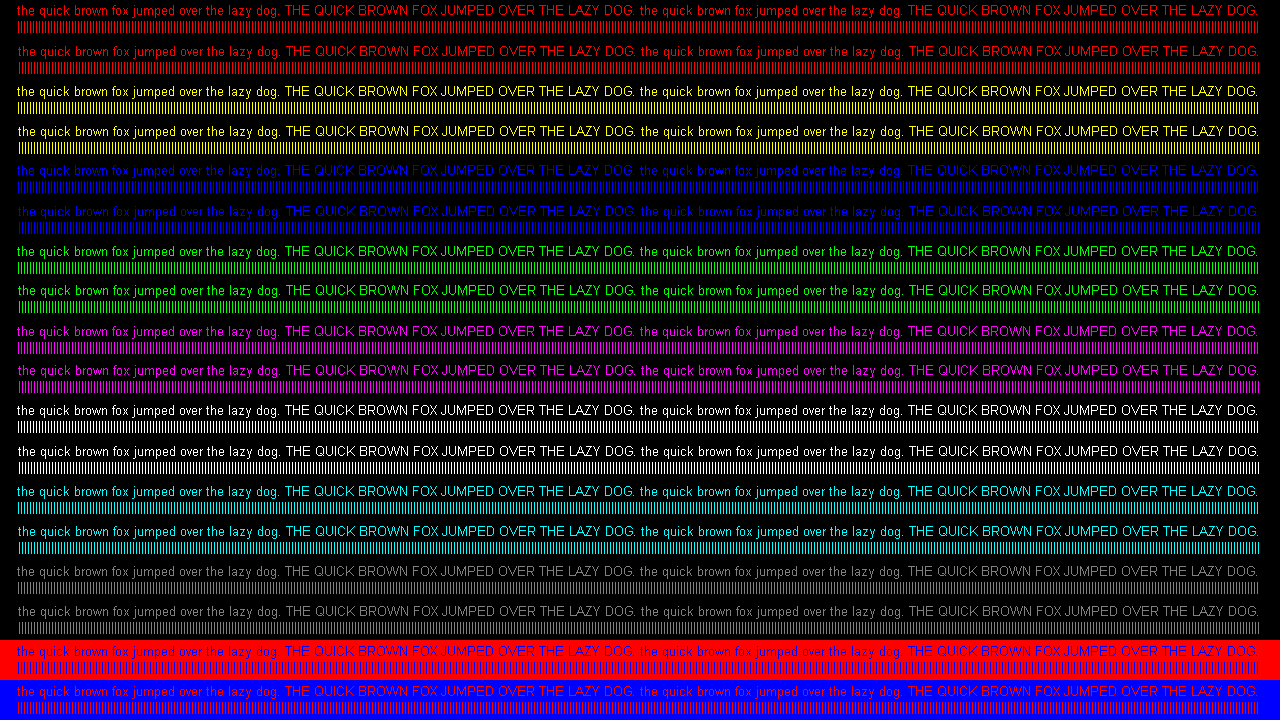 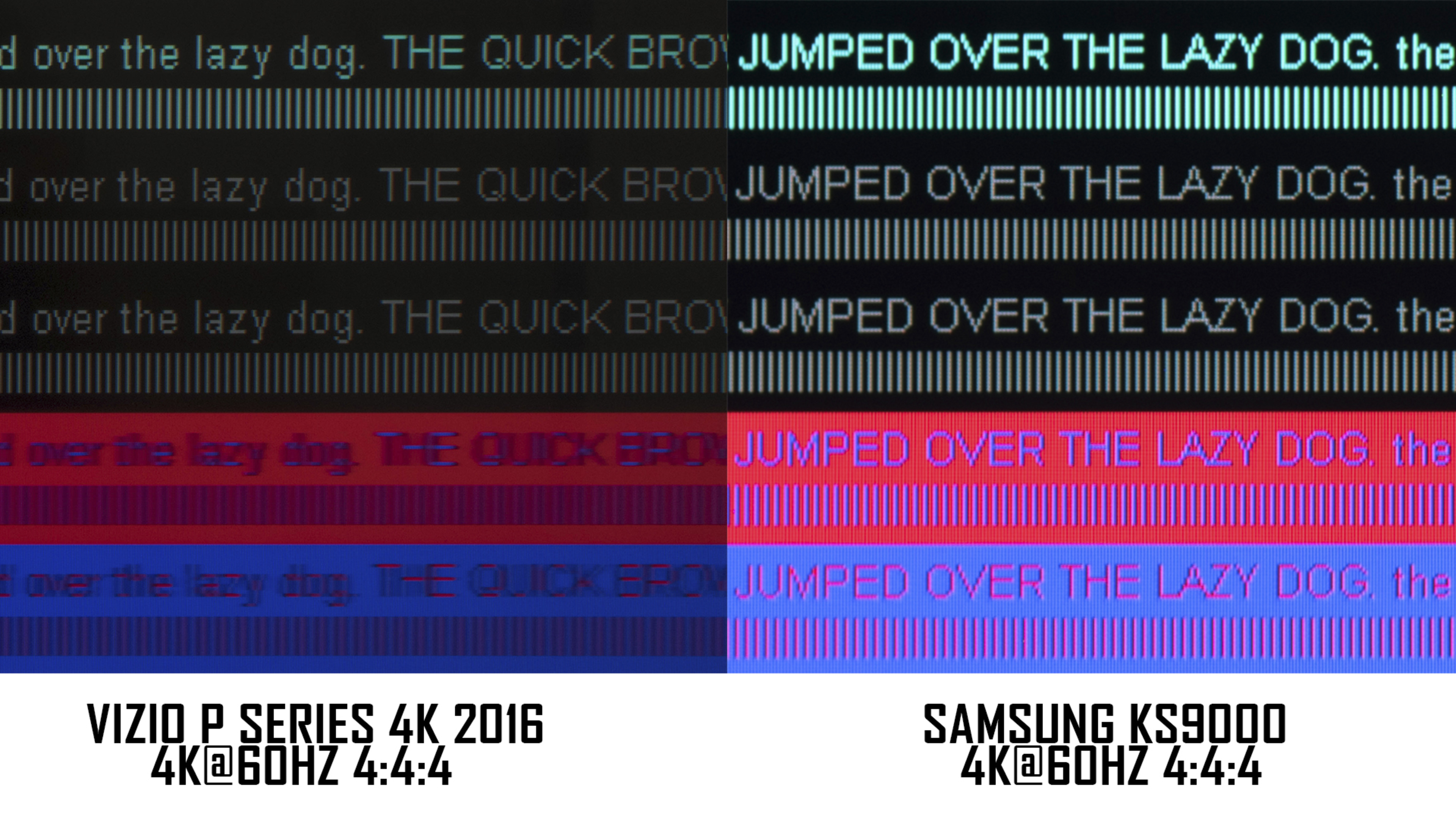 The next test is to see whether the TV can display 120 frames per second. We conduct this test using Blur Busters' 120fps test. Using our high-speed camera, we ensure that all the squares are filled and that it isn't skipping frames. If it does, we check to see if this behavior is also present in 'Game' mode. If it's skipping frames in 'Game' mode, we then take a picture as evidence.

The last test we perform is to see whether the TV has access to the full bandwidth of HDMI 2.0 to accept a 4k @ 60Hz signal with chroma 4:4:4, which is nearly 18Gbps, the maximum bandwidth allowed under HDMI 2.0. To do this, we use the HDFury Linker to send the info frames.

All of our tests are repeated for every HDMI port.

The only adjustment you can make is for the chroma 4:4:4 support. To see if your TV supports it and what you need to do, see here.

There are only a few settings to change for this test. We only enable the setting that allows for a full bandwidth signal on the TV. Samsung calls it Input Signal Plus, LG calls it Ultra HD Deep Color, and Sony calls it HDMI Enhanced Format. Other than that, the other settings are related to Chroma 4:4:4.

The supported resolutions test shows if a TV is capable of displaying various resolutions. This isn't important for most people, as all modern 4k TVs support all the standard resolutions. However, this test shows the TV's limitations for those planning on using the TV as a PC monitor or for console gaming.