Your browser is not supported or outdated so some features of the site might not be available.
Best
Gaming Wireless Wireless Gaming MacBook Pro Mouse Ergonomic Work Logitech FPS Wired Cheap Gaming MMO Razer Trackball Corsair Lightest SteelSeries Claw Grip
260
Mice store-bought and tested, supported by you via insider access, and when you purchase through links on our site, we may earn an affiliate commission.

By Nicholas Di Giovanni
What it is: How long it takes for the mouse's input to be registered by the computer once the mouse click switch is pressed down.
When it matters: When gaming, every delay in your input could impact the outcome of an event in games. A low input latency is an important aspect of competitive gaming.
Score components:
Score distribution

Any gamer needs equipment that helps them achieve victory, like the right computer, monitor, keyboard, and mouse. Even in the world of technology where messages are sent around the world in a matter of seconds, nothing is instantaneous. With PC gaming, each piece of equipment introduces some sort of delay, called latency or lag, from the time you input your action on the keyboard or mouse to when the action appears on the screen. The key to gaming is having the lowest latency possible, and that starts with having a mouse with low click latency.

We measure the click latency using an audio recording of when the mouse button is clicked and when the computer registers the input. Due to the system latency on the computer, this isn't an absolute value, but a relative value that you can compare between mice we've tested. We also measure the latency over different connection types. 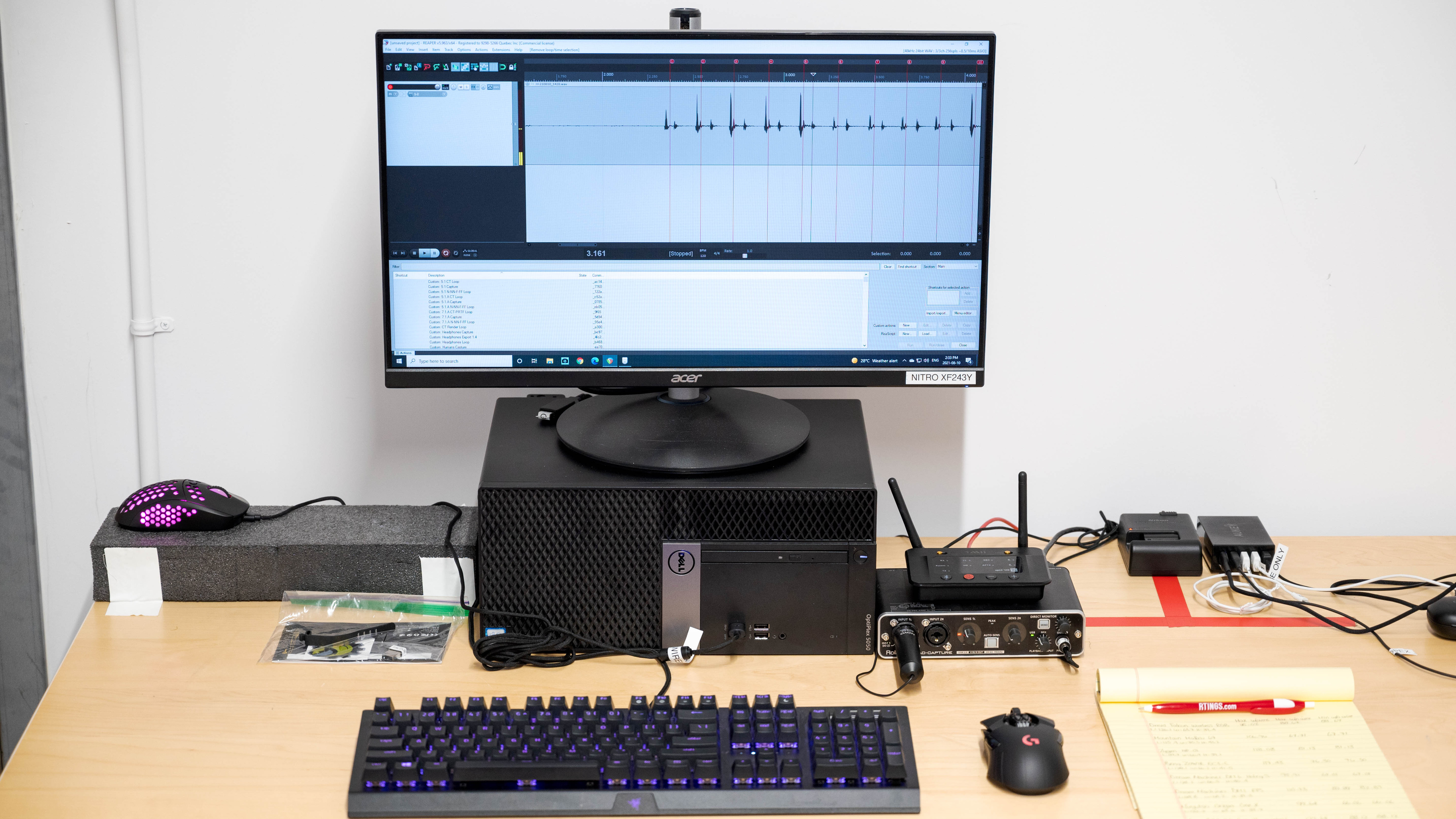 Having a mouse with low click latency is extremely beneficial to gamers. Of course, you also need a computer and a monitor with low input lag, but having a responsive gaming mouse can make the difference between winning and losing. Although most people can't visually or audibly tell the delay between when the mouse is clicked and when the action appears on the screen, a mouse with high latency can make subtle differences in games. Especially in online games, having a low latency mouse can give you an advantage over your opponents if they have mice with high latency, and it can allow you to kill them before you get killed.

The mouse's connection type affects the click latency. Generally, wired mice have the lowest latency and Bluetooth mice have the highest latency. A Bluetooth connection isn't ideal for gaming, but it's still good for office use, and most people won't notice any delay unless the latency is extremely high, at which point it can become annoying to use. Wireless gaming mice that use a USB receiver have become more popular and technology has evolved to greatly reduce the latency, to the point where some wireless options are as good as wired ones.

The way we measure click latency is straightforward, and we use the same desktop computer each time. This computer setup has a Quad-Capture sound card, a microphone, and the Reaper audio workstation program installed. We also connect a default mouse and the mouse in testing to the computer. We use the X-Button Mouse Control program to remap the mouse's buttons, even for mice that have dedicated software.

We connect the microphone to the sound card, which connects to the computer via USB. We then place the mouse on top of a box that has the microphone inside. If the test mouse has any debounce settings in the software, which essentially sets a delay, we set it to the lowest value. We set the polling rate to its maximum; this is how many times per second the computer reads data from the USB, so a polling rate of 1000Hz means the computer reads the data 1000 times per second. Using the X-Button Mouse Control program, we reprogram the right button of the mouse to 'M'. This is because, in Reaper, there's a shortcut with 'M' that places a marker in the timeline of the audio recording.

We turn off the monitor for the actual testing so it doesn't introduce any input lag, start the audio recording, and click the mouse five times. A marker appears on the audio recording for each press; this is when the computer registers the input. Looking at the sound wave, we measure the time difference between the start of the wave—when the mouse was clicked —and where the marker is. This gives us the click latency. We only use an average of the last four clicks because the first click may be slower if the mouse was in sleep mode. We repeat this method for each connection method available on the mouse.

What it is: The latency obtained when connected with a wire. How long it takes for the mouse input to be registered by the computer once the mouse click switch is pressed down.
When it matters: When you plan to game using the mouse with a wire.
Good value: <18 ms
Score distribution

A wired mouse connects directly to the computer, and generally, has the least amount of latency. Some mice, such as the Logitech MX Master 2, have a charging cable, but still use their wireless connection when charging. This means they don't use a wired connection, so we can't measure the click latency.

What it is: The latency obtained when connected via the wireless receiver. How long it takes for the mouse input to be registered by the computer once the mouse click switch is pressed down. If the mouse comes with a receiver extender we are using it and placing the receiver at 20 cm from the mouse.
When it matters: When you plan to game using the mouse receiver.
Good value: <18 ms
Score distribution

Wireless gaming mice use USB receivers, which generally have incredibly low latency, some as low as wired mice. Some mice come with a USB extender to place the receiver closer to the mouse. This is because USB receivers tend to have higher latency the further you move away from it, so it's important to have the receiver as close as possible. If it has an extender, we use it and place it about 20cm away from the mouse for testing.

What it is: The latency obtained when connected via Bluetooth. How long it takes for the mouse input to be registered by the computer once the mouse click switch is pressed down.
When it matters: When you plan to game using the mouse via Bluetooth.
Good value: <18 ms
Score distribution

Using a Bluetooth connection generally results in the highest click latency. This is why some gaming mice don't even have Bluetooth support, and if they do, gamers usually use the USB receiver instead. Bluetooth office mice are versatile as you can also use them with mobile devices. Although they have the highest click latency of the three connection methods we use, it should be good enough that most people won't notice any delay in a desktop environment.

There isn't much that you can do to improve click latency besides using a wired connection when possible. If you still find that there's too much latency, check the debounce and polling rate settings, or check your computer and monitor settings. If you're using the mouse on a TV, you should make sure the TV is in 'Game' mode, which is usually when the input lag is at its lowest.

One major limitation to our testing is the system delay that's introduced by the computer. The final results include this total system delay, so it's not an absolute number. However, we use the same computer setup for every test, so the results are comparable to each other. This means that if a mouse has a latency of 10ms and another has a latency of 15ms, there should always be a 5ms difference between them, even if you're using them on your computer. Although this test isn't perfect, it allows you to know which mice have the lowest latency compared to others.

Most gamers will look for a mouse with the lowest click latency, so they know their actions are registered almost instantly. A mouse with low latency can make the difference between winning and losing. The latency increases depending on the type of connection, so it's best to use wired or wirelessly over its USB receiver for gamers, but even most Bluetooth mice should be good enough for most people.