Your browser is not supported or outdated so some features of the site might not be available.
Best
Gaming Wireless Wireless Gaming Mouse MacBook Pro Ergonomic Logitech Work MMO FPS Wired Cheap Gaming Razer Lightest Trackball Corsair SteelSeries Claw Grip
265
Mice store-bought and tested, supported by you via insider access, and when you purchase through links on our site, we may earn an affiliate commission. 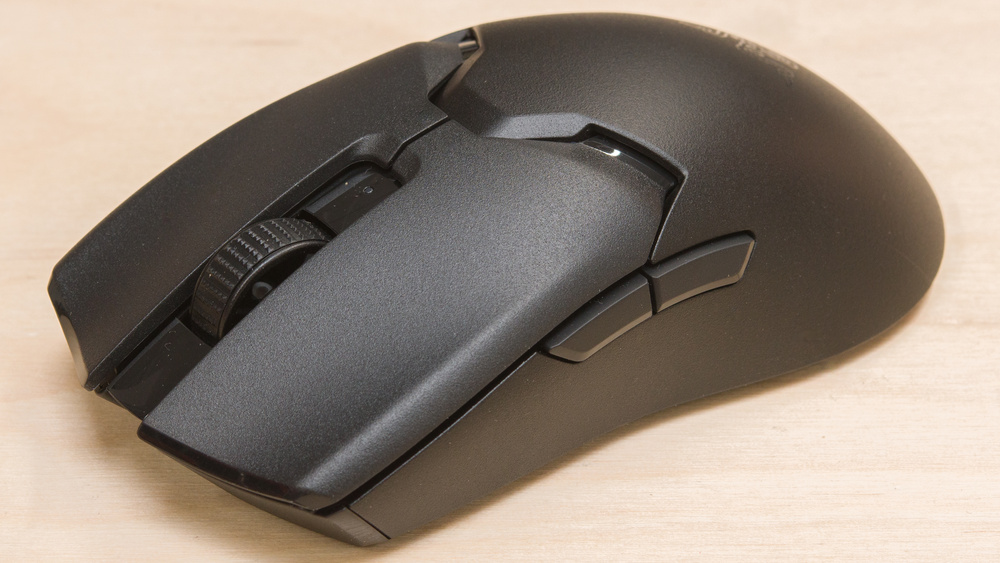 The Razer Viper V2 Pro is an ultra-lightweight, wireless gaming mouse that continues Razer's popular Viper lineup. It has the same symmetrical shape but incorporates major design changes and improvements over the Razer Viper Ultimate. Razer has significantly reduced the weight of this mouse; however, they've accomplished this in part by removing several features of the previous generations, including side grips, RGB lighting, and ambidextrous controls. Besides weight changes, this mouse also has a new Razer Focus Pro 30K sensor and uses a new generation of optical switches. Razer also indicates they've improved battery life and wireless performance.

Though not specifically for this use, the Razer Viper V2 Pro is excellent for office and multimedia use. It connects wirelessly with its USB receiver, and you can reprogram buttons to perform productivity actions and macros using the customization software. Unfortunately, there's no Bluetooth support. Also, the scroll wheel lacks a free-scrolling mode and left/right tilt inputs for horizontal scrolling.

The Razer Viper V2 Pro is a remarkable FPS gaming mouse. It's extremely lightweight and feels very sturdy. It has a comfortable symmetrical shape and outstanding feet that glide very smoothly on mousepads and desks. Performance-wise, it has an extremely wide CPI range, a very low minimum lift-off distance, and exceptionally low click latency.

The Razer Viper V2 Pro is a great mouse for MMO or MOBA gaming, but it doesn't have nearly as many programmable buttons as mice specifically for this genre. That said, it feels very sturdy and has a comfortable symmetrical shape suitable for most hand sizes. It also has exceptional click latency, and you can precisely adjust your CPI in an extremely broad range.

The Razer Viper V2 Pro is an outstanding ultra-lightweight gaming mouse. It's extremely lightweight and feels very sturdy. Performance-wise, it has a very low minimum lift-off distance, an extremely broad CPI range, and the click latency is remarkably low. The feet are also outstanding and glide very smoothly on mousepads and desks.

While it isn't specifically for this use, the Razer Viper V2 Pro is a satisfactory mouse for travel. It feels very sturdy and has a comfortable symmetrical shape. Also, you can connect it wirelessly with its USB receiver. Unfortunately, it lacks a compartment for storing the receiver when not in use and isn't as compact and easy to slip into laptop bags and cases as dedicated travel mice.

The Razer Viper V2 Pro looks very similar to previous versions of this mouse with a fairly subdued aesthetic with some aggressive angles. It's made of matte black textured plastic and has glossy black plastic accents. There's a very small LED light behind the scroll wheel that indicates what CPI setting you're using. There's also a Razer logo on the palm rest, but unlike previous generations, there isn't any RGB lighting. 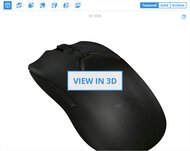 Razer indicates that the white color variant of this mouse is approximately one gram heavier.

The Razer Viper V2 Pro feels very sturdy and well-built, despite being much lighter than previous versions. There aren't any rattling sounds if you shake the mouse and no wobble in the buttons or scroll wheel. That said, you can register side button clicks by squeezing forcefully enough into the side of the mouse, but this isn't an issue during regular use.

—
9.0
Design
Comfort Of Use
Right-handed No
Left-handed No
Ambidextrous Yes
Coating Matte
Finger Rest No

Overall, the Razer Viper V2 Pro has a very comfortable symmetrical shape. It's also low-profile and has a fairly subdued hump towards the middle. The buttons are also well-placed, and the entire plastic body is slightly textured for added grip. Unlike most models in the Viper lineup that are true ambidextrous mice with a pair of buttons on both sides, this mouse only has buttons on the left. This mouse also lacks the rubber side grips found on the previous generation Razer Viper Ultimate, though it comes with a set of adhesive grips. For an alternative option that's just as lightweight but has an ergonomic, right-handed shape, check out the Pulsar Xlite v2 Wireless.

This mouse has a low-profile shape and isn't long enough for using a palm grip if you have large or extra-large hands, as your fingers may drape over the front of the mouse.

If you have extra-large hands, you'll likely need to curl your fingers too sharply to be comfortable using this mouse with a claw grip.

The Razer Viper V2 Pro's low-profile design and length make it a good fit for fingertip grip for almost all hand sizes. However, you may find the scroll wheel difficult to comfortably reach if you have small hands.

Razer advertises that Razer Viper V2 Pro has a battery life of up to 80 hours.

The Razer Viper V2 Pro has a lightweight and flexible paracord-like charging cable that produces minimal drag across desks and doesn't tangle easily.

The Razer Viper V2 Pro has exceptional feet that glide very easily on hard and soft mousepads and directly on desks.

You can reprogram nearly all buttons on the Razer Viper V2 Pro to perform a variety of actions, including profile switching, multimedia controls, windows shortcuts, and keyboard functions. You can also set a Hypershift button which enables a second layer of button assignments. There's an additional button on the bottom of the mouse that isn't programmable. This button toggles the power when held for three seconds and cycles through five customizable CPI settings when pressed and released. The left- and right-click buttons use Razer's new Gen-3 optical switches, rated for 90 million clicks.

The Razer Viper V2 Pro has exceptionally low and very consistent click latency. It delivers an extremely responsive-feeling experience for gaming in any genre and is well-suited for casual and competitive play.

The available polling rate settings on the Razer Viper V2 Pro are 125Hz, 500Hz, and 1000Hz. In addition to the standard sensor adjustment settings found on most gaming mice, this mouse also has a setting called "Asymmetric Cut-Off," which lets you independently configure both the lift-off and landing distance to suit your playstyle. Note that the sensor on this mouse can track on glass surfaces, which is rare for recent mouse releases with optical sensors.

The mouse wheel feels precise and has well-defined steps. It also has a rubberized texture for grip and operates quietly, even at high speeds.

Overall, Razer's Synapse software is very good. It's well laid out and fairly easy to use. You can adjust settings like CPI, lift-off distance, surface calibration, profile calibration, and power settings. However, like many software options from other major manufacturers, this software is criticized for requiring frequent updates and taking up disproportionate system resources. You may find this software frustrating if you prefer more lightweight software options or no software at all.

All default button functions work in both Windows and macOS.

The Razer Viper V2 Pro we tested is the matte black color variant. It's also available in matte white. You can see the label for our unit here.

The Razer Viper V2 Pro is a continuation of Razer's popular Viper lineup. It features several improvements, including a brand new sensor, a new generation of optical switches, and a significantly lighter weight than their previous flagship model, the Razer Viper Ultimate. However, this weight saving comes at the cost of several features that characterized earlier generations of this mouse, including the RGB lighting, rubberized side grips, and an optional charging dock. This mouse only has a pair of side buttons on the left, while the Razer Viper Ultimate and Razer Viper 8KHz featured buttons on either side, making them popular options for left-handed users. Overall, this mouse is a high-performance option that competes directly with similar flagship models like the Logitech G PRO X SUPERLIGHT. However, given its reduced feature set and premium price point, it won't be a perfect fit for everyone.

For more recommendations, see our picks for the best FPS mouse, the best gaming mouse, and the best lightweight mouse. Or, if you're interested in other Razer options, see our article on the best Razer mice.

The Logitech G PRO X SUPERLIGHT and the Razer Viper V2 Pro are high-end wireless gaming mice with symmetrical shapes. The two perform very similarly and weigh virtually the same, though the Razer is marginally lighter. The Razer also has a slightly wider CPI range and a USB-C charging cable, while the Logitech uses an older micro-USB charging cable. On the other hand, the Logitech's shape is more accommodating to a wider range of hand sizes and grip types. Its customization software is also compatible with Windows and macOS, while the Razer software is only compatible with Windows.

The Razer Viper V2 Pro and the Razer Viper Ultimate are very similar mice part of the same lineup. The two mice share the same shape, but the V2 Pro is significantly lighter and has an improved sensor with a wider CPI range. That said, the Ultimate has several features the V2 Pro lacks, including RGB lighting, rubber side grips, and an additional pair of side buttons on the right side.

The Razer Viper V2 Pro and the GLORIOUS Model D are both lightweight gaming mice, but the Razer is lighter and has markedly better performance all-around. It also connects wirelessly and has a symmetrical shape. On the other hand, the GLORIOUS is a wired model with an ergonomic, right-handed shape.

The Razer Viper V2 Pro and the Razer DeathAdder V2 Pro are wireless gaming mice with several noteworthy differences. The Viper V2 Pro has a symmetrical shape and is significantly lighter. It also has a slightly better sensor. On the other hand, the DeathAdder V2 Pro has an ergonomic, right-handed shape. It also has Bluetooth support and a storage compartment for its USB receiver, making it a better option for use on the go.

The Razer Viper Mini and the Razer Viper V2 Pro are similar gaming mice from the same lineup. They share the same overall shape, but the Mini is scaled down to accommodate smaller hand sizes. Despite being a larger mouse that you can connect wirelessly, the V2 Pro is marginally lighter. It also has a much better sensor.

The Razer Viper V2 Pro and the Razer Viper 8KHz are very similar mice from the same lineup. They share the same shape, but the V2 Pro connects wirelessly while the 8KHz is a wired-only mouse. The V2 Pro is also lighter and feels a bit sturdier. That said, while the V2 Pro supports a standard maximum polling rate of 1000hz, the 8KHz supports a maximum polling rate of up to 8000Hz.

The Pulsar Xlite V2 Wireless and the Razer Viper V2 Pro are wireless gaming mice that weigh virtually the same. On one hand, the Razer has a symmetrical shape, somewhat better click latency and sensor performance, and a solid plastic shell without any honeycomb cutouts. On the other hand, the Pulsar has an ergonomic, right-handed shape, and its body has honeycomb cutouts and a minimal bottom plate that contribute to keeping the mouse very lightweight.