By Abigail Roelens
What it is: The time it takes for the keyboard to register a keystroke. The calculation is made by counting frames between the input and the flash on the display. The value is then corrected to account for system and display latency, as well as the key pre-travel time. The results are an average of 12 measurements per connection type. The video shows the fastest connection type supported by the keyboard.
When it matters: When you want a quick and responsive keyboard, either because you're a fast typist or a dedicated gamer.
Score components:
Score distribution

There are many different components in a typical PC gaming setup, and one of the main components you interact with is a keyboard. Latency, in simple terms, is the amount of time it takes to press down a key and have the action appear on your screen. Measuring the latency of a keyboard isn't as straightforward as it seems. Each part of your PC setup introduces its own latency or input lag, causing a small delay between when an action is registered and when it happens on-screen.

We already measure the input lag of monitors, which is the last piece of equipment that introduces lag. Your actions are first registered with either your keyboard or your mouse, so it makes sense to measure the latency of these peripherals on their own. This test, however, focuses on keyboard latency, so you can check out this article to learn how we measure a mouse's click latency. You probably won't notice your keyboard's latency when typing or performing general tasks, as even the worst latency is only marginally detectable to a user. However, when gaming, latency is extremely important. Along with your computer and your monitor, your keyboard contributes to the latency between registering your input and the action being completed in-game. Since it's the first device and the one you initially register your input on, your keyboard should have the lowest latency possible, as this latency will contribute to the overall system latency and impact your in-game movements. While no keyboard is completely free of lag, gaming keyboards are designed to have extremely low latency.

When we test the latency, we check the keyboard's settings using the companion software to ensure that the keyboard is set to its highest possible polling rate and that any latency optimization modes are enabled. The difference these settings make is pretty marginal, and you may not be able to see it with the naked eye, but they do impact the latency of your keyboard.

We use a few different pieces of equipment to test a keyboard's latency, including a Sony RX0 II camera, a computer with an NVIDIA RTX 3080 graphics card, a Dell Alienware AW2521H monitor, a SteelSeries Rival 3 mouse, and a solenoid and plunger system connected to an Arduino Uno microcontroller as part of the setup.

The reason we use these specific materials is that we need a monitor and mouse that's compatible with the NVIDIA Reflex Latency Analyzer program. This program measures the latency between a mouse and a monitor, which we use to get the system latency. Since it can't measure the latency between a keyboard and a monitor, we use the measurements obtained from running a few rounds in the Shooting Range of Valorant to calculate the system latency. Before we run Valorant, we make sure that the "Ultra Low Latency Mode" is enabled in the NVIDIA Control Panel and that "Game Mode" is enabled in Windows, so we get the lowest system latency measurement possible.

We repeat the same process with the keyboard, but this time we set up the Sony RX0 II camera to record the test. We place the plunger above the P key and position the camera, so we see when the key is actuated and when the gun in Valorant fires. The camera records a video as the plunger presses down on the key 12 times. 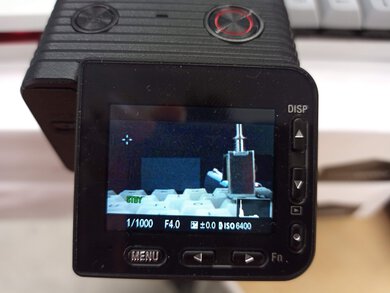 The camera setup to record the latency video.

After the video's been recorded, we go frame-by-frame to analyze when exactly the plunger made contact with the key. We then find the corresponding muzzle flash where the action of the keypress is registered in-game and count the number of frames between these two points. 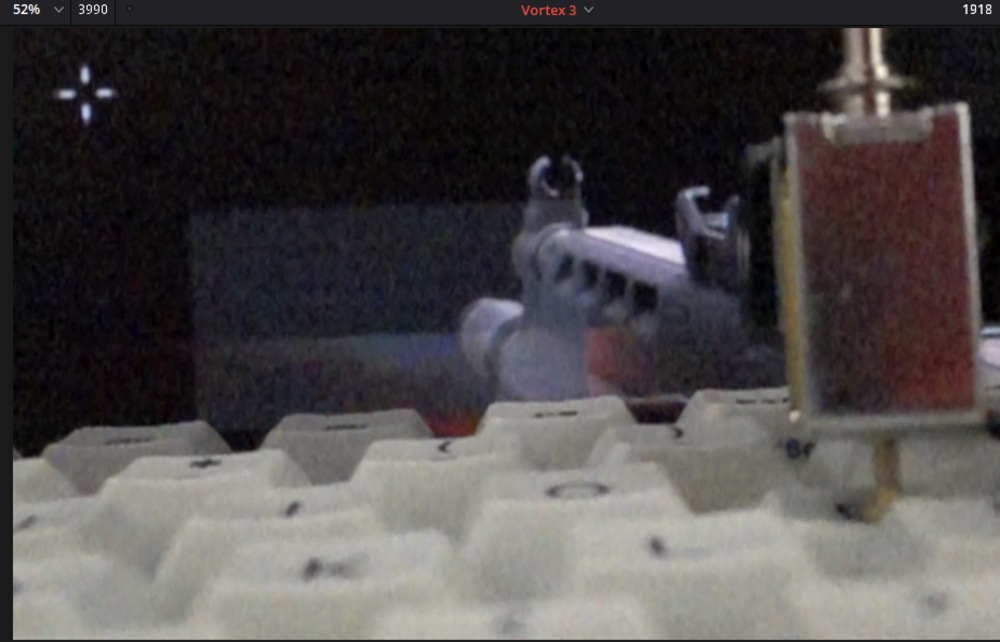 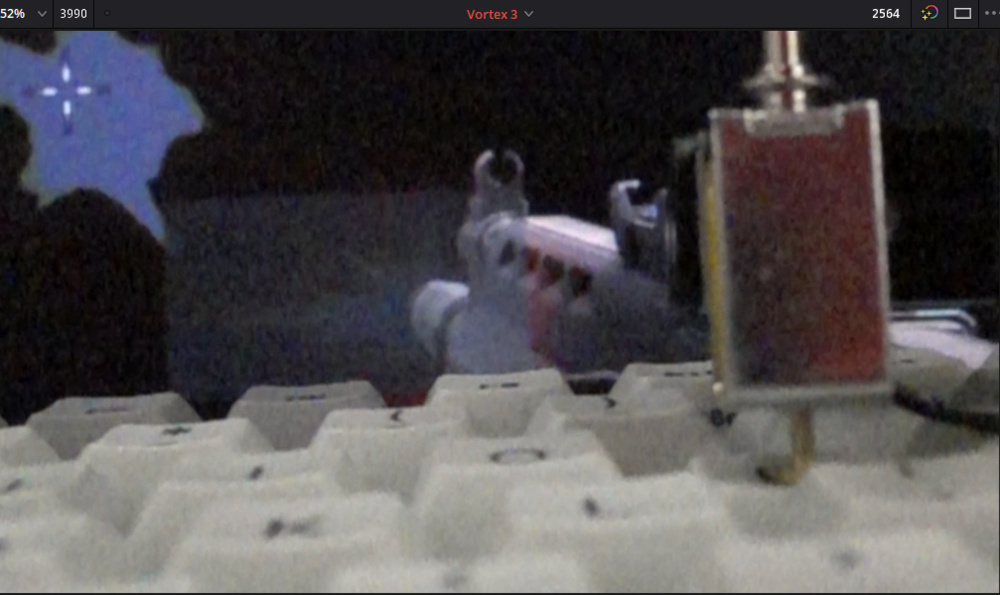 The camera records at 960 frames per second, so we convert the number of frames counted to milliseconds. We then calculate the deviation between the 12 results to ensure there aren't any outliers or problems. Then we discard the two worst results and take an average of the ten best values.

Here's an example of what the math looks like: if we find that a switch's pre-travel distance is 1.5mm, then the key travel time is 1.95ms, based on the speed of the plunger. During our latency test, we calculate that the system latency is around 10ms. When we test the keyboard, after doing 12 runs and dropping the two worst runs, our result for the average latency is 15ms. To get our final latency number for the keyboard, the equation would look something like 15ms (average latency) - 10ms (system latency) - 1.95ms (key travel time) = 3.05ms (latency of just the keyboard).

If the keyboard has multiple connection types, we repeat this process for each of them.

What it is: How long it takes for the keyboard's inputs to be displayed on our test computer monitor using the wired connection.
When it matters: When you intend to use the keyboard wired.
Good value: <4 ms
Score distribution

What it is: How long it takes for the keyboard's inputs to be displayed on our test computer monitor. If it comes with a receiver extender, we use it and place the receiver 20 cm from the keyboard.
When it matters: When you plan to use the keyboard over a wireless connection.
Good value: < 4 ms
Score distribution

Wireless keyboards usually have better latency when connected through a proprietary USB receiver than when connected over Bluetooth. At this point, the wireless latency over a receiver is usually just as low as a wired connection. If a keyboard comes with a receiver extender, we place it about 20cm away during testing.

What it is: How long it takes for the keyboard's inputs to be displayed on our test computer display using the Bluetooth connection.
When it matters: When you intend to use the keyboard over Bluetooth.
Good value: < 20 ms
Score distribution

Generally speaking, you can't do much to change the latency of your keyboard. You can purchase keyboards with higher polling rate settings. Essentially, the higher the polling rate, the more frequently your keyboard sends information to your PC, and the lower your latency becomes as you don't have to wait as long between polling cycles. However, a polling rate of 8000Hz won't impact the latency all that much, as you're only shaving off fractions of a millisecond between the polling cycles. Also, these higher polling rates require a lot of system resources, and some games don't even support them, so it isn't always a viable solution to reducing your latency unless your gaming setup is fairly powerful.

Switching your connection type will likely also reduce the latency, especially if you're moving from a Bluetooth to a wired connection or a connection with a USB receiver. Bluetooth connections usually only support a 125Hz polling rate, so the latency is much higher as the keyboard is sending information much less frequently.

Though, if you still feel like there's too much lag and that it's impacting your gaming experience, there's a good chance that your keyboard isn't the only thing to blame. You can check your PC and Monitor settings and ensure that you're getting the lowest input lag possible. After all, while a keyboard may be the first device in the series that receives the input, it isn't the only device that contributes to lag.

While latency is an important factor for a gaming keyboard, it isn't all that important for day-to-day typing tasks. You likely won't notice a keyboard's latency, even if it scores poorly on our test bench. Having a low latency does benefit you if you're a competitive gamer or if you tend to play rhythm or timing-based games since you want your keypresses to feel as responsive and immediate as possible.