Driven by data, run by a passionate team of engineers, testers, technical writers, developers, and more.
We are hiring!
Cyber Monday deal: The Logitech G915 LIGHTSPEED has dropped by $34 on Amazon.com. See all Keyboard deals. 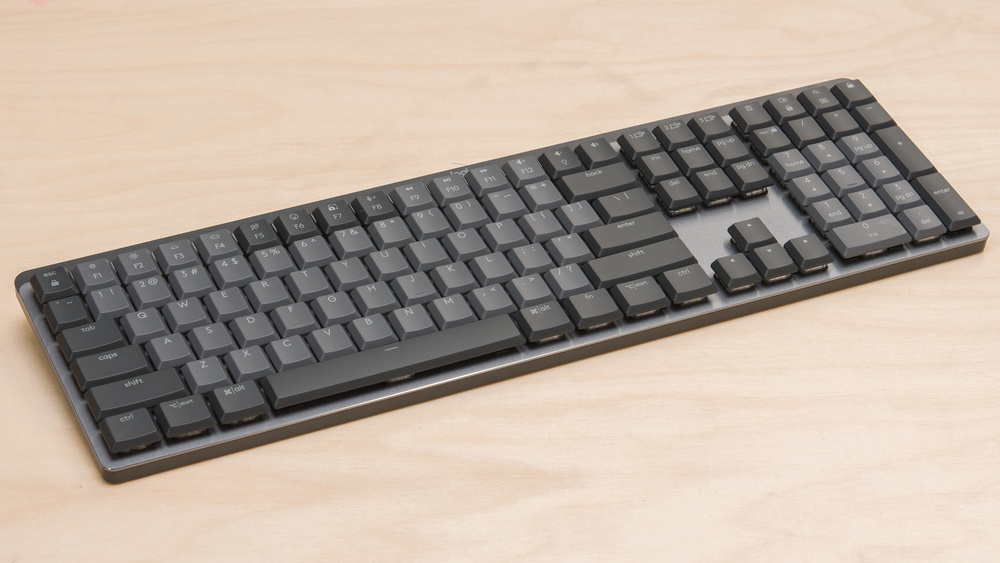 The Logitech MX Mechanical is the first mechanical keyboard released in Logitech's office-focused MX lineup. It's a wireless model that comes with Logitech's BOLT receiver, which is designed for use simultaneously with other select Logitech products, but you can also connect it with Bluetooth. You can choose from Kailh low-profile switches in tactile Brown, clicky Blue, and linear Red, and there's a compact version of this keyboard available called the Logitech MX Mechanical Mini.

Although the Logitech MX Mechanical isn't specifically for gaming, it offers very good performance for this use. Overall, it feels well-built and comfortable, and its white-only backlighting makes the keys easy to read in the dark. Also, the tactile Brown switches have a short pre-travel distance, and keypresses are smooth throughout. However, its latency is only low enough for casual gaming, and you can't program macros as the customization software is pretty limited.

The Logitech MX Mechanical is an adequate keyboard to use with mobile devices. Although it has outstanding wireless versatility and can connect with up to three devices at once, its bulky size makes it inconvenient to carry around.

The Logitech MX Mechanical is a very good keyboard for office use. Thanks to its low profile, it feels comfortable to type on for long periods, even without a wrist rest. The build quality is solid, and with the tactile Brown switches installed, the typing noise is minimal. You can connect it wirelessly with its USB receiver or via Bluetooth, and it pairs with up to three devices. While it's fully compatible with Windows, some buttons don't work as intended on macOS and Linux.

The Logitech MX Mechanical is a good keyboard for programming use. It feels well-built and comfortable to type on for long periods thanks to its low-profile. The typing quality feels great with the tactile Brown switches installed, and the backlighting shines through the legends, meaning they're easy to read in the dark. Also, it can connect with up to three devices at once using Bluetooth. However, you can't program macros, and some buttons don't work as intended on macOS and Linux systems.

The Logitech MX Mechanical is an okay keyboard to use with a home theatre PC. You can connect it wirelessly with Bluetooth or its USB receiver, and it pairs with up to three devices at once. It also has white backlighting, so the keys are visible in the dark. Unfortunately, it doesn't have a trackpad, so you'll have to use another peripheral to navigate on-screen. It also lacks a wheel to control the volume.

The Logitech MX Mechanical comes in three different switch options: tactile Brown, clicky Blue, and linear Red. You can also get a compact version of this keyboard called the Logitech MX Mechanical Mini. We bought and tested the full-size version in the Graphite colorway with tactile Brown switches installed, and you can see the label of our unit here.

The Logitech MX Mechanical is a straightforward wireless keyboard designed for productivity and office use. It's essentially the mechanical version of the popular Logitech MX Keys, but it offers a slightly different typing experience. Typing is louder and can feel a bit softer than the distinct tactile bump found with scissor switches. Also, the keycaps are low-profile but don't have the dip in the middle to help guide your fingers. Overall, it feels similar to the low-profile offerings from companies like Keychron, but with slightly better-feeling keycaps. Unlike the Keychron keyboards, you'll maximize the device and software features if you use the MX Mechanical in a larger Logitech ecosystem with other MX series devices.

If you're interested in more products, check out the recommendations for the best Logitech keyboards, the best wireless keyboards, and the best keyboards for typing.

The NuPhy Air75 and the Logitech MX Mechanical are wireless, low-profile mechanical keyboards but have different features. The NuPhy is more customizable through the software, and it has a hot-swappable PCB, meaning you can swap out the switches. The Logitech is a pre-built option designed for office use, so you're limited in how much you can customize it through the software, and you can't change the switches out.

The Keychron K4 and the Logitech MX Mechanical are both wireless, mechanical productivity boards. However, the K4 will give you a more classic mechanical typing experience as it uses standard switches, while the MX Mechanical feels like a hybrid between a mechanical and scissor-switch keyboard thanks to its low-profile switches.

The Razer Pro Type Ultra and the Logitech MX Mechanical are two wireless mechanical keyboards. However, the Logitech uses low-profile switches and keycaps, which provide a different typing experience from standard mechanical switches like the Razer has. The Razer is also better-suited if you want a multi-purpose board to game and work with as it has much better latency, whereas the Logitech is only suited for productivity tasks.

The Logitech MX Mechanical and the Ducky One 3 have some different features. The Logitech is wireless and suited for the office. It also uses low-profile switches, which offer a different typing experience than standard mechanical switches. On the other hand, the Ducky is wired-only and isn't low profile, so it offers a more traditional typing experience. Also, it's better if you're looking for a multi-purpose keyboard for gaming and office tasks as it has much lower latency.

The Logitech MX Mechanical has excellent build quality. The top plate is aluminum, while the chassis is made of solid plastic, so the board exhibits no flex. The keycaps are ABS plastic with a soft coating that adds extra grip, which is good as ABS keycaps are prone to becoming slick from finger oil over time. The legends are shine-through, meaning you can see the backlighting in the dark. The stabilizers inside offer good stabilization, so there's very little wobble in the larger keys. On the top right of the keyboard, you'll find the charging port and power switch. Along the bottom of the board, there's a long rubber strip that does a good job of keeping it in place, and there are two smaller strips at the top and on each incline foot.

The Logitech MX Mechanical has good ergonomics. As it's a low-profile board, you can use it comfortably without a wrist rest, though Logitech does offer one for purchase if you want. It also has one incline setting should you need the extra angle.

The Logitech MX Mechanical has excellent white-only backlighting. It has a built-in sensor that turns the backlighting on when your hand is near and off when you've gone away from the keyboard to conserve battery power. The key legends are shine-through, meaning you can read your keys in a dark environment. While there are lighting effects available, you can't program or customize any of them.

This keyboard comes with a simple rubber USB-A to USB-C cable.

The Logitech MX Mechanical is extremely versatile in its wireless connectivity options. It comes with Logitech's BOLT receiver, which connects with select Logitech productivity devices, so you only need one receiver for multiple devices. When used with its receiver, you can still pair it with up to two other devices using Bluetooth. Without using its receiver, you can pair it with up to three devices via Bluetooth. You should also note that this keyboard isn't compatible with the Logitech Unifying Receiver and only works with the BOLT receiver. Logitech advertises that the battery lasts up to 15 days when used with the backlighting on and up to 10 months with the backlighting off.

The Logitech MX Mechanical doesn't have many extra features. You can access a number of functions as hotkeys including media controls and screen brightness controls. You can also access certain features and applications through hotkeys like a calculator app, an emoji menu, and a speech-to-text (dictation) feature. Unfortunately, this keyboard isn't macro-programmable. However, you can re-assign select keys to perform several different functions in the customization software.

This Logitech MX Mechanical unit has Kailh Choc V2 Low Profile Brown switches, which have a subtle tactile bump halfway through the keypress. The pre-travel distance is short, but the smoothness of the switch means that the tactile bump doesn't offer a lot of resistance and doesn't require much force to get over. Overall, the keystroke is light and responsive, though this will feel different if you purchase the board with linear Red or clicky Blue switches.

The Logitech MX Mechanical offers a great typing experience. The ABS keycaps have a soft covering that adds a bit of grip and feels nice on the fingertips. The keys themselves are stable, though the larger keys have slightly more wobble; however, it isn't noticeable during use. Due to the flat, low-profile keycaps, the keys feel closer together than standard keyboards, but not enough to feel cramped. The Kailh Choc V2 Low-Profile Brown switches in the unit provide a slight tactile bump that doesn't feel rough or resistant, so the keypress feels smooth throughout. Overall, if you're used to typing on a scissor switch or other low-profile board, this keyboard will provide an enjoyable typing experience with little to no learning curve. If you're coming from a high-profile board, you may notice your typing speed is slightly slower at first as you get used to the low-profile keycaps and switches. You're unlikely to experience any wrist fatigue or finger fatigue during long periods of use.

With the tactile Brown switches installed, typing on this keyboard is quiet. If you buy this keyboard with clicky Blue switches, the typing noise is louder.

The Logitech MX Mechanical has decent latency. It's very well-suited for productivity tasks and even casual gaming, but it isn't suitable for reaction-based or competitive games.

This keyboard uses the Logi Options+ software, which is very similar to Logitech Options but features an updated interface that's clean and simple. You can use the software to create app-specific profiles, so your settings will be different for different applications. Although this keyboard doesn't have onboard memory, you can back up your settings with the Cloud and sync them across devices. Unfortunately, you can't program macros, and your customization is limited to a drop-down list of commands. Also, you can't re-program every key; instead, you're limited to the function row and a portion of the navigational cluster. The keys you can program are highlighted in the image above.

The Logitech MX Mechanical is fully compatible with Windows. While there's software available for Mac, some function keys, like the screen brightness function (F1, F2), may not work if you use a Mac computer with a monitor that isn't fully Mac compatible. For Linux systems, the dictate (F5), emoji (F6), screen grab (F7), and mic mute (F8) functions don't work. On mobile devices running Android or iOS, the emoji button (F6) and Mic Mute (F8) buttons don't work, and the calculator button doesn't work on iOS. iPadOS users should note that similar to iOS, the mic mute (F8) and calculator buttons don't work.