The 3 Best Keychron Keyboards of 2023 Reviews 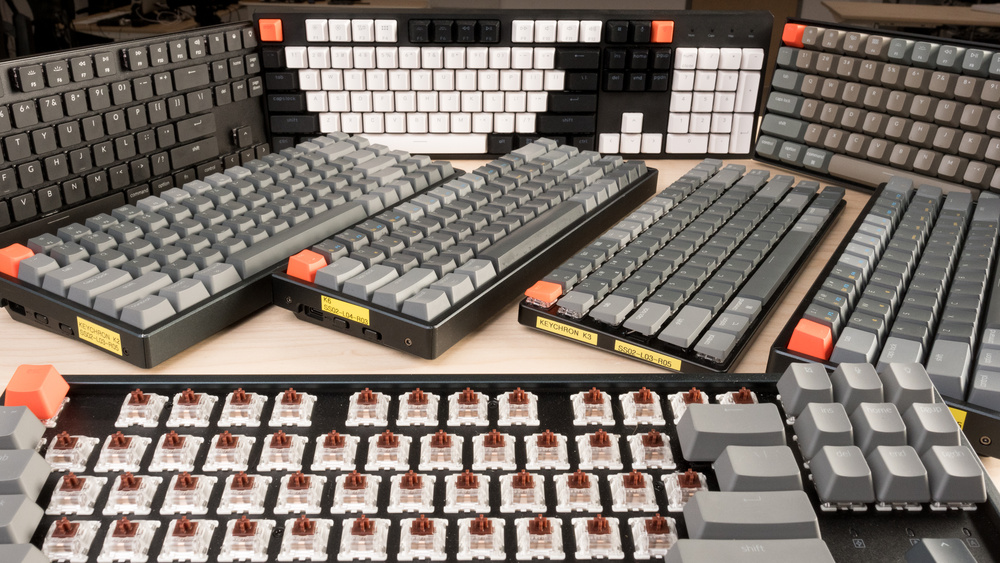 Keychron's mechanical keyboards are best suited for productivity use. They offer a few different lineups, from the premium Q-series to the more budget-friendly, wireless K-series. Within each lineup, you'll find a variety of sizes and configurations, from tiny 40% boards to full-sized 100% units, and they even offer a choice of ANSI and ISO layouts. At the heart of their design, Keychron keyboards are meant to be customizable and give users the freedom to create a typing experience tailored to their own preferences. They often include toolkits to make this customization easier, making them a great gateway into the keyboard hobbyist world without a high entry cost.

We've tested over 185 keyboards, with over 20 of them from Keychron, and below are our picks for the best Keychron keyboards.

Logitech's product range is significantly wider than Keychron's as Logitech makes everything from simple, scissor-switch office models to high-end mechanical gaming keyboards. Logitech's models also offer cross-device compatibility within their larger peripheral system, meaning you can use a single USB receiver for a mouse and a keyboard combination. However, the major difference between brands is that Keychron's office-oriented keyboards are designed for customization, as pretty much every aspect of them can be easily altered.

Ducky and Keychron both make a similar range of products, though Keychron's got an edge since they make wireless keyboards, while Ducky makes wired-only units. Ducky's keyboards are more versatile as they're designed with gaming in mind, so the latency is significantly lower and better suited to competitive gaming. While both brands make keyboards with hot-swappable printed circuit boards, Keychron's units offer more in the way of customization as they have companion software, which Ducky lacks.

Keychron's keyboards are excellent starting points for those looking to get into mechanical keyboards to elevate their study or work environment. Most of their offerings have hot-swappable printed circuit boards that are compatible with most 3-pin and 5-pin switches, so you can get the typing feeling and experience you want. As a bonus, they're one of the few keyboards that offer full compatibility with every desktop operating system, and they even include system-specific keycap sets. Overall, they offer an excellent entry point into the mechanical keyboarding hobby, but even if you aren't interested in customization, you'll still enjoy the outstanding build quality and very satisfying typing experience that Keychrons offer.

Currently, Keychron has a few major lineups, and they're always releasing new keyboards.

Q Series: This lineup features premium wired mechanical keyboards with a gasket-mounted design. They're designed to be fully customizable, including the switches, case foam, top plate, and all internal components. These keyboards also support QMK firmware and VIA software for further customization. All Q-series boards have distinct PBT keycaps with a tapered top and rounded edges, and they come in a variety of sizes and three distinct colorways.

K Series: This lineup features more basic wireless keyboards that connect with Bluetooth. They have a standard tray mount design and are mostly meant to be used out-of-the-box with little modifications. That said, there are some keyboards in this lineup with a hot-swappable variant, meaning you can change out the stock switches. Within this lineup, there are boards of all sizes and some low-profile variants. It's worth noting that this lineup doesn't have companion software and uses gray and orange ABS keycaps.

V Series: This lineup is Keychron's budget version of the Q Series. These keyboards maintain full customization, but instead of an aluminum case, they have a plastic case and a tray-mounted design. There are two main colorway options, a Y2K style translucent plastic case or an opaque black plastic case. These keyboards use PBT keycaps with a tapered top and rounded edges, and they're also wired-only.

C Series: This lineup consists of two basic, wired models. They have a lower build quality than the K series as they're entirely plastic with ABS keycaps. They're wired only and don't allow for much customization as they're meant to be used right out of the box.

Pro Series: Keychron is in the process of re-releasing models across their product lineup as a distinct "Pro" series. Essentially, the Pro series adds wireless connectivity for models that lacked it previously, and it upgrades the keycaps and frame options for models that were using ABS keycaps and plastic frames.

Keychron makes a few different mechanical keyboards geared toward office use. Their models are available in different sizes, and they're highly customizable in switch options, backlighting, connectivity, and even frames. Keychron even includes a switch to change between Windows and macOS support, and they usually include extra keycaps for macOS, so the keyboard fits nicely in your setup. Sadly, there's no dedicated software to reprogram the keys, and latency is likely too high for competitive gamers. However, those looking for mechanical keyboards for typing who don't want to game will be happy with a Keychron keyboard.