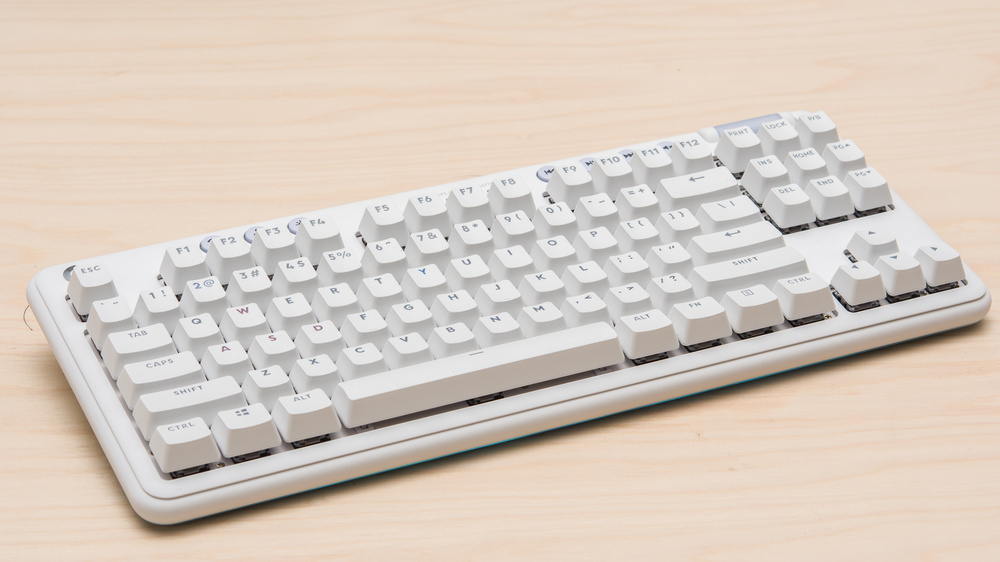 The Logitech G715 is a wireless, TenKeyLess gaming keyboard that's part of Logitech's Aurora lineup, which also includes the Logitech G705 mouse. These products are intended to be inclusive to gamers that may prefer a less aggressive gaming aesthetic. Thus, this keyboard comes in a soft white base colorway with the option to purchase additional top plates and keycaps in different colors to add a bit of personalization to your setup. Overall, its high performance is well-suited for gaming of any genre, from casual farm simulators to fast-paced competitive titles.

The Logitech G715 is a fantastic gaming keyboard. You can choose from three GX mechanical switch types at checkout, and regardless of which you choose, they're all well-suited for gaming. Its latency is extremely low, making it well-suited for any genre of game you want to play. Also, its build quality feels premium, and it's very comfortable to use for long durations thanks to the included wrist rest that adds great ergonomic support. Plus, the Logitech G HUB software allows for thorough customization of the RGB backlighting, though macro programming is limited only to the F1-F12 keys.

The Logitech G715 is a passable keyboard for mobile device or tablet use. You can connect it with Bluetooth, but only with one device at once, and regardless of what operating system your device uses, all keys work as intended. Unfortunately, despite its TenKeyLess size, it's still too big to be conveniently portable, so you'd likely want an even more compact size.

Although not designed specifically for this use, the Logitech G715 is a great office keyboard. Thanks to its included cloud-shaped wrist rest and two incline settings, it feels comfortable to type on for long periods. Its high build quality with double-shot PBT keycaps feels nice and premium. It's also pretty quiet to use, though the noise levels will change depending on what switches you spring for. The G HUB companion software is available on both Windows and macOS, but you can only program the F1-F12 keys, which may be a bit limiting if you tend to use macros or customized key settings for work.

The Logitech G715 is a very good keyboard for programming. The TenKeyLess size doesn't take up much room on a desk, and it feels very well-built with high-quality PBT keycaps. It's also very comfortable thanks to its included cloud-shaped wrist rest and two incline settings. Unfortunately, it doesn't support multi-device pairing through Bluetooth, though you can use it with two devices at once with a combination of a Bluetooth connection and a connection with its USB receiver. Also, you can only program macros to the F1-F12 keys, which is fairly limiting.

The Logitech G715 is a decent keyboard to use in a home theatre PC setup since it's wireless and can easily connect to your HTPC or Smart TV with Bluetooth or a USB receiver. It also has dedicated media keys and a volume wheel to make navigating through on-screen media easier. That said, it does lack a trackpad for on-screen cursor navigation, so you'll have to use a remote or other peripheral. Otherwise, it's a solidly built unit with full RGB backlighting and shine-through keycaps, so the legends are easy to read in the dark.

The Logitech G715 comes in one base colorway, White Mist, and three switch options: GX Red Linear, GX Blue Clicky, and GX Brown Tactile. There are also a few add-on items, like a removable colored top plate or differently colored PBT keycaps. There's also a wired-only version of the keyboard, called the Logitech G713. We bought and tested the base unit of the G715 without add-ons with the GX Brown Tactile switches, and you can see the label of our unit here.

The Logitech G715 is a wireless keyboard that's part of Logitech's Aurora lineup of products, which includes a wireless gaming mouse, the Logitech G705. These products have a soft white aesthetic with the option of adding a splash of color by purchasing separate accessories like a top plate or carrying case. However, this is where the customizability ends, as this keyboard isn't hot-swappable, like many other options hitting the gaming market. Instead, you have your choice of GX switches in the usual offerings of clicky Blue, linear Red, and tactile Brown. These switches have a short pre-travel and decently light actuation force as they're designed for gaming use, but they feel a bit scratchier than Gateron or Cherry switches. Notably, this keyboard's latency is extremely low and only a couple of milliseconds higher than Logitech's other high-end gaming options like the Logitech G PRO X Keyboard or the Logitech G915 LIGHTSPEED, making it well-suited for gaming.

The Logitech G915 LIGHTSPEED and the Logitech G715 are two high-end gaming keyboards with notable differences. The G915 is a full-size keyboard that uses low-profile GL switches and keycaps, which offer a shorter pre-travel distance and better ergonomics so keypresses feel more sensitive. The G915 also has slightly better latency, though the difference is only a few milliseconds, so you won't notice it. On the other hand, the G715 is a TenKeyLess keyboard that gives you more space on your desk for mouse movements, and it uses standard height GX switches, so it feels more like a typical mechanical keyboard. It also includes a wrist rest for added support.

The Logitech G PRO X Keyboard and the Logitech G715 are both premium, TenKeyLess gaming keyboards from Logitech. They have a few differences, the most notable is that the G715 is wireless whereas the G PRO X is wired-only. Otherwise, they perform fairly similarly, though the G715 comes with an included wrist rest and has dedicated media keys and volume control, which the G PRO X lacks.

The SteelSeries Apex 7 TKL and the Logitech G715 are both TenKeyLess gaming keyboards, but the Logitech is better-suited for gaming as its switches have a shorter pre-travel distance and its latency is significantly lower. On the other hand, if you tend to use macros frequently while you game or work, the SteelSeries offers more macro programmability as you can program them directly onboard and each key is programmable whereas only the F1-F12 keys are programmable on the Logitech.

The Razer Huntsman Tournament Edition and the Logitech G715 are both high-performing TenKeyLess keyboards with some notable differences. The Logitech is a wireless unit that comes with your choice of GX mechanical switches whereas the Razer is a wired-only unit that uses Razer's optical linear switches that have a much shorter pre-travel and are significantly lighter to press, so they feel more sensitive. That said, if you're strictly gaming, the Razer is a better choice as its latency is also slightly lower, but if you're looking for one keyboard to use for both work and play, the Logitech is much more versatile.

The Logitech G715 has a TenKeyLess design that frees up extra space on your desk for mouse movements while gaming.

The Logitech G715 has a great build quality. Its plastic chassis is very solid and exhibits minimal flex, and the metal top plate has no flex. The keycaps are made of double-shot PBT plastic, and the legends are shine-through to allow the RGB lighting to be visible. Underneath the board, the six rubber feet do a good job of keeping the board in place, and there's a storage compartment for its USB receiver. Unfortunately, some of the modifier keys lack stabilizers altogether and wobble very noticeable during use.

This keyboard also has a plastic modular plate that covers the top plate. Logitech offers this top plate in three different colors for some personalization. It attaches using a series of magnets, so it's easy to remove and replace, but it does feel a bit flimsy.

The Logitech G715 has good ergonomics thanks to the two incline settings and included wrist rest. The cloud-shaped wrist rest has a fake leather coating, so it adds a nice grip and feels pretty plushy. It doesn't attach directly to the board, so you can place it wherever feels the most comfortable.

The Logitech G715 has individually-lit keys with full RGB backlighting that's customizable on a per-key basis. There's also an LED strip around the frame of the keyboard that provides an underglow effect, and you can also program this strip in the software. Unfortunately, the color mixing isn't great as the keyboard displays pure white with a strong blue hue.

The Logitech G715 includes a basic rubber USB-A to USB-C charging cable that retains kinks from the packaging.

The Logitech G715 has good wireless versatility. You can connect it with one device using Bluetooth and one device using its USB receiver. Logitech advertises a battery life of between 25 and 30 hours with the backlighting on full brightness, though this is subject to change depending on your usage.

The Logitech G715 has a few extra features. Along the top of the keyboard, there are dedicated media keys and a volume knob to easily control your media. There's also a 'Game Mode' toggle to disable the Windows key, but you can alter this function to disable any key you want using the companion software.

The Logitech G715 uses Logitech's proprietary GX switches and comes with your choice of Brown Tactile, Blue Clicky, and Red Linear switches. The Brown Tactile switches have a short pre-travel distance and an operating force that feels fairly light. As these switches aren't pre-lubed, they do feel a bit scratchy.

The Logitech G715 offers a great overall typing experience. The PBT keycaps feel really nice to type on, and the larger modifier keys, like the spacebar and enter, feel very stable. The smaller modifier keys, like ALT, TAB, and CTRL, for example, lack stabilizers entirely, so they have some very noticeable wobble and rattle a bit when pressed. The keys are well-spaced, and thanks to the included wrist rest, you're well-supported while you type, meaning you won't feel wrist fatigue. You also won't feel finger fatigue as the switches are pretty light to press, and the tactile bump doesn't take too much force to get over. However, the switches do feel a bit scratchy, so if you want a smoother typing experience, you can add a bit of lube.

The Logitech G715 with the GX Brown Tactile switches is fairly quiet to type on. Since the modifier keys lack stabilizers, there's a bit of extra rattle during use, but it isn't too distracting.

The Logitech G715 has outstanding latency when connected in wired mode or with its USB receiver. It's well-suited to handle any gaming genre, and you won't notice a delay while gaming.

The Logitech G715 uses Logitech G HUB software for customization. You can remap keys, program macros to the F1-F12 keys, and assign a G-Shift button to enable another layer of programming. There's also a feature to set the "Game Mode" to disable keys other than the Windows key, and you can fully customize the RGB lighting. These customized settings can be saved to the keyboard's onboard memory and accessed on systems that don't have the G HUB software installed.

There weren't any software issues during testing, but many users online have reported various problems trying to use the Logitech G HUB software, including but not limited to startup issues, freezing, and connection issues with some devices. If you'd like to share your experience using Logitech G HUB with this keyboard, feel free to leave a comment in the discussions.