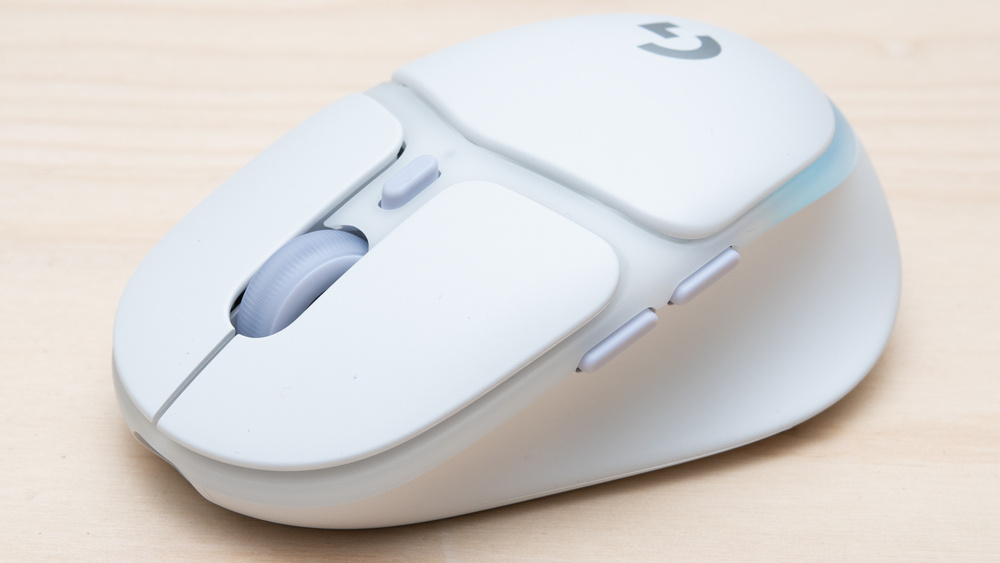 The Logitech G705 is a wireless gaming mouse that's part of the Logitech Aurora lineup. As a whole lineup, these products are intended to be more inclusive of gamers who may want a different style than the usual black and aggressive-looking gaming peripherals. Notably, the G705 is designed for use with small hands.

Although not designed for this use, the Logitech G705 is a very good mouse for office use. It feels very comfortable to use thanks to its right-handed shape with a thumb rest, and it feels very well-built. You can connect it with up to two devices at once, one with Bluetooth and one with its USB receiver. Unfortunately, its scroll wheel doesn't unlock for free scrolling, and the scroll wheel doesn't have L/R tilt inputs.

The Logitech G705 is an amazing mouse for FPS games. It feels well-built and comfortable to use thanks to its ergonomic, right-handed shape. Performance-wise, it offers great CPI customization that's accurate and consistent, and it has outstanding click latency, so games feel responsive. As its a wireless mouse, you don't have to worry about a cable causing drag, and its feet glide smoothly on mousepads and desks. Unfortunately, if you have hands on the larger side, you're limited to using this mouse with a fingertip grip as the mouse is best suited for smaller sized hands.

The Logitech G705 is a great mouse for MMO gaming, though it isn't designed for this use. It has outstanding click latency, so games feel responsive, and its CPI range and accuracy are also excellent. Overall, it feels well-built and comfortable, and you can easily make adjustments using the companion software, which is available on both Windows and macOS. Unfortunately, it doesn't have nearly as many inputs as dedicated MMO mice, and it's best-suited for small or medium-sized hands.

The Logitech G705 is an excellent mouse for use while travelling. It's fairly portable thanks to its small footprint and wireless capabilities, and it has an internal storage compartment for its USB receiver, meaning you won't lose it. Overall, it feels well-built and sturdy. Plus, it has on-board memory, so you can save your customized settings to the mouse and use them across devices.

The Logitech G705 only comes in one colorway: White Mist. As there are no other variants available, this is the version we bought and tested. You can see the label of our unit here.

The Logitech G705 is a wireless gaming mouse designed for use with smaller hands. As it's part of Logitech's Aurora lineup, it's targeted toward a niche of gamers that don't want an aggressive "gamer aesthetic" consisting of sharp angles and black plastic materials. Instead, this mouse has a soft pastel aesthetic with frosted plastic accents, so the RGB backlighting also looks softer. The most notable aspect of this mouse is its small size. While many smaller mice are designed for travel and have a symmetrical shape, this mouse has an ergonomic, right-handed shape and is intended primarily as a gaming mouse, though its size and ability to store the USB receiver lend themselves nicely for travel.

If you're interested in other options, check out our recommendations for the best wireless gaming mice, the best gaming mice, and the best Logitech mice.

The Logitech G305 LIGHTSPEED is a wireless gaming mouse with an egg-like shape that's best suited for a fingertip grip with any hand size, while the Logitech G705's shape is better suited for right-handed users with smaller hands. Since the G705 is a more premium mouse, it has more features such as Bluetooth connectivity, a rechargeable battery, RGB lighting, and better quality feet. That said, performance-wise, both mice perform similarly well.

The Logitech G705 is a right-handed wireless gaming mouse designed for use with small hands, while the Logitech G PRO X SUPERLIGHT is a symmetrical wireless gaming mouse designed for use with a wide range of hand sizes and grip types. The G PRO X SUPERLIGHT offers one of the best sensors currently on the market, so it performs remarkably well for gaming. The G705 is also an incredible gaming mouse, and it offers a more stylized aesthetic with pastel accents and RGB backlighting.

The Logitech G703 LIGHTSPEED with HERO Sensor and the Logitech G705 are both wireless gaming mice, but they have some notable differences. The G705 is a fairly small mouse, so it's best suited for smaller hands, while the G703 is a larger and bulkier mouse that small hands may find too large in certain grip types. Also, the G705 offers Bluetooth connectivity, better feet, and more RGB zones, as it's a more premium mouse than the G703.

The Logitech G705 is a wireless, right-handed gaming mouse designed for small hands, while the Logitech G203 LIGHTSYNC is a wired-only, symmetrically shaped gaming mouse that's well-suited for use with a fingertip grip with all hand sizes. Since the G705 is a higher-end mouse, it has more features like onboard memory, wireless versatility, and higher-quality feet. Performance-wise, though, both mice perform equally well.

The GLORIOUS Model D- Wireless and the Logitech G705 are both right-handed wireless gaming mice designed for small hands, but they have some notable differences. The GLORIOUS has honeycomb cutouts on its body to further reduce the weight and a fairly aggressive gamer aesthetic. On the other hand, the Logitech falls squarely at a decent weight as it isn't ultra-light or very heavy, and its aesthetic consists of much softer edges with a pastel color scheme.

The Logitech G705 has a soft-edged aesthetic that differs from traditional black and sharp-edged gaming mice. Instead, this mouse has a white body with light lavender-colored accents for the buttons and scroll wheel. Around the buttons and the palm rest there's a frosted, translucent plastic accent. The three RGB lighting zones are in the back part of this translucent part, and light up with pastel preset colors. Since the RGB zones are covered by this frosted plastic, they lose saturation and always have a pastel look. 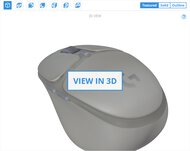 The Logitech G705 has very good portability thanks to its small footprint and wireless capabilities. There's also a storage compartment for its USB receiver under the palm rest panel.

The Logitech G705 has great build quality. The body is made of solid plastic that doesn't flex or wobble anywhere. While the back palm rest panel is magnetically detachable, it stays firmly in place even if you shake or squeeze the mouse though it can flex inwards if you press hard enough. This mouse does have a few minor issues. For example, the scroll wheel tends to rattle when the mouse is shaken, and the bottom panel flexes and creates gaps if you apply enough pressure. However, these issues aren't likely to appear during regular use.

This mouse has a decent weight. You can lower it by 3.75g by removing the back cover if you want to, but this does impact the ergonomics and comfort of using the mouse.

The Logitech G705 is great for right-handed users with smaller hands. It has a slight thumb rest that's pretty comfortable and allows for easy access to the two side buttons. The shape is best suited for a palm grip or claw grip. As it's designed to be inclusive of gamers with smaller hands, if you have larger hands, you'll find the pinky placement is a bit awkward.

If you have large or extra-large-sized hands, you'll find the mouse too small to use comfortably with a palm grip.

If you have large or extra-large-sized hands, you'll find the mouse too short, so you'll have to curl your fingers uncomfortably to use this mouse with a claw grip.

If you have extra large hands, you'll find this mouse too small to use comfortably with a fingertip grip.

The Logitech G705 is a wireless mouse that connects with a USB receiver or over Bluetooth. There's a button on the bottom of the mouse to switch between connection types. It's advertised to have a battery life of up to 40 hours, though this fluctuates depending on your usage. You can also use it while it charges in a "wired mode."

The Logitech G705 comes with a basic rubber USB-A to USB-C charging cable. It isn't very flexible and retains kinks from the packaging.

The Logitech G705 has excellent feet. They offer a smooth gliding experience on both desks and mousepads.

The Logitech G705 has a decent number of buttons. There are two buttons above the thumb rest and a CPI button behind the scroll wheel. You can reprogram all of these buttons in the companion software. There's a connection switching button on the bottom of the mouse to change between USB and Bluetooth connection types, but you can't reprogram this. In the companion software, you can assign a "G-Shift" button, which enables a second layer of commands for more customization.

The Logitech G705 has a fairly standard scroll wheel. It feels soft to use with light notches for a smooth scrolling experience. The rubber coating provides a good grip while you scroll.

The Logitech G705 uses Logitech's G HUB software for customization. This software allows you to remap buttons, customize the RGB backlighting, and assign a G-Shift button to enable a secondary layer of commands when pressed. It also prompts you with a tutorial when you first plug in the device, which is nice if you're unfamiliar with companion software.

While no software issues were present during testing, many users online have reported various problems with Logitech's G HUB software, including but not limited to startup issues, freezing, and connection issues with some devices. If you'd like to share your experience using Logitech G HUB with this mouse, feel free to leave a comment in the discussions.

The Logitech G705 is fully compatible with both Windows and macOS.