By Nicholas Di Giovanni
What it is: Delay between input and on-screen reaction.
When it matters: General use of the mouse and gaming.
Score components:
Score distribution

Input lag on a monitor is the time it takes the monitor to display an image on the screen from when it receives the signal. Most monitors have low enough input lag that you won't notice any delay during regular desktop use, but it's even more important for competitive gamers to achieve the lowest input lag possible.

Since most of our time using a PC consists of clicking through the user interface or typing, you need to have low input lag for a responsive desktop experience. If you have high input lag, you'll notice a delay from the time you type something on your keyboard or when you move your mouse to when it appears on the screen; this can ruin the user experience.

For gamers, low input lag is even more important because it can be the difference between winning and losing in games. A monitor's input lag isn't the only factor in the total amount of input lag because there's also delay caused by your keyboard/mouse, PC, and internet connection. However, having a monitor with low input lag is one of the first steps in ensuring you get a responsive gaming experience.

How We Measure Input Lag

Let's start by explaining how we measure the input lag. In our tests, we use a dedicated photodiode device we've designed just for this purpose, which flashes a white square on the screen and records the time it takes for the image to appear in its sensor. However, it's not just using one measurement, as we record multiple measurements and take an average of them, and this way, outliers aren't included in the measurement either.

We place the photodiode tool in the middle of the screen so it reads the flashing white square when it's displayed in the middle. Since monitors refresh the screen progressively from top to bottom, any new image reaches the center of the screen in the middle of the refresh rate cycle. It means that if a monitor has a refresh rate of 144Hz or 144 times per second, then a new image appears every 6.94 ms, but if we're calculating the input lag at the center, it only takes 3.47 ms for the white square to appear. Any 144Hz monitor has a minimum input lag of 3.47 ms, so even if we measure an input lag of 4 ms, it's only 0.53 ms higher than the minimum, which is fantastic. Below is a table of the minimum input lag for the common refresh rates on monitors.

Why there's input lag on monitors

The total input lag time is the addition of three parts

Three main functions delay the monitor: acquiring the source image, processing it, and displaying it.

Acquisition Of The Image

The more time it takes for the monitor to receive the source image, the more input lag there'll be. This has never really been an issue with PCs since previous analog signals were virtually instant, and current digital interfaces like DisplayPort and HDMI have next to no inherent latency. However, some devices like wireless mice or keyboards may add delay. Bluetooth connections especially add latency, so if you want the lowest latency possible in the video acquisition phase, you should use a wired mouse or keyboard or get something wireless with very low latency.

Once the image is in a format that the video's processor understands, it will apply at least some processing to alter the image somehow. A few examples:

The time this step takes is affected by the speed of the video processor and the total amount of processing. Although you can't control the processor speed, you can control how many operations it needs to do by enabling and disabling settings. Most picture settings won't affect the input lag, but it's only a few image processing settings that are rare on monitors anyways. One of these settings that could add delay is variable refresh rate, but most modern monitors are good enough that the lag doesn't increase much.

Once the monitor has processed the image, it's ready to be displayed on the screen. This is the step where the video processor sends the image to the screen. The screen can't change its state instantly, and the amount of time it will take depends on the technology and components of the display. As explained earlier, faster refresh rate monitors should take less time to display a new image, but it doesn't always mean they have low input lag. Input lag isn't dependent on the refresh rate, but having a high refresh rate can help lower the input lag.

What it is: Lowest input lag possible at the center of the screen, when the monitor is displaying its native resolution at its max refresh rate.
When it matters: General use and while playing video games.
Good value: < 15 ms
Noticeable difference: 5 ms
Score distribution

This input lag test represents the lowest lag a monitor can achieve while using its native resolution and its maximum refresh rate. It's the amount of lag best for both general use of the mouse and most gamers. To get the lowest amount of lag on some monitors, it’s necessary to enable a 'Game' or 'Instant' mode, but most monitors should have that setting by default.

What it is: Lowest input lag possible at the center of the screen, when the monitor is displaying its native resolution at a refresh rate of 60Hz.
When it matters: General usage as well as gaming.
Good value: < 15 ms
Noticeable difference: 5 ms
Score distribution

This input lag test represents the lowest lag a monitor can achieve while using its native resolution and a 60Hz refresh rate. It's the amount of lag that's most important for those planning to use their monitor with some console games that can't output video at higher than 60 fps; older consoles like the PS4 and Xbox One can't achieve higher than 60Hz either. It also tells us if the monitor's input lag increases at a lower refresh rate, so even though we don't the lag for other refresh rates in between, this test gives us an idea if the lag will increase much for refresh rates in between its max refresh rate and 60Hz.

What it is: Lowest input lag possible at the center of the screen, when the monitor is using its Variable Refresh Rate feature at its native resolution and max refresh rate.
When it matters: General usage as well as gaming.
Good value: < 15 ms
Noticeable difference: 5 ms
Score distribution

Our Variable Refresh Rate measurement represents the amount of input lag present when a monitor has its variable refresh rate feature enabled (either FreeSync or G-SYNC). This feature is helpful for most gamers that plan on using VRR while gaming.

We use the same testing process as for the first test, only we now enable the respective variable refresh rate feature for the monitor.

What it is: Lowest input lag possible at the center of the screen, when the monitor is using its Variable Refresh Rate feature at 60Hz.
When it matters: General usage as well as gaming.
Good value: < 15 ms
Noticeable difference: 5 ms
Score distribution

What it is: Lowest input lag possible at the center of the screen, when the monitor is displaying an HDR signal at its native resolution and highest refresh rate that supports 10 bit.
When it matters: General usage as well as gaming.
Good value: < 15 ms
Noticeable difference: 5 ms
Score distribution

Our HDR measurement represents the amount of input lag present when a monitor is displaying HDR content. This number is important for modern HDR games and for those planning on using their monitor for HDR content production.

What it is: Lowest input lag possible at the center of the screen, when BFI is enabled and the monitor is displaying a signal at the highest supported BFI refresh rate.
When it matters: General use as well as gaming.
Good value: < 15 ms
Noticeable difference: 5 ms
Score distribution

Other ways of measuring input lag

An input lag of 40ms can be seen on the television.

There's no one correct way to measure input lag because testing depends on two varying factors: the type of source and the monitor's settings. Our testing requires a specialized tool that not everyone has. The easiest way you can measure input lag is by connecting a computer to two different screens (a base screen and the test screen). You either have to know the input lag of your base screen or use a virtually instant CRT display. You can display a timer on both screens at once (preferably one with milliseconds included), and you take a picture of the screens; this is your monitor's input lag. In this image example, an input lag of 40 ms (1:06:260 – 1:06:220) is indicated.

This is, however, an approximation because your computer doesn't necessarily output both signals at once. It's also not very accurate because it depends on your camera's shutter speed and whether you can capture the correct frame with the time on it. It can give you a good indication, though.

Why is input lag testing not as detailed as TVs? 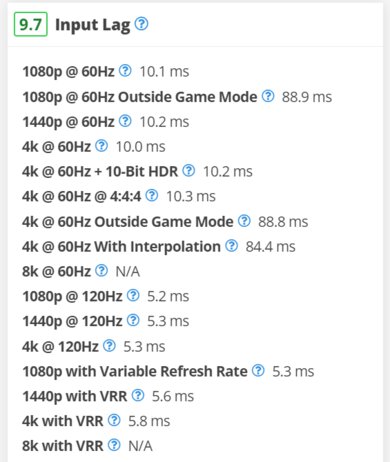 Our input lag testing for TVs uses the same tool and testing process, but we take many different measurements. We take it with different resolutions to see how upscaling affects the input lag, in and out of Game Mode, with motion interpolation, and with VRR. TVs have more results than monitors because of the way people use their TVs. People don't watch content from one source using the same settings, as they often change their settings and sources with TVs, and with that comes different input lag.

On monitors, most people are just using their PCs, and there aren't as many image processing settings, so we don't need to test those.

PC monitors tend to have a much lower input lag than the average TV, making input lag less of an issue for most people. More sensitive users can adjust settings on most monitors to reduce it even further. As a general rule, try the following (which is how we set up the displays in our tests):

Also, you can try different combinations of settings/modes/inputs until you arrive at whatever balance of features and input lag you like.

When does the input lag become noticeable?

Most people won't even see when there's any delay as it's not noticeable during desktop use, but gamers might be more sensitive to lag. Your peripherals like keyboards and mice add more latency than the monitor, so if you notice any delay, it's likely because of those and not your screen. If that's the case, try using wired connections or use USB receivers if your wireless mice and keyboards come with them because their latency is a lot lower than Bluetooth.

There's no definitive amount of input lag when people will start noticing it because everyone is different. You can try this tool that adds lag to simulate the difference between high and low input lag. You can use it to estimate how much input lag bothers you, but keep in mind this tool is relative and adds lag to the latency you already have.

Input lag is the amount of time that elapses between performing an action with a source device and seeing the result displayed on a monitor's screen. It’s mostly important for competitive gamers, but you can also notice delay when the input lag is high during regular desktop use. We test to find the lowest amount of lag a monitor can have, as well as how much lag is present when a monitor is displaying a non-native resolution, or when it has features enabled like HDR or VRR.