If you want a proper 4k or HDR experience from your TV, you need to watch genuine 4k or HDR video. The availability of high-quality, 4k HDR content is increasing steadily and is much more readily available than even a few years ago. Here are some of the ways you can watch the Ultra High Definition (UHD) content you crave.

A lot of the earliest 4k Blu-ray movies weren't actually filmed in 4k. They were filmed in lower resolutions then upscaled to 4k in editing, which is still an upgrade over 1080p.

Like any other stream, these options use your internet connection to deliver content to you. 4k streams require much more bandwidth than regular HD, so make sure you have both a good enough connection speed and a high enough bandwidth cap to stream 4k content.

Keep in mind that in an effort to keep bandwidth costs down, the bit rate for some 4k streaming content can be relatively low—even 1080p Blu-rays have higher bit rates. Bit rate refers to how many bits of information are processed per second. So, while the resolution is there for 4k streaming, the streams have less information, meaning the quality isn't as high.

These are videos uploaded by regular users, but for the sheer amount of 4k content, nothing has YouTube beat for now. If you're looking for a way to test out a new 4k TV's capabilities, this is a great place to start. YouTube also supports HDR, which is supported by many streaming devices and the majority of 4k UHD TVs.

Here are a few 4k videos to get you started.

Here are some HDR Channels and videos to test out that functionality. Netflix has continued to add 4k content in the past few years, but you need to have a 'Premium' subscription to access it. Many of the offerings are Netflix Originals, but there is a significant selection of licensed movies as well. Almost every Netflix Original released is now available in HDR, as well as a lot of licensed content. Almost all new content is in 4k nowadays.

It's important to note that not all Netflix apps/devices allow 4k streaming. As with Ultra HD Blu-Rays, your player and screen must support HDCP 2.2 or higher, which, unfortunately, excludes some monitors.

You get access to quite a few 4k TV shows and movies with an Amazon Prime subscription. Amazon has pushed pretty hard to add HDR content, too, which is good news for people with compatible TVs. Much like Netflix, they're also producing a lot of their own high-budget HDR content, including popular shows like The Boys and Tom Clancy's Jack Ryan.

All of Amazon's original content is available in HDR10+ on compatible TVs, which defaults to HDR10 on devices that don't support it. Like Netflix, Amazon Prime also has some Dolby Vision HDR content, which can be played from the Prime app on the majority of TVs that support Dolby Vision.

Similar to Amazon Prime Video, 4k HDR content is included with a standard Disney+ subscription. As long as you're watching on a compatible device, and you have enough bandwidth, the app will automatically play available content in 4k and/or HDR.

Disney has a growing selection of titles available in 4k and HDR10, as well as some titles that support Dolby Vision and Dolby Atmos sound. These are mostly Disney's original content, but a lot of the platform's most popular titles support HDR, including shows like The Mandalorian along with the entire Star Wars and Marvel catalogs, among others.

Hulu had offered 4k programming as far back as 2016, but quietly pulled all of its 4k content in 2018. In 2019, however, Hulu re-released its 4k content. While the 4k catalog is limited to only Hulu and FX shows and movies, most of Hulu's popular original content, like The Handmaid's Tale and Little Fires Everywhere, is available in 4k, as long as your device supports it.

Unfortunately, at this time, Hulu's 4k content is only available on select devices. You can see the list of 4k compatible devices here. Hulu also doesn't support HDR.

When it first launched in 2020, HBO Max didn't have any 4k offerings, but that's started to change. Wonder Woman 1984 was the first 4k HDR release on HBO Max, and Warner Bros. announced that all of its 2021 movie lineup would also be released on HBO Max in 4k at no extra cost to subscribers. It's unclear, however, if or when HBO Max will offer 4k for other content besides new release movies.

Launched on March 4, 2021, Paramount+ is the new streaming platform from ViacomCBC. It's a rebranded version of CBS All-Access with expanded content from CBS, MTV, BET, Nickelodeon, Comedy Central, and more. Its Premium tier offers 4k HDR streaming and the ability to download 4k shows and movies to watch offline. So far, 4k is mostly limited to the platform's original content.

In 2019, Apple launched its own streaming service to compete with other streaming giants that produce their own content. Apple TV+ initially launched with only original content, but lack of growth has pushed Apple to begin licensing non-original content. You can access Apple TV+ through an Apple TV box or through the Apple TV app, which is available on a number of devices. The app also supports Dolby Vision and Dolby Atmos on certain devices, including compatible Apple devices and some non-Apple devices.

While it's not necessary to have an Apple TV 4k box in order to watch in 4k HDR, having an Apple TV 4k allows you to achieve much higher bit rates than on the app alone, resulting in a higher quality 4k stream.

These options allow you to rent or buy movies for streaming or download. As with the subscription streaming options, they'll use bandwidth to deliver your content to you. Once again, the bit rates are not as high as you’ll find with physical media.

Amazon Prime Video also has a store with a great selection of 4k UHD content available to rent or purchase on-demand. There are some restrictions on access (you have 30 days from purchase to start a rental and films must be watched within 48 hours of starting), but the same is true of most video-on-demand (VOD) services. Individual TV episodes start at $1.99 and go up to $19.99 for a season, while movies typically cost $3.99 or $5.99 to rent and between $7.99-$19.99 to buy. Newer theatrical releases are also available through early access for $19.99.

A lot of movies that come free with a Prime Video subscription are also available to either rent or buy through the store if you'd rather not pay for a full Prime subscription. There's also premium content that's only available to rent and/or buy, even if you're a Prime member.

Vudu has a big selection of 4k UHD and HDR content available to rent or purchase. You'll need a 4k UHD TV with access to Vudu to watch movies in Ultra HD, or a 4k Roku connected to a 4k TV. To watch the movies in HDR, you will need to get a TV that supports Dolby Vision. Prices can vary, but they're pretty competitive with other VOD services. You can expect to pay about $19.99 to purchase a movie in 4k UHD, and around $3.99-$7.99 to rent. New releases, however, can go up to $19.99 just to rent.

Even if you don't have an Apple TV or an Apple TV+ subscription, Apple also offers 4k and HDR content to rent or purchase through iTunes. Plus, 4k movies and shows in the iTunes store cost the same as their HD counterparts. You can even upgrade existing purchases to 4k at no extra cost, as long as the content is available in 4k. Prices of rentals and purchases vary but you can expect similar prices to other VOD services.

These are options that are exclusive to those with subscriptions to particular TV providers. Some use up bandwidth, while others are delivered via satellite. The bit rates for the various systems vary.

Available on some Samsung and LG 4k TVs, the Xfinity UHD Sampler app requires a Comcast subscription that includes Xfinity UHD. A couple of TV shows are available through this, including Chicago Fire.

DirecTV was one of the first major TV providers to offer 4k content, mostly live sports and concerts. The 4k Genie Mini is a device that gives you access to more 4k content if you're a DirecTV subscriber. You also need a Genie HD DVR, an internet connection, and either a compatible smart TV or a 4k Genie Mini. If you’ve got all of those components, you can rent 4k movies from DirecTV, and also access a dedicated 4k channel that plays nature documentaries, travel videos, and other content. 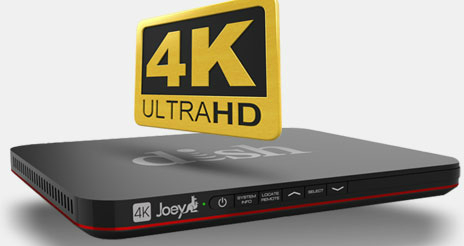 Dish's Hopper 3 and 4k Joey are both capable of playing 4k video. The Hopper 3 is the main DVR/receiver, and the Joey can access content through the Hopper 3 when the two are connected via a wired network. You can use these to access on-demand 4k movies and TV shows, as well as Netflix.

Over-the-air (OTA) antennas are an alternative to cable that allows you to broadcast television channels for free using antenna signals. With the new ATSC 3.0 broadcasting standards (marketed as NextGen TV), you can now get OTA broadcasts in 4k UHD. There are some limits, of course. While NextGen TV is expanding, it's currently only available in select American cities. Also, while networks and broadcasters are increasingly adopting 4k, notably in sports broadcasting, converting all content to 4k is costly, and it will likely take some time before it's ubiquitous.

Antennas are also limited by location and signal strength. The amount of channels you get depends on where you are and how large an area your antenna covers. Still, this is an increasingly viable and affordable option if you want an alternative to some of the more mainstream digital avenues mentioned above. NextGen TV is also designed to work with the Internet, meaning it could bridge the gap between broadcast and streaming.

4k content availability has improved a lot in recent years and should continue to improve at a rapid pace. There are many different services available at several different price points, meaning most people who want to enjoy 4k UHD content on their TVs should be able to find something that suits them well.

You can also check out our recommendations for the best 4k TVs and the best HDR TVs.