Driven by data, run by a passionate team of engineers, testers, technical writers, developers, and more.
We are hiring!
Black Friday deal: The TCL 5 Series/S546 2021 QLED 55" is on sale for 50% off on BestBuy.com. See all TV deals.

We've started our biggest test yet! To try to better understand how long a TV should last, we're running 100 TVs through an accelerated longevity test for the next two years. Read more about it here, or watch our first video about the test here!

4k vs 1080p and Upscaling
What's the Difference?

One of the first things you see when shopping for a TV is its resolution. You'll often see the resolution slapped right on the box or even in the model name. 4k TVs started to dominate the TV market in the middle of the 2010s, and they soon took over from 1080p as the most common resolution found on TVs. Almost every TV from big manufacturers has a 4k resolution, and it's actually hard to find 1080p TVs now, but what exactly are the differences between each?

This article looks at the differences between 4k and 1080p TVs, and how they affect your viewing experience. 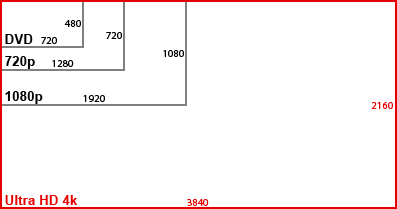 There are different marketing names for each, but having a 4k TV doesn't necessarily mean it's better than a 1080p; there are many different factors that affect the picture quality. A higher resolution simply means it supports more content and delivers crispier images. You can see some of the differences between 4k and 1080p below. You can also read about resolution here.

As 4k TVs are the norm, native 4k content is also easy to find on most streaming apps like Netflix, Disney+, and Amazon Prime Video. Physical video sources, like Blu-ray players and gaming consoles, are starting to support a 4k resolution as well, but they were limited to 1080p for a long time. Regular Blu-ray discs are 1080p, and there are now 4k Ultra HD Blu-ray discs as well, but it's an entirely new format and requires you to upgrade your Blu-ray player and purchase new 4k Ultra HD Blu-ray discs. The original Xbox One and PS4 were limited to 1080p, and then the PS4 Pro and Xbox One X/S, followed by the PS5 and Xbox Series X, were each released with 4k support.

It's becoming harder to find 1080p TVs in the 2020s, and they're usually limited to small, entry-level models. If you have limited space and need a small TV, you'll likely need to get a 1080p model, since 4k TVs are usually available in larger sizes. The 4k image is smoother and has more detail than the 1080p image. Look closely and you’ll see that the edges around objects in the 1080p picture are a bit more blurry, and text looks clearer on the 4k TV. The difference is that the higher pixel count of a 4k screen allows for a more natural representation of the picture, with added detail in the image. However, it can be very hard to tell the difference when viewing at a distance, and the jump in quality isn't as noticeable from regular HD, which is 720p, to 4k. Native 4k content is very popular, especially on streaming apps, but some of what you watch may still be lower-resolution content upscaled to UHD, which will look different from native 4k. To present lower-resolution material on a 4k TV, the TV has to perform a process called upscaling. This process increases the pixel count of a lower-resolution image, allowing a picture meant for a screen with fewer pixels to fit a screen with many more. However, it doesn't increase the detail of the image since the signal has the same amount of information. Above you can see the difference between a 1080p resolution on the 4k Hisense and on the 1080p TCL.

Overall, the two images look very similar. There isn’t any more detail in the upscaled picture than you can see in the native 1080p picture, so whether or not it looks better is entirely subjective. There are some 4k TVs that have trouble upscaling 1080p, but it's rare. This doesn't mean that 4k is inherently worse for watching 1080p content since most TVs don't have this problem, but it's important to make sure the model you're buying doesn't have any issue with this before going through with the purchase.

HDR, which stands for High Dynamic Range, started to become more popular around the same time as 4k TVs. While it's often marketed together, it has nothing to do with the resolution and actually refers to the colors and luminance. It allows content creators to use a wider range of colors and luminance levels. It helps improve the picture quality and produces richer, more vibrant colors. There are different HDR formats, and you may see some companies advertise 4k HDR, but just because a TV supports it doesn't mean that HDR looks good. However, the large majority of 1080p TVs don't even support HDR, so if you want to watch your favorite HDR content, go for a 4k TV. You can learn more about HDR here.

There are limits to what the eye can perceive, so if you sit too far from your TV, you won't be able to see all the detail in the image. That means that if you sit too far away from a 4k TV, the picture may look like what you’d get on a TV with a lower-resolution screen. 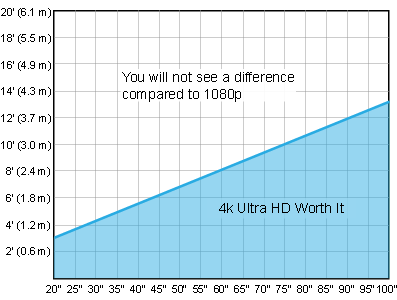 This chart illustrates the dividing line for normal 20/20 vision. To use the chart, check your viewing distance on the vertical axis and the size of the TV on the horizontal one. If the resulting position is above the line, you probably won't see a major difference between a 1080p and a 4k TV. Essentially, there's only a noticeable difference if you sit close to a large screen TV.

That doesn’t mean you won’t see any difference at all if you sit further away – it just means it won’t be significant. You can learn more about TV size and viewing distance here.

Winner: 4k. While 4k won't give you much of a benefit after a certain distance, it's always better from up close. In the United States, there are two standard resolutions for cable TV broadcasts: 720p and 1080i. Much like 1080p, the number refers to the vertical resolution of the screen, 720 and 1080 pixels. The letter refers to either progressive scan or interlaced scan. Every TV sold today uses progressive scan, but they're also compatible with a 1080i signal.

In an interlaced video signal, the image is separated into even and odd horizontal lines. Alternating frames display even and odd lines, meaning that each individual frame of the signal is only half of the image, and the rest of the image is displayed in the next frame. Progressive scan, on the other hand, displays the entirety of the image on every frame, so it's a bit more costly to distribute.

In the end, 1080i and 720p end up using about the same amount of bandwidth, even if 1080i covers over twice as many pixels. This means that still images look sharper on 1080i, but it isn't perfect. As you can see in the pictures above with the Samsung Q9F, 720p looks much clearer with motion. This is why sports channels use 720p since fast-moving content may not look smooth with 1080i signals.

A frequently updated list of HD US channels with their respective resolution can be found here.

8k TVs are starting to hit the market with a few models, like the Samsung Q900TS 8k QLED. An 8k resolution has 7680 horizontal pixels and 4320 vertical pixels for a total of over 33 million pixels, which is four times more than 4k. This allows for an incredible amount of detail, but it may only be noticeable if you sit really close to the screen. There's also a limited amount of 8k content available, and it requires a large amount of bandwidth. Even the new HDMI 2.1 standard can only support uncompressed 8k content up to 30fps with chroma 4:4:4.

With the extremely high cost of 8k TVs in 2021 and the limited amount of content, it's worth getting a 4k TV. However, technology evolves quickly and we may see a rise in 8k TVs in the coming years. After all, it was once a crazy thought that 4k content would become as accessible as it is now.

Winner: 4k. While 8k is technically superior, the difference with 4k is minor for a TV.

When you're shopping for a TV, it's likely you're going to get a 4k model. A TV's resolution can be its main selling point, as it's easy to throw the 4k label on any TV, but the resolution is only one small factor in the total picture quality. While 4k is an upgrade from 1080p, it may be hard to notice the difference in resolution if you sit far from the TV, or if you just watch 1080p content. Since most TVs now are 4k and it's hard to find 1080p models, you won't really have to choose between 4k and 1080p anyway.