By Daniel V. Dijamco
What it is: The Blender benchmark we use renders a 3D model of two BMW cars. Blender is an open-source 3D creation suite for making 3D models, animations, etc. Performed in a temperature-controlled environment (22℃) using Blender 2.83.
When it matters: When doing 3D graphics rendering or similar workloads, such as CAD design and 3D animation.
Score components:
Score distribution

If you're a content creator or engineer working on 3D artwork or CAD renders, you probably already know that having a powerful laptop is a must. To determine which laptop model will perform best for your needs, a Blender benchmark is a reliable indicator of a laptop's 3D rendering performance. Blender is a software application that contains tools for various scene-rendering techniques, fluid and particle simulation, and 3D modeling, among many others.

Blender benchmarks are a simple way to gauge the computational performance of a laptop. The process of rendering generally requires a lot of calculations; thus, faster render times generally translate to better performance in physics simulations and video games. If you're a 3D modeler or animator, having a laptop that can quickly provide intermediate previews of scenes is critical for artistic workflow and better freedom. Having your work be interrupted by the need to re-render the scene each time you change even the slightest placement of objects can be frustrating. Also, being able to quickly and efficiently provide professional-quality renders for projects can save time that you can use to work on other tasks.

We test the laptop's performance by simply measuring how long it takes to render a 3D scene in Blender. We measure the performance of the CPU and GPU independently, as this allows us to more easily compare results between different models.

We perform these tests one after another in a small, temperature-controlled room set to 22°C (71.6°F), with a tolerance of ±0.5°C. We keep the laptop plugged in using its included adapter and ensure that the battery is at full charge before beginning our tests.

We run Blender and our other benchmarking software and games directly off an external SSD with a USB 3.2 Gen 2 (up to 10Gbps) connection. The high bandwidth of the connection shouldn't adversely impact benchmark results. We use Blender version 2.83 LTS, which is scheduled to be maintained until 2022 to ensure consistent and repeatable results across different hardware and operating systems.

Unfortunately, Blender isn't natively available on Chrome OS, so we use the Linux version of Blender 2.83 LTS and run it in a container using Crostini. This method for loading Linux apps is available for all Chromebooks released since 2019, but you can find a list of compatible Chromebooks released before 2019 here. It's different from dual-booting Linux or running a Linux desktop environment; neither of these methods is officially supported.

GPU benchmarking is unavailable on the macOS version of Blender, so to obtain results, we use Boot Camp to run Windows 10 and run Blender 2.83 LTS from there. We can't perform this test for MacBooks that use Apple silicon, like the M1 MacBook Air.

Note: Our Blender benchmark determines the "cold performance" of the laptop. It means that this test doesn't take into account possible performance degradation due to thermal constraints. We allow three-minute intervals of idle time between runs to ensure consistency and to cancel potential effects of thermal throttling, which aren't the focus of this test. For more information on that matter, see Performance Over Time test article. 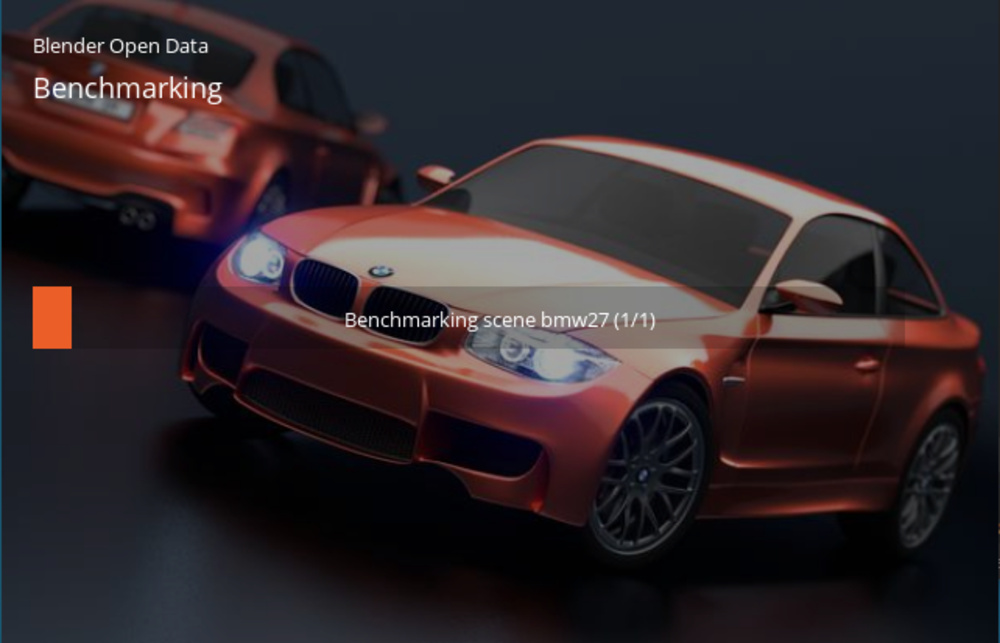 The bmw27 scene being benchmarked in Blender.

We use the well-known bmw27 scene for our benchmarks. We leave all settings set to default and only change the "Cycles Renderer Devices" setting, explained in further detail below.

Note: We only benchmark the time a laptop takes to render a scene using either the CPU or GPU, but not both at the same time. It's because the results obtained using either the CPU or GPU alone are more easily comparable between different laptop models. Also, using the CPU and GPU together to render a scene can be either faster or slower compared to using the GPU alone because it's highly dependent on the scene's complexity, meaning it isn't a reliable method of gauging the performance of the laptop itself.

What it is: How long it takes to render the 3D model of the BMW car using only the CPU. This result is the average of two runs of the test.
When it matters: When doing 3D rendering or a similar workload on the CPU, such as when the software or effects you use can't use a GPU for rendering.
Good value: 5 minutes
Score distribution

We render the bmw27 scene using the Cycles photorealistic renderer. To use the CPU to render the scene, we leave "Cycles Renderer Devices" set to "None". We run the benchmark twice, with a three-minute cooldown between runs. The render time posted in the review is the average of the two runs. We generally expect results from 3 to 25 minutes.

Blender supports CPU rendering on macOS, both on Intel- and Apple silicon-based MacBooks.

Unfortunately, Blender isn't available on Chrome OS, but there's a Linux version, which we can run in a container using Crostini. It allows us to perform the CPU render time test on x86-based Chromebooks. However, there aren't any officially supported releases of Blender for ARM-based Chromebooks, meaning we couldn't obtain a comparable render time.

Note: Rendering a scene only with the CPU uses all available cores, so this benchmark isn't a reliable method of gauging the single-core performance of a laptop.

What it is: How long it takes to render the 3D model of the BMW car using the GPU (video card). This result is the average of two runs of the test. CUDA is used on NVIDIA GPUs, OpenCL is used on others.
When it matters: When doing 3D rendering or a similar workload that can use hardware acceleration on a GPU.
Good value: 5 minutes
Score distribution

We render the bmw27 scene using the Cycles photorealistic renderer. To render the scene using only the GPU, we select "GPU Compute" under "Cycles Renderer Devices". We use the proprietary "CUDA" API for NVIDIA graphics cards, while we use the open-source "OpenCL" API for all other models, including for integrated graphics. We run the benchmark twice, with a three-minute cooldown between runs. The render time posted in the review is the average of the two runs. We generally expect results from 2 to 20 minutes.

Blender 2.83 LTS doesn't recognize any usable graphics API for GPU compute rendering on macOS. In this case, for Intel-based MacBooks, we use Boot Camp to run Blender on Windows 10 and follow the same steps above. We don't post the render time in our official test results because Blender usually performs much better on Windows, but we do list it in the text for reference.

However, as of October 14, 2021, Apple has officially joined the Blender Development Fund, which will help increase the application's compatibility on macOS and accelerate related developments. In addition, initial patches are being issued that lay the framework for an official implementation of the Metal API for the Cycles renderer after the 3.0 update.

On Chrome OS, Blender also doesn't recognize any usable graphics API for GPU compute rendering, so we can't obtain a comparable time to render on either x86- or ARM-based Chromebooks.

According to Blender's list of supported GPUs for 2.80, Blender only supports integrated Intel graphics for Haswell (4th Gen) and newer generations. In any case, we expect integrated graphics to perform worse in general compute tasks than the CPU. If you prefer, you can still use the integrated graphics on applications that support it, but keep in mind that doing so will eat into your system RAM as well.

What it is: How long it takes to render the 3D model of the BMW car using the GPU (video card), using the Optix API. On Blender 2.83 only Nvidia RTX cards support using Optix. This result is from a single run of the test.
When it matters: When doing 3D rendering or a similar workload that can use Optix API hardware acceleration on a GPU.
Good value: 5 minutes

The OptiX API is exclusive to NVIDIA RTX graphics cards. It's because this rendering technique takes advantage of the "RT cores" or "real-time ray-tracing cores," available only on RTX graphics cards. To render the bmw27 scene using the Cycles photorealistic renderer while taking advantage of ray-tracing acceleration, we select "OptiX" under "Cycles Renderer Devices". We only run this benchmark once and use the "total render time" as our final test result. We don't have an expected timeframe for the time to render, but it's generally much faster than using either CUDA or OpenCL and significantly faster than using only the CPU.

The speed at which a laptop can render complex 3D scenes is highly dependent on its hardware. Having a good, multi-core CPU is good while having a dedicated graphics card is even better. However, there are some tweaks you can make to improve your render times in whatever program you're using to render 3D scenes.

If you have a dedicated graphics card, using the CPU and GPU together often improves the time to render, if supported. It's highly dependent on the content of the scene, though. Also, you can choose different graphics APIs optimized for different hardware to boost efficiency and performance. For instance, NVIDIA graphics cards support the CUDA API. Also, their RTX-series cards support the experimental OptiX API, which takes advantage of ray-tracing cores to greatly accelerate path-based rendering methods, like the one we use in our benchmarks.

Finally, it's worth noting the differences between gaming graphics cards like the NVIDIA GeForce and AMD Radeon RX series and workstation cards like the NVIDIA Quadro and AMD Radeon Pro series. Gaming cards are generally optimized for better performance in games while maintaining a good level of graphical fidelity. On the other hand, workstation cards are optimized to manipulate highly complex 3D scenes or objects, like airplane wings or bridges, which can have hundreds of millions of individual polygons. These optimizations include different architectures or drivers that focus on different workloads. This means that while laptops with dedicated gaming GPUs perform well for rendering tasks, you should opt for a laptop with a dedicated workstation GPU if you're a professional working on critically important tasks. Otherwise, you could potentially run into stability or accuracy issues. Keep in mind that laptops with workstation GPUs tend to be significantly more expensive than laptops that have gaming GPUs.

If you care about the 3D rendering performance of your laptop, you should go for a model with a dedicated graphics card. It's because dedicated GPUs provide a substantial improvement in render time compared to using the CPU alone. Also, the time it takes for a laptop to render a 3D scene is a good indication of its performance in other workloads, like particle and fluid simulations and gaming.