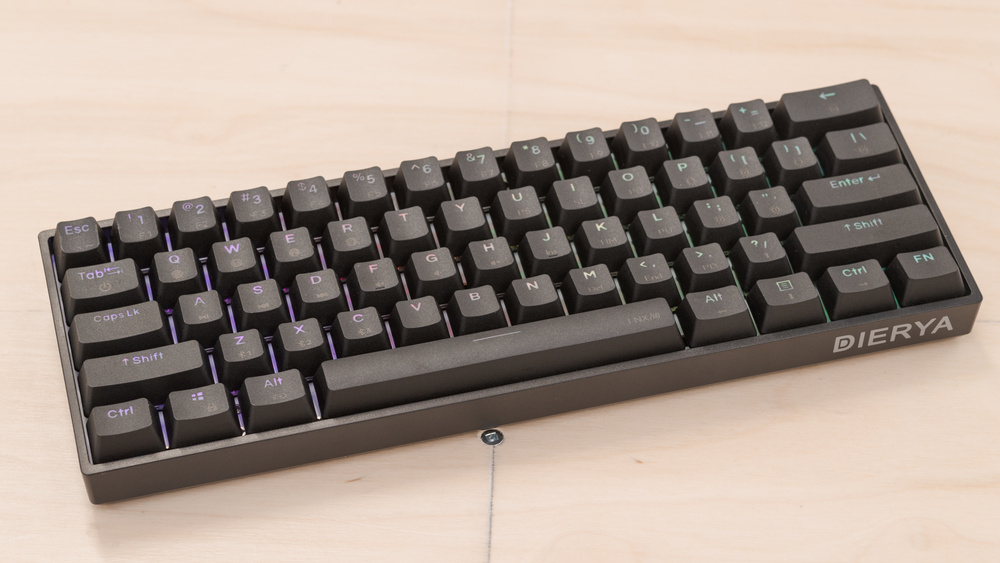 The Dierya x KEMOVE DK61 Pro is a great wireless, mechanical keyboard. This compact board is an amazing choice for gamers, as it features customizable RGB backlighting, macro-programmable keys, and the Gateron Brown switches on our unit offer a very light experience. However, if you don't like the feel of the Brown switches, you can also get this keyboard with Red or Black switches, which are quiet and linear, or Blue switches, which are loud and clicky. Unfortunately, the companion software isn't very user-friendly, as setting macros and customizing the backlighting can be annoying to figure out. Also, while the latency is decently low over a wired connection, it's terribly high via Bluetooth.

The Dierya DK61E is a remarkable gaming keyboard. The Gateron Brown switches on our unit offer a light and tactile gaming experience. Also, the PBT plastic keycaps feel good to touch and feel stable overall. There's RGB backlighting and programmable macros, but they can only be customized in the companion software, which can be difficult to use. Also, the keyboard lacks any incline settings or a wrist rest and can cause fatigue. Unfortunately, while the latency is decently low over a wired connection, it's terribly high over a Bluetooth connection.

The Dierya DK61E is a great keyboard to use with a mobile device. It can connect over Bluetooth and be paired with up to three devices at once. Unfortunately, we did notice some inconsistencies with the Bluetooth connection, resulting in cases of extreme lag. Also, the latency is terribly high via Bluetooth. While the keyboard is compact, it's quite heavy for its size.

The Dierya DK61E is a decent keyboard for office use. The ergonomics are mediocre, as it lacks both a wrist rest and any incline settings, which may result in wrist pain or fatigue. Also, while the latency is decently low over a wired connection, it's terribly high via Bluetooth. On the upside, the Gateron Brown switches provide a great and light typing experience.

The Dierya DK61E is a great keyboard for programmers. There are programmable macros and customizable RGB backlighting, but they can only be modified in the companion software, which isn't very user-friendly. Typing with the Gateron Brown switches feels great due to the light, tactile feedback. Unfortunately, the keyboard has no wrist rest or incline settings, which can lead to fatigue or pain. Also, while the latency is decently low over a wired connection, it's terribly high via Bluetooth.

The Dierya DK61E is decent for use with a home theater PC. It supports Bluetooth and has excellent compatibility. It has media controls through hotkeys, but it lacks a trackpad to control the mouse cursor. There's RGB backlighting, which is great for dark room viewing. Unfortunately, the latency is terribly high via Bluetooth, so there may be a noticeable delay.

The Dierya DK61 can be purchased wired or wirelessly in a wide variety of switches. You can see our unit's label here.

The Dierya DK61 is a wireless, mechanical compact (60%) keyboard with a great build and PBT plastic keycaps. It can pair with up to three devices, unlike the similar Obinslab Anne Pro 2, which can be paired with up to four devices. Every key is macro-programmable and the RGB backlighting can be customized with the companion software, unlike similar keyboards that require you to do the customization on the boards themselves, such as the Keychron K6. For other options, check out our recommendations for the best RGB keyboards, the best gaming keyboards, and the best mechanical keyboards.

The Dierya x KEMOVE DK61 Pro and the Razer Huntsman Mini are both compact gaming keyboards, but the Razer can only be used wired, whereas the Dierya can be used both wired and wirelessly. The Dierya is available in a variety of switches, while the Razer is only available with linear and optical switches. The Dierya has worse typing quality because it feels laggy due to its high latency. Both keyboards come with a customization software that lets you customize backlighting and set macros, but neither are available on macOS.

The Dierya x KEMOVE DK61 Pro and the Razer Huntsman are very different keyboards. The Dierya has a compact 60% layout and can be used wirelessly, while the Razer is full-sized and can only be used wired. If you want a keyboard that you can use with multiple devices, the Dierya may be a better choice since its Bluetooth support lets you pair with up to three devices at once, and it's compatible with a variety of operating systems, including iOS and Android. However, the Bluetooth is sometimes unreliable, and the latency is very high. If you want a keyboard for gaming, the Razer may be a better choice since it has very low latency, so you shouldn't notice any delays.

The Obinslab Anne Pro 2 and the Dierya x KEMOVE DK61 Pro are both compact and wireless gaming keyboards. The Obinslab may be a better choice, especially for gaming, since its latency is much better than the Dierya whether over a wired connection or over Bluetooth. The tactile Gateron Brown switches on our Dierya unit have a slightly lower operating force than the same switches on our Obinslab unit, but the difference is very small and likely won't be noticeable. However, the pre-travel distance is much shorter on the Dierya, which should result in a more responsive feel. Both can be used wired or wirelessly and can pair with multiple devices simultaneously over Bluetooth, but the Obinslab can pair with up to four devices at once, while the Dierya can pair with up to three at once.

The Dierya x KEMOVE DK61 Pro is a better keyboard than the Ducky Mecha Mini V2. The Dierya can be used wirelessly over Bluetooth and has companion software available to customize the RGB backlighting and set macros. That said, the Ducky's build is much better as it's made of aluminum and has one incline setting.

The Dierya x KEMOVE DK61 Pro and the Ducky One 2 Mini V1 are quite different despite having the same compact 60% layout. The Dierya is a wireless keyboard with a multi-device pairing feature, while the Ducky is a wired-only keyboard. The Dierya has lower latency for gaming, but only if you use it wired, and its Gateron Brown switches have a lower operating force than the Cherry MX Browns on the Ducky, making them easier to actuate. However, the Ducky provides a better typing experience because the Dierya's high profile can cause a bit of fatigue over time. That said, both keyboards are available in different switch types, so the typing experience may differ depending on which you get. The Dierya's wireless connectivity makes it more versatile as it can be used with a wider variety of devices, and it has software for customization, which the Ducky lacks.

This is a compact (60%) keyboard that takes up very little space on your desk, but it's quite heavy for its small size.

The build quality is great. Its frame is made of solid plastic that shows no signs of flex. Keycaps are made of PBT plastic and feel good to touch, but there's a bit of wobble on some of the larger keys. The small support feet are made of rubber, which should prevent the board from sliding around as you use it.

The Dierya DK61's ergonomics are mediocre. There's no detachable wrist rest or incline settings, meaning you can't adjust the keyboard's high profile, which may cause strain and fatigue with use.

The Dierya DK61E has outstanding RGB backlighting. Each key is individually lit and there are presets available within the board itself, including one that responds to ambient sound as a result of the built-in mic. Unfortunately, customizing the layout of the lights within the software isn't user-friendly. Also, it's quite poor at color mixing since white backlighting looks blue.

This wireless keyboard charges via a braided USB-C cable, and you can use it as it charges.

This keyboard has superb wireless versatility. It can only connect via Bluetooth as opposed to a proprietary receiver, and it can be paired with up to three devices at once. On the other hand, we noticed that the Bluetooth connection can result in high levels of lag and seems to happen most when switching from wired to wireless.

The Dierya DK61E has a nice amount of extra features. All keys are macro-programmable, but only through the companion software, which is unintuitive and not user-friendly. It also features media hotkeys and a Windows Lock key. This keyboard isn't hot-swappable, but if you prefer something similar that is, then check out the ROYAL KLUDGE RK61.

Update 10/19/2020: We corrected a mistake in the spelling for the Gateron Optical Brown switches.

Our unit uses Gateron Brown switches, which offer nice tactile feedback and feel very light, as they have a low operation force and have a short pre-travel distance. That said, if you don't like the feeling of Brown switches, you can also get this keyboard with Gateron Blue (clicky), Black (linear), or Red (linear) switches.

This keyboard's typing quality is great. The PBT keycaps feel nice to the touch, and the alpha-numeric keys are very stable, with only some of the other keys, such as "\" having a noticeable wobble. Despite its compact size, typing feels easy and natural, requiring little time to adjust. On the other hand, there are no incline settings or wrist rest, and the high profile of the keyboard may fatigue your wrists over time. Also, the Bluetooth connection can be unreliable at times, with some instances of lag being so bad it renders the keyboard unusable. This seems to happen most when switching from wired-use to wireless.

Update 02/16/2021: We've retested the keyboard's Bluetooth latency. It's much higher than the wired latency and is inconsistent. Also, we had trouble pairing it to our test PC, and the connection drops frequently.

The latency is decent. It's very low when using a wired connection, but it increases significantly over Bluetooth. We also noticed during testing that the Bluetooth latency is inconsistent, and the connection drops frequently.

The Dierya DK61's companion software, KEMOVE Driver, offers great features. You can set macros and program the backlighting from the software, although neither of these experiences is very user-friendly. Unfortunately, the software isn't compatible with macOS or Linux. Note that the software doesn't detect the keyboard over Bluetooth, so you need to connect it to your computer with a cable in order to make customizations.

The keyboard has excellent compatibility. It's partially compatible with macOS, iOS, and iPadOS, as the 'Pause Break' and 'Scroll Lock' buttons don't work. Also, the companion software, KEMOVE Driver, is only compatible with Windows.