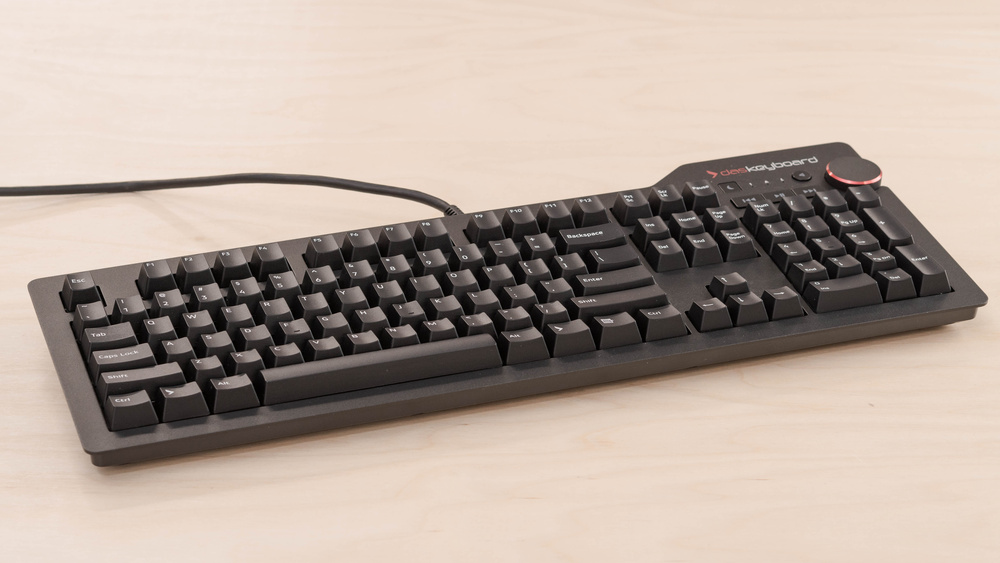 The Das Keyboard 4 Professional is a decent wired mechanical keyboard. It's a well-built, full-sized model with dedicated media controls, including a large volume wheel for easy access. Our 'Soft Tactile' model has Cherry MX Brown switches that provide a light and responsive typing experience with good tactile feedback. However, they're a bit on the louder side when it comes to typing noise, not the most ideal for quiet office environments. It comes with a 'footbar' that you can use as a ruler or as an incline setting, but it doesn't include a wrist rest. Unfortunately, it lacks backlighting, programmable keys, and software for customization. Lastly, its latency is relatively high for a wired keyboard, which shouldn't affect desktop use, but it might disappoint more serious gamers.

The Das Keyboard 4 Professional is mediocre for gaming. Its Cherry MX Brown switches have a short pre-travel distance and light actuation force; however, latency is higher than most wired keyboards. Sadly, it doesn't have backlighting or programmable keys. The ergonomics are just okay; it only has one incline setting and doesn't include a wrist rest.

The Das Keyboard 4 is a wired-only keyboard and isn't suitable for use with mobile devices.

The Das Keyboard 4 Professional is decent for office use. Its Cherry MX Brown switches provide a light typing experience with good tactile feedback, but they might cause too much noise for a quiet office environment. It comes with a 'footbar' that attaches to the keyboard magnetically, giving you a 4-degree incline, and it can also be used as a ruler. It doesn't feel tiring to type on for long periods, but some people might need a wrist rest, and there isn't one included in the box. Compatibility is good with various operating systems, and there's also a dedicated macOS variant if you prefer.

The Das Keyboard 4 is mediocre for programming. It's well-built, has good compatibility with various operating systems, and provides a good typing experience. It doesn't feel fatiguing to type on, but some people might need a wrist rest, and it isn't included. Unfortunately, it lacks backlighting, programmable keys, and software for customization.

The Das Keyboard 4 is bad for use with a home theater PC. It's a wired-only keyboard, and its large, full-size layout takes up a lot of space. It lacks backlighting, making it harder to see the keys when watching a movie or gaming in the dark. Also, it doesn't have a trackpad, which means you need a dedicated mouse to move the cursor.

We tested the Das Keyboard 4 Professional with Cherry MX Brown (Soft Tactile) switches, and it's also available with Cherry MX Blue (Clicky) switches. There are three other variants; you can see the differences between them in the table below.

You can see our unit's label here.

The Das Keyboard X50Q is much better than the Das Keyboard 4 Professional. The X50Q has better build quality, customizable backlighting, and programmable keys. It also has software support and includes a wrist rest. The X50Q's Gamma Zulu switches are very similar to the Cherry MX Browns on the 4 Professional, but they have a shorter pre-travel distance and a lighter actuation force, resulting in a lighter and more responsive typing experience. The X50Q is only available with the Gamma Zulu switches, while the 4 Professional is available with Cherry MX Browns or Blues.

The Logitech MX Keys and the Das Keyboard 4 Professional are very different keyboards. The Logitech is a wireless keyboard, which means it can be used with mobile devices, and you won't have a cable running from the TV to the couch in a home theater PC setup. It has backlighting, multi-device pairing, and it provides a better and quieter typing experience. The Das Keyboard has dedicated media keys and USB passthroughs, which the Logitech lacks. Neither keyboards are recommended for fast-paced gaming as they both have relatively high latency.

The Logitech G513 is much better than the Das Keyboard 4 Professional. The Logitech has backlighting, programmable keys, and software for customization. It also has much better ergonomics because it offers two incline settings and includes a wrist rest. The Logitech's Romer-G and the Das Keyboard's Cherry MX Brown are both switches that provide tactile feedback, but the Romer-G has a shorter pre-travel and a lighter actuation force. Also, the Logitech has significantly lower latency, making it better for gaming.

The Corsair K70 RAPIDFIRE is better than the Das Keyboard 4 Professional, mainly because it has many more features. The Corsair has backlighting, programmable keys, and software for customization. Its Cherry MX Speed switches have a shorter pre-travel distance and lighter actuation force than the Cherry MX Brown switches on the Das Keyboard, resulting in more responsiveness when gaming. However, the Speed switches might be overly sensitive for general typing and don't provide tactile feedback like the Cherry MX Browns. The Corsair has better ergonomics because it includes a wrist rest and provides two incline settings, but typing on it can be fatiguing after a while because key spacing is wider than most keyboards.

The Razer Huntsman is much better than the Das Keyboard 4 Professional for most uses. The Razer's optical switches have a shorter pre-travel distance and are easier to actuate, making them more responsive than the Das Keyboard's Cherry MX Browns. Also, the Razer has significantly lower latency. Both switch types provide tactile feedback, but the Razer's switches are much louder because they also give audio feedback. Feature-wise, it's a bit of a toss-up. The Razer has backlighting, programmable keys, and software support, while the Das Keyboard has USB passthroughs and dedicated media controls.

This is a large, full-size keyboard that takes up a fair amount of desk space.

The build quality is good. It has a plastic frame with an aluminum top plate that feels solid. The keycaps are ABS, and the legends are laser-etched, so they won't fade over time. Most of the keys are stable except for the spacebar, which rattles a bit. The rubber feet do a good job of preventing the keyboard from sliding around. Overall, it's sturdy but unremarkable.

The Das Keyboard 4 has mediocre ergonomics. The profile isn't too high, but a wrist rest would make it more comfortable, and unfortunately, there isn't one included. The 'footbar' attaches to the keyboard magnetically and only provides one incline setting.

The cable is rubber-coated and should be long enough for most setups. It's not detachable.

This is a wired-only keyboard that can't connect wirelessly.

This keyboard has dedicated media controls that include a large volume wheel. There are two USB passthroughs, but they only work if the keyboard is plugged into a USB 3.0 port. Unfortunately, there are no programmable keys. The incline 'footbar' can be used as a ruler as well.

The unit we tested is the 'Soft Tactile' model, which uses Cherry MX Brown switches. These switches don't require much force to actuate, they have a short pre-travel distance, and they provide tactile feedback. This keyboard is available with Cherry MX Blue switches that provide tactile and audio feedback; however, we didn't test it.

The typing quality is good. Although the keycaps are made of ABS plastic, they don't feel too cheap, and except for a slight wobble on the spacebar, all the keys are very stable. The keys have a relatively standard spacing, so it doesn't require much adaptation to type accurately. The Cherry MX Brown switches provide a light and responsive typing experience without being overly sensitive, and they give tactile feedback so that you know when a keystroke is registered. It doesn't feel fatiguing when typing for a prolonged period, but a wrist rest would help to reduce strain in the wrists.

Typing noise is a bit loud with the Cherry MX Brown switches, so it might not be suitable for a quiet office environment. Although we didn't test it, we expect the Cherry MX Blue switches to be even louder.

The latency is decent, although a bit high for a wired connection. It should be fine for desktop use, but it might not be good enough for gamers looking for the lowest input lag. If you want a keyboard with better latency, check out the Razer Huntsman V2 Analog.

There's no software for customization.

This keyboard is fully compatible with Windows and Linux. On macOS, the Pause, Scroll Lock, and Sleep buttons don't work. There's a native macOS version available, but we didn't test it.