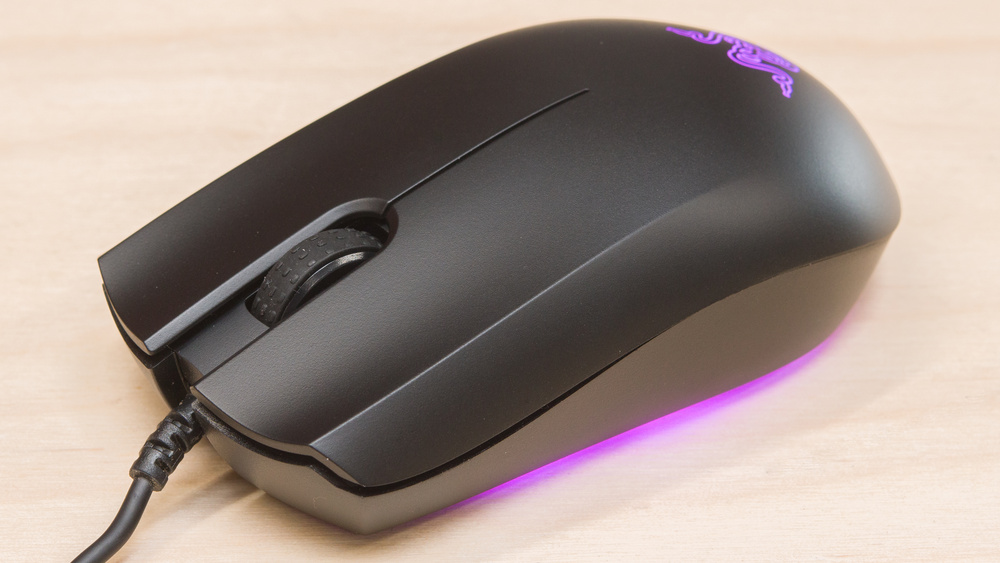 The Razer Abyssus Essential is a straightforward wired gaming mouse with a solid plastic shell and a symmetrical shape. It has a true ambidextrous design that's very similar to the Razer Abyssus V2, released in 2016. However, the shape isn't identical, and several minor features are missing from the Essential version, including a dedicated CPI button and rubberized side grips. Performance-wise, it has very good latency and a low minimum lift-off distance. Unfortunately, it has a somewhat narrow CPI range, and the rubber cable feels cheap and inflexible compared with the cables on similar wired gaming mice.

The Razer Abyssus Essential is adequate for office work. It feels well-built and is suitable for all grip types and most hand sizes. You can reprogram buttons using the customization software. Unfortunately, it has very few buttons to reprogram. It's also a wired-only mouse, and its scroll wheel is missing both a free-scrolling mode and left/right inputs for horizontal scrolling.

The Razer Abyssus Essential is a very good FPS gaming mouse. It's somewhat lightweight, has very good click latency, a very low minimum lift-off distance, and feels well-built. It also has a true ambidextrous design, so it's equally well-suited for right- and left-handed gamers. Unfortunately, it doesn't have side buttons, it has a somewhat narrow CPI range, and you can only adjust the CPI by increments of 100. Additionally, its feet make a slight scratching sound on mousepads and desks, and its rubber cable feels cheap and has poor flexibility.

The Razer Abyssus Essential is adequate for MMO gaming, but it isn't specifically for this use. Unlike dedicated MMO gaming mice, which typically have many side buttons, this mouse has none. Performance-wise, it has a somewhat narrow CPI range, and you can only adjust the CPI by steps of 100. It also has a cheap-feeling rubber cable with poor flexibility that retains plenty of kinks from its packaging. That said, it feels well-built and has low click latency.

The Razer Abyssus Essential is very good for ultra-light gaming; However, it weighs 80g, placing it at the upper threshold of what we consider lightweight. It feels sturdy and has a true ambidextrous design, very good click latency, and a very low minimum lift-off distance. Unfortunately, it has a somewhat narrow CPI range, and you can only adjust the CPI by steps of 100. Also, the feet make a slight scratching sound over mousepads or directly on desks, and its rubber cable feels cheap and has poor flexibility.

The Razer Abyssus Essential is inadequate for travel use. It's too bulky to fit in most laptop cases and bags, and it's wired-only, so it'll be cumbersome to use in tight spaces like buses, trains, or planes. It also lacks onboard memory, so you can't use your custom settings on computers without the software installed.

The Razer Abyssus Essential we purchased is black, and there are no other color variants. You can see the label for our unit here.

The 2018 Razer Abyssus Essential is a mid-tier, true ambidextrous, wired gaming mouse very similar to the 2016 Razer Abyussus V2, which itself is based on the original Razer Abyssus released in late 2009. Compared to the V2, the Essential version has an improved sensor and more RGB lighting, but it lacks a dedicated CPI button and rubberized side grips, which are standard on the V2. Additionally, the shape isn't identical between the two versions. Compared to similar, contemporary gaming mice, this mouse lacks common features, including side buttons. Additionally, its rubber cable is of poor quality, and the overall weight of the mouse puts it right on the edge of being too heavy to classify as a lightweight option. There are many higher-performing available unless you're a dedicated fan of the low-profile, symmetrical shape.

The Razer Viper Mini is a significantly better wired gaming mouse than the Razer Abyssus Essential. The Viper Mini is much lighter and feels better built. It has a much more flexible cable and feet that glide much more smoothly on mousepads and desks. The Viper also has a slightly wider CPI range, significantly lower click latency, and onboard memory. It also possesses a pair of side buttons on the left and a dedicated CPI button behind the scroll wheel, which are features the Abyssus lacks.

The Razer DeathAdder V2 and the Razer Abyssus Essential are similar wired gaming mice, but the DeathAdder V2 performs much better overall. The DeathAdder V2 has a right-handed shape, two side buttons on the left, and a pair of CPI buttons behind the scroll wheel. It also has a more flexible cable, feet that glide more smoothly, a broader CPI range, and significantly lower click latency. On the other hand, the Abyssus Essential has a symmetrical shape, but it lacks side buttons and doesn't have any dedicated CPI buttons.

The Razer Viper Ultimate is a much better gaming mouse than the Razer Abyssus Essential. The Viper Ultimate connects wirelessly with its USB receiver and has a pair of side buttons on either side, while the Abyssus is wired-only and has no side buttons. The Viper Ultimate is also slightly lighter, its feet glide much more smoothly on mousepads and desks, its CPI range is significantly wider, and you can adjust the CPI more precisely. It also has lower click latency and onboard memory, which the Abyssus Essential also lacks.

The Logitech G PRO X SUPERLIGHT is a much better gaming mouse than the Razer Abyssus Essential. The Logitech connects wirelessly with its USB receiver, and it has a pair of side buttons on the left side. On the other hand, the Abyssus is a wired-only mouse without any side buttons. The Logitech is much lighter, feels sturdier, and has feet that glide much more smoothly on mousepads or desks. Also, the Logitech has a vastly wider CPI range, a CPI you can set more precisely, and lower click latency. The companion software also has onboard memory and is compatible with Windows and macOS, while the Razer software is only compatible with Windows and lacks onboard memory.

The GLORIOUS Model D is a better wired gaming mouse than the Razer Abyssus Essential. The GLORIOUS is lighter, it has a much more flexible cable, and its feet glide more smoothly on mousepads and desks. It also has a wider CPI range and somewhat lower click latency. The customization software also has onboard memory, which the Razer lacks. On the other hand, the Razer has lower minimum lift-off distance.

The Razer Abyssus Essential has a subtle gamer aesthetic. It has a matte black plastic body with RGB zones in the logo on the palm rest and in a strip around the bottom that casts an underglow below the mouse. Note that you can adjust the RGB lighting as a whole using the companion software, but the two zones aren't independently customizable. 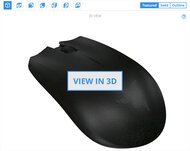 The Razer Abyssus Essential feels well-built and sturdy. The body is solid textured plastic, and there's no creaking or flexing. There aren't any loose parts or rattling sounds when you shake the mouse. However, there's a small amount of side movement in the scroll wheel, but it isn't noticeable during regular use.

—
7.5
Design
Comfort Of Use
Right-handed No
Left-handed No
Ambidextrous Yes
Coating Matte
Finger Rest No

If you have large or extra-large-sized hands, you'll likely find the body of the Razer Abyssus Essential too short to hold comfortably using a palm grip.

If you have extra-large hands, you'll need to curl your fingers too sharply to comfortably use a claw grip with this mouse.

If you have small hands, the height of the palm bump forces your wrist into an uncomfortable position using a fingertip grip.

The Razer Abyssus Essential has a thin rubber cable that feels cheap. It also has poor flexibility and retains lots of kinks from its packaging.

The Razer Abyssus Essential's feet are good. They glide well on mousepads and desks, but they produce a slight scratching sound on both surfaces. They also have sharp edges and are slightly thinner than average.

The Razer Abyssus Essential has polling rate options for 125Hz, 500Hz, and 1000Hz. You can customize up to 5 CPI settings per custom profile and adjust the lift-off distance from the default setting of 2.4mm using the customization software.

The Razer Abyssus Essential has a left- and right-click button and a scroll wheel button. You can reprogram these buttons using the customization software and even set a Hypershift button which gives you a second layer of possible commands. This requires you to bind one of the buttons as the Hypershift toggle. However, if you have a Razer keyboard, you can use the "FN' key to enable the Hypershift mode on your mouse, which increases the number of total programmable inputs to nine instead of eight. You can also assign a button to cycle between custom CPI settings or different custom profiles.

The scroll wheel is precise and has well-defined steps. It's also quiet and has a grippy rubberized surface. However, the scrolling action and the scroll click feel stiffer than similar gaming mice.

The results for this test were obtained using the maximum polling rate setting of 1000Hz.

The Razer Abyssus Essential uses Razer's Synapse 3 software. It's easy to use, and the settings and options are well-laid out. Unfortunately, there isn't an onboard memory, so there's no way to use your custom settings on computers without the software installed.