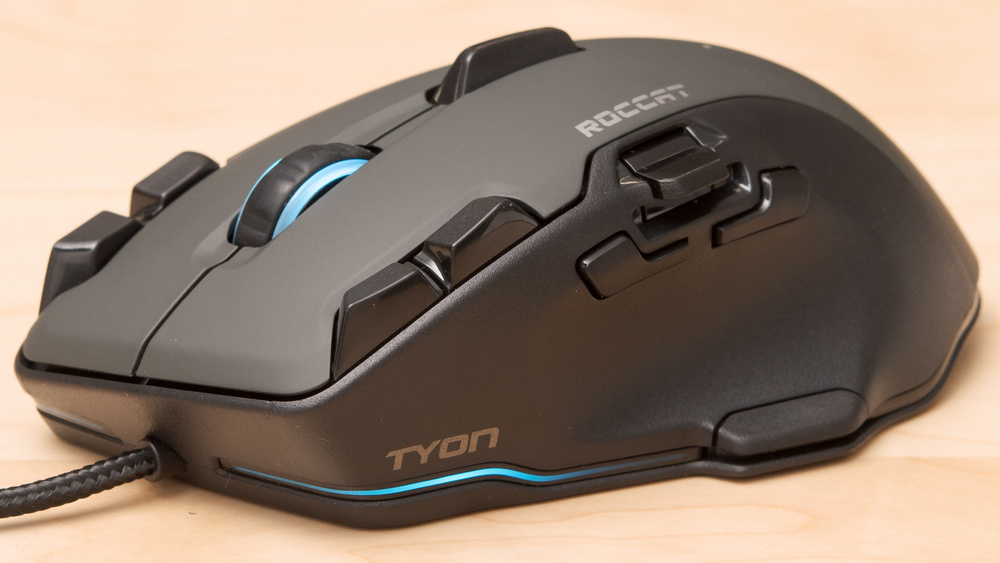 The ROCCAT Tyon is a decent wired FPS gaming mouse. It has a ton of programmable buttons and a slightly slanted, ergonomic design. Its sensor performance is excellent and consistent, with a fairly wide adjustable CPI range and a fairly low click latency that should be fast enough even for competitive gaming. While all the buttons are programmable, unfortunately, we found its software to be quite laggy and buggy. The mouse is quite heavy and large, and those with small hands will likely have a hard time reaching all the buttons in any grip type.

The ROCCAT Tyon is an alright mouse for office and multimedia use. Its slanted ergonomic design is quite comfortable to use, and its large amount of programmable buttons is great to help you quickly navigate through programs. Unfortunately, it's too large for people with small hands, as they'll have a hard time reaching the front buttons.

The ROCCAT Tyon is a decent mouse for FPS games. While it has a low click latency and excellent sensor performance, unfortunately, it's a heavy mouse which may not be ideal for FPS games. Its cable is also quite stiff and may drag on your desk unless you use a bungee. The mouse itself is quite large, and people with small hands will have a hard time reaching all the buttons regardless of grip type.

The ROCCAT Tyon is a very good mouse for MMO games due to its large amount of programmable buttons. While it doesn't have a side panel of buttons like most dedicated MMO mice, it has buttons spread all over the mouse. You can use the companion software to reprogram every button, as well as set a second layer to give you a total of 32 programmable buttons. Unfortunately, the mouse is too big for people with small hands, as they'll have a hard time reaching all the buttons.

The ROCCAT Tyon isn't recommended if you're a fan of ultra-light gaming. The mouse is quite bulky and heavy and isn't nearly as light as some other options.

The ROCCAT Tyon is a bulky and wired mouse that isn't recommended for travel. It's too big to easily toss into a laptop case, and it has a cumbersome wire, making it less than ideal to use in tight spaces like on a plane.

This mouse is available in white or black. While we tested the black version, we expect the performance of the two to be the same.

The ROCCAT Tyon and the ROCCAT Burst Core are both wired gaming mice with significant differences. The Tyon has a right-slanted design and a large number of programmable buttons, including five side buttons. On the other hand, the Burst Core is an ambidextrous mouse that's almost 60g lighter, has much better click latency, a more flexible cable, and improved mouse feet, but it only has two side buttons. The Burst Core is also well-suited for most hand size and grip types, but those with small hands may have difficulty reaching both side buttons with either a fingertip or claw grip. The Tyon isn't suited for small hands using any grip type, and a fingertip grip will likely only be comfortable for those with extra-large hands.

The SteelSeries Rival 500 and the ROCCAT Tyon are both decent wired gaming mice. While both mice are good for medium and large hands for claw grip, the SteelSeries is a better option with palm grip if you have small hands, as you'll be able to reach all the buttons more comfortably. The SteelSeries has a much wider adjustable CPI range and a much lower lift-off distance. Both mice have a ton of programmable buttons and a low click latency.

The Corsair SCIMITAR PRO RGB is a better wired gaming mouse than the ROCCAT Tyon. While both mice are quite heavy, the Corsair has a much wider adjustable CPI range and is much more suitable for small hands in palm or claw grip. The Corsair's software is also fully compatible with macOS.

The Razer DeathAdder Elite is a better wired gaming mouse than the ROCCAT Tyon. The Razer is much lighter, and its slightly smaller body is better suited for small hands if you use a palm grip. It also has a much wider adjustable CPI range. On the other hand, the ROCCAT has way more programmable buttons.

The ROCCAT Tyon is a bulky looking mouse that's available in white or black. We tested the black version which has a two-tone black/dark gray design. It has a fairly large ROCCAT logo on the back, and there's a small strip of RGB lighting along the left side as well as in the mouse wheel. The abundance of buttons gives the mouse a slightly aggressive look. 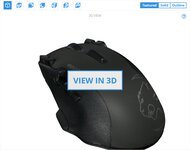 Like most wired gaming mice, it may not be the most suitable for traveling, though it's fine if you only game at home and don't bring your mouse with you anywhere.

This mouse is quite heavy and unfortunately, there's no weight optimization.

This mouse is quite comfortable to use. It has a slightly right-handed ergonomic shape with a thumb rest on the left side. There are a lot of buttons that may get in the way depending on the size of your hand, specifically the tilt button below the mouse wheel.

Good for palm grip for everyone except those with small hands, as they'll likely have a hard time reaching the front buttons positioned beside the L/R click buttons.

Same as palm grip; those with small hands will likely have a hard time reaching the front buttons next to the L/R click buttons.

This mouse isn't designed for fingertip grip, and only those with very large hands will be able to use it like this.

The ROCCAT Tyon is a wired-only mouse.

The cable is fairly stiff and maintains kinks from packaging.

The sensor is slightly higher than center, but this shouldn't be noticeable. Unfortunately, the lift-off distance is very high, so the sensor might move your cursor while you reposition your move. If you want a model with a much lower lift-off distance, check out the HyperX Pulsefire FPS Pro.

The ROCCAT Tyon has a lot of additional programmable buttons. Every button, including the up/down scroll, can be programmed, and you can also set an Easy-Shift[+] button to add a second layer, bringing your total to 32.

The mouse wheel has noticeable increments that are fairly loud. While the wheel itself doesn't have L/R tilt buttons, there's a separate button below the wheel that scrolls horizontally and gives you L/R tilt. If you're interested in a similar gaming mouse with a scroll wheel that lets you change between a 12 or 24-step incremental mode, check out the Dell Alienware AW510M.

The ROCCAT Tyon's click latency is very good. While it isn't as low as some other wired gaming mice, it shouldn't be noticeable even during competitive gaming.

The ROCCAT Tyon's software has a lot of customization options. You can control the RGB zones and set all the buttons. Unfortunately, we found the program to be quite laggy and it stopped responding for a short time every time we hit 'apply'.