Curved vs Flat TVs
Is the Curve Worth It?

Curved TVs are almost extinct in the TV world as of 2021. Although they were easily available in the mid-2010s and Samsung offered a healthy selection, only a handful of models have curved screens now. They were introduced to help offer a more immersive viewing experience, as manufacturers claimed the curved edges allowed the screen to occupy a wider area in your field of vision. However, a curved TV is only beneficial if you're sitting close to the screen and you're the only one watching it, as those watching from the side may see a distorted image.

This article explains the differences between flat and curved screen TVs and their advantages and disadvantages. What it is: Traditional style TV with a flat panel. What it is: Style of TV that features a slightly curved panel to help improve immersion.

There’s an argument to be made for curved TVs on the basis of aesthetics – some people like the look of a curved TV. However, there’s no dramatic difference in the viewing experience when comparing curved and flat TVs for everyday use, and some people may simply prefer traditional flat TVs.

A curved screen can be advantageous if you sit really close, especially if you use it as a PC monitor. On a flat screen TV with narrow viewing angles, the left and right edges appear darker and washed out if you sit too close. However, the curved screen helps bring the edges within your field of vision, so they may not appear as inaccurate.

Winner: Flat screens, but not by much. If you're choosing between a flat and curved screen with the same panel type, and you're going to watch TV with a few people, it's probably better to get a flat screen. 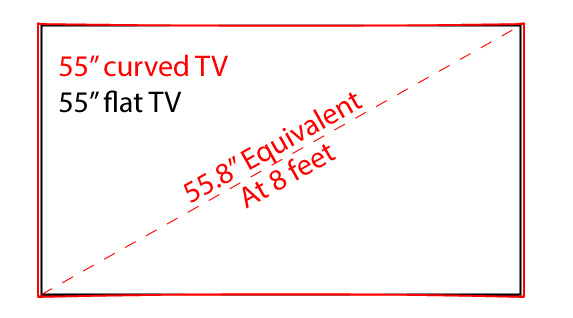 One of the main selling points of a curved screen was that they could fill more of your field of vision, making them appear bigger. Therefore, a 55 inch curved TV would actually look bigger than a 55 inch flat screen. This is true, but only to an extremely small degree. We calculated the difference by comparing two similar TVs: the Samsung UN55MU8000, and the Samsung UN55MU8500. Apart from the curved screen, the two share a similar design, and pretty much identical picture quality. We measured the screens and calculated the field of view for both TVs, assuming a seated position of eight feet away from the TVs. The larger the field of view (FOV), the more the screen fills your vision.

The result was that the flat screen had a FOV of 28 degrees, and the curved screen had a FOV of 28.42 degrees. At that distance of eight feet, that means the MU8500’s curved 55 inch screen looks like a 55.8 inch screen – a very small difference. If you sit closer, then a curved screen may appear bigger, and this is why many curved monitors are still around, but for most people watching TV, there isn't any perceivable difference.

Winner: Curved. The difference is very minor, though, so it's not worth the extra cost.

Learn about our size and distance calculator Due to their shape, flat and curved TVs handle reflections differently. As you can see above, light on the curved TV is 'stretched' across the screen, covering more space. However, reflections are harsher on the flat screen because of how it reflects directly back and doesn't stretch across the screen. Some people may simply prefer the reflection handling on curved screens more, but choosing one over the other really comes down to personal preference. The biggest reason to get a curved TV would be because you enjoy the look of it. One thing to keep in mind, though, is that curved TVs are a bit bulkier in the back. Combined with the difference in shape, this can make mounting a TV to a wall a bit trickier.

Winner: Draw. As aesthetics are mostly subjective, there's no real winner here, but if you want the thinnest TV, go for a flat screen.

As of the start of the 2020s, curved screens are practically a thing of the past. Samsung was the only major retailer to release a curved TV in 2020, and even at that, they only released one model. Their last premium curved TV was the Samsung Q7CN/Q7C QLED 2018, and since then, all of Samsung's QLED models are flat. Curved TVs used to cost a premium over their flat equivalent, but the Samsung TU8300 only costs a bit more than the Samsung TU8000, so there's no real difference between them. If you're buying a TV in 2021, it's more than likely that you're going to get a flat screen.

TV manufacturers once jumped on the hype train of curved screen TVs, but they've since booked a one-way ticket back to the flat screen world. Having a curved screen over a flat screen doesn't offer any real advantage in terms of picture quality, and curved screens are actually a worse choice if you have a wide seating arrangement because you can't see the edges properly from the side. There are a few advantages of a curved screen over a flat, like the screen appearing bigger if you sit close, and reflections not being as strong, but they're minor differences. There are only a handful of curved TVs being released as of 2021, so it's likely your next TV is going to be flat anyways.