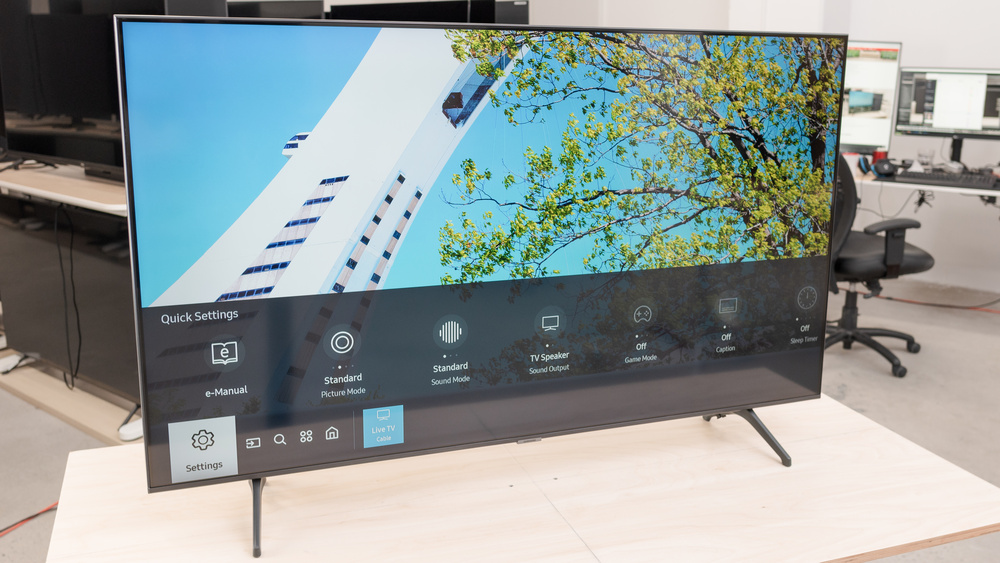 The Samsung TU7000 is an okay entry-level TV from Samsung's 2020 lineup. Sold as the Samsung TU700D at Costco and Sam's Club, it's a budget-friendly TV with okay performance and few extra features. It has an excellent contrast ratio thanks to its VA panel, so it can produce deep blacks that are ideal for dark room viewing. Unfortunately, though, it doesn't get bright enough to overcome glare in well-lit rooms, and its reflection handling is only okay. While it doesn't have variable refresh rate (VRR) support to reduce screen tearing in video games, it has a remarkably low input lag and a fair response time. The TV supports HDR10 and HDR10+ but doesn't get bright enough to make highlights in HDR pop as they should. It also has narrow viewing angles, so the image loses accuracy when viewed from the side.

The Samsung TU7000 is okay for mixed usage. It doesn't perform well in bright environments, but it has an excellent contrast ratio that makes blacks look deep, so it's better for watching movies in the dark. The narrow viewing angles are not well-suited for watching TV or sports with friends since the image loses accuracy from the side. It has a remarkably low input lag for a responsive gaming experience, but sadly it doesn't have extra features like VRR to reduce screen tearing.

The Samsung TU7000 is passable for watching movies. It does a good job of upscaling 1080p content like Blu-rays. It also has an excellent contrast ratio that makes blacks look deep and inky when watching in the dark. Unfortunately, it doesn't have a local dimming feature to improve black levels, and it can't remove 24p judder.

The Samsung TU7000 is decent for watching TV. It has okay reflection handling, but unfortunately, it doesn't get bright enough to overcome glare in well-lit rooms. It also has poor viewing angles, so the image loses accuracy from the side. On the upside, it can upscale lower-resolution content, like cable TV, without issues.

The Samsung TU7000 is an okay TV for watching sports. It has a fair response time and includes a Black Frame Insertion feature to help reduce motion blur. It also has okay reflection handling, but it's best suited for dark to moderately-lit rooms because of its disappointing brightness. Unfortunately, its viewing angles are narrow, so it's not ideal for watching with a group since the image loses accuracy from the side.

The Samsung TU7000 is a good TV for gaming. It's limited to a 60Hz refresh rate, but it has a remarkably low input lag and an okay response time. However, there's still some image duplication during fast-moving scenes because of the backlight flicker. Some gamers may also be disappointed by the lack of VRR support. On the upside, it has an excellent contrast ratio, which is great if you prefer gaming in the dark.

The Samsung TU7000 is mediocre for watching HDR movies. It has a high contrast ratio, which helps with dark room performance, but it lacks a local dimming feature. Unfortunately, it doesn't have a wide HDR color gamut and doesn't get bright enough to make highlights in HDR content pop.

The Samsung TU7000 is decent for HDR gaming. It provides a responsive gaming experience thanks to its low input lag, although the response time is only okay. However, it doesn't provide a satisfying HDR experience because it can't get bright enough to make highlights pop, and it doesn't have a wide color gamut.

The Samsung TU7000 is a decent TV for use as a PC monitor. It has very low input lag, an okay response time, and it can display proper chroma 4:4:4, so text looks sharp and legible. There's also no risk of permanent burn-in from constantly displaying a static desktop interface. Unfortunately, it has narrow viewing angles, so the image looks washed out at the edges if you sit up close.

The Samsung TU7000 has a simple yet excellent design. It has thin bezels on all sides and wide-set feet.

The stand is plastic and supports the TV well, but it still wobbles a bit when nudged. Instead of being screwed on, the stand is simply inserted into the TV, which makes the installation process much easier.

The back of the TV is plastic and has the same etched horizontal texture as other recent Samsung TVs, like the Samsung TU8000. The inputs are side-facing, making them easier to access when the TV is wall-mounted. There are tracks for cable management to guide cables towards the feet and clips to hold them in place.

The bezels are thin and aren't distracting.

The TV is fairly thin and shouldn't stick out when wall-mounted.

The build quality is decent, similar to the Samsung Q60/Q60T QLED. There are no issues with the construction; however, it wobbles a bit.

The Samsung 7 Series has an excellent contrast ratio. It displays deep blacks, which is great for dark room viewing. Unfortunately, there's no local dimming to further improve the contrast. Note that the contrast may vary between units.

This TV has disappointing SDR peak brightness. It's better suited for a dark to moderately-lit room, as it doesn't get bright enough to overcome glare in well-lit environments. The brightness is pretty consistent across different content, except for the 2% window, which is dimmer due to the TV's CE dimming (frame dimming). If you want something that gets brighter, then check out the Samsung TU6980.

We measured the SDR peak brightness after calibration, using the 'Movie' mode. Brightness was set to max, Gamma was set to 2.2, and Contrast was left at its default value.

This TV doesn't have local dimming. The video above is provided for reference only.

We measured the HDR peak brightness before calibration, using the 'Movie HDR' mode. Brightness and Contrast were set to max, and ST. 2084 was left at '0'.

We achieved a peak brightness of 282 nits in the 10% window in the 'Movie HDR' Picture Mode with Contrast Enhancer set to 'High', ST.2048 to '+3' and Brightness and Contrast at their max.

The gray uniformity is okay, but this may vary between units. The edges of the screen are visibly darker, and there's some dirty screen effect in the center. However, uniformity is significantly better in dark scenes.

Our unit has outstanding black uniformity, but this may vary between units. There's only some faint clouding as well as some blooming around the test cross, but it's otherwise very uniform.

Update 07/27/2020: We've retested the viewing angle and the 30-degree anomaly is no longer present. It was likely affected by an external light source during testing.

Like most VA panels, the Samsung TU7000 has narrow viewing angles. The image quickly loses accuracy as you move off-center.

This TV has adequate reflection handling. It performs best in moderately-lit rooms, but it's best to avoid placing it in direct sunlight or opposite a bright source of light. If reflection handling is important to you, look into the LG UN7000.

This TV has decent out-of-the-box accuracy, but this may vary between units. Most colors and shades of gray are slightly inaccurate, and the warm color temperature results in a red/yellow tint. Gamma follows the target fairly well, but dark scenes are too dark and other scenes are slightly over-brightened. If you don't plan on getting your TV calibrated and want amazing color accuracy, check out the TCL 4 Series/S434 Android 2020.

After calibration, the color accuracy is outstanding. There are still some inaccuracies with reds and blues, but white balance is nearly perfect, and so is the gamma, though dark scenes are still too dark. The color temperature is much closer to our target of 6500K.

1080p content looks good and there aren't any signs of upscaling artifacts.

Native 4k content is displayed perfectly, without any issues.

This TV uses a BGR subpixel layout, which can affect the way text is rendered when using the TV as a PC monitor. You can read about it here.

Update 02/05/2021: We updated the TV's firmware and retested the EOTF. The TV didn't get significantly brighter, but the EOTF does a bit better job at follow the target curve, so HDR scenes aren't as dark as they were before the update. There's still frame dimming and it can be improved by setting Shadow Detail to '5' as seen in this EOTF. The review has been updated to include the 'Game' and 'Make HDR Brighter' EOTFs.

The Samsung TU7000 has an okay color gamut, but it's not considered a wide color gamut for HDR content. In 'Movie' mode, the EOTF doesn't follow the curve well and most scenes are a bit too dark. The 'Game' mode EOTF is better, except some really dark scenes are still a bit too dark.

If you want to make HDR content appear brighter overall, set Brightness and Contrast to max while in 'Movie' mode, then set Contrast Enhancer to 'High', and ST.2084 to '+3'. These settings result in this EOTF.

The Samsung 7 Series has mediocre color volume. It's mostly limited by the lack of a wide color gamut, but it can display dark colors well thanks to its excellent contrast ratio.

This TV has great gradient handling. Most of the banding happens in the darker shades of gray and green. Although enabling Noise Reduction doesn't do much to improve the performance on our test pattern, it can help in certain content. That said, enabling it may cause the loss of some fine details in some scenes.

This TV doesn't exhibit any signs of temporary image retention, but this may vary between units.

We don't expect VA panels to experience burn-in, as the VA panel in our long-term test appears immune. 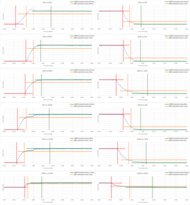 The Samsung TU7000 has an okay response time, but it's slightly slower than the Samsung TU8000. It overshoots in dark transitions, which results in some motion artifacts in dark scenes. Also, there's image duplication due to the backlight's 120Hz flicker. 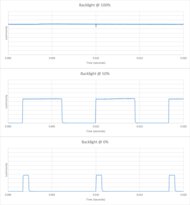 This TV uses Pulse-Width Modulation (PWM) to dim its backlight. It flickers at 120Hz on all modes unless you set the Brightness to its max in the 'Game' or 'Movie' Picture Mode, at which point it becomes flicker-free. It's also flicker-free if you're in 'PC' mode with the Picture Mode set to 'Dynamic' and Brightness at its max.

The Samsung TU7000 has a Black Frame Insertion feature to help improve the appearance of motion, but it doesn't perform well. The backlight flickers at 60Hz when LED Clear Motion is enabled, but the bad crosstalk results in visible image duplication. It always flickers at 120Hz in 'Game' mode with the backlight set to any level below its maximum, and once again, image duplication is noticeable due to the TV's 60Hz refresh rate.

This TV can interpolate lower-frame rate content up to 60fps, known as the 'Soap Opera Effect'. It looks bad on our test pattern because of the backlight's 120Hz flicker; however, it's not as distracting in regular content. There are some minor artifacts, but it works well overall with most content.

See here for the settings that control the motion interpolation feature.

Due to the TV's slightly slower response time, there isn't much stutter in lower frame rate content. It can still happen from time to time, and if you're bothered by it, enabling Picture Clarity can help.

This TV can't remove judder from any source.