By Sam Vafaei
What it is: How accurately the sound level of each frequency is being produced.
When it matters: For a balanced and neutral sound.
Score components:
Score distribution

Frequency response is a measure of the magnitude of the output of a system compared to its input, as a function of frequency. In other words, it describes how accurately a system reproduces each frequency of audio content, in terms of amplitude. For example, for an input signal that has three frequencies of equal amplitude (say, 100Hz, 1KHz, and 10KHz, all at -6dB FS), a TV/speaker with a neutral frequency response would output a signal that, just like the input, has equal amplitudes at 100Hz, 1KHz, and 10KHz.

We measure the frequency response of TVs from 20Hz to 20KHz, at 70dB SPL, 80dB SPL, and Max SPL (i.e. the TV is set to maximum volume). The results are then broken down for evaluation into low-frequency extension, response error @ 70, 80, & Max, dynamic range compression, and maximum loudness.

Frequency response is the most important part of audio reproduction. For the most part, the perceived subjective sound quality of a speaker can be predicted from its frequency response1,2,3,4. It describes how accurately a system reproduces each frequency of audio content in terms of amplitude. A TV with a good sound has an extended bass, a neutral frequency response and can reproduce the audio content at high-intensity levels without compression or pumping artifacts. That is, if the music was mixed to sound bass-heavy, a good TV will reproduce it as bass-heavy. Conversely, if the content is supposed to sound bright, a TV with a neutral frequency response will reproduce it as bright, and at loudness levels proportional to the size of the TV and its optimum viewing distance.

Having a good frequency response is important for all TVs, regardless of their use case, since it has the largest effect on their perceived sound quality. However, the role of frequency response is more crucial for some use cases such as watching movies, compared to watching the news or TV series where frequency response may not be as crucial. Most TVs available today suffer from a lack of bass, low volume, and pumping and compression artifacts under heavy loads. 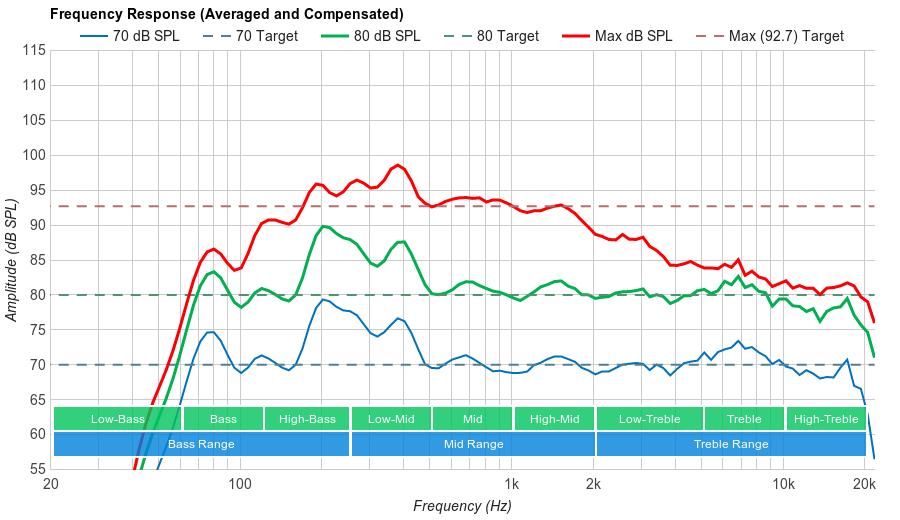 TVs are tested under their factory settings. If the TV comes with a room correction system, it is used to calibrate the sound prior to the measurements. The test signal for our frequency response measurements is a 16-bit/48KHz 20-second sine wave swept at -6dB FS (RMS) between 10Hz and 22KHz. The TV is placed on a table, as close as possible to the back wall, and is connected to the test PC through HDMI. The measurements are recorded using a calibrated Dayton Audio EMM-6 microphone, placed at the optimum viewing distance for each TV's size, and is connected to a Focusrite Scarlett 2i2 audio interface. The signal level is calibrated post-compensation (i.e. after being flattened by applying the target response) using a pink noise limited between 500Hz and 2KHz. The resulting sound pressure level is measured and calibrated with a GalaxyAudio CM-140 SPL meter, which is set to C-weighting and Slow. 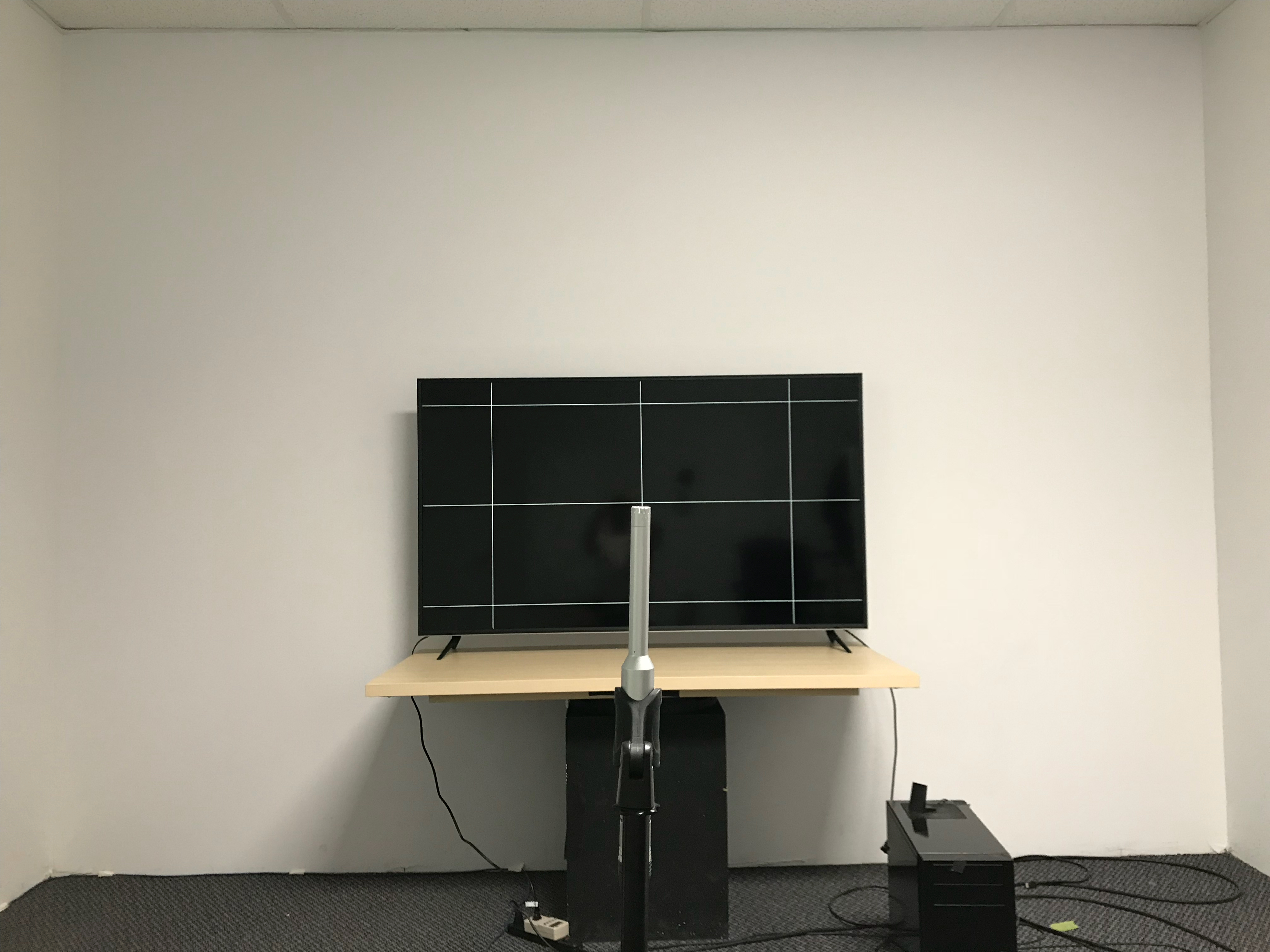 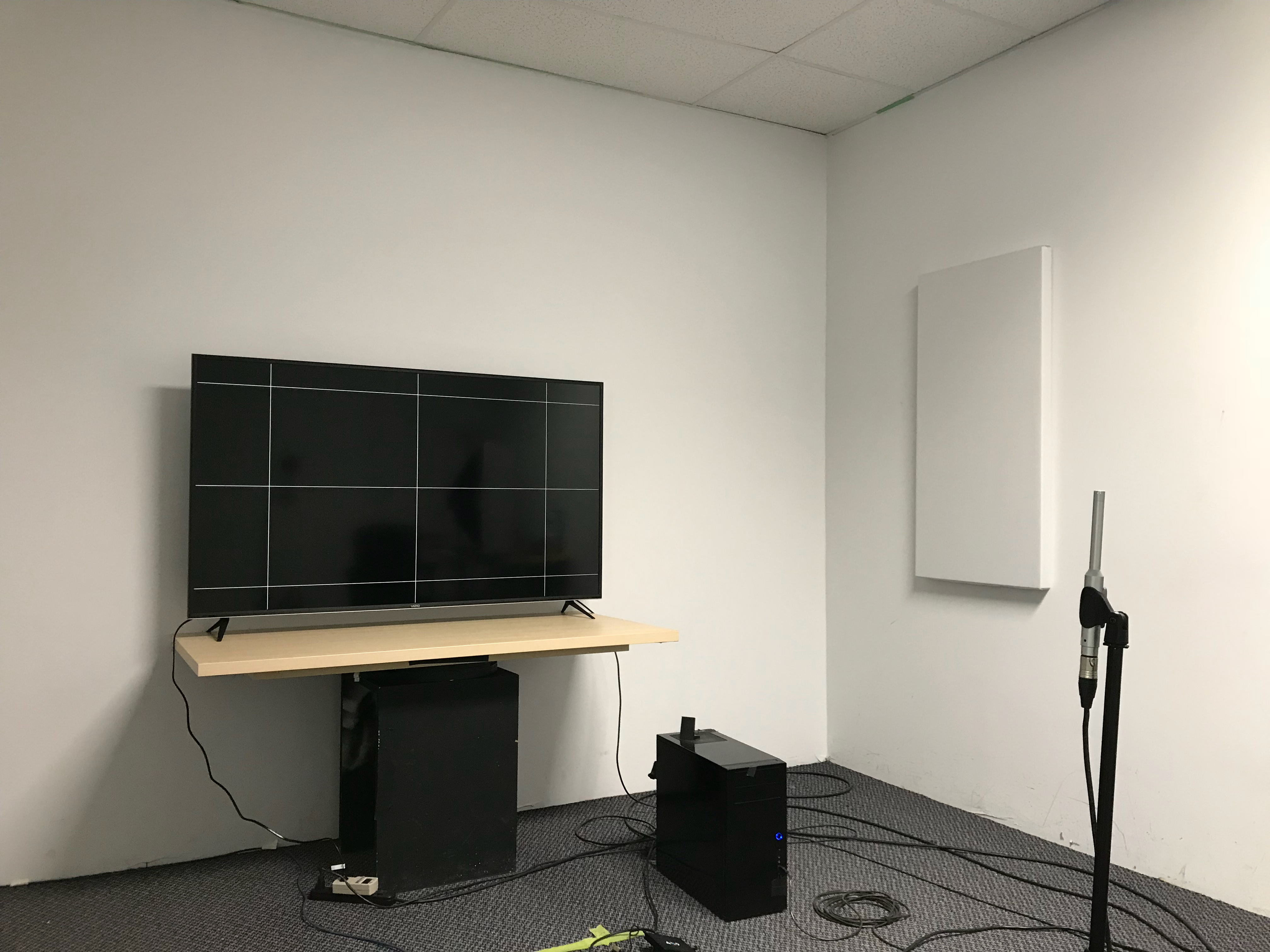 Our reference for the ideal TV frequency response is the loudspeaker. For loudspeakers, it is widely accepted that the ideal response is a flat frequency response measured with a measurement microphone, on-axis, in an anechoic environment. There have also been studies done on the preferred in-room response of loudspeakers, most notably by Harman5,6. It concluded that the preferred in-room loudspeaker response is a smooth curve from 20Hz to 20KHz with about a 9-10 dB downward tilted slope and that a flat in-room response for a loudspeaker will sound too bright and thin. In general, if a loudspeaker has a flat on-axis response in an anechoic setting, its treble won't need any adjustments, but the interactions between the speaker and the room in the bass range should be dealt with7.

The target for our TV measurements is based on the Harman in-room loudspeaker response and has a 9dB downward slope from 20Hz to 20KHz. Also, due to the large variance in the shape and size of rooms and their big impact on a TV's in-room response, we believe that all TVs should come with a room correction system. This is why we test the sound of TVs in a regular room and expect the TVs to correct for the modes of our test room. The result of such measurements would better correspond to the actual experience that the consumer would have with their TV, compared to measurements done in an anechoic setting.

The smoothing used in our plots and calculations is 1/3 Octave since this amount of smoothing removes the fine fluctuations in the frequency response caused by room reflections, making the graphs easier to read while preserving the majority of details that are audible to humans. The next step in evaluating the frequency response of a TV is "flattening" it by applying the target curve to it, and then, each pass is level-matched to its corresponding SPL (70dB, 80dB, and Max) between 500Hz and 2KHz. That is, the overall level of the TV's frequency response is adjusted between 500Hz-2KHz in such a way that its average value equals to 70dB, 80dB, and the corresponding Max SPL level. The level-matching is not done full-range in order to remove the influence of room interactions from the process.

What it is: The lowest frequency at which the frequency response reaches -3dB of the target response.
When it matters: Movies, gaming. Shows how extended the bass is.
Good value: < 60Hz
Noticeable difference: 10Hz
Score distribution

Low-frequency extension (LFE) is calculated on the 80dB pass, post-compensation, as the lowest frequency where the TV's frequency response reaches -3dB of our target. It can be considered as a metric for how extended and deep the bass of a TV is. At the moment, 70dB SPL and Max SPL passes are not considered in the LFE calculations in order to reduce the effects of noise floor and compression/pumping on the process.

LFE values of 60Hz and lower should be considered good, especially for a TV, since an extended bass is not needed for producing natural dialogs. A TV with an LFE of 200Hz doesn't produce any bass and will sound quite thin. Extending the LFE down to 120Hz adds significant warmth to the sound, but still no thump or punch. A TV that has an LFE of around 60Hz does have body and punch to its bass, but still lacks thump and rumble, which is produced in the sub-bass region. Also, frequencies below 40Hz, which correspond to thump and rumble, are mostly felt as tactile sensations than heard as musical tones. However, we have noticed that a few electronic genres and some movie soundtracks may have relevant information down to even 10Hz. Therefore, a large dedicated speakers/soundbars or a dedicated sub-woofer is recommended whenever a deep bass is desired. 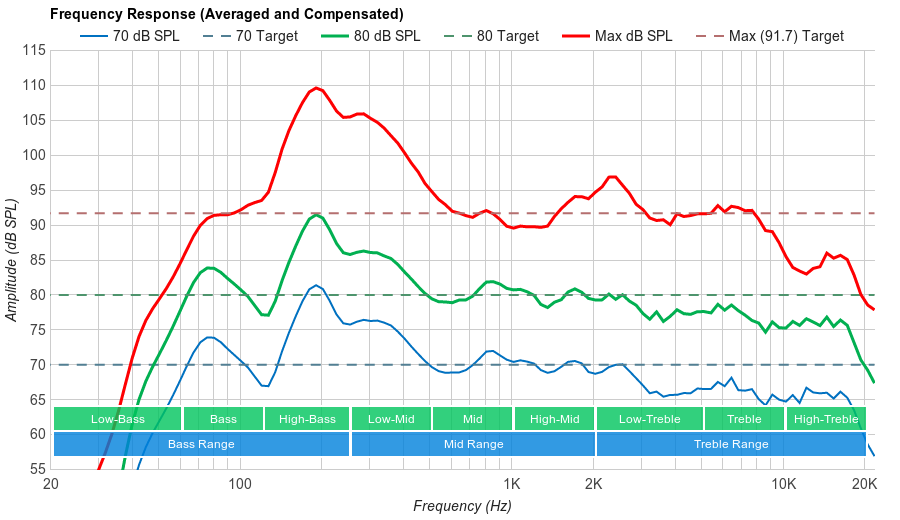 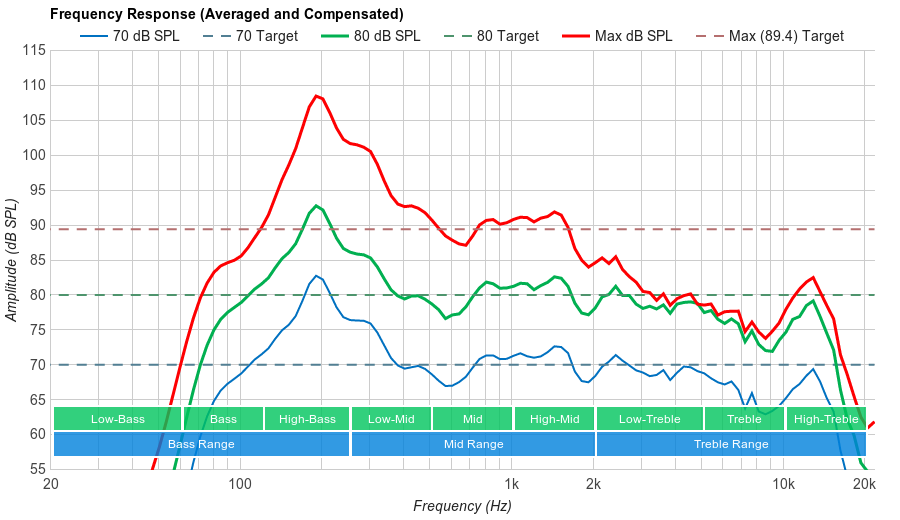 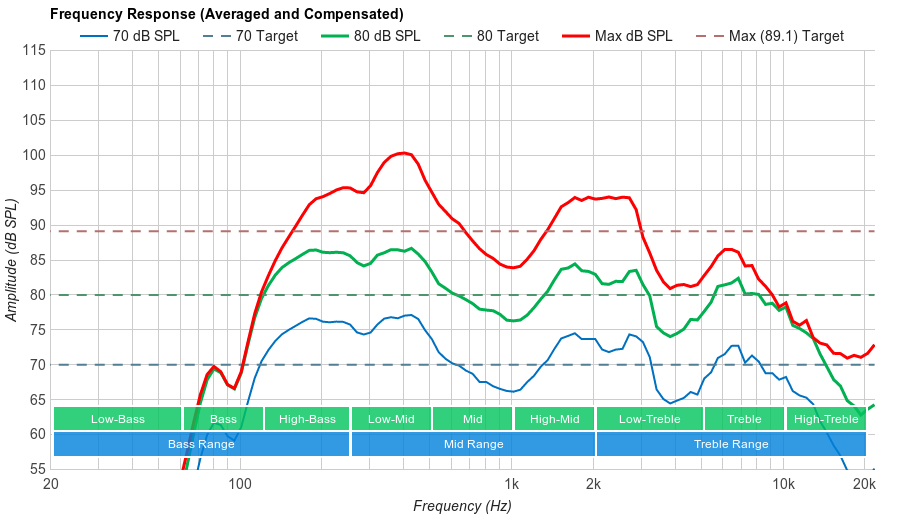 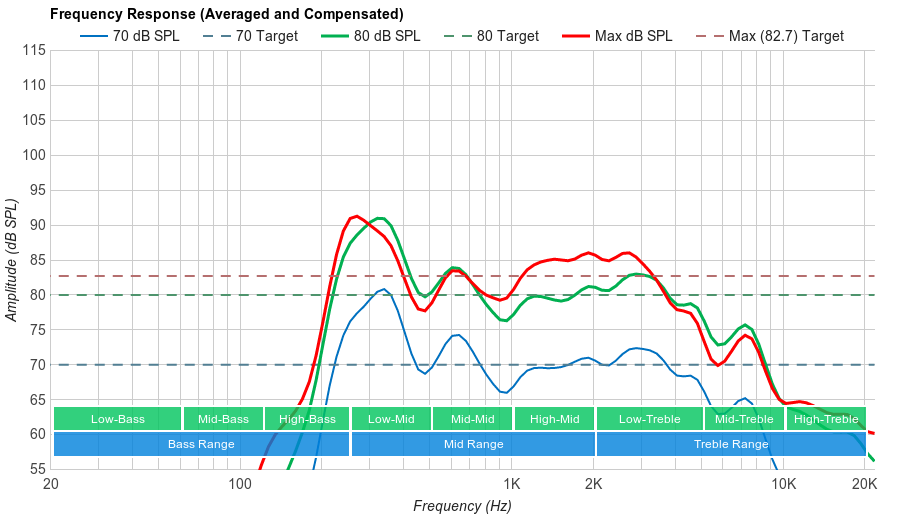 What it is: The amount of deviation (weighted standard deviation) in frequency response measured at 70dB SPL, as compared to a target response that would sound perfectly balanced to most people.
When it matters: Shows the TV's frequency response at quiet listening levels.
Good value: < 4 dB
Noticeable difference: 0.5 dB
Score distribution

Std. Dev. values of smaller than 4dB should be considered good. A TV with low error in its frequency response produces a smooth and relatively flat curve. Typically, TVs don't produce any sub-bass and lack quite a bit of mid-bass. This results in a sound reproduction that doesn't have any thump or rumble and lacks quite a bit of body and punch. The bump between 200Hz and 300Hz that shows up in most of our TV frequency response measurements is actually one of the room modes of our test environment. As mentioned before, we believe that all TVs should come with a room correction system so they can adapt to the acoustics of the rooms they are placed in. The 200Hz - 300Hz bump tends to thicken the dialogs and add clutter to the music. In extreme cases, it may even have a negative effect on the intelligibility of dialogs. Peaks in frequency response between 1KHz - 4KHz increase the detail and projection of dialogs, and dips can have a big negative impact on speech intelligibility. 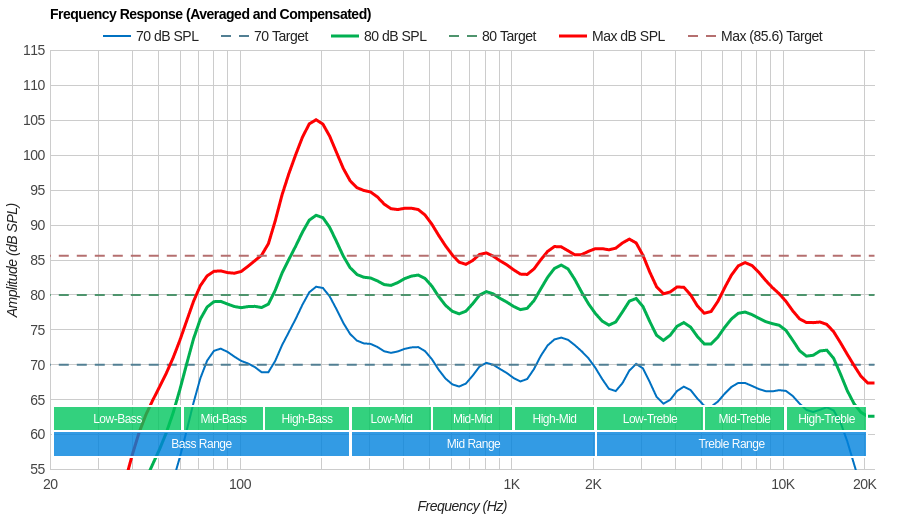 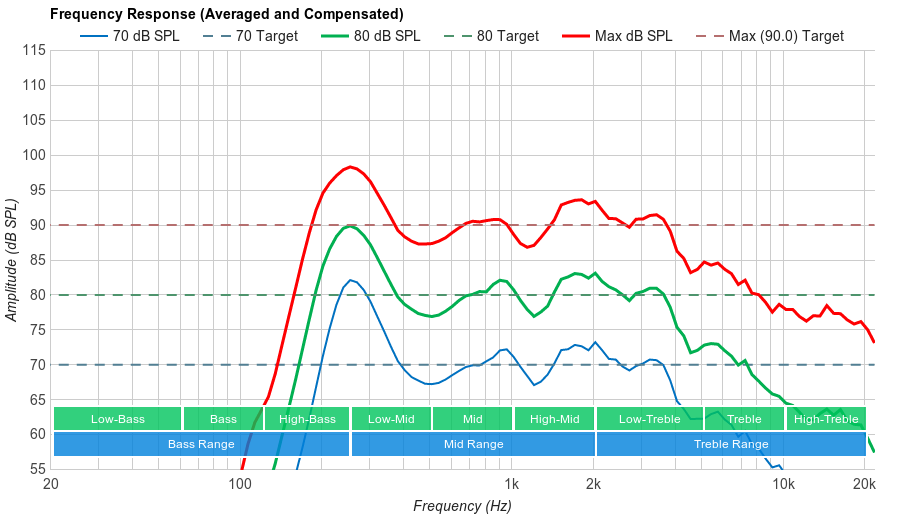 What it is: The amount of deviation (weighted standard deviation) in frequency response measured at 80dB SPL, as compared to a target response that would sound perfectly balanced to most people.
When it matters: Shows the TV's frequency response at moderate listening levels.
Good value: < 4 dB
Noticeable difference: 0.5 dB
Score distribution

The standard deviation for the 80dB pass is calculated the same way as the 70dB pass, but with the TV calibrated to 80dB SPL.

What it is: The amount of deviation (weighted standard deviation) in frequency response measured with the TV at maximum volume, as compared to a target response that would sound perfectly balanced to most people.
When it matters: Shows the TV's frequency response at under maximum load.
Good value: < 4 dB
Noticeable difference: 2 dB
Score distribution

The standard deviation for the Max SPL pass is calculated the same way as the 70dB pass, but with the TV set to maximum volume.

What it is: Maximum volume reached by the TV at their optimum viewing distance (size dependent).
When it matters: For listening to loud audio.
Good value: > 88 dB
Noticeable difference: 2 dB
Score distribution

This test records the sound pressure level that the TV was capable of producing at the optimum viewing distance and at maximum volume. The test signal for this measurement is the same as our calibration signal (pink noise limited between 500Hz-2KHz). The measurement for this test is performed when the TV is being calibrated for the Max SPL pass. The TV level is calibrated post-compensation (i.e. after being flattened by applying the target response) with a GalaxyAudio CM-140 SPL meter, which is set to C-weighting and Slow.

A TV that gets loud enough for most use cases measures above 88dB SPL at optimum viewing distance for its size. This means dialogs is still easily understandable even in a loud environment (i.e. a relatively noisy office). For uses in a quiet room, the majority of TVs should be considered good enough. But for some other use cases, like sports viewing, it is crucial to have a TV that can get quite loud. 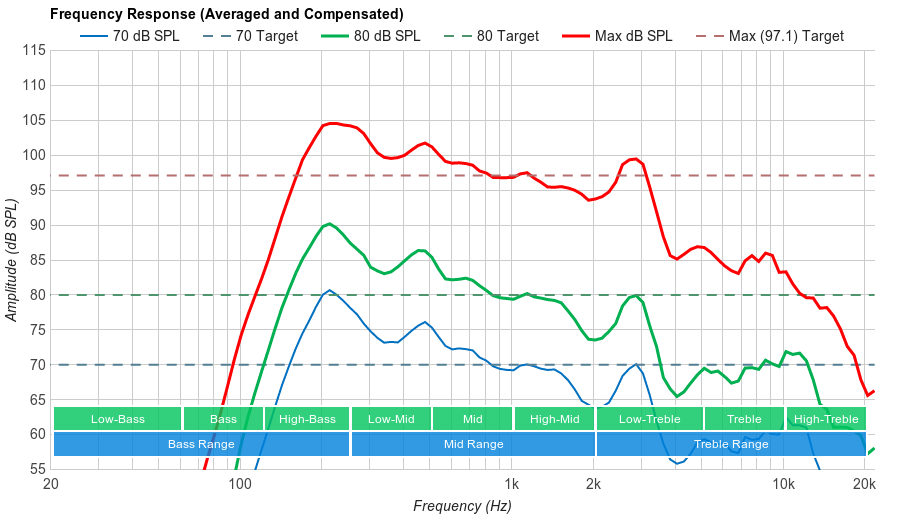 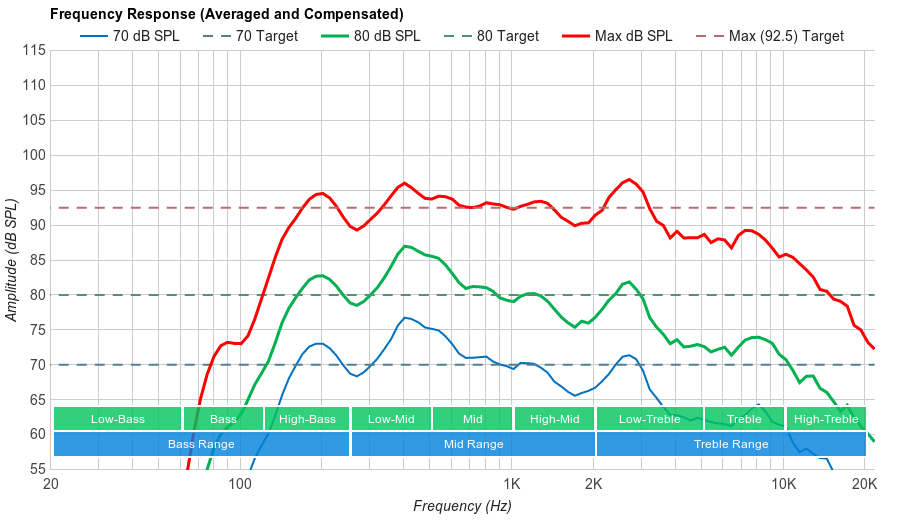 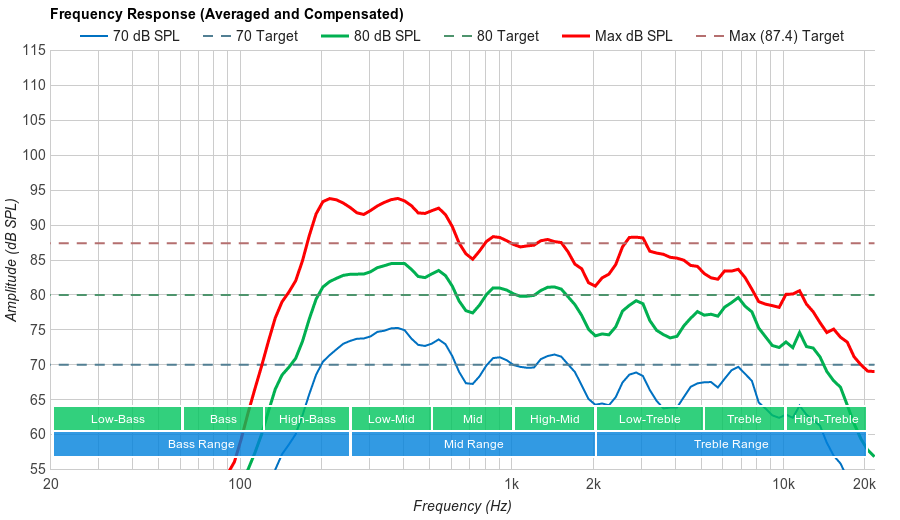 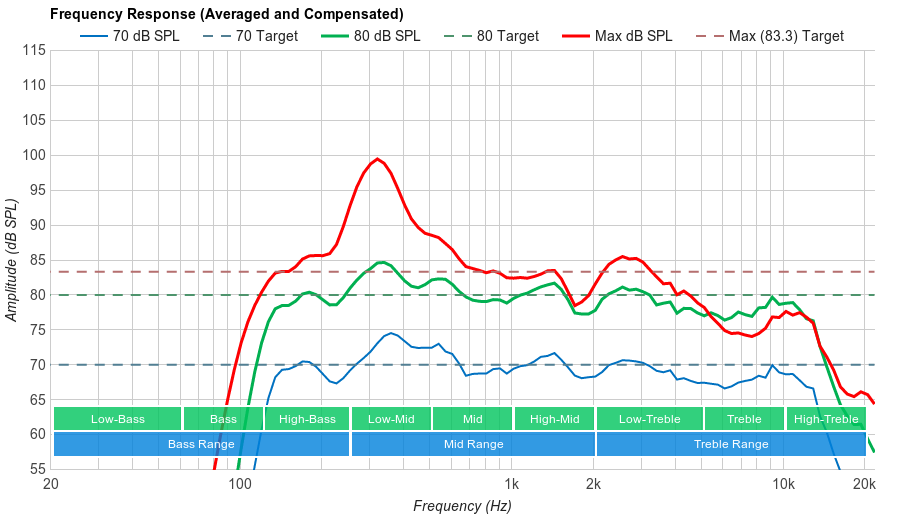 What it is: The amount of difference between the TV's frequency response performance at 70dB SPL and Max dB SPL. Too much compression will result in pumping in the sound.
When it matters: When an accurate and free-of-pumping performance is required at higher volumes.
Good value: < 3dB
Noticeable difference: 0.5
Score distribution

This test compares the frequency response of the TV at 70dB SPL, to its response at Max SPL. The actual value is derived by subtracting the 70dB curve from the Max SPL response and then calculating the standard deviation of the resulting difference curve. Most TVs struggle under loud volumes due to the size of their speakers, and one of the ways this affects the sound is by producing pumping and compression artifacts. That is, the TV won't be able to produce the same frequency response at Max SPL that it did at 70dB SPL, which shows as a drop in level in the bass and treble region.

A TV with a DRC lower than 3dB should be considered good in this regard. Higher DRC values suggest audible pumping and compression artifacts, and a change in the sound profile of the TV towards a muffled and muddy reproduction. This is one of the areas that TVs consistently underperform compared to dedicated speakers, as this level of dynamic range compression is quite hard to find on them. 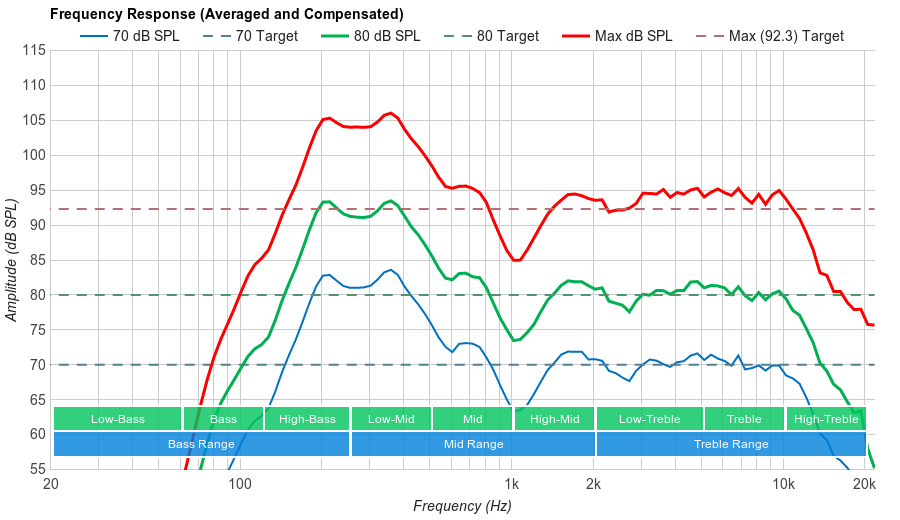 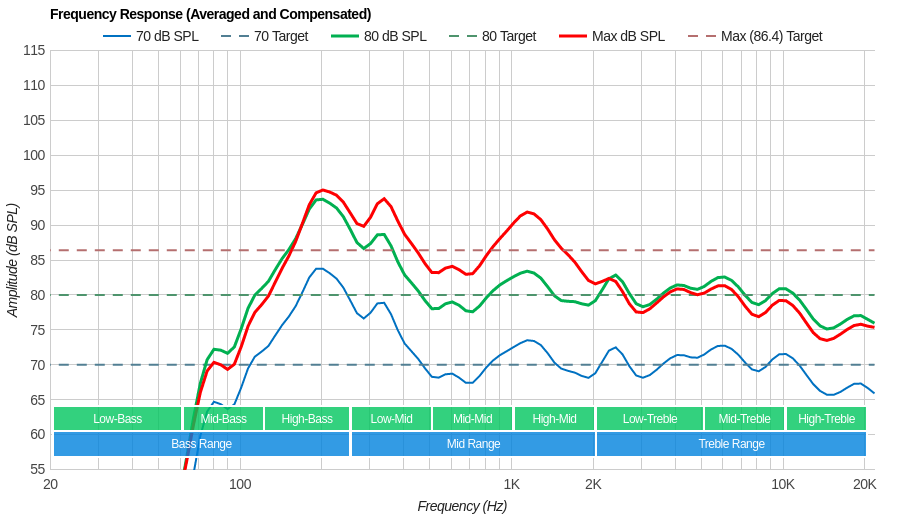 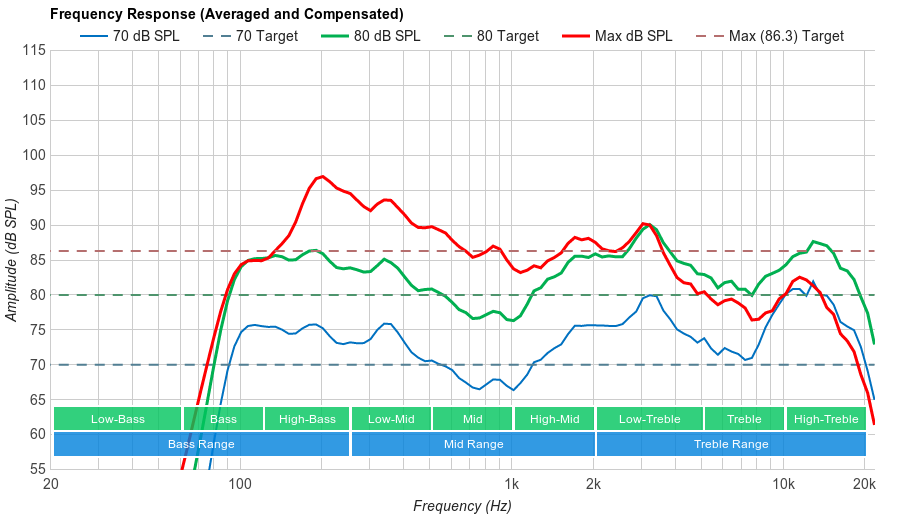