A TV's viewing angles tell us when an image starts to look inaccurate when viewing off-center. Whether we've realized it or not, an image looks different when we view our TV from the side, and some TVs retain image accuracy at an angle better than others. If you need a TV that looks good from various positions in a room with a wide seating arrangement, wide viewing angles are very important. However, if you sit directly in front of the TV, viewing angles aren't as important to you.

If you usually watch TV alone from directly in front, you most likely don't need a wide viewing angle. You should just turn the television to face you directly. However, if you watch TV with multiple people in a wide seating arrangement, you should benefit from wide viewing angles as those viewing off-center still see an accurate image. 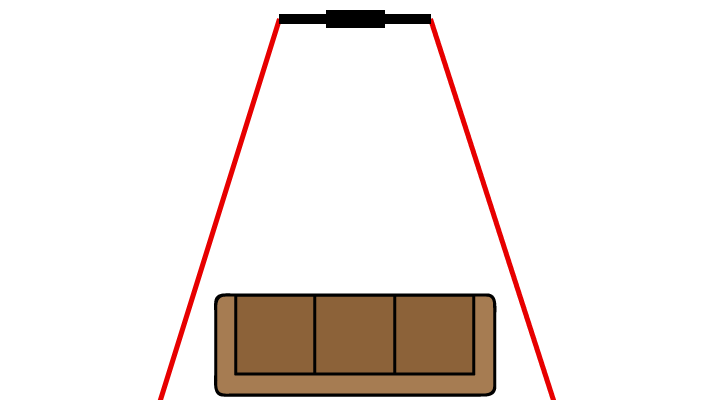 Any TV will do 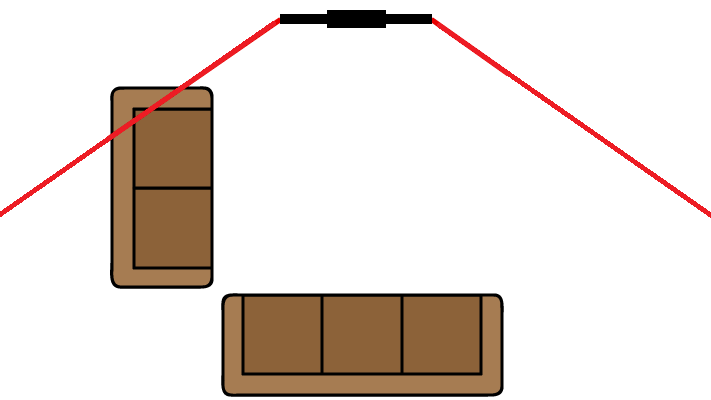 Also, viewing angles have an effect if you sit very close, and in particular if you use the screen as a computer monitor. If you sit too close to the screen of a TV with narrow viewing angles, the edges of the screen might look darker and washed out. If it has wide viewing angles, however, the image remains accurate no matter where you sit.

There are a few competing TV technologies and panel types that each present their advantages and disadvantages regarding viewing angles. For LED-backlit LCD TVs, the LCD panel technology used is a big determining factor for how well a TV retains picture quality at an angle. There are two main types used in TVs: IPS and VA, and the differences between each panel type are noticeable; you can learn more about them here.

IPS panels are superior to VA panels when it comes to viewing angles. They're generally recommended for wide seating arrangements because the image remains accurate when viewing from the side. On the other hand, the image on a VA panel quickly loses accuracy as you move off-center, and it can get pretty noticeable when sitting at a wide angle. This doesn't mean IPS panels are perfect, however, as they have a lower contrast ratio than VA panels, so choosing one type over the other is a trade-off between viewing angles and contrast.

OLED is a different technology that uses self-emissive pixels. Each pixel turns itself on and off and emits light in all directions. This means that OLEDs have very wide viewing angles, even better than IPS panels, and they also have a near-infinite contrast ratio. Our viewing angle measurements represent how wide of an angle a TV can be viewed from before the picture quality begins to visibly decrease. For the video, we display an image on the screen, film the TV from a fixed position, and rotate it so that we capture it 70 degrees to the right. This video is for reference so that we can see what the TV looks like, and it doesn't affect the final results.

In terms of the actual test results, we use a Colorimetry Research CR-100 Colorimeter that's calibrated to the TV, and it measures the color, brightness, black level, and gamma at different angles. The results and graphs are automatically generated in the Octave software.

Our viewing angle video demonstrates the comparative quality of a TV’s viewing angles played at different angles. If you want to get an idea of what a TV looks like at wide viewing angles, this video should help. Below are four examples with different panel types and technologies: an IPS TV (Sony X800H), VA panel (Hisense H9G), VA panel with viewing angle technology (Samsung Q80/Q80T QLED), and an OLED (LG BX).

What it is: The angle at which some colors drop to 80% of their original chroma.
When it matters: When viewing colorful content from the side.
Good value: > 45°
Noticeable difference: 10°
Score distribution

Color washout is when colors start to lose their chroma, or when they lose their saturation. If you're looking at a standard blue color, it loses its chroma when it starts to look blue/gray and no longer the same color. To test for color washout, we measure pure red, blue, and green, and we measure the angle at which each color drops to 80% of its original chroma. These graphs aren't very difficult to read; the x-axis represents the viewing angles and the y-axis represents the color's chroma. The horizontal line represents 80% of the original chroma and colors lose their chroma when they drop below that line.

For the rest of the article, we're going to compare the Sony X800H (IPS) and the Hisense H9G (VA) and their individual results. The differences are more noticeable than if we compare them with a VA panel that has viewing angle technology or an OLED. As you can see below, colors start to washout a lot quicker on the Hisense than the Sony.

What it is: The angle at which some colors hue shift by 3° (meaning they change color, such as becoming more blue-ish).
When it matters: When viewing colorful content from the side.
Good value: > 45°
Noticeable difference: 10°
Score distribution

For the color shift, we use the same measurements as the color washout but instead look at the hue, which defines how close a color is to one of the six main colors: red, orange, yellow, green, blue, and purple. A hue shift happens when a color starts to appear either more red or more blue, depending on which end of the color spectrum it's moving towards. Hue is measured in degrees, and a three-degree change is considered a color shift.

The graph is a bit different from color washout; there are two horizontal lines that represent the three-degree color shift. The color changes hue when it passes these lines. As seen below, colors quickly lose their hue on the Hisense, but they remain the same even at very wide angles on the Sony.

What it is: The angle at which the TV's lightness drops to 75% of its original lightness.
When it matters: When viewing any content from the side.
Good value: > 45°
Noticeable difference: 10°
Score distribution

Contrary to what the name suggests, we don't actually measure if the TV loses brightness and becomes dim in this test, but rather how much lightness it loses. In other words, we want to know at which angle the image starts to appear darker. We measure the lightness using six test slides: pure black, 20% gray, 40% gray, 60% gray, 80% gray, and pure white, and we measure each slide at various angles. The pure white slide has a lightness measure of 1.0, while pure black is 0.0, and we want to see when the lightness of any of the slides drops to 75% of its original value.

As you can see, the image retains its brightness at wider angles on the Sony than the Hisense. Pure black actually becomes lighter on the Hisense at very wide angles, meaning it's not pure black anymore. What it is: The angle at which the black level doubles its lightness, leading to dark shades looking washed out.
When it matters: When viewing dark content from the side.
Good value: > 45°
Noticeable difference: 10°
Score distribution

Black level defines how bright the screen is when displaying the pure black slide from the brightness loss test. An OLED has a black level of 0 because each pixel is individually turned off, and an LED TV with a VA panel has a very low black level because it's not emitting much light. However, a high black level means that blacks look gray because there's still light emitting out, and this is typical of IPS panels. The black level raise measures when the black level doubles its lightness, causing blacks to appear gray. Between the Sony and Hisense, the Sony's black level doesn't change much even at 70 degrees, while the black level on the Hisense doubles at 20 degrees off-center.

Gamma defines the brightness of shades of gray. Having a TV with a proper gamma is important for scenes or games with shadows. A high gamma causes the image to appear too dark, while a low gamma results in a bright image. Using the same grayscale slides from the brightness loss test, we want to see at which angle the grays start to change. Looking at the graphs above in brightness loss, you'll notice there are dotted lines, and these represent the ideal gray value relative to pure white and pure black. If the grays start to deviate from the dotted lines, it means the gamma is shifting. As you can see, the Sony maintains gamma stable for wide viewing angles, while the Hisense starts to shift at narrow viewing angles and 20% gray starts to look like 40% gray.

Unfortunately, you can't do anything to improve the viewing angles on a TV. If you have a wide seating arrangement, consider getting an OLED or an IPS panel TV. If you already have a VA panel TV and notice that the image looks inaccurate when viewing from the side, try moving the seating area as far back as possible. The narrow viewing angles aren't as noticeable at a distance because you won't be sitting at such a wide angle from the TV.

A TV's viewing angles are something that we can all test with our own eyes at home. Simply walk around your TV and see if the image starts to change when moving off-center. If it changes, it means you have narrow viewing angles, but if it stays the same, the TV has wide viewing angles. Our tests are more objective than just walking around the TV, but it helps determine if a TV is good for your seating arrangement. Some panel types are better than others when it comes to viewing angles, but if you don't have a wide seating arrangement and sit directly in front of the screen, you can get whichever TV you prefer.