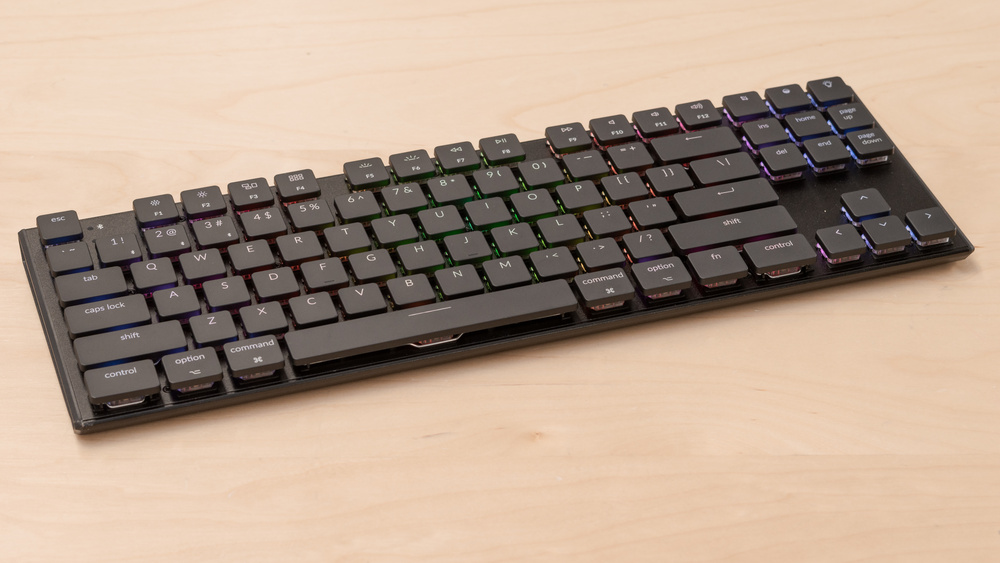 The Keychron K1 is a decent wireless mechanical keyboard for most uses. It's made largely of aluminum, giving it a sturdier feel and an overall comfortable experience. Our unit has Gateron Low Profile Red switches that don't require a lot of force to actuate and have a low pre-travel distance, resulting in a responsive typing experience. Unfortunately, the latency is only decent over a wired connection and terrible over Bluetooth. Also, there's no companion software to customize the RGB lighting, and there aren't any macro-programmable keys. On the upside, you can use it wirelessly over Bluetooth and pair it with up to three devices at the same time.

Note: Some variants of this keyboard can be difficult to find through retailers, but they can be purchased directly from Keychron's website.

The Keychron K1 is a decent keyboard for gaming. The Gateron Low Profile Red switches don't require a lot of force to actuate and have a low pre-travel distance. It has a great build quality, with most of the keyboard being made of aluminum with little to no flex. However, there's no companion software or macro-programmable buttons. The latency is only decent, which may not be ideal for competitive gaming.

The Keychron K1 is a great keyboard for using with your smartphone or tablet. You can pair it over Bluetooth with your mobile device and it can be paired with up to three devices at once. While it's a fairly light keyboard, it's also rather wide, making it less than ideal to travel with.

The Keychron K1 is a satisfactory keyboard for office use. Ergonomics are only decent, as it lacks a wrist rest and there are no incline settings. While the switches help provide a responsive typing experience, the flat ABS keycaps are slippery and are bunched together, which can lead to an increase in typos.

The Keychron K1 is a satisfactory keyboard for programmers. While it offers a decent typing experience due to the responsive switches, the keycaps are made of ABS plastic that feels cheap and they're prone to feeling slippery. Also, it doesn't have macro-programmable buttons. That said, it has a solid aluminum frame and full RGB backlighting which can be modified via a button directly on the keyboard.

The Keychron K1 is only okay for use with a home theater PC. It's wireless, so you won't need to worry about a keyboard wire in your setup. Also, it has media keys and backlighting. However, it doesn't have an integrated trackpad like some dedicated HTPC keyboards.

We expect these results to be valid for the other variants, aside from typing experience. The label for our unit can be seen here.

The Keychron K1 is a TenKeyLess keyboard that's ideally suited for typing on your tablet or smartphone. Despite having no incline settings or wrist rest, it's a comfortable keyboard to type on when compared to the Keychron K4, which has a higher profile. It can be used wirelessly over Bluetooth, just like the Logitech MX Keys, but the K1 has full RGB backlighting while the Logitech only has a white backlight. It's also cheaper than the Logitech G915 LIGHTSPEED, another low-profile mechanical keyboard that uses similar switches.

For other options, you can also check out our recommendations for the best RGB keyboards, the best wireless keyboards, and the best mechanical gaming keyboards.

The Keychron K1 and the Keychron K3 are both great gaming keyboards, but the K1 has a TenKeyLess layout whereas the K3 has a compact 75% layout. Otherwise, they have very similar features, although the K3 has a lower latency over Bluetooth. It also has a Caps Lock indicator light, which the K1 lacks. The K3 is available with many different switches, including optical ones, so you have a wider range of options to choose from. Neither keyboards have software to customize the backlighting or set macros.

The Keychron K2 (Version 2) and the Keychron K1 are both compact wireless keyboards, but the K1 uses low-profile switches, whereas the K2 uses standard switches. Also, the K1 is slightly longer since it has a TKL layout instead of a compact 75% like the K2. The tactile Gateron Brown switches on our K2 unit offer a better typing experience than the linear Gateron Low Profile Red switches on our K1 unit. While K2's wired latency is marginally worst than the K1, its Bluetooth latency is significantly better. Neither come with customization software.

The Keychron K4 is better than the Keychron K1 for most uses, but you should get the K1 if you prefer low profile switches and RGB backlighting. If you prefer having a Numpad, you should go with the K4. Also, the K4 has a much lower latency over both wired and Bluetooth connections, and it doesn't have any function issues with Windows or macOS like we had on the K1.

The Logitech G915 LIGHTSPEED and the Keychron K1 are both low-profile, wireless mechanical keyboards, but they're designed with different uses in mind. The Logitech is a full-sized gaming keyboard with dedicated macro and media keys and companion software to customize its settings. It also has much lower latency, which is great for gaming. That said, the Keychron is a smaller, TenKeyLess keyboard that is versatile enough for gaming but isn't designed solely with gaming in mind. It can also be paired with up to three devices, whereas the Logitech can only pair with two. Each keyboard is available with clicky, tactile, and linear low-profile switches. The Logitech is also available in a TKL size.

The Keychron K1 and the Keychron K3 (Version 2) are both low-profile mechanical keyboards. The K1 comes in a TKL form factor, while the K3 V2 is a compact 75% board. They perform very similarly, but the K3 V2 has two incline settings for better ergonomics, and it's available with more switch styles and options. Also, the K3 V2 has a hot-swappable variant.

The Keychron K1 and the Keychron K8 are both wireless TenKeyLess keyboards with similar features. The main difference is that the K1 uses low-profile switches, whereas the K8 uses standard switches. The K8 has slightly lower latency, but not by much. Neither have customization software to change the backlighting or to set macros.

The Keychron K1 and the Ducky One 2 are two very different keyboards. The Keychron has a smaller, TenKeyLess layout and can be used wired or wirelessly via Bluetooth. You can connect it with up to three different devices at the same time, making it more versatile. It also has slightly better build quality and ergonomics and comes with full RGB backlighting. On the other hand, the Ducky is available in many different variants, with different colors, different backlighting options, and a wide variety of Cherry MX switches. It also has macro-programmable keys and better latency, which some people may prefer over Keychron's versatility.

The Keychron K1 and the Keychron K6 are both well-built, mechanical keyboards with RGB backlighting and multi-device pairing capabilities. The main difference between them is their switches: the K1 features low-profile switches and the K6 has standard ones. Also, if you play video games often, the K6 may be a better choice due to its much lower latency over both a wired connection and Bluetooth.

The Keychron K1 and the Keychron K7 are comparable wireless keyboards, but the K1 has more keys. The K1 is a TenKeyLess board with a dedicated F-row, spaced-out navigation keys, and a Control button on the right side. On the other hand, the K7 is a 65% board with two incline settings, while the K1 doesn't have any incline options. The K7 lacks the right Control key because of its second Fn button. Both boards are available with Gateron Low Profile, but only the K7 is available with Keychron Low Profile Optical switches and in a hot-swappable version.

The Keychron C2 and the Keychron K1 are both mechanical keyboards with significant differences. The C2 is a wired, full-sized keyboard with Gateron Red, Blue, or Brown switches. It's also available in a hot-swappable version. The K1 is a wireless TKL keyboard with low-profile Gateron Red, Blue, or Brown switches and a shorter-pre travel distance that's better suited for gaming. It connects via a USB receiver or Bluetooth, and it can pair wirelessly with up to three devices.

This is a TenKeyLess (80%) keyboard that lacks a Numpad but still includes a 'Print Screen', 'Insert', and two unique buttons for Cortana and Siri. If you like low-profile switches but want something even more compact, the Keychron K3 is a good option.

It has a great build quality. While there's some plastic on the sides, it's largely made of aluminum, which prevents any noticeable flex. Unfortunately, the flat keycaps are made of ABS plastic and are noticeably slippery.

This keyboard has decent ergonomics. Despite having no incline settings or wrist rest, its low profile is overall quite comfortable, with only minor fatigue being felt. However, if you want a more compact low-profile keyboard with two incline settings, check out the Keychron K7.

This keyboard has outstanding RGB backlighting. While there's no companion software, there's a handy customization button on the top right-hand side, where you can modify the pre-programmed effects and colors. It's good at color mixing since you don't see too many other colors when setting the backlighting to white.

It comes with a detachable USB-C cable that feels cheap and wobbles in the keyboard port.

The Keychron K1 has wireless Bluetooth support. It has a built-in rechargeable battery. It can be paired with up to three different devices at once and switching between them is done by sliding a button on the top of the board.

The Keychron K1 doesn't have too many extra features. There are media hotkeys and buttons to summon Siri or Cortana, but we couldn't get them to pop up. Also, there are no macro-programmable keys.

Typing on this keyboard is decent. The Gateron Low Profile Red switches on our unit provide linear feedback. Since the ABS keycaps are slippery, typos are more prevalent. Also, the lack of any incline settings and the taller-than-normal profile for this design resulted in some minor fatigue. If you don't want Red switches, you can get it with loud and clicky Gateron Low Profile Blue switches. The keys aren't as well-spaced as the Apple Magic Keyboard 2017, but if you're a fan of mechanical switches, it's a decent choice.

The latency on the Keychron K1 is decent over a wired connection and shouldn't be noticeable to most people, but it may not be ideal for competitive gaming. If you use the keyboard over Bluetooth, the latency is very high.

Unfortunately, there's no customization software available for this keyboard. Keychron lists some third-party options in their user manual, but they're not officially supported, and we haven't tested them.

The Keychron K1 has very good compatibility options. There are a few issues on each operating system that prevent it from being fully compatible. Most of these issues have to do with function keys not working, like the Cortana button not working on Windows, Siri not working on macOS, and F1 and F2 not working on both. There's a 'Print Screen' button, but that only works on Windows.