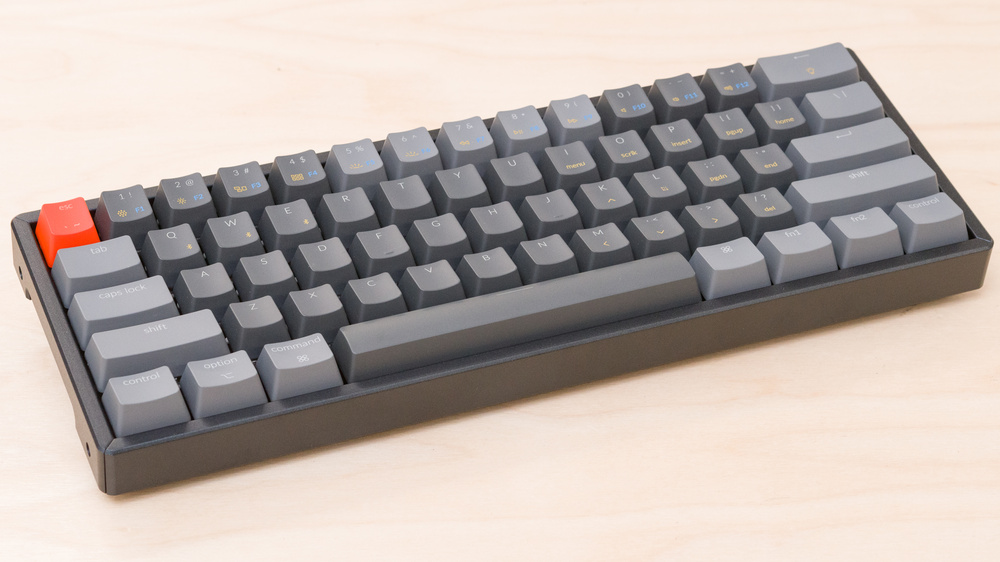 The Keychron K12 is Keychron's first 60% compact board. This wireless, mechanical board can pair with up to three devices at once via Bluetooth, making it a good choice if you tend to work on more than one device at a time. It feels very well-built, with a plastic chassis and an aluminum frame, and all of its keys feel stable. It's available in several Gateron and proprietary switches, including Keychron Lava switches, and we tested the Gateron Brown switches, which provide tactile feedback and feel light overall. Unfortunately, it has a high profile and doesn't come with a wrist rest, meaning you may feel wrist fatigue after long periods of use. Also, it uses ABS keycaps, which are prone to developing shine from finger oils.

The Keychron K12 is good for gaming, but it isn't designed for this use. It has RGB backlighting and decently low latency, although it isn't as low as other options. The Gateron Brown switches on our unit feel light and fairly responsive, although the pre-travel may be too high for gaming. Unfortunately, you can't set macros, which may be annoying to some gamers. Also, the high profile combined with the lack of a wrist rest may cause some wrist strain.

The Keychron K12 is good for use with mobile devices and tablets. You can pair it with up to three devices at once via Bluetooth, and it's compatible with many mobile operating systems, although the F3 and F4 keys don't work on iOS, iPadOS, and Android. It's very compact, but it's quite tall and heavy, which may not be ideal if you intend to travel with it.

The Keychron K12 is good for office use, but its high profile may cause wrist strain since it doesn't come with a wrist rest. That said, it feels very well-built with its aluminum frame and plastic chassis, and the Gateron Brown switches on our unit are quiet to type on. It also comes with different switches if you prefer a different feel.

The Keychron K12 is good for programming. It feels well-built, with a sturdy aluminum frame and plastic chassis. The Gateron Brown switches on our unit provide nice tactile feedback, and they feel light overall. You can use it either wired or wirelessly, and you can pair it with up to three devices at once via Bluetooth. Unfortunately, its high profile may cause some wrist fatigue since it doesn't come with a wrist rest. Also, you can't set any macros, which may be annoying to some.

The Keychron K12 is okay for a home theater setup. It has RGB backlighting, media hotkeys, and Bluetooth support, but unfortunately, it doesn't have a built-in trackpad or a volume control wheel.

If you have a variant that doesn't correspond to our review, let us know in the discussions, and we'll update it.

The Keychron K12 is Keychron's first 60% compact board. Like the other Keychrons we tested, there's no proprietary customization software, so you can't easily set macros, customize the RGB backlighting, or save settings to onboard memory. It's a decent board if you want something compact to type with and pair with other devices via Bluetooth, but it lacks the ergonomics that some dedicated office boards have.

For other options, see our recommendations for the best mechanical keyboards, the best ergonomic keyboards, and the best keyboards for writers.

The Keychron K6 and the Keychron K12 are nearly identical wireless mechanical boards, but the K6 is a 65% compact, and the K12 is a 60% compact. The K6 has dedicated navigation keys, including arrow keys, which the K12 lacks. Also, the K6 has lower latency, making it a better choice for casual gaming than the K12.

The Keychron K8 and the Keychron K12 are similar wireless mechanical boards, but the K8 is a TenKeyLess size while the K12 is a 60% compact. Both have RGB backlighting and can pair with up to three devices at once. If you prefer having a dedicated F-row, dedicated navigation keys with arrow keys, the K8 is a better choice. It's available with Gateron and Keychron Optical Red, Blue, and Brown switches, and there's also a hot-swappable variant with Gateron switches. If you prefer a very compact board that doesn't take up much space, the K12 is a better choice. It comes with the same switch options as the K8, but it's also available with Keychron Mechanical switches, Keychron Optical Banana and Mint switches, and in a non-backlight variant.

The Keychron K3 and the Keychron K12 are both compact wireless keyboards, with different switch styles. If you like low-profile switches and prefer having a dedicated F-row and navigation keys, the K3 is a better choice. However, if you prefer standard-shaped switches and want your board to be as compact as possible, you should go with the K12.

The Keychron K4 is a 96% size board, while the Keychron K12 is a 60% compact board. The K4 has a Numpad and dedicated navigation keys. It's available with Gateron Red, Brown, Blue, and Yellow switches, as well as LK Optical Brown, Blue, and Red switches. On the other hand, the K12 is very compact and comes with more switch options, including Gateron, Keychron mechanical, and Keychron optical switches. Both boards have hot-swappable variants.

The Keychron C2 is a wired full-size board, while the Keychron K12 is a wireless 60% compact board. Both units we tested have tactile Gateron Brown switches, which provide feedback and don't require much force to actuate. If you need a dedicated Numpad and navigation keys, the C2 is a better choice. However, if you want something as compact as possible and want to pair with multiple devices, including mobile operating systems, the K12 is a better option.

The Logitech G613 LIGHTSPEED is a full-size gaming keyboard, while the Keychron K12 is a 60% compact office board. The Logitech has dedicated media keys, dedicated macro keys, extremely low latency, and proprietary software for quick and easy customizations. However, you can only use it wirelessly, and it's available with Romer-G Tactile switches only. The Keychron is smaller and doesn't take up much space, and comes with a variety of Gateron and Keychron mechanical or optical switches, as well as a hot-swappable variant. Also, it has RGB backlighting, unlike the Logitech that isn't backlit at all.

The Keychron K12 feels very well-built and doesn't flex, thanks to its solid plastic chassis and aluminum frame. The keys feel very stable, and while there's a bit of wobble, it's very minimal and isn't noticeable while typing. There are four rubber strips on the underside and one on each incline foot, and they do a good job of keeping the board in place. Unfortunately, its keycaps are ABS plastic, prone to develop shine from finger oils after long-term use. The build quality may differ if you get a variant without the aluminum frame. If you want a similar compact board with a better build quality and PBT keycaps, check out the Keychron Q4.

The Keychron K12 is a fairly tall board with two incline settings. Its high profile would likely be more comfortable with a wrist rest, but unfortunately, it doesn't come with one.

The Keychron K12 has fantastic RGB backlighting with individually-lit keycaps. You can cycle through the 18 different effects by using the Light Bulb key (FN1+Backspace). Unfortunately, it's only okay at color mixing, and white tends to look pink in some areas. If you don't like RGB backlighting, there are some variants with only white backlighting and with no backlighting at all.

The Keychron K12 comes with a USB-C to USB-C braided cable that feels good quality, but it's stiff.

It has a 4000mAh Rechargeable li-polymer battery that Keychron claims can last up to 240 hours with the backlighting off, but we don't test this. You can swap between the three paired devices by pressing Fn1 + Q, W, or E.

Like the other Keychron keyboards we tested, the Keychron K12 has two switches on its left side to switch between Bluetooth/Wired Mode and Windows/Mac Mode. The user manual mentions that you can use third-party software to remap the keys, but we haven't tested it.

Update 08/31/2021: Fixed a spelling mistake with the switch name in the test results.

The Gateron Brown switches on our unit feel very light and provide some tactile feedback. The pre-travel distance is long enough to help prevent typos from mishits. The board is also available with Gateron Red and Blue switches; Keychron Red, Blue, and Brown switches; and Keychron Optical Red, Blue, Brown, Mint, and Banana switches. There's also a hot-swappable variant, so you can install the switches you prefer.

The Keychron K12 provides a great typing experience. The keys are fairly stable and don't wobble while typing, and despite being a compact board, the keys are well-spaced out and don't feel cramped. The Gateron Brown switches on our unit provide nice tactile feedback, which helps you know when your key actuates. However, since the board is fairly tall and doesn't come with a wrist rest, you may feel some wrist strain after typing for a long time. The typing quality may differ depending on the switch type you get.

The Gateron Brown switches on our Keychron K12 unit are quiet to type on. However, the noise will differ if you get a different switch type.

The latency on the Keychron K12 is decent. While it may be a bit high for gaming, it should be responsive enough for office use.

The user manual mentions you can use third-party software to remap the keys, but we haven't tested it since it isn't proprietary. Keychron suggests Karabiner for Mac and SharpKeys for Windows.