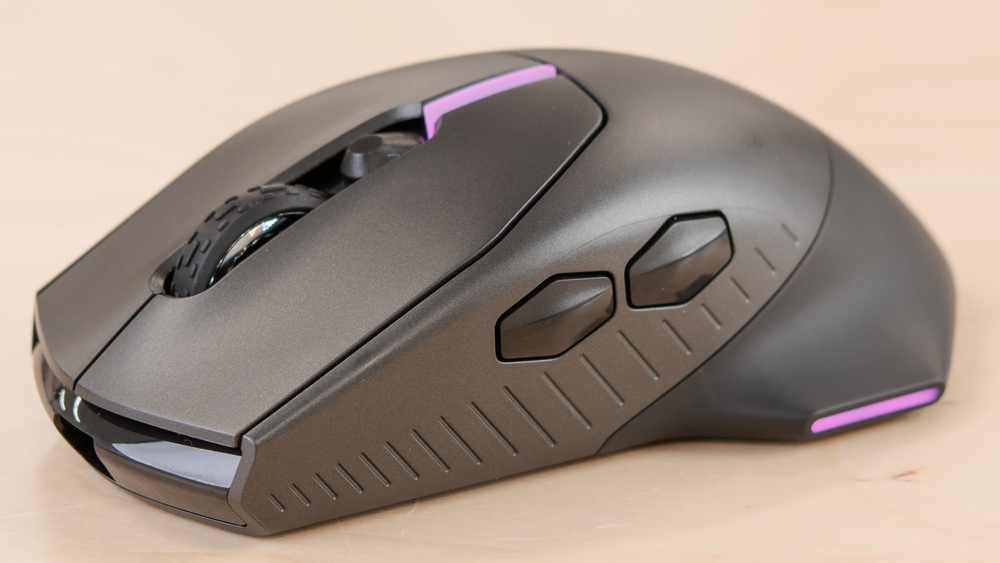 The Dell Alienware AW610M is a decent gaming mouse. It has a solid, ambidextrous design that feels quite comfortable and should be suitable for all hand sizes when using a palm grip. While it has a good, customizable CPI, unfortunately, it's quite heavy, which may not be ideal for everyone. Its unique wingtip design gives you a slight palm rest which is comfortable, though unfortunately, it means this mouse may be difficult to use with a fingertip grip.

The Dell Alienware AW610M is a good office mouse. Despite being marketed as a gaming mouse, it works best as an office mouse due to its comfortable and ergonomic design. It also feels quite well-built and should be able to withstand constant use. Unfortunately, its unique shape means it isn't recommended if you like to use fingertip grip.

The Dell Alienware AW610M is alright for FPS games. While it has a wide customizable CPI range and a fairly low click latency, unfortunately, it's quite heavy, which may not be great for FPS games. It also may not be the best choice for gamers who prefer fingertip grip, due to its unique wingtip design.

The Dell Alienware AW610M might be alright for MMOs, though there are better mice out there. Unlike dedicated MMO mice, it only has two additional side buttons, though they are both programmable, which is good. Its ambidextrous design should be quite comfortable for most people, though unfortunately, it can't be used with fingertip grip, unless you have very large hands.

The Dell Alienware AW610M is quite heavy and not recommended for ultra-light gaming. It's much heavier than mice designed for this, and its weight isn't customizable.

The Dell Alienware AW610M is decent for travel. Even though this mouse is quite bulky, it doesn't require a wire, and its USB receiver can be stored in the bottom of the mouse, making it easy to toss in a larger bag. It also feels quite well-built and should be able to withstand being bumped around in a bag without sustaining damage.

The Dell Alienware AW610M stands out because of its body shape. It has two large wingtips. It's a very big and heavy mouse that's better suited for larger hands. Although it's a gaming mouse, its dedicated software doesn't allow for much customization, which is disappointing. See our recommendations for the best mouse, the best wireless mouse, and the best wireless gaming mouse.

The Razer Viper Ultimate is a much better wireless gaming mouse than the Dell Alienware AW610M. The Razer is lighter, has a much better cable, a much lower click latency, better sensor performance, and more programmable buttons. While the Alienware is suitable for all hand sizes with a palm grip and larger hands for claw grip, the Razer is only usable with a fingertip grip if you have extra-large hands.

The Logitech G Pro Wireless is a much better gaming mouse than the Dell Alienware AW610M. The Logitech feels better-built, can be used by more hand sizes with more grip types, has significantly lower latency, and has more programmable buttons. On the other hand, the Alienware is more ergonomic and has more RGB lighting.

The Razer DeathAdder Elite is a slightly better gaming mouse than the Dell Alienware AW610M. It feels better built, can be used in all grip types with all but small hands, and has much lower latency. On the other hand, the AW610M can be used wired or wireless and has more RGB lighting.

The Anker High Precision Gaming Mouse is better than the Dell Alienware AW610M. The Anker mouse offers more programmable buttons and is also lighter. However, you can use the Alienware wirelessly while the Anker is wired-only. There are also more customization options available in the Anker software.

The Dell Alienware AW610M and the Dell Alienware AW510M share a distinctive body and wingtip palm rest. However, you can connect the AW610M wirelessly with its USB receiver. It also has a more consistent sensor. On the other hand, the AW510M is a wired-only mouse, but it's lighter and feels sturdier. It also has lower click latency and three additional buttons, including one more side button than the AW610M. Both mice are well-suited for nearly all hand sizes using a palm or claw grip and a fingertip grip for extra-large hands.

The ASUS ROG Chakram is a better FPS gaming mouse than the Dell Alienware AW610M, but the Alienware is likely a better option if you have small hands and use a palm grip. The ASUS has smoother-gliding feet, more programmable buttons, and its software lets you set multiple profiles. It also has a unique, programmable joystick on its left side. It offers more customization, letting you swap out the click switches and customize the RGB logo with your own design.

The Logitech MX Anywhere 3 is better for most uses than the Dell Alienware AW610M. The Logitech is lighter, has Bluetooth support, has an extra programmable button, and you can unlock the scroll wheel for infinite scrolling. However, the Alienware has a slot to store its USB receiver, comes with a better, braided cable, and it feels more comfortable overall.

The Dell Alienware AW610M shares the same shape as the Dell Alienware AW310M, but the AW610M performs slightly better overall. The AW610M has a rechargeable internal battery and connects either with its charging cable or wirelessly with a USB receiver. Performance-wise, it has a higher maximum CPI and a lower lift-off distance. It also has a switch on the underside that changes the scroll wheel between a 12 and 24-step mode. On the other hand, the AW310M uses an AA battery and only connects wirelessly with its USB receiver. It includes a cable, but it's only a wireless receiver extender. It also has a slightly lower click latency.

The Dell Alienware AW610M is a fairly unique looking gaming mouse. It isn't too flashy-looking and has four RGB lights, though they're all controlled as the same zone. The mouse has a symmetrical design and has silicone wingtips on either side to rest your hand on. 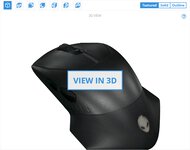 The Dell Alienware AW610M is a decently portable mouse. While the mouse itself is a bit on the larger side, it doesn't require a wire, and the USB receiver can be stored in the bottom of the mouse, making it easier to toss into a bag.

The Dell Alienware AW610M is a fairly heavy mouse with no weight customization options. If you want a similar mouse that's lighter, check out the Logitech G703 LIGHTSPEED with HERO Sensor.

The Dell Alienware AW610M is a sturdy mouse that feels quite well-built. The dense plastic of the mouse feels solid in the hand, and there are no creaks or squeaks while using the mouse. The mouse wheel wobbles a bit from side-to-side, and you can hear it when you shake the mouse, though we don't know if this will be an issue.

This mouse's ergonomics are very good. It has an ambidextrous design, though the side buttons are positioned on the left side. Due to its unique wingtip design, it's not the best choice for fingertip grip and lends itself best to the palm grip, which is recommended for all hand sizes. If you're interested in a similar mouse but with modular pieces that you can use to transform the mouse between a right or left-handed configuration, check out the HP OMEN Photon.

The Dell Alienware AW610M is great for palm grip due to its comfortable wingtip design. Even though the mouse looks quite large, it's comfortable in this grip for all hand sizes, and even those with smaller hands should have no problem reaching all the buttons.

The Dell Alienware AW610M can be used with claw grip for everyone except those with small hands, as it may be difficult to comfortably reach the buttons.

Due to its unique design, the Dell Alienware AW610M isn't recommended for fingertip grip except for those with very large hands. The rear wingtips will likely get in the way when trying to use this grip.

The Dell Alienware AW610M is a wireless mouse that comes with a USB dongle to connect the mouse wirelessly to the PC. It also comes with an adapter to attach to the included micro-USB cable to act as an extension cable for the dongle. For a wireless mouse that also supports Bluetooth, check out the ASUS ROG Gladius II Wireless. Or, for a mouse that supports Bluetooth and wireless charging with Qi standard devices, check out the HyperX Pulsefire Dart.

The included micro-USB cable is decent quality, though it feels slightly rigid and tends to curl up. The mouse can be used via a wired connection when plugged into your PC with the USB cable, or you can also use the USB cable as an extension by attaching the included adapter, great if your desktop is far away and you need to place your USB dongle closer to your mouse.

The Dell Alienware AW610M has two additional side buttons which, along with the wheel button click, are programmable via Alienware's software. Unfortunately, the side buttons can be a bit difficult to press as they sit almost flush to the mouse.

The mouse wheel is an incremented scroll wheel, which feels quite typical for a gaming mouse. While there's no way to unlock the wheel for infinite scroll, there's a button on the bottom of the mouse to change your scroll speed between low and high.

The Dell Alienware AW610M's click latency is quite good, both wired and wireless, and it's unlikely that there will be noticeable lag for most people.

The Dell Alienware Command Center is a decent software that can only be installed on Windows PCs. While it gives some basic customization options, unfortunately, it isn't quite as robust as some of the competition's companion utilities. It's worth noting that Command Center is the same software Alienware offers to customize their PCs and doesn't seem to have as much focus on accessory control.

This mouse is compatible with both Windows and macOS, though you have no customization options on macOS as the software isn't compatible. The additional buttons work on their default setting out-of-the-box, but if you customize the buttons on Windows and move the mouse to Mac, the buttons will no longer function.