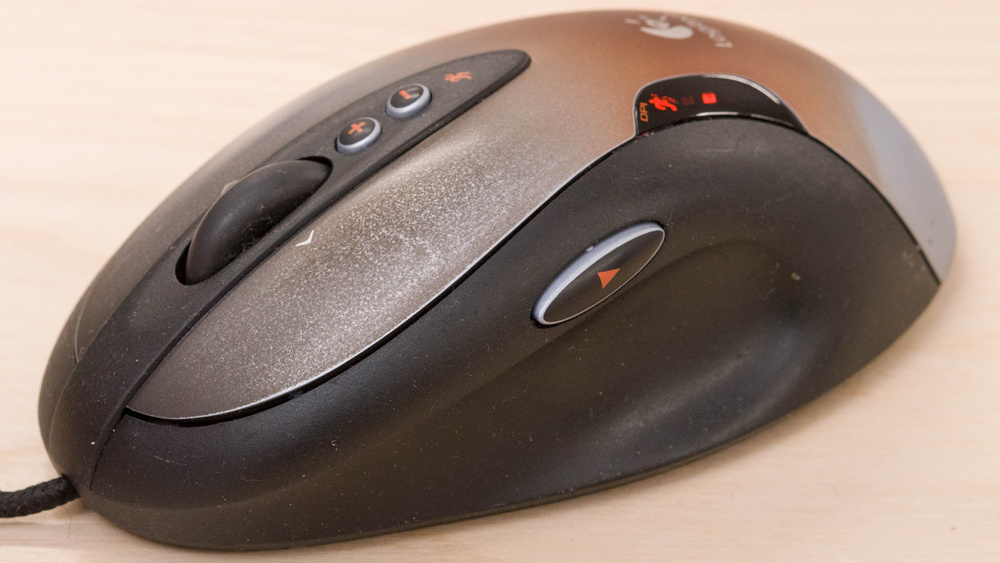 The Logitech G5 is one of Logitech's first gaming mice. It's fairly heavy, and it has a slot on the underside that holds a weight cartridge, letting you customize both the weight and its distribution. While its sensor performance isn't as good as newer mice on the current market, it was impressive when it was released, with a wider CPI range next to Logitech's older models. However, its sensor is fairly inconsistent and inaccurate, the minimum lift-off distance is high, and its maximum CPI range isn't as high as newer mice.

Note: Since this mouse is no longer available brand new, we bought our unit used. While this means that some of the scores may be affected, it gives us a better idea of how this mouse performs after long-term use, and it allows us to add the shape to our 3D tool.

The Logitech G5 is okay for office use, but it isn't designed for this. It isn't as ergonomic as dedicated office mice, but it has a thumb rest on its left side that should feel comfortable for right-handed users. You can remap almost all of its buttons through the Logitech SetPoint software, which is available on Windows only. Unfortunately, while it feels well-built, the side buttons feel squishy, and the rubberized sides get sticky over time. Also, the scroll wheel can't unlock for free scrolling, but it does have L/R tilts.

The Logitech G5 is decent for FPS gaming. It has low click latency, smooth-gliding mouse feet, a low minimum CPI, and a set CPI that you can adjust in increments of 50. Unfortunately, it's quite heavy, and its braided cable isn't very flexible. While it feels well-built, the buttons feel squishy, and the rubberized sides get sticky over time. Also, the sensor is fairly inconsistent and inaccurate, and it tends to undershoot the set CPI by a lot when moving the mouse fast.

The Logitech G5 is okay for MMO gaming, but it doesn't have nearly as many side buttons as dedicated MMO mice do. However, you can remap almost all of the buttons it does have through the Logitech SetPoint software, which is available on Windows only. It has low click latency, a low minimum CPI, and you can adjust the set CPI in increments of 50. Also, it comes with extra weights and a weight cartridge so you can adjust the weight and its distribution. Unfortunately, its braided cable isn't very flexible, and its minimum lift-off distance is high.

The Logitech G5 is an unremarkable option for fans of ultra-light mice. While it has low click latency, a high maximum polling rate, and excellent mouse feet, it's quite heavy, and its cable isn't very flexible, so it may catch onto items on your desk. Its sensor is fairly inconsistent and inaccurate, and it tends to undershoot the set CPI by a lot when moving the mouse fast. On the bright side, it feels well-built, but the buttons feel a bit squishy, and the rubberized sides get sticky over time.

The Logitech G5 is bad for travel, but it isn't intended for this use. Since it's a wired mouse, its cable may be cumbersome when working in tight spaces like buses, trains, or planes.

The Logitech G5 was one of Logitech's first gaming mice and was intended to replace the Logitech G MX518. However, many gamers preferred the MX518's second side button, which the G5 lacked. Two years later, Logitech released the Logitech G5 Laser, a nearly identical mouse with two side buttons and a new color pattern. The G5 has a removable weight cartridge that lets you adjust the mouse's weight and its distribution; while the Logitech has done away with the cartridge, some mice like the Logitech G502 HERO still come with extra weights.

For other options, see our recommendations for the best gaming mouse, the best wireless mouse, and the best Logitech mouse.

The Logitech G MX518 Legendary and the Logitech G5 have the same shape and size. The MX518 Legendary is a refresh of the original MX518 with an improved sensor, so unsurprisingly, its CPI range is much wider than the G5. It also has a lower lift-off distance, a more consistent sensor, onboard memory, and an extra side button.

The Logitech G PRO X SUPERLIGHT is a better gaming mouse than the Logitech G5. The SUPERLIGHT is much newer, and it has an LED sensor with a wider CPI range, a much lower lift-off distance, and a much more consistent sensor. It's also extremely lightweight, can be used wirelessly and wired, and its click latency is lower. It uses Logitech's more recent customization software, which is compatible with macOS.

The Logitech G502 HERO and the Logitech G5 are wired gaming mice; however, the G502 HERO performs much better. The G502 HERO has a wider CPI range, a more consistent sensor, and a much lower lift-off distance. It also has onboard memory, and the G HUB software is available on both Windows and macOS. It also has significantly more buttons, including the option to assign a G-Shift button to give a second customization layer, and its scroll wheel unlocks for free scrolling.

The Razer Viper Mini is a better wired gaming mouse than the Logitech G5. The Razer is newer and has a LED sensor with a wider CPI range, a lower lift-off distance, and much lower click latency. The Razer also has an extra button on its side and onboard memory. Because of its small form, it's best-suited for a fingertip grip, and only people with smaller hands will be comfortable with a palm or claw grip. Comparatively, the Logitech is better suited for larger hands.

The GLORIOUS Model D is a better wired gaming mouse than the Logitech G5. The Logitech is one of their first gaming mice. It's fairly heavy and comes with a weight cartridge with extra weights, and it only has one side button. On the other hand, the GLORIOUS is an ultra-light mouse with a honeycomb design, two buttons on its left side, and many RGB zones. It also has a wider CPI range, a lower lift-off distance, and onboard memory.

The Logitech G305 LIGHTSPEED and the Logitech G5 are both gaming mice but with very different designs. The Logitech G5 is a right-handed, wired mouse with only one side button on its left. It's one of Logitech's first gaming mice, and it includes a weight cartridge with extra weights. On the other hand, the G305 LIGHTSPEED is a small, ambidextrous mouse that can only be used wirelessly and uses a single AA battery for power. It has lower click latency and an updated sensor with a wider CPI range and a much lower lift-off distance.

For another mouse with a similar shape, check out the Nixeus REVEL Fit. 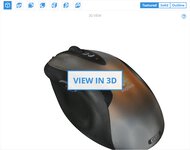 Since we bought our unit used, the build quality score doesn't reflect the score a new mouse would receive. However, because it's an old mouse, we can see that the rubberized sides become sticky after long-term use, so this negatively affected our score.

Since we bought our unit used, the cable is quite damaged due to age, making it difficult to compare it fairly to our other mice. However, it isn't very flexible and seems to retain packaging kinks.