Driven by data, run by a passionate team of engineers, testers, technical writers, developers, and more.
We are hiring!
Black Friday deal: The Razer Viper V2 Pro has dropped in price by $25 on Amazon.com. See all Mouse deals. 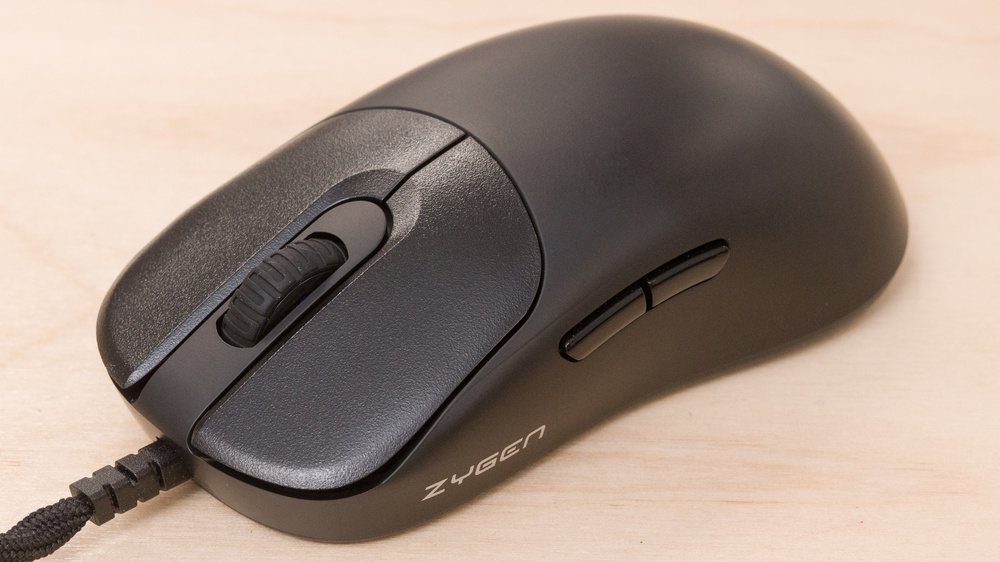 The Vaxee NP-01S is a straightforward wired gaming mouse that shares the same right-handed shape as the Vaxee ZYGEN NP-01, but is smaller. It has a smooth matte black finish on most of its body and a textured matte finish on the left- and right-click buttons. It feels fairly well-built, with a flexible paracord-like cable and smooth-gliding mouse feet, and it's lightweight, thanks to its smaller size. Performance-wise, it has a very low lift-off distance and a low click latency. Unfortunately, you can't manually adjust the CPI, and you can only cycle between four preset settings. Also, its sensor is somewhat inconsistent and inaccurate, and it undershoots the set CPI a lot for fast and slow movements.

The Vaxee NP-01S is mediocre for office use. It feels fairly well-built, and it has a right-handed shape suitable with any grip type for almost all hand sizes. Only people with extra-large hands may feel that the mouse is too small for a palm grip. Unfortunately, you can't reprogram any of its buttons since there's no customization software. Also, its scroll wheel lacks L/R tilt inputs and a free-scrolling feature.

The Vaxee NP-01S is very good for FPS gaming. It has a low click latency and a very low lift-off distance. Also, it's quite lightweight, with smooth-gliding mouse feet and a flexible paracord-like cable. Unfortunately, its sensor is somewhat inconsistent and inaccurate. Also, it lacks customization software, so you can't reprogram any of the buttons without using third-party software, though we don't test this. There are only four preset CPI settings to choose from using a button on the underside.

The Vaxee NP-01S is unremarkable for MMO gaming. It doesn't have as many buttons as dedicated MMO mice, and since there's no customization software, you can't reprogram any of the buttons. There are also only four preset CPI settings to cycle through. While you may be able to use third-party software to reprogram buttons, this isn't something we test. On the bright side, it has a very low lift-off distance and low click latency.

The Vaxee NP-01S is an excellent option for fans of ultra-light gaming mice. It's quite lightweight, and it has a low click latency. Also, it has smooth-gliding mouse feet and a flexible paracord-like cable. You can cycle between four CPI presets with a button on the underside of the mouse. Unfortunately, its sensor is somewhat inconsistent and inaccurate.

The Vaxee NP-01S is inadequate for travel. It's a wired-only mouse, which may be annoying to use in small spaces like buses, trains, or planes. Also, it's fairly bulky, so it may not easily fit in most laptop cases.

We tested the Vaxee NP-01S in Matte Black, but it's also available in Glossy White. It's similar to the Vaxee ZYGEN NP-01 but smaller and lighter. You can see our unit's label here.

The Vaxee NP-01S is similar to the Vaxee NP-01, but the NP-01S is smaller and lighter. Like with the NP-01, you can't manually adjust the CPI, and you can only cycle between four preset settings via a button on the underside. Like the BenQ ZOWIE EC2 and other mice in its lineup, there's no RGB lighting and no customization software, but some people may prefer this more straightforward approach. Unfortunately, its sensor is somewhat inconsistent and inaccurate.

The Vaxee ZYGEN NP-01 and the Vaxee ZYGEN NP-01S are very similar straightforward gaming mice, but the NP-01S is smaller and lighter. Otherwise, the NP-01 feels better built since you can't actuate its side buttons by applying pressure to its body like you can on the NP-01S, and its sensor is slightly more consistent. Neither mouse has software, so you can't remap any of the buttons, and you can only cycle between four preset CPI settings.

The Endgame Gear XM1r and the Vaxee ZYGEN NP-01S are both similar lightweight, wired gaming mice, but the Vaxee has a right-handed shape. The Endgame Gear performs somewhat better overall and feels better-built. It also has a slightly more flexible cable and mouse feet that glide a bit more smoothly on mousepads and desks. Performance-wise, it also has a wider CPI range, lower click latency, and customization software, which the Vaxee lacks. Note that the Vaxee has a right-handed shape

The Razer Viper Mini and the Vaxee ZYGEN NP-01S are both wired gaming mice, but the Razer performs better overall and is significantly lighter. It has a lower click latency and a wider and adjustable CPI range, unlike the Vaxee that only lets you cycle between four preset settings. Also, it has software to reprogram all of its buttons, unlike the Vaxee. On the other hand, the Vaxee has a lower lift-off distance.

The Vaxee ZYGEN NP-01S and the BenQ ZOWIE EC2 have similar, straightforward shapes with no RGB lighting. Neither comes with customization software to reprogram the keys or adjust the settings, and you can only cycle through four CPI presets and three polling rates. However, you can also cycle between three debounce times on the Vaxee, and it also has a lower minimum lift-off distance and smoother-gliding mouse feet than the BenQ.

The Vaxee ZYGEN NP-01S and the BenQ ZOWIE EC3-C are both wired gaming mice with similar right-handed shapes. They're about the same size and weight, but the BenQ feels a bit more sturdy. Also, the BenQ's cable has an angled mouse end to help prevent drag. On the other hand, the Vaxee has better quality mouse feet and lower click latency. Both mice are suitable for most hand sizes using any grip type, but the Vaxee is more suitable for small hands using a fingertip grip.

The GLORIOUS Model O and the Vaxee ZYGEN NP-01S are both great wired gaming mice. The GLORIOUS has a honeycomb cutout design that makes it much lighter. Also, it has customizable RGB backlighting, a more flexible cable, a much higher maximum CPI with a CPI you can adjust in the customization software, and programmable buttons. On the other hand, the Vaxee is a straightforward model with a sturdier-feeling body and a lower lift-off distance.

The Vaxee NP-01S looks identical to the Vaxee ZYGEN NP-01, but it's slightly smaller. It's a straightforward mouse with no RGB lighting, with a "ZYGEN" logo written in white on the left side near the front. Most of the mouse has a smooth matte black finish, but the L/R click buttons have a rough texture, and the side buttons are glossy. We bought the Matte Black variant, but there's also a Glossy White variant. 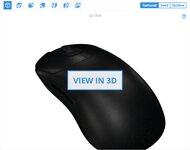 The Vaxee NP-01S feels well-built. Its plastic body feels solid, and there's no flex or creaking when you apply pressure to the mouse. You can actuate the buttons by squeezing the sides directly underneath the buttons. For a very similar mouse with much better build quality, check out the BenQ ZOWIE EC3-C.

—
8.0
Design
Comfort Of Use
Right-handed Yes
Left-handed No
Ambidextrous No
Coating Matte
Finger Rest No

It feels comfortable to use, and the buttons are well-placed and easy to reach. It's suitable for any grip type for almost all hand sizes.

People with extra-large hands may find the mouse too small to use with a palm grip because of its narrow and short body.

All hand sizes should feel comfortable using a claw grip.

All hand sizes should feel comfortable using a fingertip grip.

The paracord-like cable feels good quality. The part where the cable meets the mouse is slightly raised to help prevent drag on the mousepad.

The mouse feet glide smoothly on both mousepads and directly on desks, although there's a slight scratching sound when used on a desk.

The Vaxee NP-01S has only four CPI settings, which are color-coded: 400 (red), 800 (purple), 1600 (blue), and 3200 (red). The polling rate options are 125Hz, 500Hz, and 1000Hz. You can adjust the lift-off distance directly from the mouse using a combination of buttons. Unfortunately, the sensor is somewhat inconsistent and very inaccurate. It undershoots the set CPI by 10.63% during slow movements and 18.71% during fast movements.

You can't reprogram any of the buttons since there's no customization software. You can use third-party software, but this isn't something we test. There are three buttons on the underside of the mouse to let you cycle between four preset CPI settings, three polling rates, and three debounce time options, which adjust the time before a second mouse click can be registered. The debounce options are 2 ms, 4 ms, and 8 ms. If you're interested in a gaming mouse with similar performance and a dedicated CPI button on the top of the mouse, check out the Dream Machines DM1 FPS.

The Vaxee NP-01S's mouse wheel has very tactile, pronounced steps that feel precise. However, the scroll wheel is a bit loud and could be annoying to some people.

The Vaxee NP-01S's click latency is great and should feel responsive enough for most gamers.