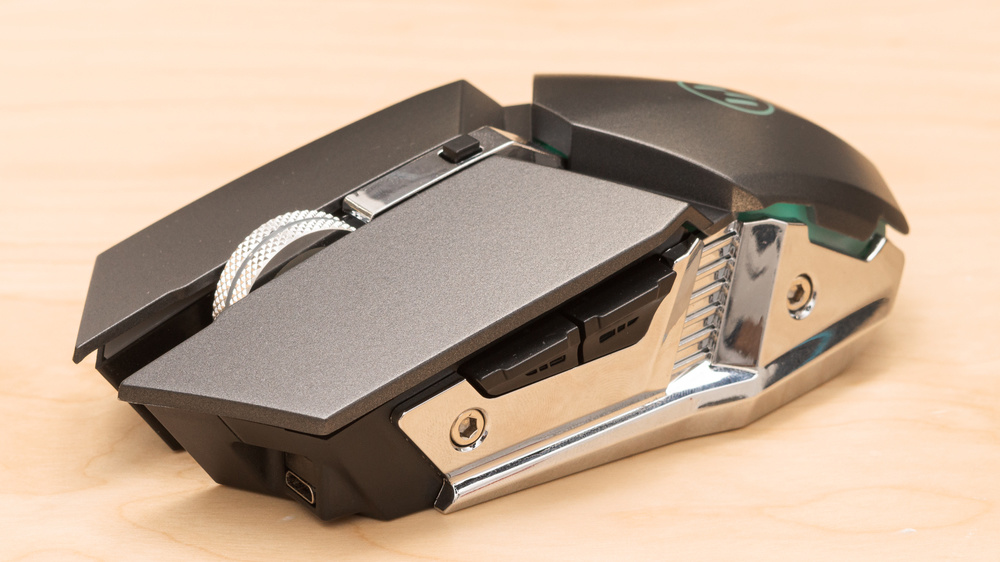 The Vegcoo C18 is an overall bad wireless gaming mouse. Its performance is mediocre, with a CPI setting stuck at 1400, a very high lift off distance, and a low 250Hz, non-customizable polling rate. Its wireless range is also very short, which greatly affects performance. The mouse wheel is wobbly and scratches on the right-click button. This RGB mouse also doesn't have any dedicated software and feels very cheap. The only good part of this mouse is its low click latency. Even at such an affordable price point, this mouse is a poor choice.

Sub-par for office. The Vegcoo C18 is a very bad mouse with mediocre performance and a very short wireless range. It's cheaply made and you can't modify its CPI or program any of its buttons.

Bad for MMO games. You can't program any of the Vegcoo C18's buttons, which are limited to begin with. This mouse also feels very cheap and its performance is mediocre. There are better dedicated MMO mice available.

Decent for traveling. The Vegcoo is fairly portable since you can put its receiver inside the mouse's body to use wirelessly. However, it has mediocre performance and there are better options than this cheap mouse.

The Vegcoo C18 is a very cheap wireless mouse that offers poor overall performance. It's also very hard to find it online. This mouse model seems to be made by various manufacturers. Our box says C18, while the mouse model is called the Q18 on the bottom side of the mouse. This is a very bad wireless gaming mouse and there are way better options available. See our recommendations for the best mice, the best gaming mice, and the best wireless gaming mice.

The Corsair GLAIVE PRO is a much better gaming mouse than the Vegcoo C18. The Corsair feels much better built, has a much better and more consistent sensor performance with a much wider adjustable CPI range, and is much more comfortable. On the other hand, the Vegcoo is wireless and has a surprisingly low click latency.

The Vegcoo C18 and the VicTsing Wireless Gaming Mouse are both disappointing wireless gaming mice. The Vegcoo is more comfortable for larger hands in both claw and fingertip grip and is rechargeable via Micro USB. On the other hand, the VicTsing feels much better built. The click latency of the Vegcoo is much lower than the VicTsing, and likely should be fine even for competitive gaming, but the VicTsing has an adjustable CPI. Unfortunately, neither of these mice have programmable buttons.

The Anker Gaming Mouse is better than the Vegcoo C18. Its performance is better, more consistent, and it's also lighter. It has access to dedicated software to customize its performance and reprogram its buttons. The Vegcoo is overall bad, and the Anker is a better budget option.

The Havit HV-MS760 is better than the Vegcoo C18. Although both are cheap mice, the Havit has better overall performance and a noticeably better build quality. The Havit also has swappable button panels and has access to dedicated software for customization options. There's no reason to get the Vegcoo over the Havit.

The Redragon M908 is a better gaming mouse than the Vegcoo C18. The Redragon has better and customizable performance and is noticeably better-built. The Vegcoo is wireless but is one of the worst mice we've tested and is not worth getting.

The Vegcoo C18 has a fairly futuristic look with space gray and chrome colors. It also has RGB lighting, which gives it an even more gaming-oriented style. However, you can't control the RGB lighting, and the mouse looks fairly cheap because of the materials used. 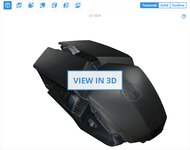 The mouse is fairly portable thanks to its wireless design. There's also a storage compartment for the receiver on the bottom side of the mouse.

The Vegcoo has terrible build quality. The plastic is very cheap, and the scroll wheel wobbles around a lot and scrapes on the right-click button when scrolling. The chrome side panels feel very cheap and scratch on the mousepad during use. The side buttons are also very loose. On the upside, the two main click buttons are silent and feel nice, but that's about it. It is so cheaply built that even the oldschool IBM PS/2 trackball mouse feels a lot more solid than the Vegcoo.

The Vegcoo is a fairly heavy mouse and there's no way of reducing the weight.

—
7.0
Design
Comfort Of Use
Right-handed No
Left-handed No
Ambidextrous Yes
Coating Glossy
Finger Rest No

The ergonomics aren't great. The mouse doesn't have grips and the plastic chrome side panels are slippery. It has an ambidextrous design that's suitable for both right-handed and left-handed people, although the side buttons are only on the left side.

Extra-large hands might find this mouse to be a bit short for them in palm grip, while the side buttons are too far forward for people with small hands.

The Vegcoo is too long for small hands and they'll have trouble reaching the side buttons. On the upside, using a claw grip with curled up fingers fixes the problem extra large hands could have with a palm grip.

This mouse is a bit too large for small hands to use in a fingertip grip.

The Vegcoo is a wireless-only mouse that connects to a dedicated receiver. However, the wireless range of this mouse is very short and its performance is noticeably impacted when slightly out of range.

The Vegcoo C18's cable is very bad. It's a charging-only cable and it's abnormally short. You basically can't use the mouse when charging, unless you have the perfect setup. Thankfully, this is a standard USB to micro-USB cable, so it should be easy to find a longer replacement.

The Vegcoo C18 has a few buttons, but none of them are programmable and their quality is sub-par. Although we think the top button is a CPI switch, ours doesn't do anything. The two main clicks are silent, on purpose, and they feel nice. However, the side buttons are very loose. You can also turn off the RGB with the power on/off switch on the underside of the mouse. If you're interested in a gaming mouse with two buttons behind the scroll wheel for adjusting the CPI, check out the DELUX Game Titan M626.

Surprisingly, the Vegcoo C18's click latency is very low. The mouse feels responsive when in the short range of the receiver.

Although the mouse has a scroll wheel, it's one of the worst we've tested so far. The increments are very soft and the wheel scrapes on the right-click button when using it. The scroll wheel is very loose and feels very cheaply made.

This mouse doesn't have any dedicated software for customization options.

Amazing compatibility for this mouse, as it works perfectly on both Windows and macOS.